As I have mentioned before, I have a hobby spreadsheet where I keep lots of different bits of data with all the formulas that I can think of, giving me numbers back out. The formula that is important for this post is how many small scale games I have played this year (4*) and it is too low for being over half the year in.
*although, I don't think the 4 is within the spirit of my aim
Then in a separate fact, I also added all the major battle dates from the same spreadsheet into a new calendar that I have then linked to my personal calendar, so that if at the end of a club night we aren't sure what to play the next week we can see what anniversaries are the next week and see if that inspires any games**. The reason I mention this now is that with the thought of having another 15mm game at some point soon, I noticed that the battle of Adrianople (Goths vs Romans) is in early August . . .
**which has inspired a big project rethink that might be something to do with the 25th October 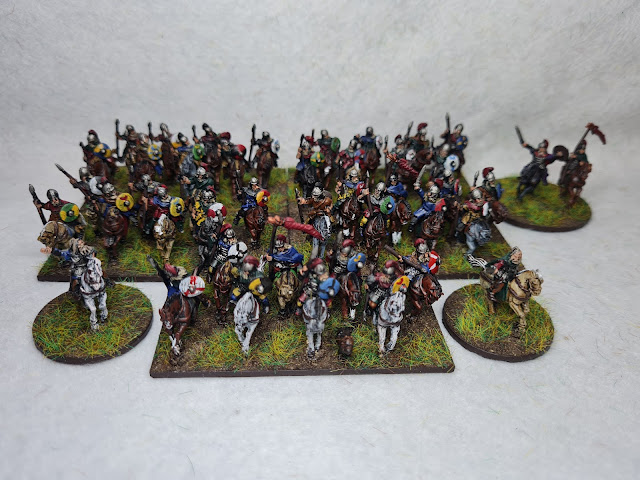 The first batch of figures up are the rest of my regular Gothic Cavalry, another 4 bases bringing my total up to 6 bases (48 mounted men). These are more Forged in Battle figures from my last big splurge on their site***. I've mixed in a few more horse colours this time as I have more in my repertoire but nothing exciting beyond that.
***Although, I have just seen they have a summer sale on 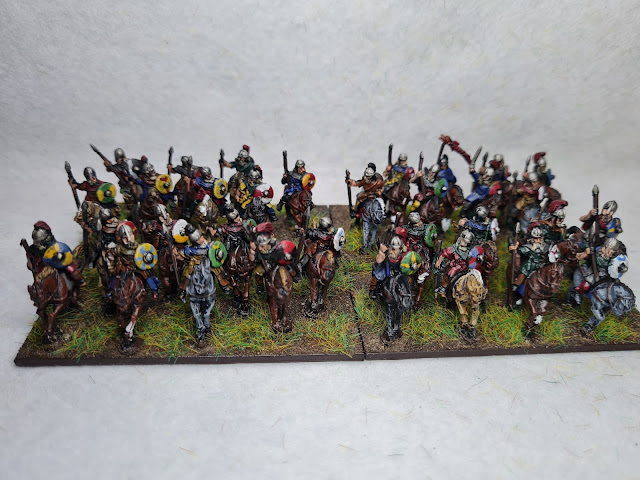 The second thing is a unit of Noble Cavalry and some commanders. The noble cavalry seem to be based on the same figures as the regulars with, I think, 1 extra rider sculpt(?) and chainmail on the torsos so I've added some white horses into this batch to try and make the easier to pick out on the table top as from 3 foot away, you can't tell the difference. 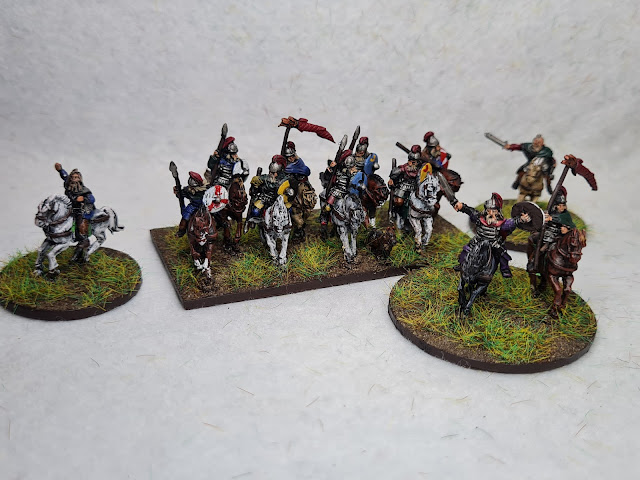 The commanders are all Forged in Battle as well and are mostly Germanic commanders from a few hundred years earlier, I just avoided ones that were obviously the wrong period. The general is Theodoric 1st himself, although, again, I doubt I'll actually be using the figure as himself.
Then I have some scenic bits for the project. The campsite is from Baueda and was bought in a semi-recent Magister Militant test order. I just wanted to try and bring a bit of life to the back of the table and I felt like the Goths would have some of that. 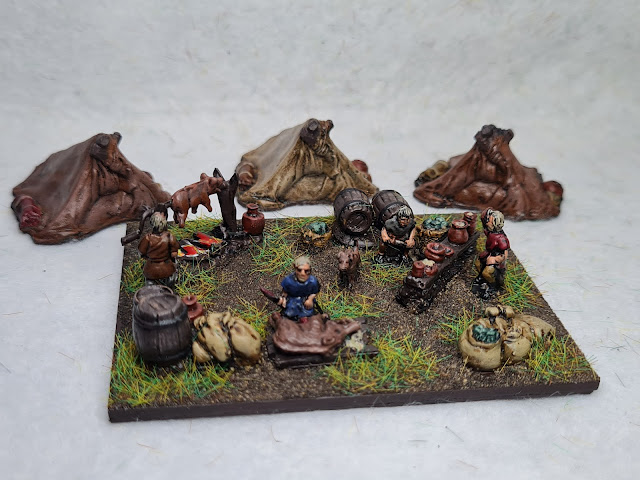 While the wagon is from Essex Miniatures and I'm not sure why I didn't paint it in my last big batch of 15mm wagons. 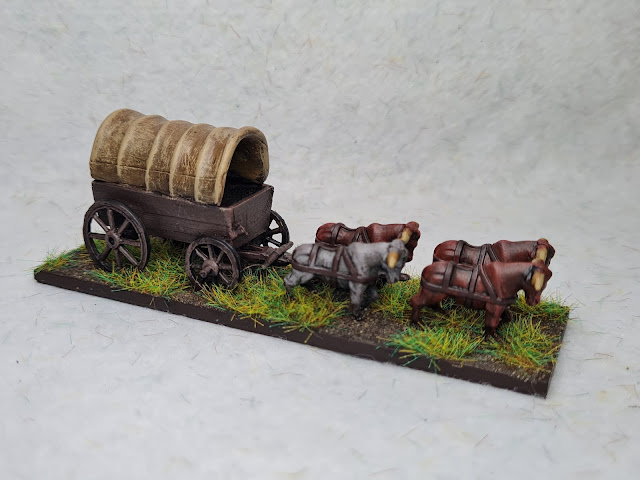 The vineyard was a test piece copied from Setting the Scene Volume 2. I probably need to add at least one more base of a similar size, but a double sized one would be better. 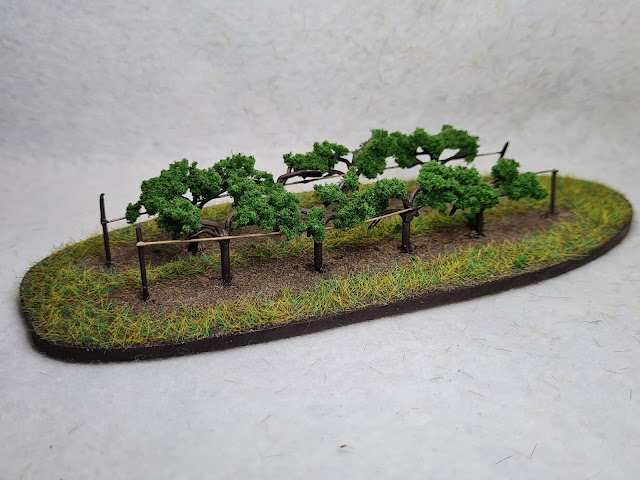 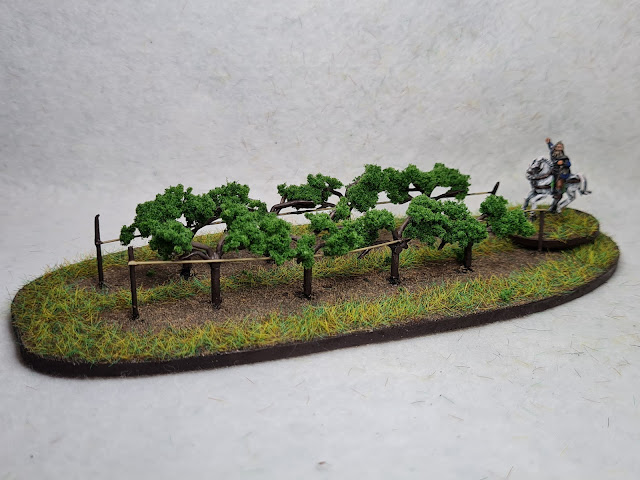 Figure for scale
The last things are two Alternative Armies 15mm War Mammoths with crew from Forged in Battle (extras from my other packs). I bought these in a sale on a bit of a whim when I was thinking about adding little fantasy bits to my historical armies. I'm sort of tempted to add one more if I do another order but for now they will do. They are mounted on half sized horde bases, so if I need standard base sizes, I can add them together as a unit. 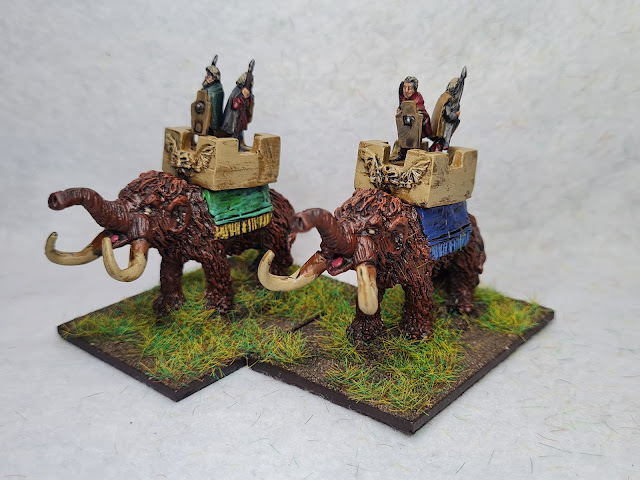