Firepower for the Sons of Horus

My first week and a bit in the new job and is safe to say that it is everything as knackering as I remember it being, with the hour drive's only redeeming feature being that I can catch up on a lot more podcasts. It does, however, mean that at this stage I've not touched a paint brush since my last post, with this post being for another squad that was actually painted before I started the job but that I hadn't done the decals for.
The squad in this post came about a couple of months ago while I was chatting to my mate Adam from the Legion of Lies podcast in which my list for the event he is running came up. One of the big things I have learnt about 30k is that as the general squad size is bigger for most armies, so you need to up your firepower, a tank that can happily kill 3-4 marines a turn in 40k is a big deal, in 30k it isn't even in your immediate list of things to worry about. So, while I own some great vehicles, I only own single copies of them, so I don't advantage of taking squadrons as a single choice which severely limits my effectiveness. Adam's advice was either buy more tanks, or drop them entirely and take troop mounted AT - so I went for the cheap option*.
While the two units don't look as similar as I would like, the idea is that they are a single squad split into combat units for tank killing purposes, hence the single model with a sgt's crest, however, they look so different it is going to be a hard sell.
*Also hoping that I might 'waste' some of
my opponent's AT points 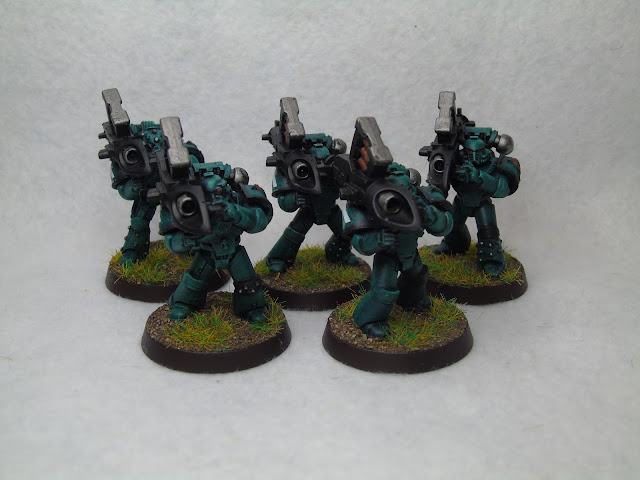 I am sure you have noticed that the missile launchers carried by the two units are different, this is because the first unit was built using the planned bits from the plastic set before I realised that it was cheaper to buy the underslung resin missile launchers from Forgeworld than it was to buy the 3 plastic ones I needed to do a full 10 men from bits sites or eBay. In hindsight, I much prefer the resin ones, but making the units match is a problem for the future. 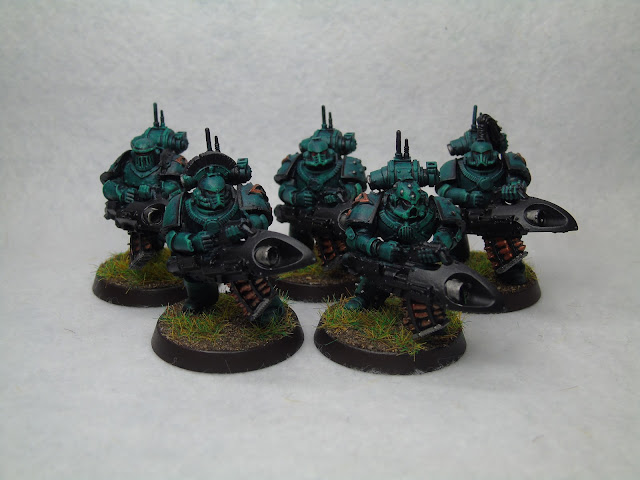