As much as the stuff going up on this blog has been a right mix of different things, the game I have been playing the most in recent weeks is still Sangin Skirmish and I noticed while playing on Friday that I hadn't updated my blog with the most recent bits of scenery. 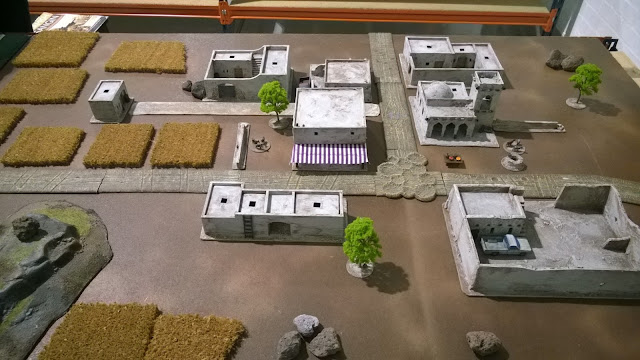 The board on Friday. 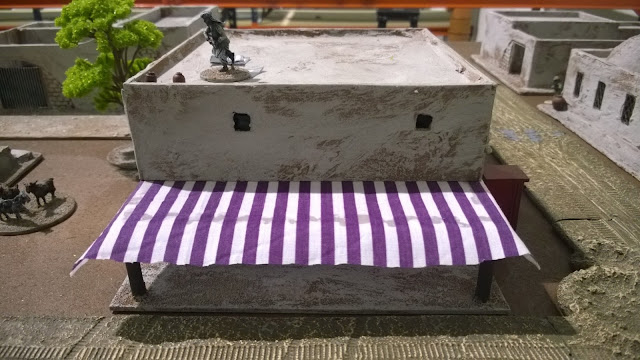 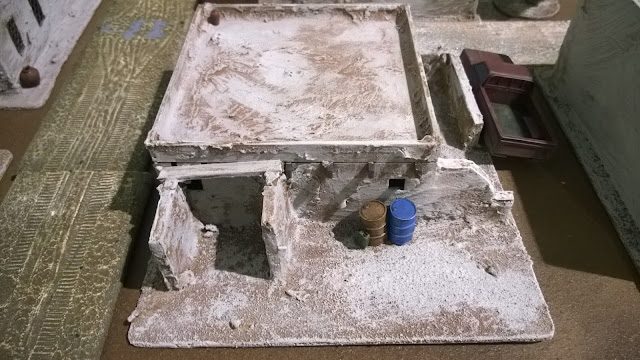 A rebased Timeline Miniatures with foamboard extensions.
I've still got a little bit of work to do on this one. 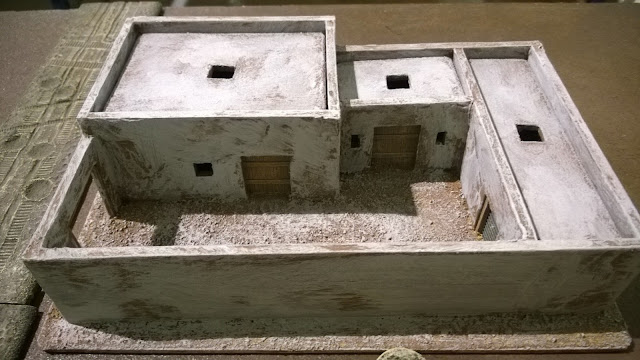 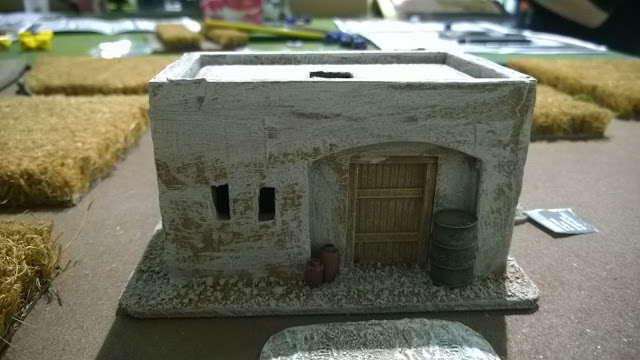 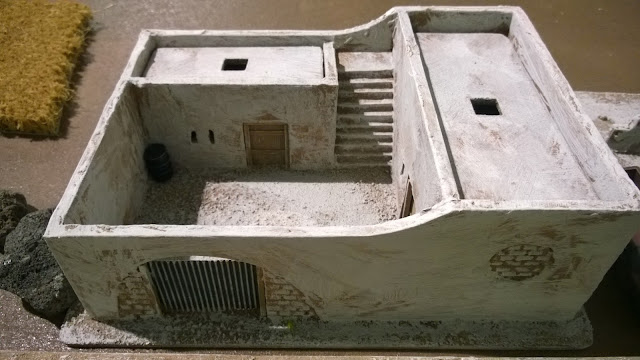 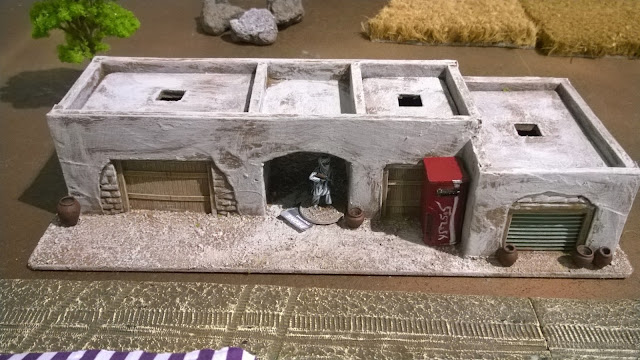 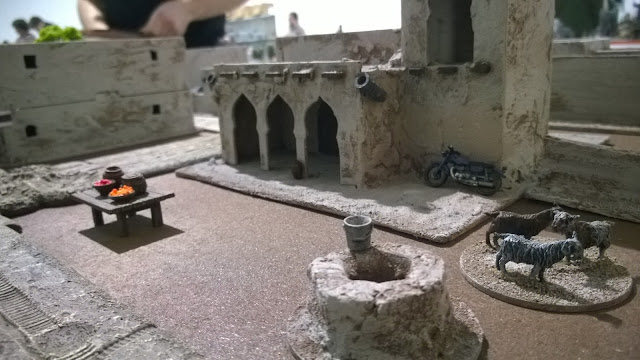 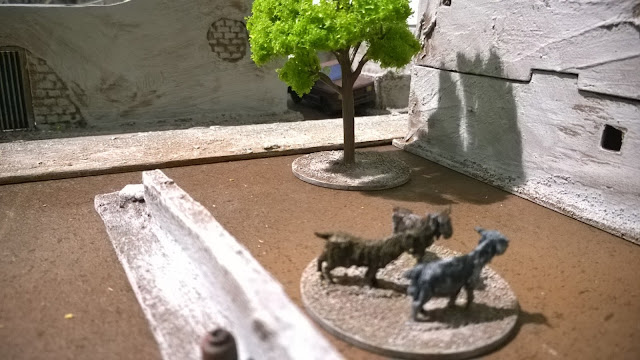 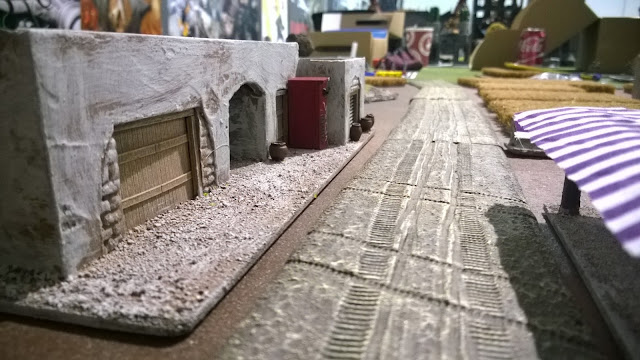 I have been looking to start populating my VBCW boards with more than just military personal and carts like these felt perfect to do that. I have always looked at these carts in the past, knowing they are about the right scale, but not being able to work out why they looked wrong, however, after seeing one in person it dawned on me, the horse was wrong.
A cheap buy on ebay, a civilian driver picked up from another shop and a carriage horse from Warbases picked up at Salute later and I had a project on my hands. 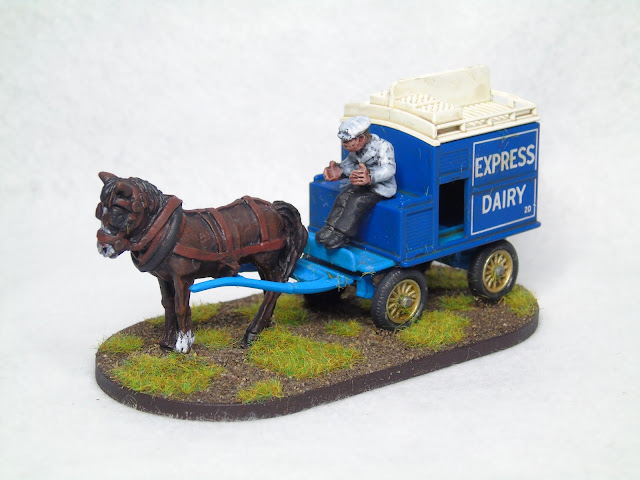 I've not done anything to the cart other than a quick ink wash to bring the detail out a little bit, the horse and drivers have been given a fairly basic paint job and put together I think it works. 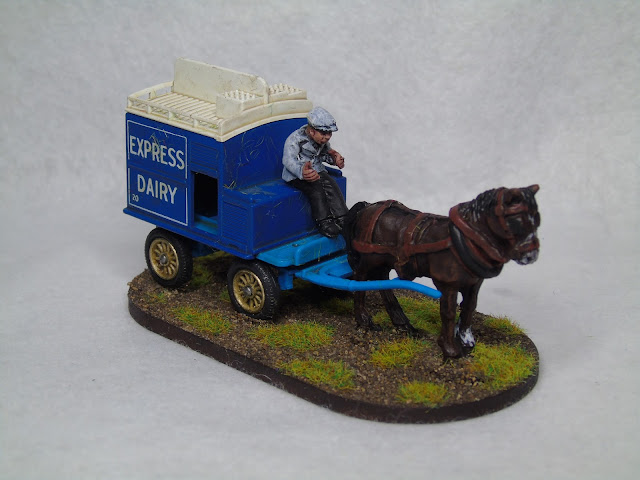 Carrying on my Arthurian theme, I managed to finish 2 more units just before Salute, but for some reason, I haven't managed to get time to sit down and put them up on here until now. So with no further ado. 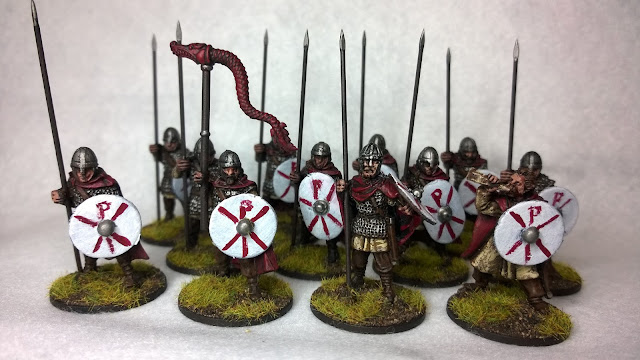 The second unit of foot serjeants. I have found a couple of units of these guys is a fairly solid wall that you can then build from with the rest of your force, so this second unit was a must. I've gone for an inverted colour scheme on the shields just to separate the 2 units. 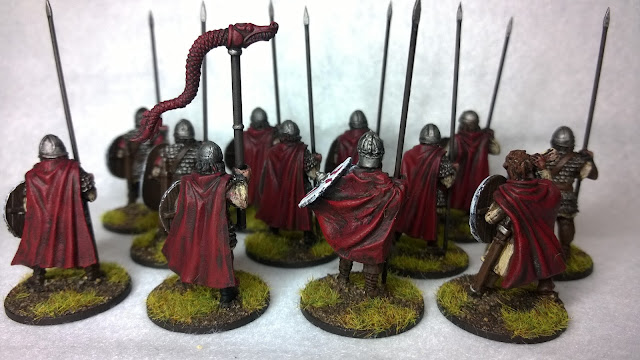 While shooting in Lion's Rampant isn't the most effective thing in the world it still pays to bring some to the party and, in this case, I have gone for a unit of basic archers. 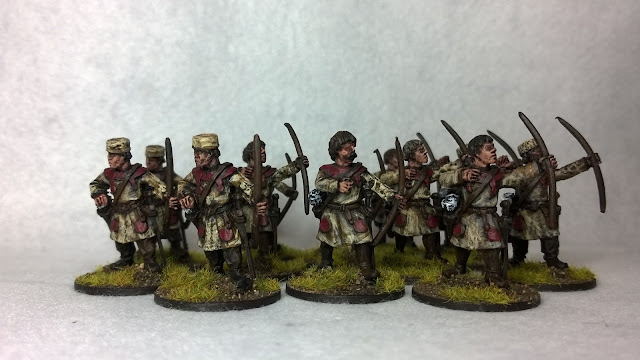 These are the bread and butter of my force, next it's time for the fun part, the men at arms.

Once and future king

Carrying on yet more ramifications from that exact same conversation a week ago and trying to get my painting numbers as far into the positive as I can before Salute in 2 days time (!), I have been going back through projects that have fallen by the wayside and trying to get them off of (and in some cases, onto in the first place) my painting table. The big one of these, for me, is my planned Romano-British - Age of Arthur - army.
The first thing to say at this point is that I am a massive Bernard Cornwell fan, I am aware that he only has 1 character that he just keeps putting into different historical contexts but I like that guy and I like the way the author writes, so I am happy to overlook this fact. This does mean, however, if I ever do Napoleonics (I have Sharpe Practise 2 on pre-order, so there is a risk) that I will end up with the South-Essex on my desk (although this is helped by the fact I live in the south of Essex anyway), years ago I built a guy who was supposed to be Uthred (and I am pleased to say he looked nothing like the guy from the tv series) and lastly, that I was always going to try and do Derfel Cadarn and his wolftails.
If you are unfamiliar with Derfel, he is the son of a Saxon noble (trying not to spoil it too much for anyone who haven't read the stories) who is raised as a Britain by Merlin and later joins Arthur and becomes an important warlord (and later a monk but that's not important for this post) from the Warlord series of books about King Arthur.
A while back I bought a regiment pack and a couple of packs of late Roman archers, from Artizan and Crusader respectively, with the aim of doing a Lion's Rampant force of Derfel's wolftails, but the more I looked at the figures and the more I thought it over I decided I didn't really want to do that, but I didn't know what I wanted to do instead, so into a box they went and that was that. Until that conversation where something just clicked in my head and this is the result. 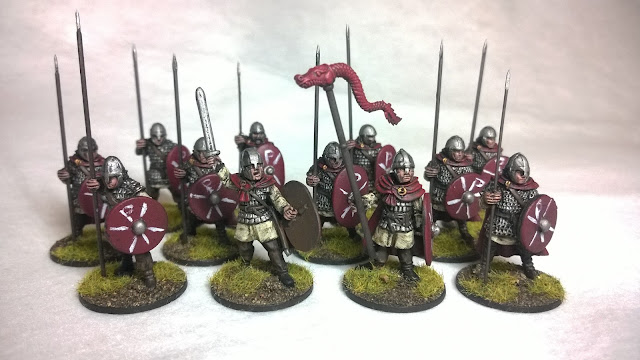 I have gone for, what I see in my head, as the classic late Roman look, including the Draco (which I am aware is a cavalry banner but I like it (thanks Neil)) and I am pleased with the result. The spears are my first real foray into wire spears and I have stabbed myself a few times now. 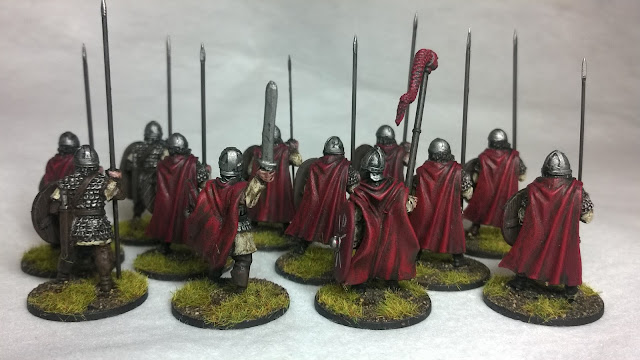 I have got the unit of archers nearly finished and the next unit of spears started, so hopefully this won't be the last post before Salute.

The same conversation that reminded me to finish painting a couple of units I had put aside for Dragon's Rampant, also reminded the same mate and me that we had promised to have a game of Battlefleet Gothic after I finished my fleet way back in this post: Space Marines for BFG.

To keep it simple we both picked the same faction for our fleets, Space Marines in this case, and put together our lists. I went with more capital ships, while he went with more of an emphasis on escorts, this making our core fleets really similar; we both had a Battlebarge, 2 Strike cruisers and a unit of Cobras, but I had an extra Strike cruiser to his unit of Nova Class ships.
The other big difference were our tactics, I went as a solid block in the middle hoping to smash straight through his lines, while he tried to be a bit cleverer, with a flanking move on each side. 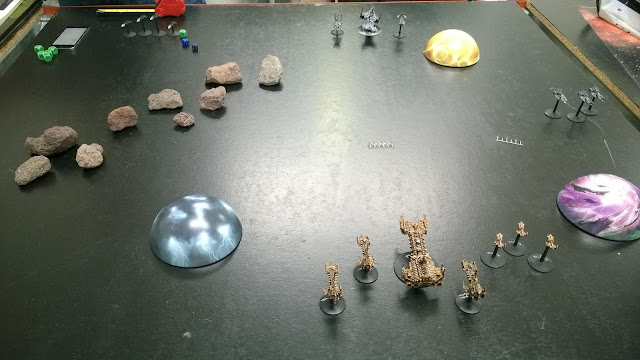 Keeping with my hammer approach to tactics, my first move was straight forward firing all my torpedoes at the closest targets, there was no way these would hit but I wanted to make him have to start thinking from his very first turn. 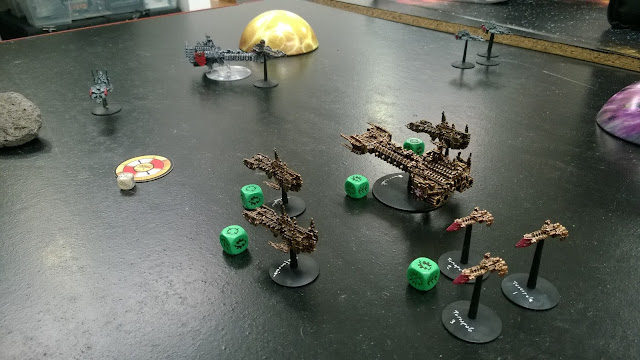 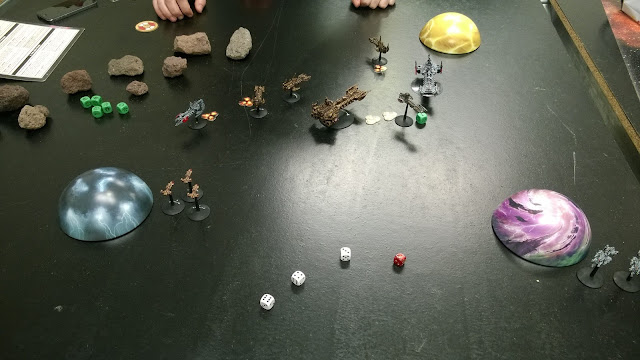 The first salvo or two we both fired brought home just how brutal this game can be, both of us losing a Strike cruiser early on and him losing one of his Nova class ships. We learned at this point just how much firepower a Battlebarge can put out and the answer is staggering. 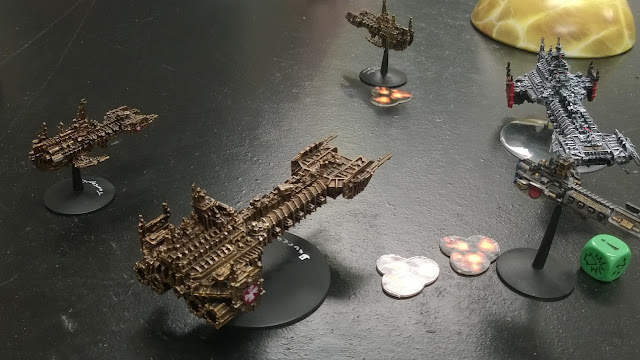 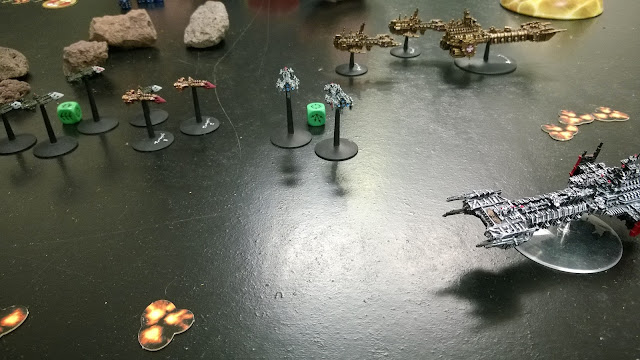 After the initial straight line jousting, we both had to think about coming about, I had the upper hand at this point but in our struggles to turn our capital ships quickly enough his escorts came into play taking out nearly all of my escort squadron and taking out another of my Strike cruisers. 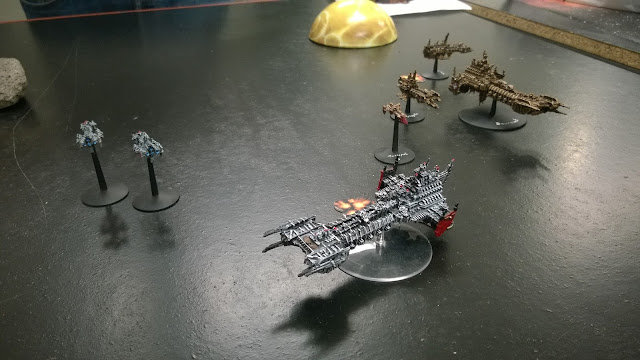 I am missing a few photos at this point, but our Battlebarges danced around each other for a handful of turns, just out of effective range before he decided to send his off across the board to turn around in peace. This left my Battlebarge and last cruiser to deal with his remaining escorts which it managed easily, losing the already damaged Strike cruiser in the process. It was now Battlebarge on Battlebarge, both having taken the exact same damage. We both reloaded our ordnance and went around the planet that was in the way and got ready to unload everything we had. When the two ships finally met, it was close range and his turn, a full broadside into the prow of my ship later, and his Battlebarge was the last remaining ship on the board. A close run game and a proper laugh. 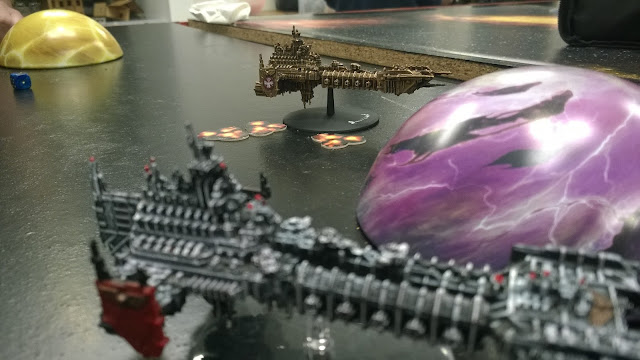 We have loads more plans for this so expect to see a lot more random snippets on this blog in the future.

Email ThisBlogThis!Share to TwitterShare to FacebookShare to Pinterest
Labels: BFG

With Salute less than a week away my attention has been drawn to the list of unfinished projects I keep on my phone and it is daunting, so I have decided to get as much painted in the next 7 days as I can. It's numbers over specifics at this point so anything could go up on this blog over the next week.
The first bits are from a conversation I had at my club on Wednesday and definitely not the outcome of the conversation that anyone would have expected. We had just finished playing a Napoleonic Naval game (see link) which I was using to show another mate the basis of an idea I had and we got chatting about Battlefleet Gothic (more on that later) and passing through anything else that interested us and this reminded me I hadn't finished the additional units I was going to use to turn my Lion's Rampant force into a Dragon's Rampant army. So here they are: 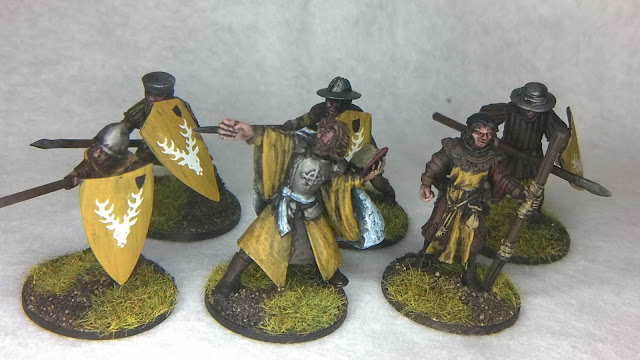 The first unit is my wizard, apprentice and bodyguard. This 6 man unit means I can use my wizard in pretty much anyway I want: Hard unit with magical abilities, single man unit with magic, wizard and apprentice for Frostgrave or anything in between. The joy of Dragon's Rampant is there is no set way to use anything, so I can try different ideas out with these 6 men. Everything in this unit is painted as per everything else in the army, the only exception being the bodyguard's shield have an extra detail just to make them stand out a little. 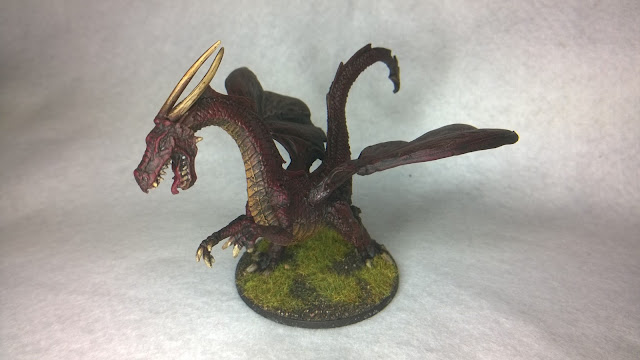 Next up is exactly what it says on the tin; the dragon. You can't play a fantasy game without adding a monster and it seems a bit daft not to add a dragon to a game that has that monster in it's own name. While my magic user is painted to match my colour scheme this one's palette was chosen to stand out, his belly is yellow(ish) to kind of match, but the dark red is something completely different. 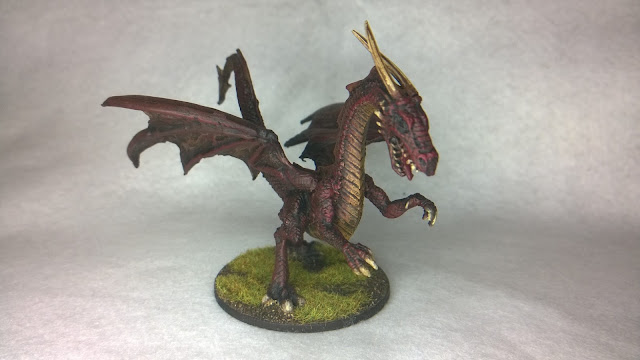 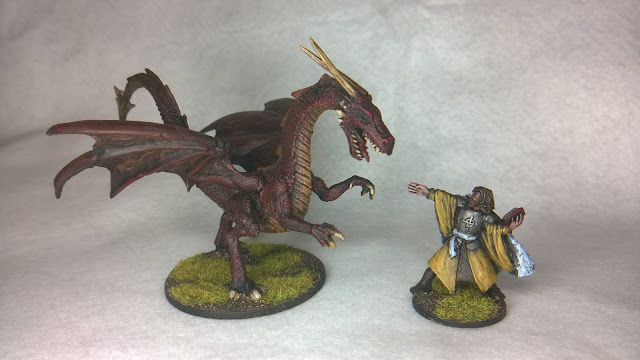