The next series of posts are going to be a detour that I hadn't planned on a project I thought was basically finished . . .

This sordid story starts a couple of Mondays ago when I was quietly minding my own business and spending some time catching up on blog posts when I came across Jay's Wargaming Madness and his newest post an ACW farm defence. This was followed by a conversation with my mate, Neil, which really sent me off the deep end as he offered me a pile of figures for free, which itself, lead to me placing a top up order with the Perry twins. 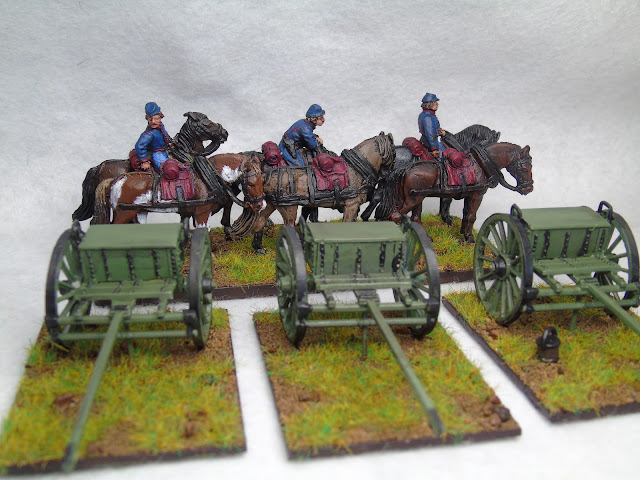 Amongst the many things that the game inspired me to do was to finish my cannons properly. Initially, I had built and painted my cannons and crew to get them on the table for a game, leaving the limbers on their sprues as a job for later, but as is so often the case, there is always a new shiny to focus on rather than doing limbers for units you are already using in games. Once I had decided to get om with them, building and painting turned out to be a fairly straight forward job * and they will make my games look a fair bit better straight away. As cannons are a fair bit over powered for their cost** in Rebels and Patriots we are unlikely to run more than a single one per side, so to keep costs down, I only bought a single horse team (I'll probably get more another day) which was then built to go in my Union forces too. In my head the two sides are starting to looking like a defensive Confederate army and an aggressive Union army, so my battlefield extras will start to show that theme.


*that I should have done at the same time as the cannons really
**or is it under pointed? 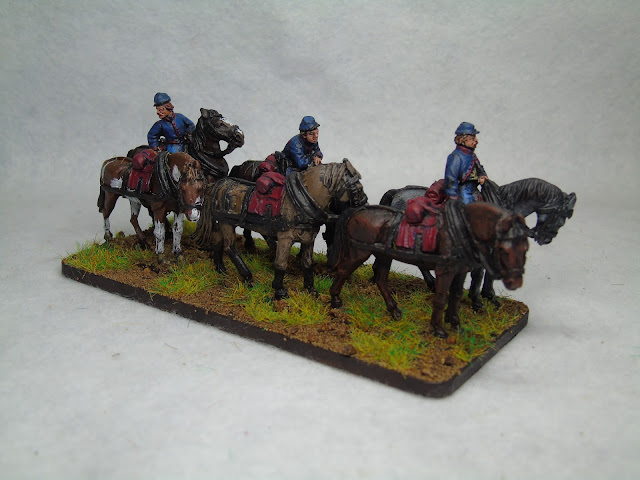 I'm painting up horses for the limber team at the same time as I paint horses for the next units of Union Cavalry to try and get a mix of different horse types in, while hopefully not just going mad and having one of everything, but I had to try an American paint horse.﻿ 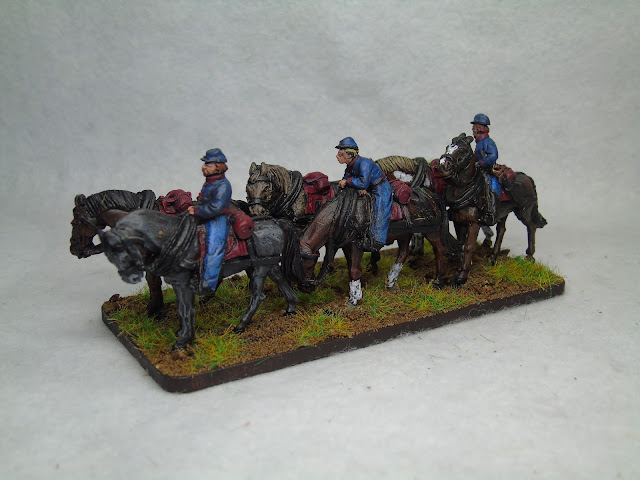 I'm quite pleased with the resulting cannon and full crew and am really looking forward to getting them on the table. 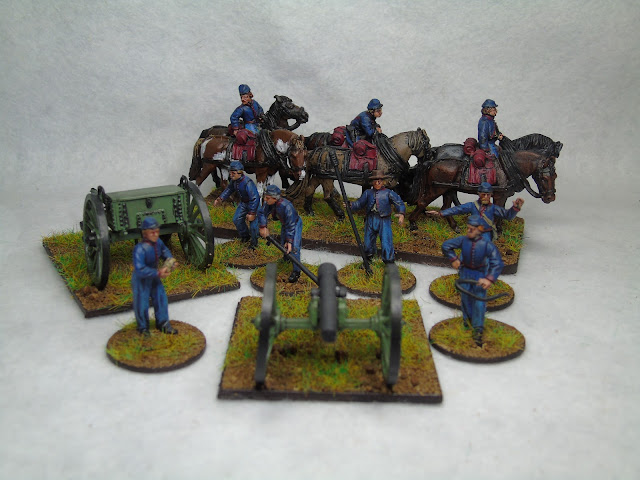 Gonna Shoot Me Some Varmint

As I said in the last post, I had been watching a lot of films that have been inspiring my hobby and this is another one of those. In the last few weeks I've watched Tombstone (not hugely impressed) and the first 3 of the Clint Eastwood spaghetti westerns (A Fistful Of Dollars, For A Few Dollars More and The Good, The Bad And The Ugly - which I love even if the dubbing is terrible) and this got me thinking. Then when I heard that 4ground had gone under (hopefully just in the short term) it gave me the kick up the arse to really get on with some ideas I had been brewing for Dead Man's Hand and this is the first* of them.
Dead Man's Hand is one of my most played single ruleset in the last 4 or 5 years** but we have basically just played the same Lawmen vs Outlaws based games since we first picked up the game, ignoring the odd Kelly gang or Cowboy/Desperado diversion. I picked up Legends of Dead Man's Hand at Salute (and have just picked up the Curse of Dead Man's Hand to complete my collection) so we could try some different scenarios and after a quick flick through and a quicker chat, it was decided to pick up another gang, which with my recent film history turned out to be the Banditos. Looking at their rules they should play differently enough to mix the game up a bit, plus they look different enough to change the aesthetics of our games.

*Of many
**There are just too many good games 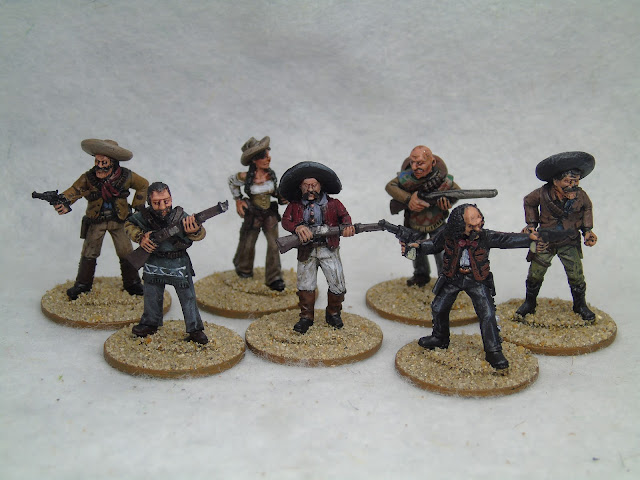 The models themselves are from Great Escape Games and are only the second of their boxed gangs I have actually bought*** and are really nice sculpts with a lot of detail. When it came to painting, the detail was a tad daunting, so I did the only thing I knew how, bring up a picture of their painted gang and copy it. Although, I did swap the colour schemes of some figures and change a few colours around to make them my own.
***At the moment

Charge of (a different) the Light Brigade

Over the last few weeks I've had a couple of evenings and whole weekend days where the wife has been out and I've had the house to myself. This has been brilliant for my hobby productivity but it has also meant I have watched an inordinate amount of films, some completely inane but some that have inspired me to do more bits for my hobby. This post is the first of one of those.
One of the films I watched was Gettysburg, having never seen it before and not knowing what to expect, I sat down one evening with a handful of batches of primed Greek models, a beer and put on the film. Four hours later I was trawling online to get some American Civil War Cavalry without a real plan as to which side it would be for, which is why the Perry Miniatures plastic box was such a good deal. Being useful for both sides, it gave me another couple of days, while it was in the post, for me to really work out which side needed them and because the only other person I know who is currently painting an ACW army is doing Confederates, it made sense for me to add them to my Union army. 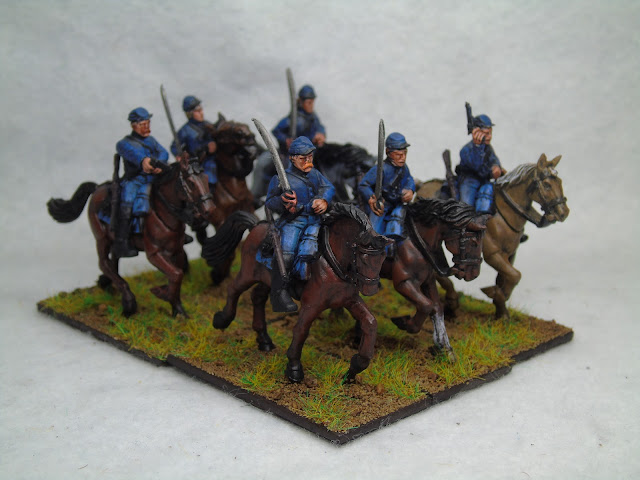 We played a 36 (ish) point, 4 player game of Rebels and Patriots last weekend and, although I only had a single unit of my cavalry ready, it was good to see what they could do (I completely forgot to take any photos) and it turns out they can be brutal, however, little 6 man units of light cavalry are not shock troops and really shouldn't be used as such. 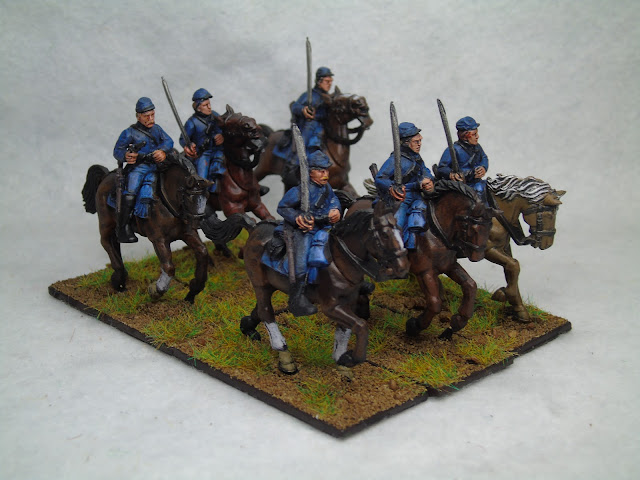 The last model is from my first Perry order. I bought him with the mind of putting him at the back of the board as a bit of battlefield clutter as he is probably holding the two highest ranking Union officers in my force. 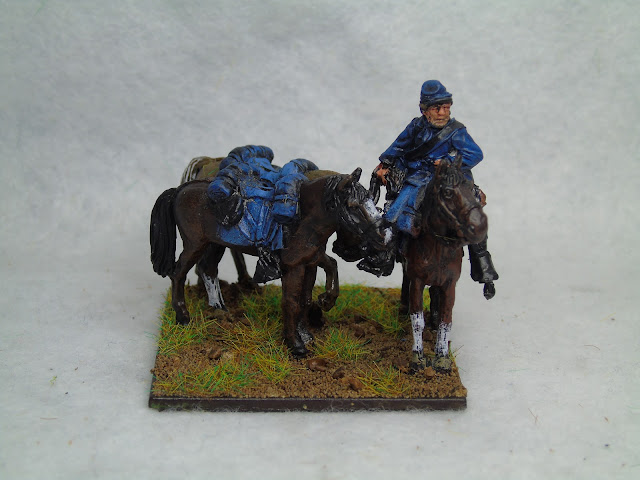 Summon the Gods and call down their wrath

To tie off my ancient Greek project are the pack of Gods and the Gorgons I bought from Foundry Miniatures. Now that everything I bought is painted and I have 2 full box files of figures, I am happy to call this project finished, for the time being.*

**Again, are projects ever really finished?﻿ 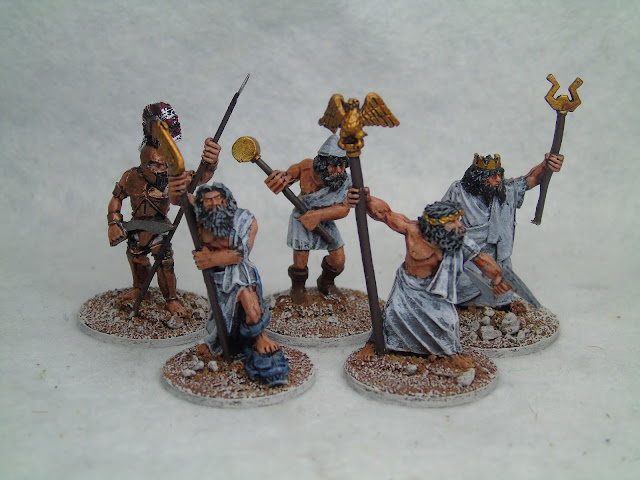 From left to right we have: Ares, Poseidon, Hephaestus, Zeus and Hades. I'd have loved to have Athena in the mix, but if I was only buying one pack, this was the post useful one to pick up to give Of Gods and Mortals a try**.

**Now where is my kraken? 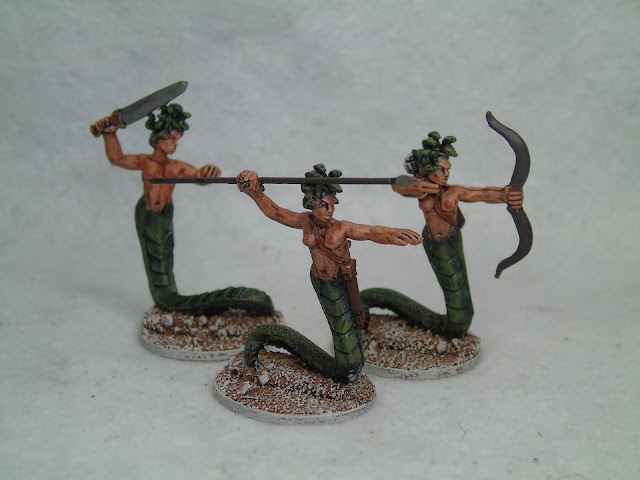 I'm not 100% sure on the Gorgons colours. I copied pictures I found online as I wasn't sure how to make the transition from the human half to the snake half but in hindsight, plain green doesn't look particularly snake like. I'm half tempted to go back at a later date and repaint them in a more python like skin.

War is Father of All

I've had a decent hobby streak recently with a few posts coming this week in fairly quick succession. The last two units of Greek mortals for my Athenian project are an (oversized) unit of archers and an unit of unarmoured hoplites. It looks a lot like I'll be getting the ancient Greek version of Lion Rampant or maybe Men of Bronze to the table before Of Gods and Mortals, but we shall have to see what my regular opponents fancy trying first. 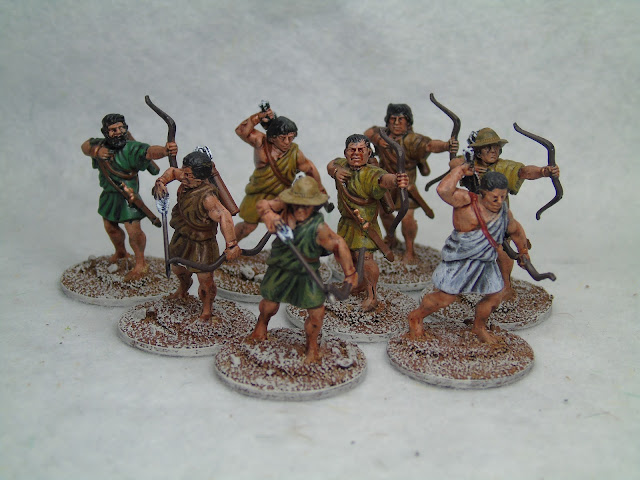 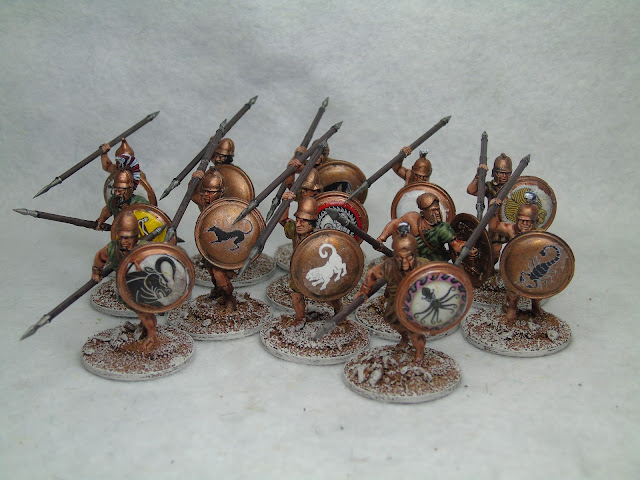 This is the final unit of armoured Athenian hoplites for the Greek project, leaving me with a single batch of mortals and a few legendary models left to go. I've added in a heavy lochagos from the Mortal Gods partly because I need some heroes for Of Gods and Mortals and partly because I wanted to see what the model was like, although I replaced the spear with a sword to make him stand out on the table. 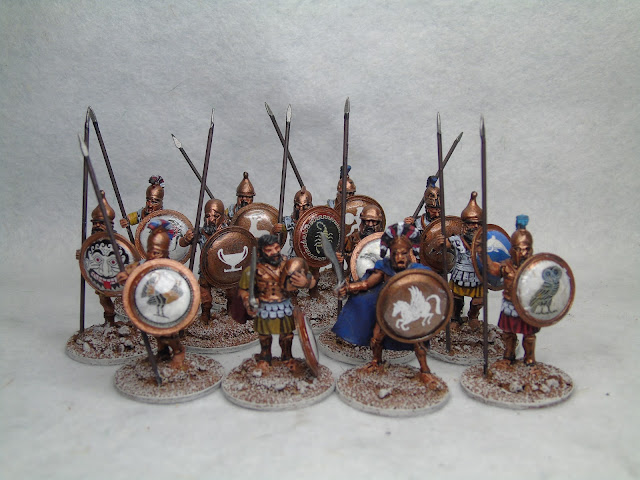 The last few batches of mortal Greeks are on the verge of being finished but due to how quick and easy undead are to paint, the last two batches of skeletons from Wargames Atlantic have jumped the queue. I built the last figures I needed for my planned Of Gods and Mortals list then built the last few figures as a mix of either spearman or archers to round out units for a potential Lion Rampant army as I am very tempted by another box or two of these. 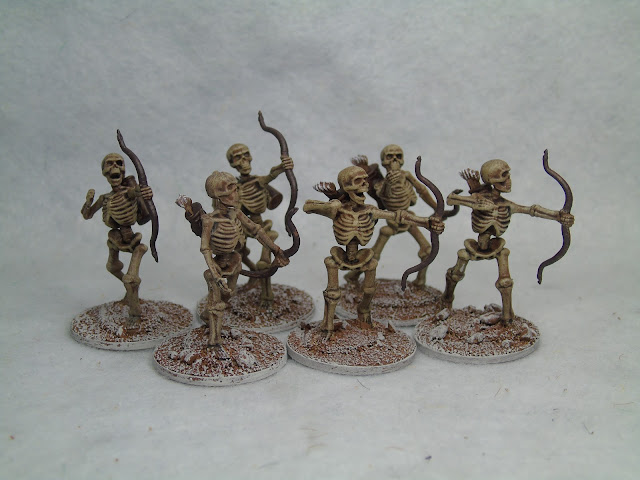 The spearmen have been built using the last of the round shields and a handful of the more Boeotian looking shields, with a fair few left without shields at all. If I was to buy another box or two of these, I would definitely buy a pack of spare shields from Victrix. 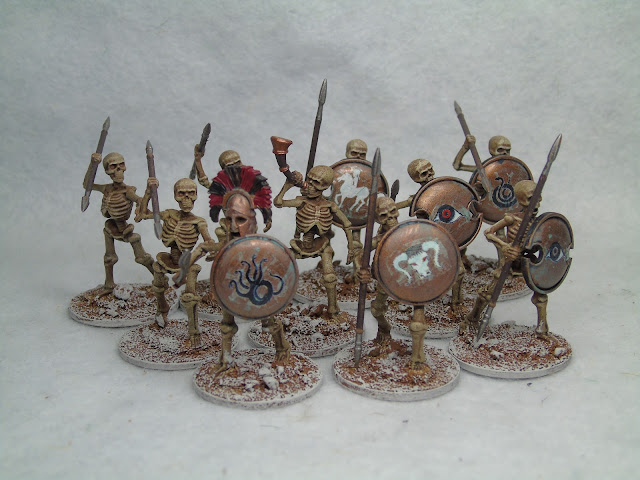 I listen to a lot of wargaming podcasts and follow a lot of blogs and Gaslands was one of those games that was impossible to miss when it was first released and as a result I had the book on preorder as soon as I heard about it and a pair of toy cars sitting on my desk to go with it, but that was about as far as I got. Then recently my gaming club (SEEMs) decided to do a big order for the templates, something I had been meaning to pick up for ages, so I went in on it too and once these had arrived the project escalated quickly, with a game planned for the following week.

As I have been focussing on my Greek project, I left the toy cars until a couple of days before and in a blind panic I raided my *Pile of Potential for anything that looked remotely useful and the following two cars are the result. 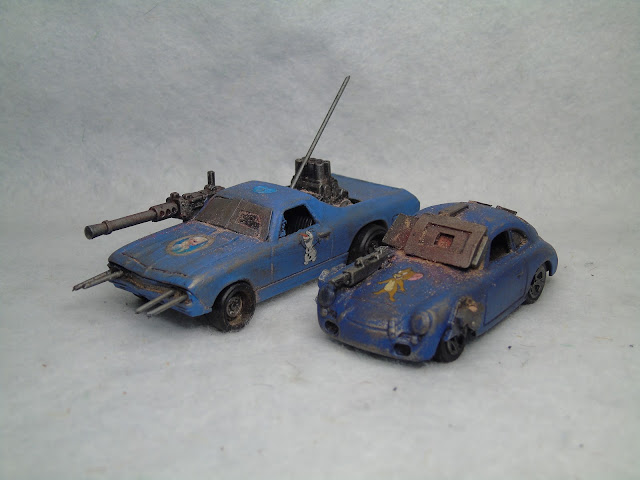 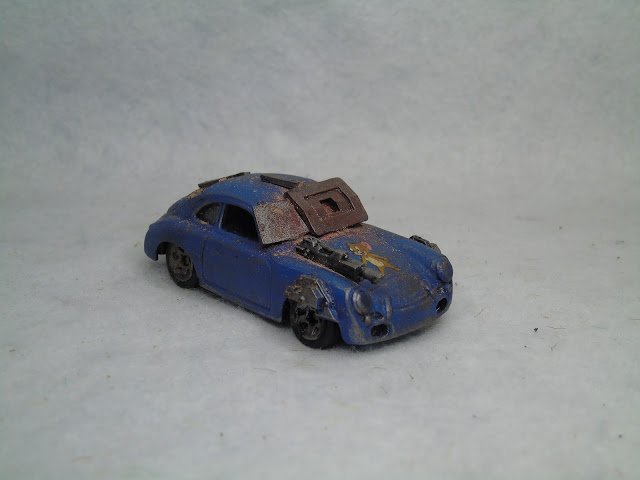 In hindsight, I feel like this model could do with numbers on the doors.﻿ 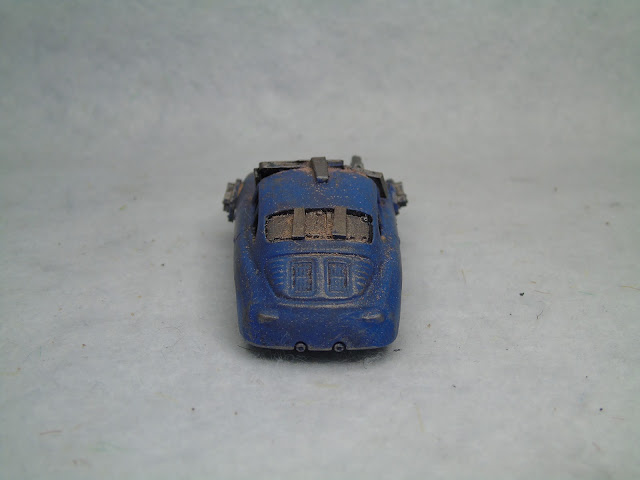 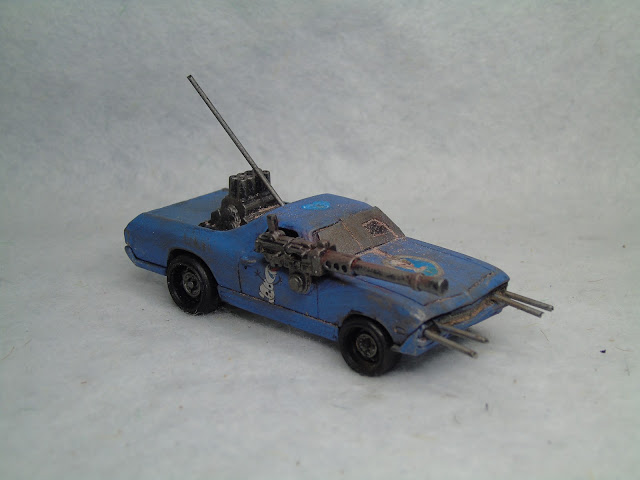 Of the two cars, the one with Jerry the mouse on the front was the one I designed for myself, with the Frozen themed car being designed for my mate Steve B**.  The brass spikes on the car are because he hates wire spears too. I’ve not added a huge amount of bits to either car, but what has been added is either plain sheets of plasti-card cut to fit or bits from various GW kits.


**Whose young daughter is going through a Frozen phase . . . 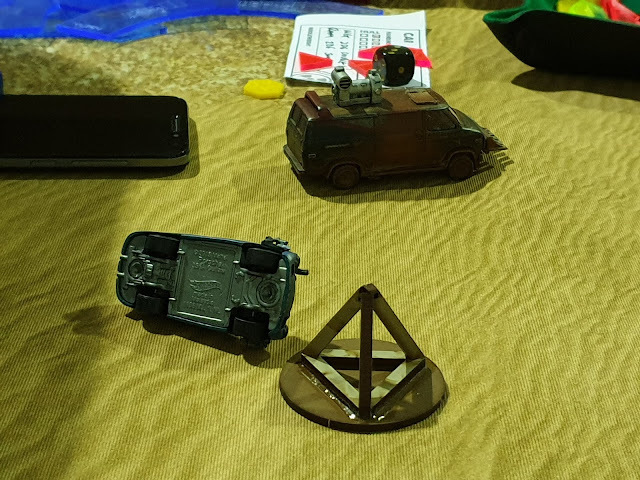 The last photo is the result of a wipe out that ended with a crash into a concrete bollard which ricocheted off into a crash barrier, with my driver going through the pearly gates upside-down and on fire - beware of those pesky hazard markers. I'd like to say this was near the end of the race, but the bollards I hit were actually the first gates . . .
I've also since bought another car and have plans to round out both teams. . .