I hadn't intended to do a step by step building process on this blog at all as it isn't really my style but I was going through my photos and realised I had such a comprehensive series of shots on how I did it that it seemed daft not to do something with them. It's worth pointing out that the techniques and ideas I have used in this whole scenery project have been shamelessly ripped straight from other blogs, namely; Toofatlardies and Wargaming with a Silver Whistle, but I hope it is clear that I have put my own spin on them and made the end result, uniquely mine. So this is how I built my first Afghan compound. 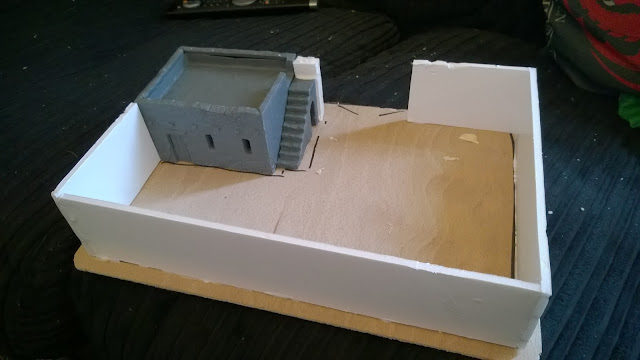 The building is a Perry middle eastern mud house I found cheap on ebay, mounted on some wood I had left over and with basic foam card walls around the edges to create the compound space. 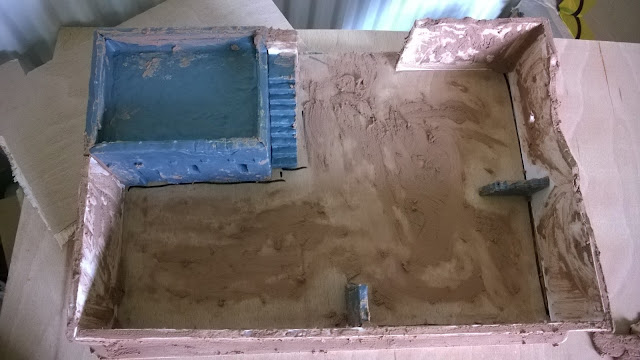 I also stuck the spare plastic walls inside the compound to break up the long straight lines and then covered every bit I could get my fingers into with filler. I tried to smooth out gaps and rough up flat bits and make it all look like it was built at a simple time out of local materials (mud). 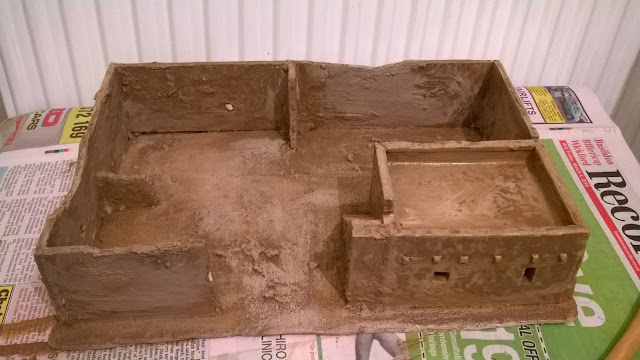 Once the filler was dry I covered the compound's base in sand and painted the whole model in Nutmeg Spice* as it's first base coat. 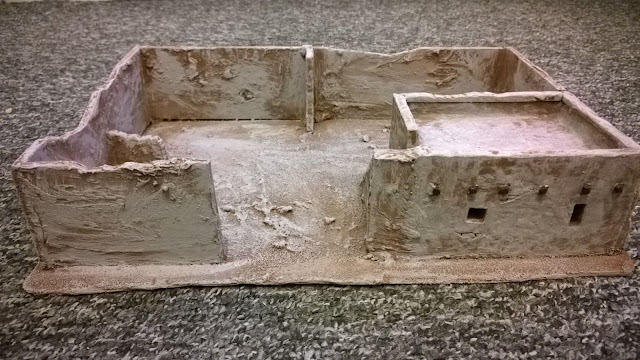 I then painted random patches in Earthy Hue** to break up what was going to be a really monochrome building and drybrushed the whole model in Cosy Grey*** for the final layer. 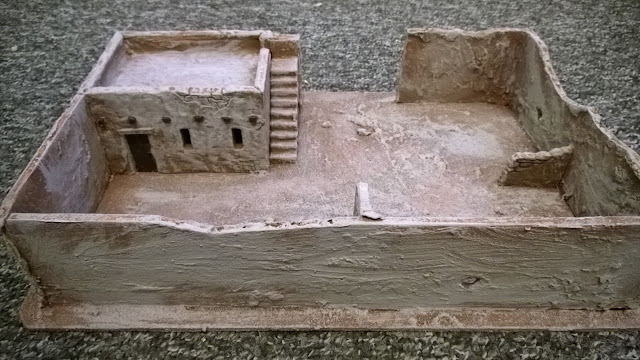 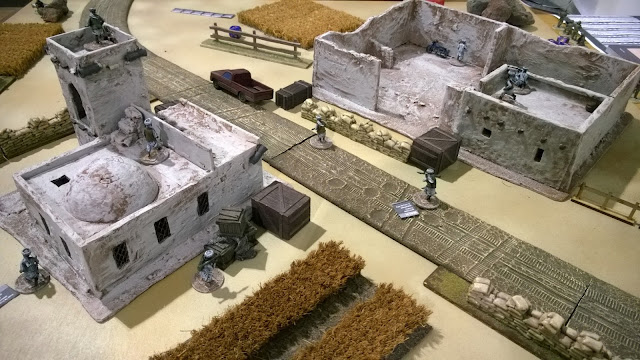 The end result. Probably needs some tufts to break it up a bit and I will get more gubbins to leave around the place, but I am really pleased with how it came out. Now to replicate the process as many times as I dare.

Last night saw the first game of Sangin Skirmish that the guy that managed to talk me into this and me played (and my first non-tournament game for a long while). As I had only finished two buildings by this point, we picked the small desert board at Wayland Games and sat down to give it a play through to get the rules into our heads. The British mission: Capture or kill the High Value Target (HVT) who is holding out inside the mosque. By the way, they know you are coming. 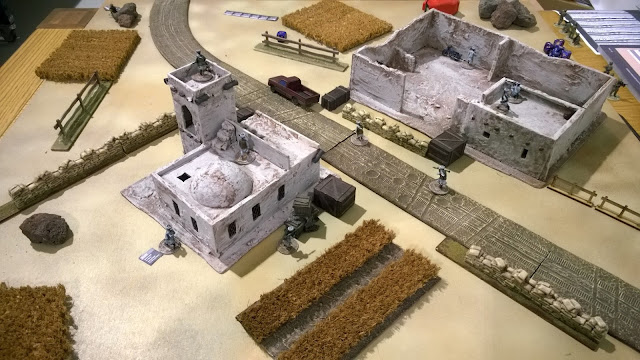 My Taliban list was working on the assumption that quantity is better than quality but in the first 6-7 turns that assumption turned out to be incredibly wrong. I managed to keep his lmg toting guy behind cover and cowering, but anytime he managed to get a shot off I was guaranteed to be in trouble. In one shot he did double the amount of damage that one of my fighters in the open could take and so panicked the rest of the guys who saw it, that half of my army (?) ducked straight down into cover and refused to react that turn. 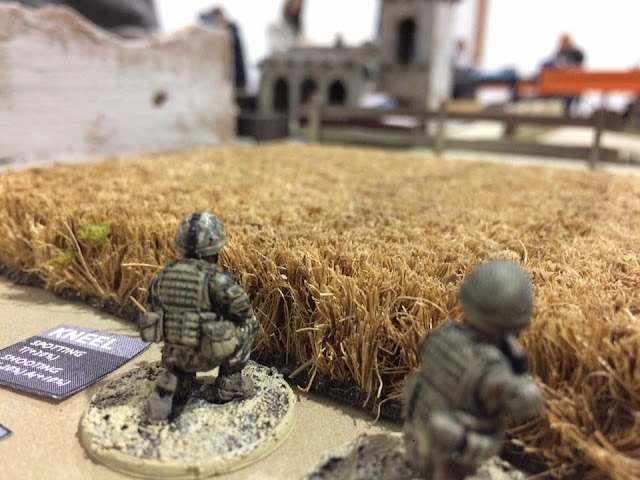 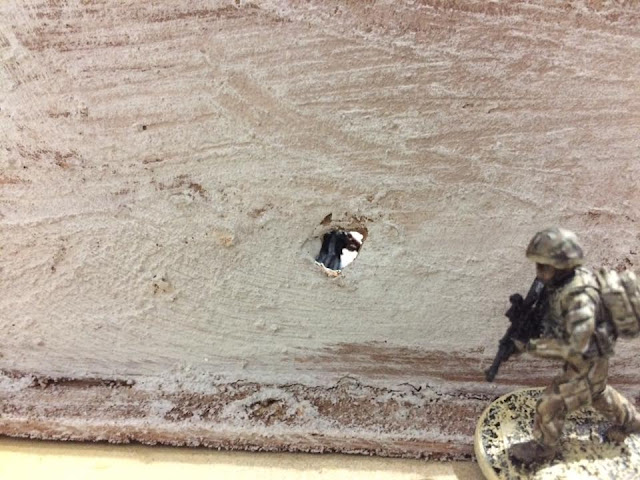 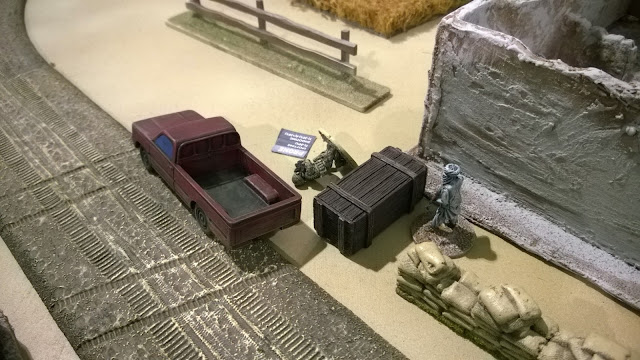 As the game went on, however, weight of numbers and the lack of cover on his side of the board started to show, the first guy he sent to make a break for the mosque got hit by a stray RPG and went down unconscious which meant his objective had to change from a kill mission to a evac mission, he had to get that guy out. 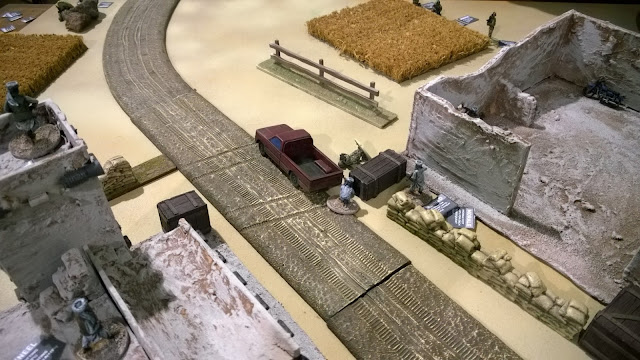 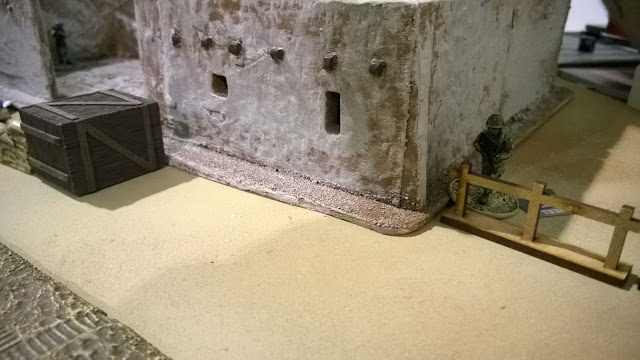 This was the point in the game where once his initial objective had swapped that I figured my game should have become easier, he was on the backfoot and for all intents and purposes I was winning, but it turned out to be nothing of the sort. Just because his aim had changed to running away didn't mean he could just run away, he still had to get to the middle of the board, pick up his wounded soldier and get him back off. If anything the game got more intense. 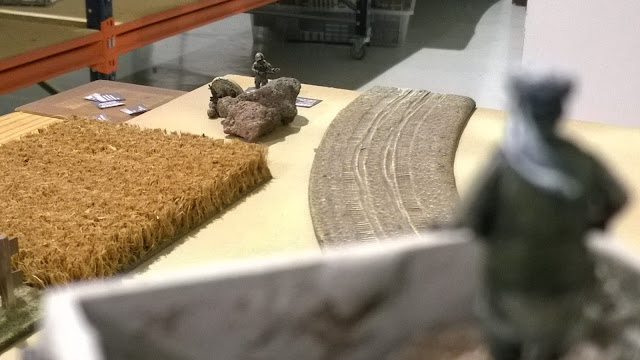 A lucky shot from my sniper (not pictured) managed to kill the lmg guy who did so mach damage earlier in the game, with the shock of him going down causing one of his squad mates to break and run away after two failed moral tests. Although the last member of that doomed squad managed to pick the dead soldier up and get his body off the board, it pretty much sealed the fate of the game. The Brits couldn't come back from this, even with his Rambo-esk Corporal running round the back of my compound taking out any Taliban member that got to close. 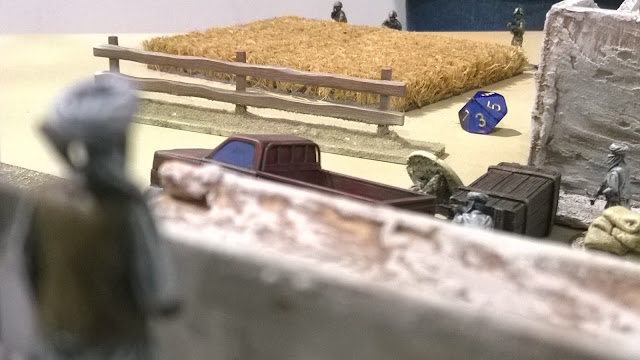 All in all, I can see Sangin Skirmish being played a lot in the future, but it is really intense both in terms of game play and house keeping, there are a lot of charts and tables you have to check for every single thing you do. While it will never be a pick up game like Bolt Action it has it's own merits and we have loads more plans of what we want to see if it can do.

As Salute draws closer I am trying to get some projects finished and off of my painting desk, hopefully, straight onto a gaming table. I am about 2/3 of the way through my Afghani troops and as I have a game coming up I have a steady stream of them running across my desk. 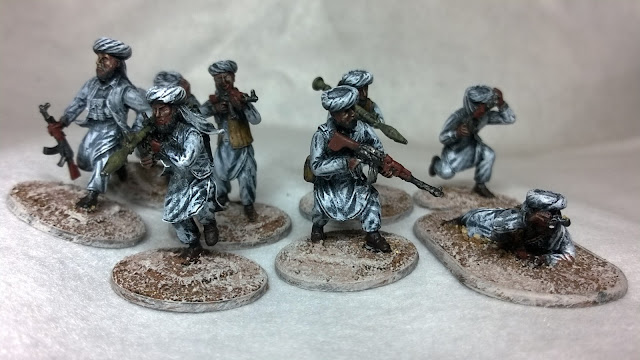 My second batch of troops, I have tried to split up crews and teams so that as I add more coloured vests or change my white at all the teams will show some variation. In this case, the guy laying down is half of a lmg team and I have part of a mortar team who I haven't included as his base isn't finished. 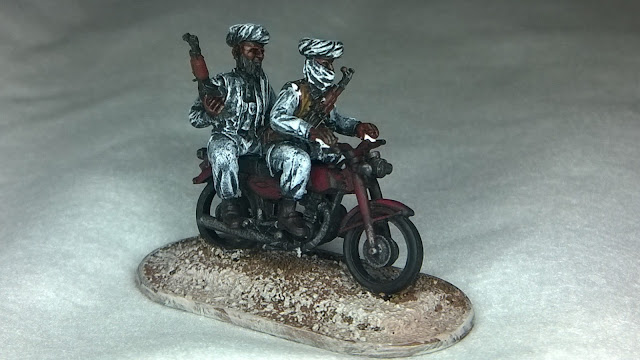 This is the first of 3 bikes I need to paint. As I bought an extra two to use as scenery I have left the guy on the back loose, this means I can swap in spare guys so that my bikes are always armed with the weapons I want them to have and if I need a single guy to be on the bike I can represent that as well. 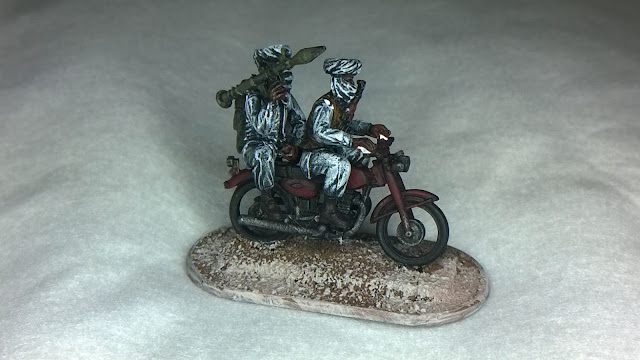 Now to get back to scenery and finishing off the last of the bits I bought last year at Salute.

Thanks for reading
Posted by Mike C at 09:04 No comments:

I'm going to interrupt my planned schedule to write a post about the Cam'Bridge Too Far Bolt Action Tournament I attended yesterday. As far as I am aware it is the biggest BA tournament in the world so far with 60 players and the prize support was spectacular.
My haul included a little scenery piece from Heer46 for having a unit Fubar, the Finland at war Osprey book for coming 52rnd (perfect as I have a few Finnish figures) and the 4Ground Pegasus bridge set (this thing is massive) for winning the raffle. 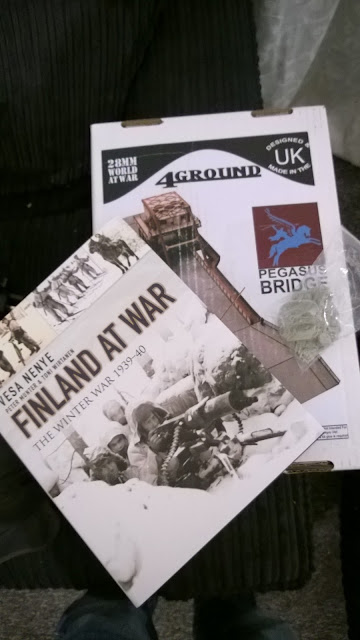 While my gaming skill left a lot to be desired, I had a great day and I would like to say a big thank you to the guys who ran the tournament. They are probably still laughing about my last game, though . . .

This is something I never thought I would be blogging about, let alone modelling, modern wargaming. When I first got back into wargaming after uni I had a handful of rules I didn't want to break; I didn't want to play anything in living memory, I don't like leaders that are too ostentatious compared to their troops (unless historically accurate and even then it makes me nervous) and I didn't want to play anything where I knew the real names of the men involved compared to which models they would be, I like my games to be more vague forces fighting battles set in a period rather than definitive units facing other known units in a particular battle. With my gaming moving into WW2 with Bolt Action I have broken both of the first two, with the last is still being my sticking point, breaking into ultra-modern gaming is making these rules look a little daft.
So, here is my modern force, Afghani Taliban. This is my initial starting 600 point force. In real life, the clothing of your average Taliban member seems to be a mix of pure white to beige, with a mix of jackets and hoodies of various colours, but I wanted to have some kind of colour code and uniform even if one shouldn't exist. The scheme will be more obvious when I have painted up more in the way of numbers but in the future, pure white will be a novice, coloured jackets will be a regular, or higher, and green jackets will be body armour. 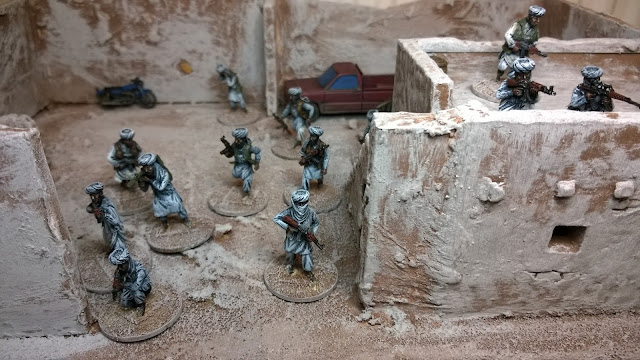 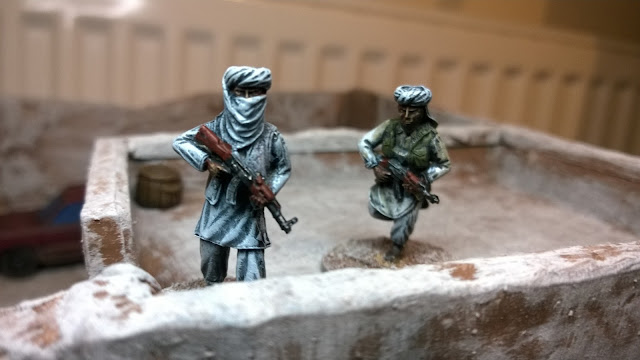 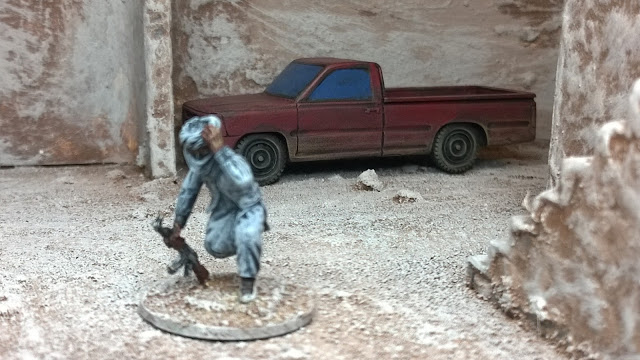 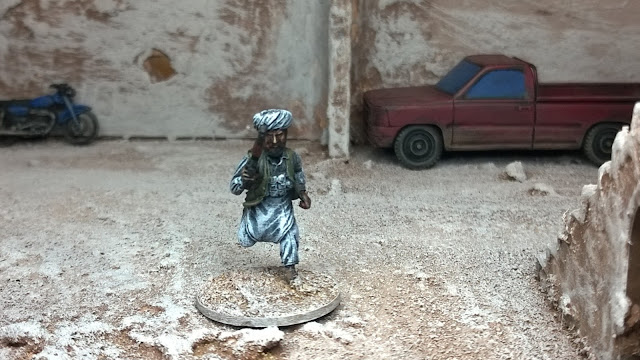 The aim in the future is a set of different leaders, or as my opponent keeps calling them; high-value targets, but for the moment the guy on the phone is my only leader. Next to him are the first two RPG's I've painted and a sniper. 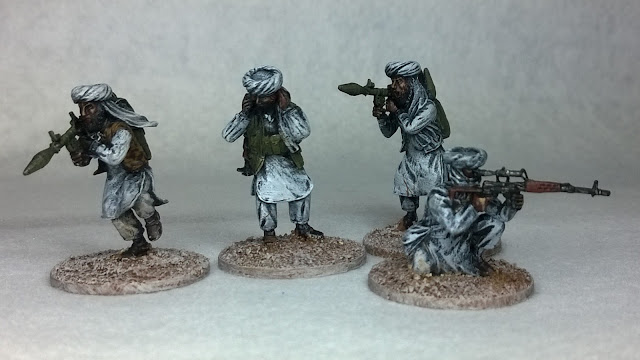 The next two groups are my first batches of normal troops. I am going to need a whole lot of these as time goes on. 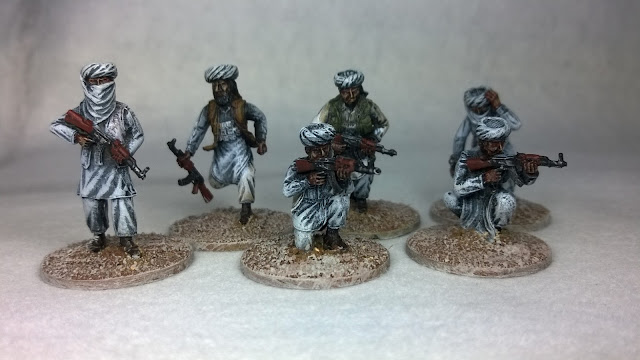 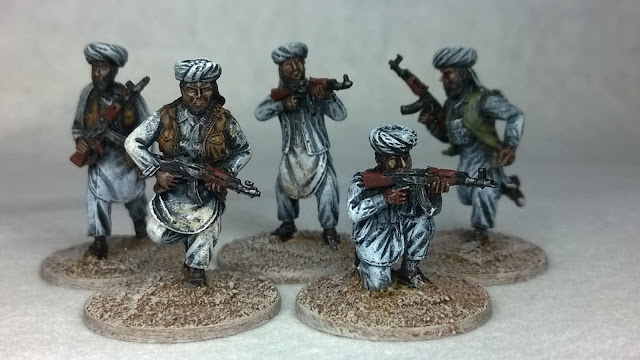