This weekend, just gone, I went to my first weekend gaming event, the Jungles of Akkar. As this event still has at least one more outing (30k frontier does the same event 3-4 times each to cope with the demand as it is a 20 player event each time) I won't give any details on games or scenarios, but I can do a mix of photos and my general feelings. 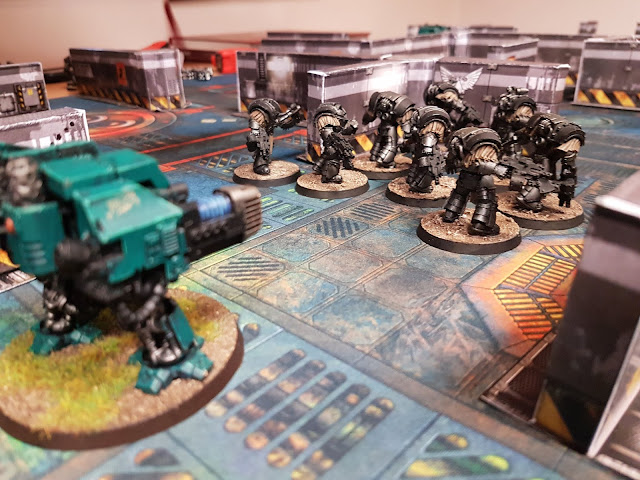 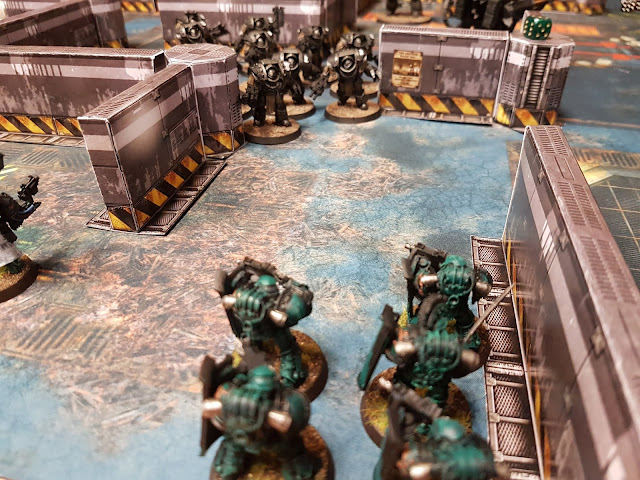 The weekend was 5 narrative games all linked in a single storyline - following on from past events set in the Rakallian Wars. Between each scenario we were kicked out of the room so they could reset the tables (every board was put away and replaced by a different one for every game) and there was a video before each game showing what we had done and where the story was going.
There was even an app that updated all day as a way of checking the scenario objectives, mission statements and a score submitter. 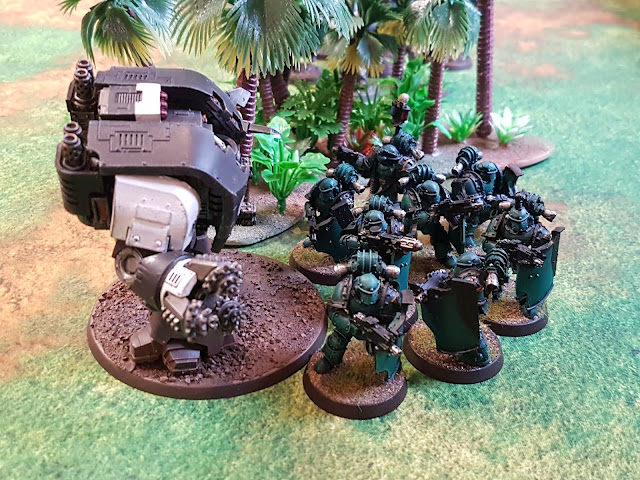 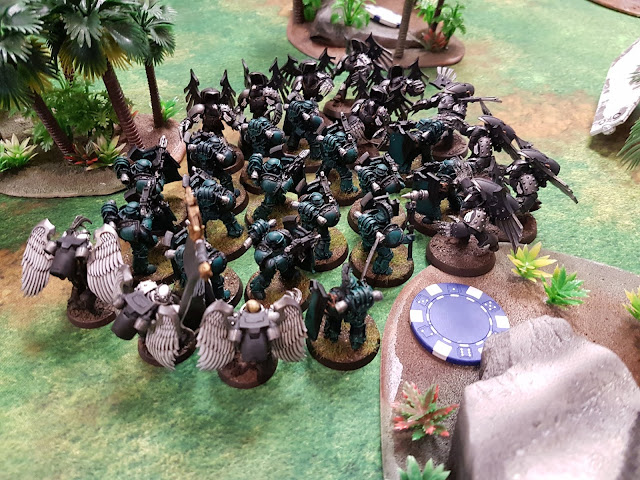 I think it is fairly obvious that neither of these combats went my way. 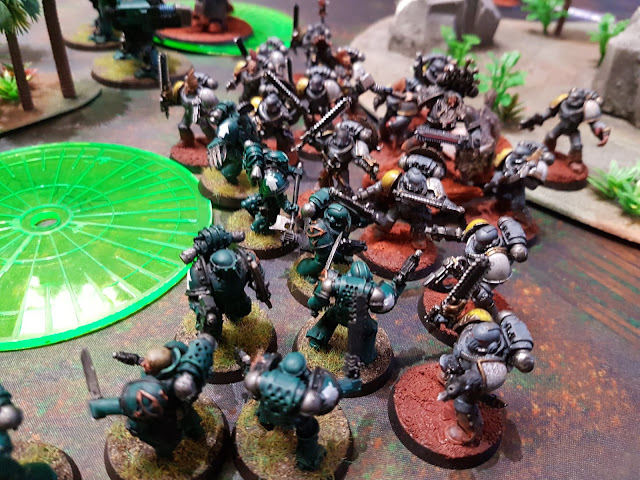 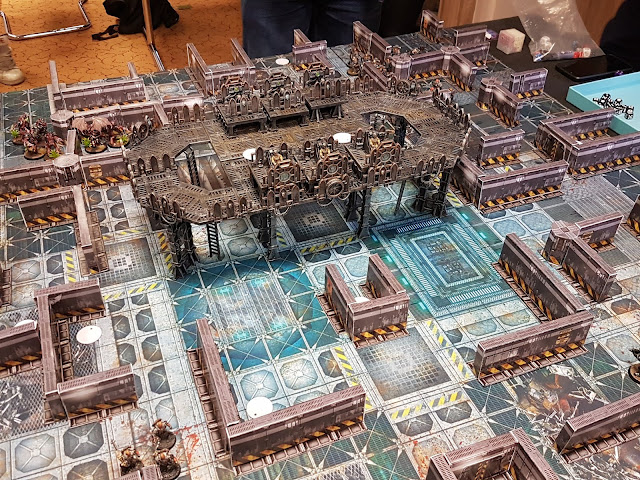 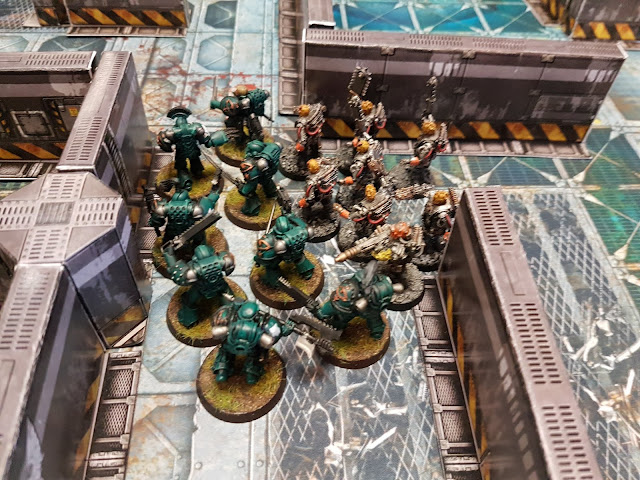 Before you start getting any ideas that I might actually have done alright in this event, I am assure you that I won exactly 0 of my 5 games and that all bar, possibly, 1 were major losses, but I had one hell of a time. Between the gaming and drinking, I will definitely go to another weekender, I will, however, make sure I always book the Monday after off work. 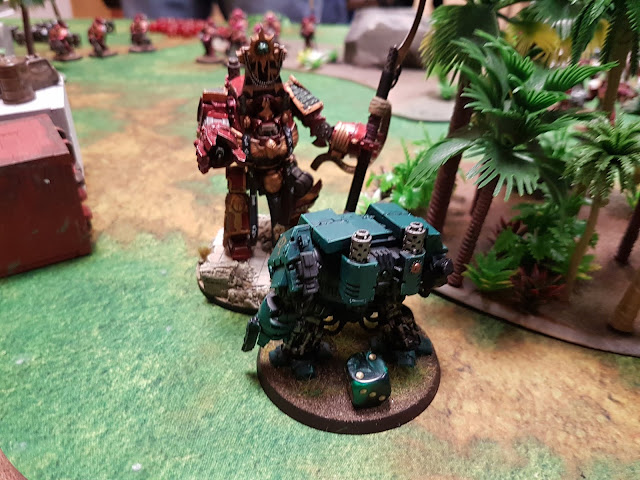 A couple of posts ago, I said I was going to focus and this is going to look like a massive detour already, but I very much see knights as part of my Sons of Horus collection, that can be used by themselves, rather than a separate collection. 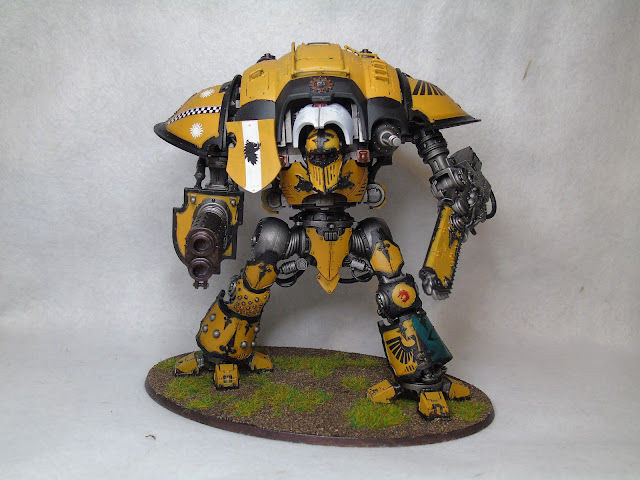 This knight is Sir Fion, also of House Steinschild, a knight Errant. Like my first knight * each panel has heraldry that means something;
*of many 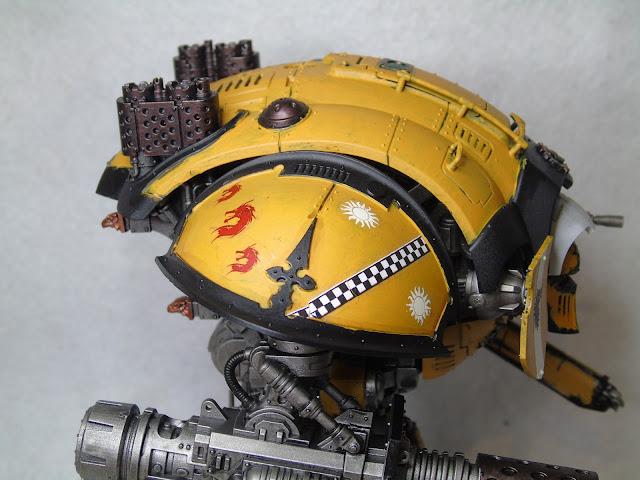 The left shin and kneepad is the big change on this knight and shows something I have been thinking about for quite some time. Yes, a knight house would have access to better enginseers and resources, however, if the marine legions are having to do hasty repairs to their armour, the knights would probably be in the same position. 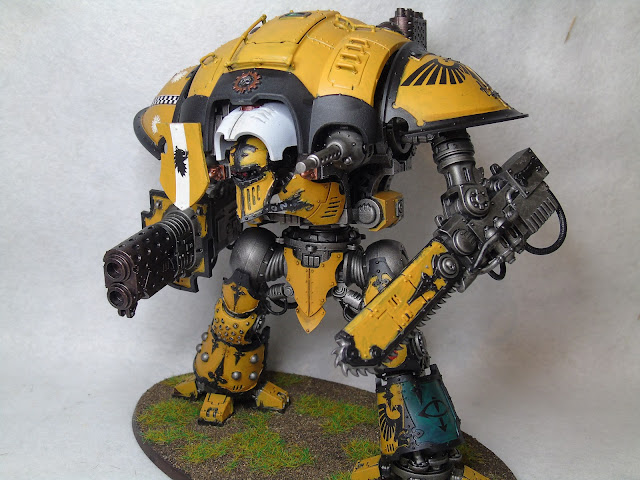 I want to talk more about the house when I have enough to form an army, but this is a good start.

One of the things I learnt from the game of Sharp Practise I played at the A Writtle Bit Of Lard was how powerful a unit of British Rifles could be, their points value (3x more than a unit of 8 French line) should have been the give away, but it wasn't. So much as it puts my British army at a much higher points value than my French, I knew I needed a second unit so I could try out bigger games.
The figures I ordered were, again, from Front Rank Miniatures who are my go to shop for metal Napoleonics, and I used the excuse to pick up a few other models that I have realised I was short of - level 2 and higher leaders mostly. I am still keen to get a few more games of this ruleset in the next couple of months and having more options available should help that stay achievable. 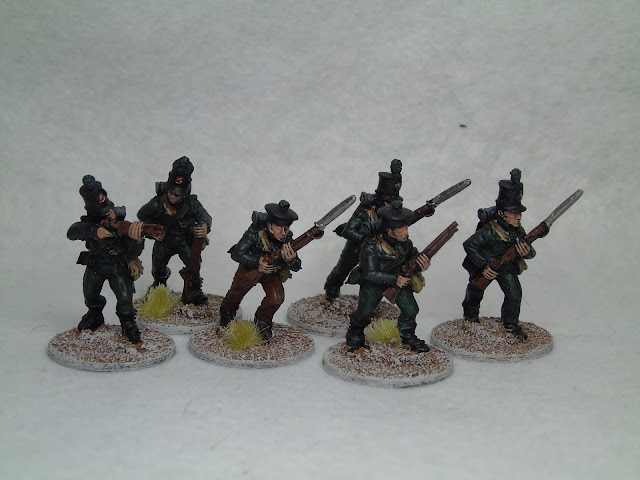 Anyone that listens to the Meeples and Miniatures podcast will know the phrase 'Dilution Theory' well, but for those that don't, the idea is that the more rulesets you play over the course of a year, the less games of a specific ruleset you get and the less uses a particular collection gets. While my blog title professes a love of the opposite, I am becoming a convert to the theory.
The moment of realisation was while reviewing my gaming stats* for this year. Of my top 10 most played games, only 4 have been played more than 3 times (and 2 of these are boardgames). Then it gets worse when you take into account that the 12 games of 30K I have played so far this year, means that the game has broken into my top 10 most played games of the whole last 5 years at number 8 of all places. Looking at my individual collections, my Baratheon army, that I spent months painting, has seen the table 8 times and that is one of my most played armies.


*I find them interesting, so don't judge me too harshly.

So, what does this all mean? While, I know there are going to be more than a few people reading this saying, 'so what? Just enjoy your hobby', and I do agree with that statement, I do also need to focus on what I own and what I enjoy. Ignoring boardgames** and games that I join in that someone else is running, I want to test a 6 rulesets and 10 armies gaming rule. In my head, I want to run this for the whole of 2019, but I suspect that setting 6 games and 10 armies at the start of a year, won't be flexible enough to deal with a year's worth of gaming, so I might review the numbers and/or the time period as I go, but I will try to 'demo' my theory for the last few months of 2018.

In other news last night, bouyed up by how simple some else running a game seemed, I organised a game of Sharp Practise with my un-used Napoleonic collection, and it actually went ok. I was much rustier on the rules than I had realised and there were some cheat sheets that the Writtle Warriors used that I really need to get my hands on, but it was really good fun.
Because of that, I have a handful of extra models in the post to even out my sides a bit but this is a game I look forward to playing more reguarly. 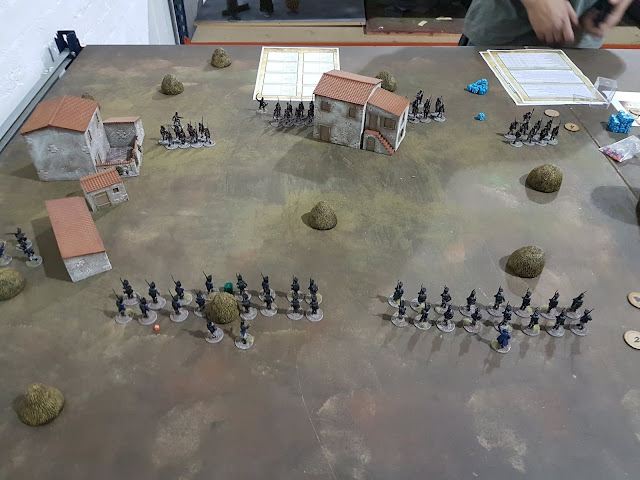 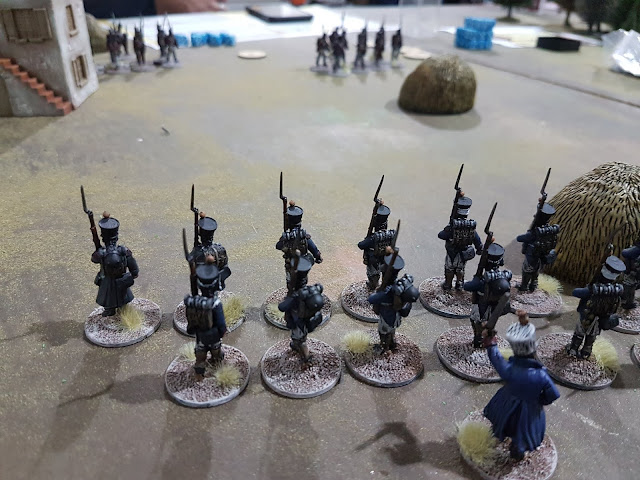 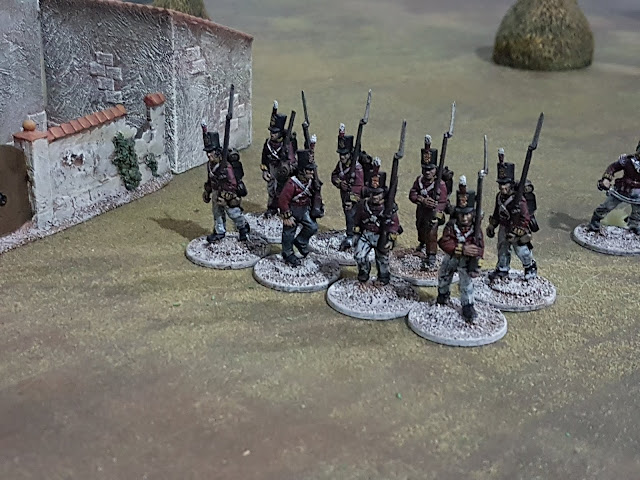 Thanks for reading
Posted by Mike C at 09:31 No comments:

A Writtle Bit Of Lard

On Sunday, I went to the Writtle Warrior's Lardie Open Day - A Writtle Bit Of Lard - in the guise of a SEEMs member, so that I could get a game of Sharp Practise 2 and What A Tanker. I have two armies for Sharp Practise and had heard good things about What A Tanker, but wanted to try out both games with someone that knew the rules so that I could decide for myself whether they were any good or not*.


*SPOILERS - I loved them The first game I made sure I tried was Sharp Practise 2. I always play the French in Napoleonic games, and this was no exception. Our mission was to chase the British and stop them making it across the table. The forces we controlled were split with the guy I was playing the French alongside quickly taking control of the 4 units of dismounted Dragoons, leaving me to play with the Voltiguers** on the other flank. 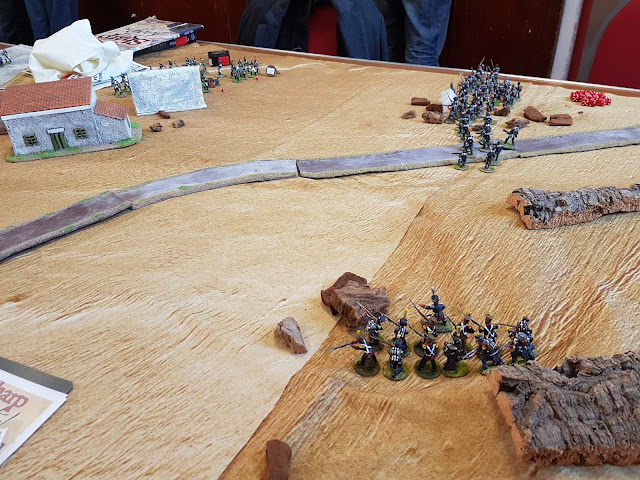 While I did, in the end, lose my units to some determined fire from the 95th Rifles, the highlight of my game was my ambush that made them flee in the first couple of turns and making such a nuiscance of myself for a fair few turns that I stalled the British advance by a very long time. 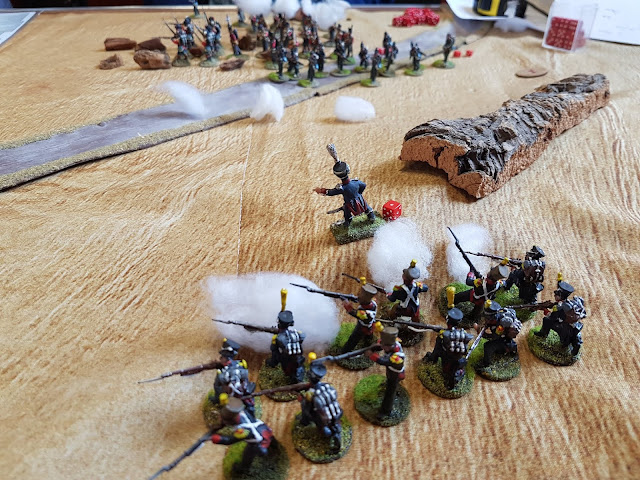 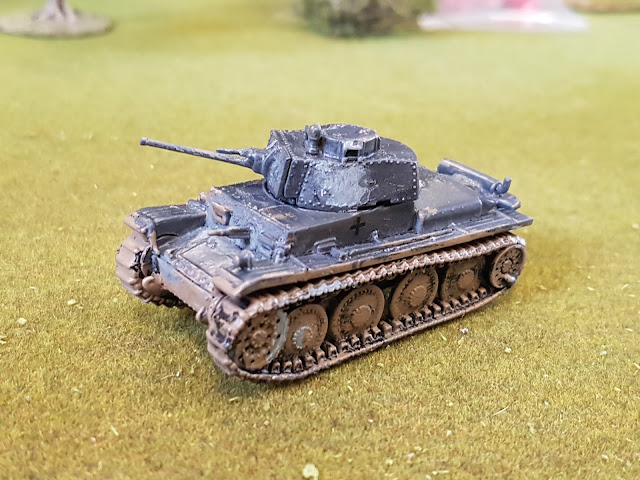 The other game I played was an Eastern Front set What A Tanker. I have always loved the little tanks in WW2 and was really pleased when I drew the chit for the Panzer 38t (a brilliant little tank). 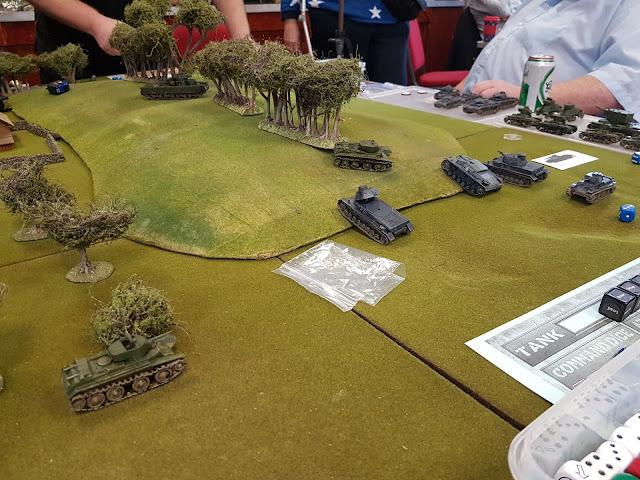 The objective was to take the village, however, displaying a level of tactics that I have never been a part of before, we charged straight for the hill with the intention that you can't claim to hold a village if you have no tanks left. This initially went badly as a plucky Soviet tank drove straight down the unguarded road, flanking us and killed one of our bigger tanks in a single shot. I killed him in a single shot in return but it dented our advance, somewhat.
With this the Soviets seemed to have cottoned onto our plan and advanced on the hill themselves. Determined to deny us our planned advantage. This was the point that my 38T found himself barrelling towards the lead tank, and crashing into it, instead of shooting as ordered ***.


***I misunderstood a rule 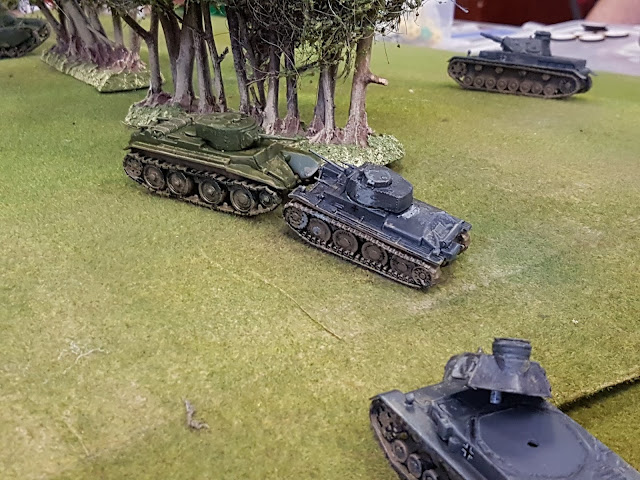 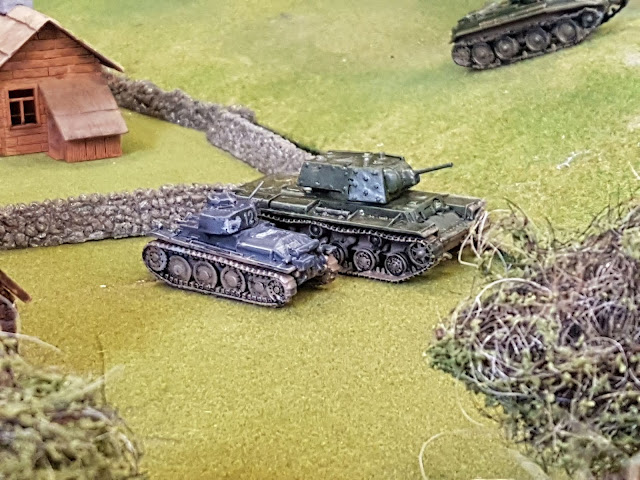 After being rescued and having the KV-1 finally be able to get a line of sight on my tank, I figured the best thing to do was hide next to it **** before cuing the Benny Hill music and vanishing into the village, leaving a cloud of dust in my wake. 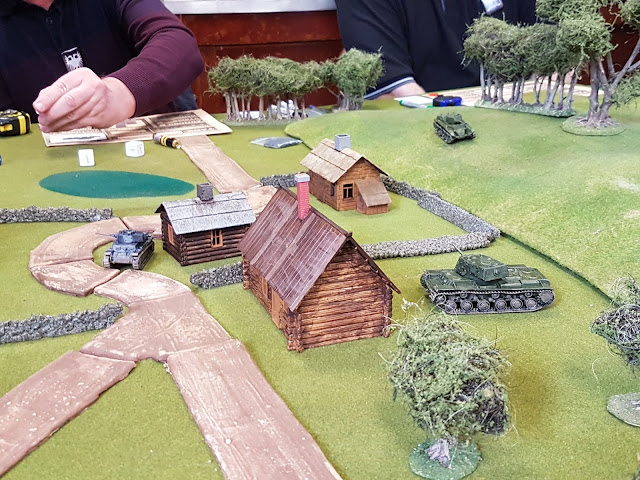 I have to say, as a big group game, What A Tanker was a serious laugh. It's not a serious, realistic WW2 simulation but that isn't what it was sold as. It is a set of rules I will definitely be picking up. 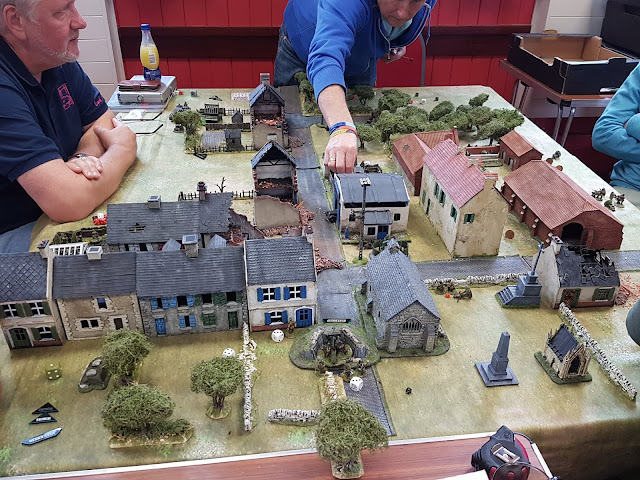 Lastly, while not a game I actually played in, the following pictures are of a Chain of Command game that just had the most spectatular scenery. With civilians and refugees it looked amazing. 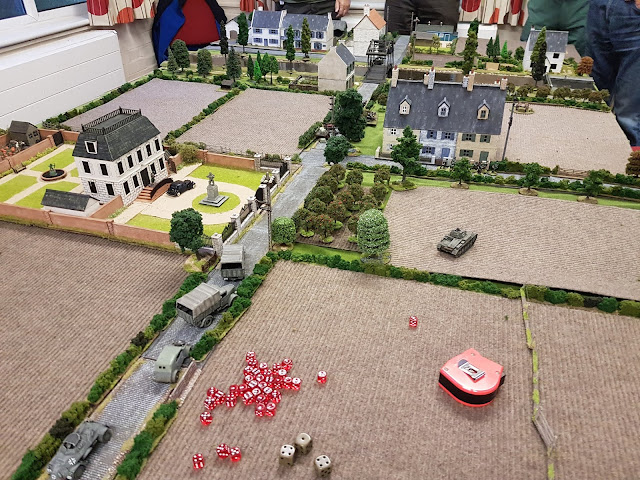 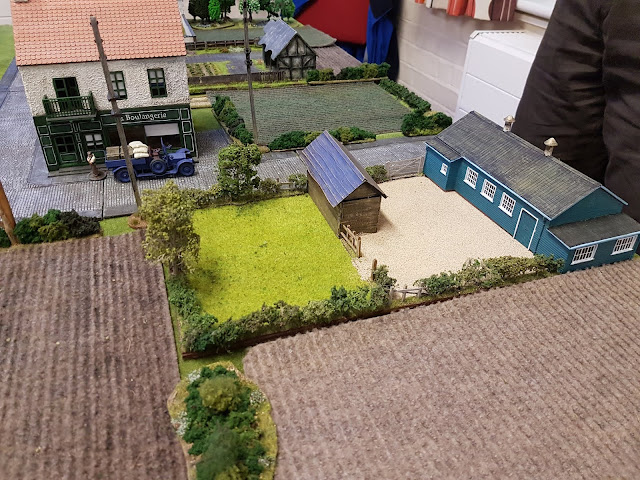 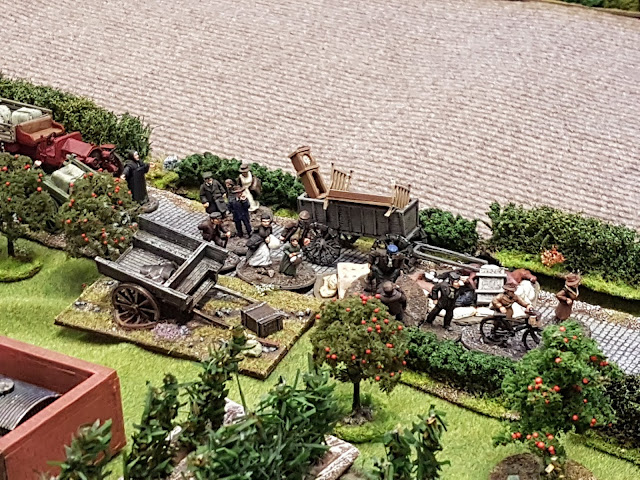