I am in a bit of a Bloodbowl mood at the moment as shown by the newest additions to my human team at the start of the week, this team now and the next team that turned up at my local Games Workshop today. First, though, my Amazons;
My Amazons were actually the first team I bought back when I used to go to Games Workshop's Games Days in the mid-2000's (every year I bought a different specialist games team/gang) and were the team I played with in store at the time, but due to not varnishing models and a lack of safe storage, they didn't survive the years. So, when this new edition came out I had two choices; Sell them or repaint and start a fresh colour scheme. The prices they were going for on eBay were just plain daft, but much as they were 'worth' I realised that I didn't have the heart to get rid of them.
I picked green and cream as my new colours simply because nothing I own is in those colours and it gave me something new, and so, the Jungle Wildcats were born. Sticking to a few basic colours made this team much easier to paint, everything is green, flesh, bronze, white or a variant of cream, with the odd bit of desert yellow mixed in for lizard skins. 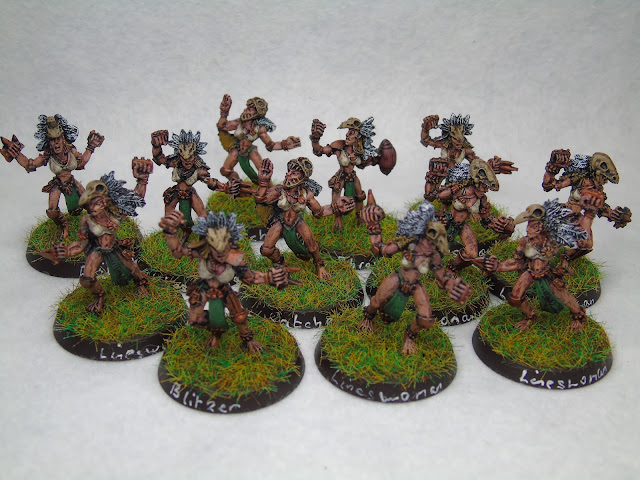 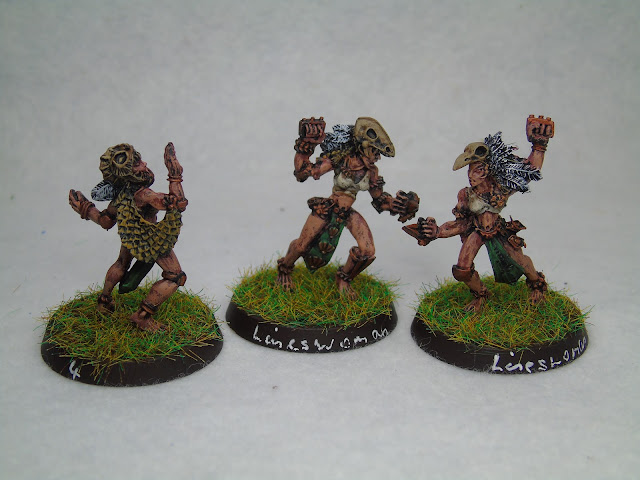 Again the coach and cheerleading section were bought at the same time (I think they were the only Amazon blister pack GW either did, or had in stock at the show) and sadly I cut up the 3rd cheerleader as part of an ancient project that I can barely remember anymore. 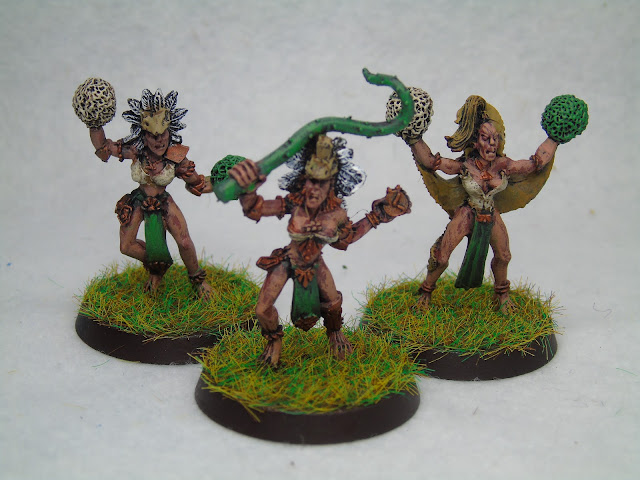 I'm just looking forward to getting them on the table now to see what they can do.

When I first played this edition of Bloodbowl on Christmas Eve, the thing I noticed about my team was that having the figures from the base set was absolutely fine for a stand alone game, but filling out some of those key positions would help my team do much better, my blitzers especially were having to do a lot of work.
So over the last couple of months I have been keeping an eye out for cheap models on eBay to fill my team out and give a few different poses, I have picked up one of the new ogres and I have dug out my very first team and started working on them.
But first, the last 4 players to get my team to the full 16. The two male humans are 5th edition metal models, one is catcher, while the other is a linesman. Catchers are my favourite position in my human team and the two that come in plastic stand out so much that two on the pitch at the same time looks odd, in my opinion.
The woman is my 3rd blitzer and is a repainted star player called Zara, she will stay a generic player in my team. I have read the Bloodbowl series of Black Library novels more times than is healthy since the first one came out years ago, and one of the things that always lept out at me was that the team always had 2-4 female players and the descriptions of their kit were that they were just as heavily armoured as their male counterparts, so mine was duly painted up as such.
The ogre is just to give a bit of muscle and try some ideas out. He is the new plastic Bloodbowl ogre model, but has had a head swap and arm swap with some old ogre bits from my bits box. 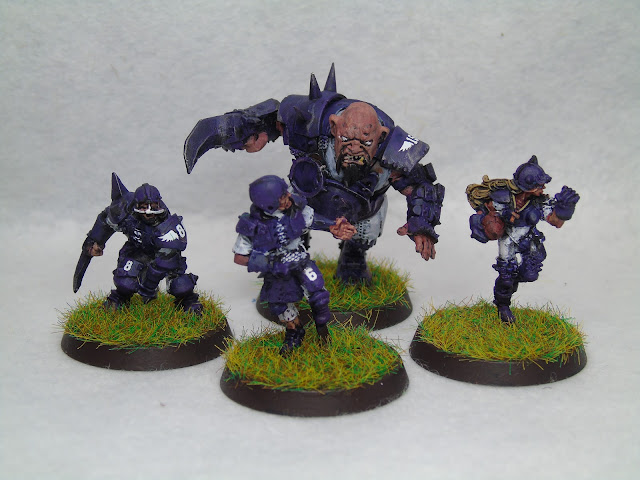 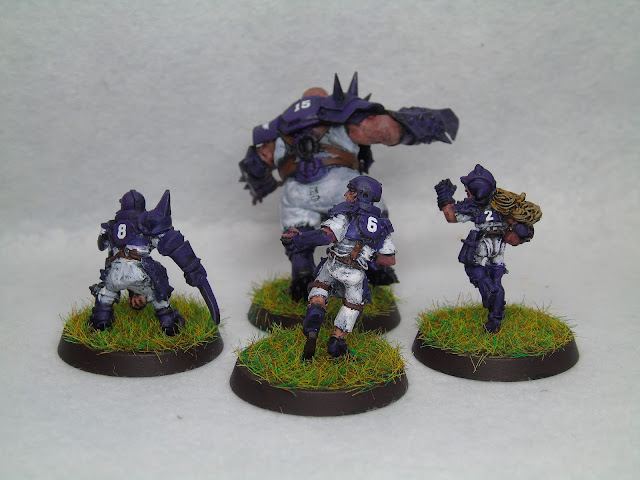 The one fear I did have about mixing 5th and 6th edition models was that the scale creep would be too noticeable, which I know it is for a couple of the other races - looking at the Orks mostly. However, as you can see from the photo below, while there is a difference it isn't that bad, especially when you think the smaller guy is supposed to be a more nimble catcher, so would be a tad smaller anyway. 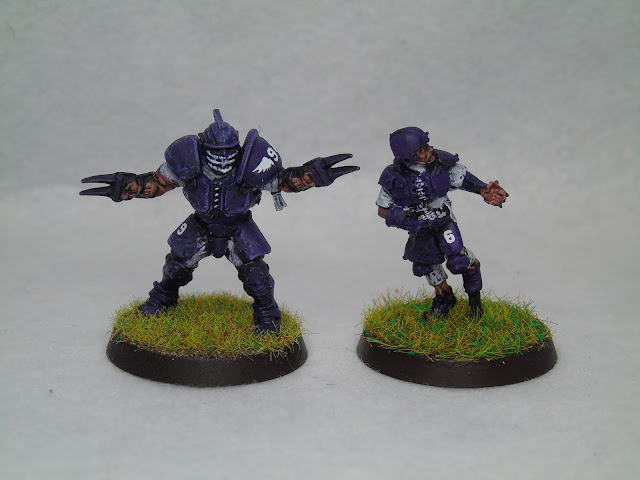 The last thing is a scoreboard I picked up from Blotz at the Broadside show and was one of those things I knew I just had to buy. All the dials move, so you can keep track of everything that needs to be kept track of and it means I am one step closer to a proper Bloodbowl stadium.
I used my human team colours for the home and neutral bits, while the away side bits were painted in my brother's Ork team colours. 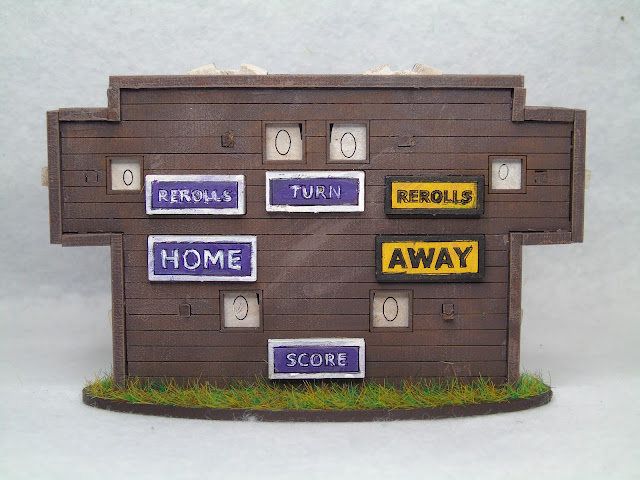 "The Sand People are easily startled, but they will soon be back, and in greater numbers."
- Obi-Wan Kenobi

So yet again I have failed to keep on target on something that isn't my target. The Sand People are, again, from the second box set, while the Bantha is from wave 4 but they had been sitting on the side of my desk* for a while, waiting their turn and it just made sense to paint them as it kept the Imperial Assault progress going even if it wasn't something I should have been doing.

*Although I am not sure why! 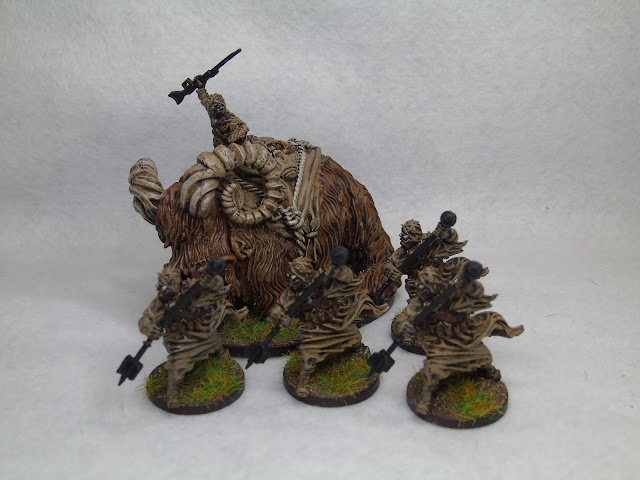 Looking at photos online of both the real props and costumes, and how others have painted their figures, the overwhelming theme was a limited beige pallet with a few browns on the details. So that is what I did, picking out some bits in different creams and beiges just so it didn't look like it was a quick drybrush and finish job. 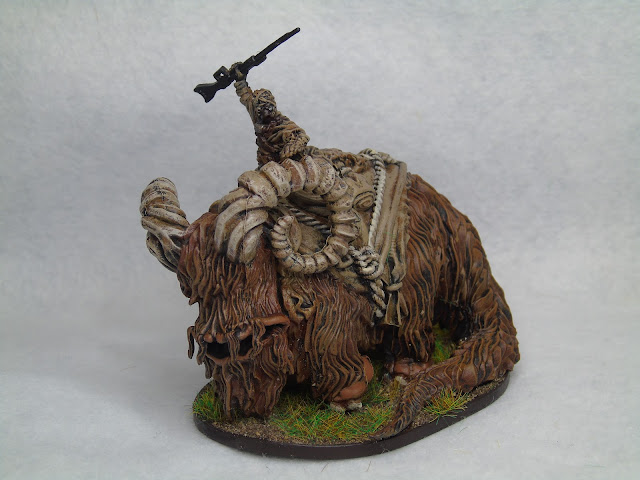 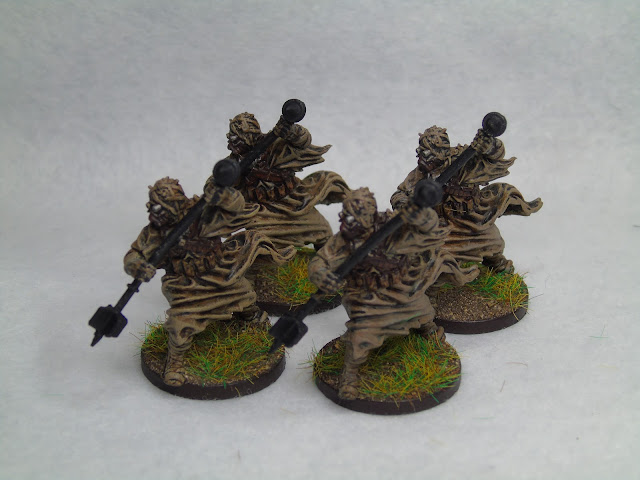 Again, I am deviating horribly from my intended painting tasks, but as this is a completely stand alone project this was as good a time as any to get it painted and get a game in.
Bommerz over da Sulphur River (I can't begin to tell you how unhappy my spellchecker is about that name) is a board game from Games Workshop that I stumbled on by accident while on eBay and knew I needed it in my life*. I figured it was something so different from anything else I had that it had to be worth a try.
* Board games don't count! 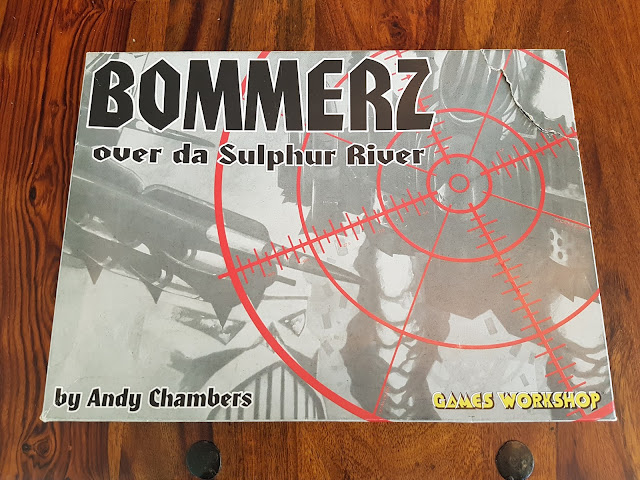 It was brand new and un-punched when it turned up, so the idea of actually putting it together felt wrong. However, I bought this game to play and that was what I was going to do. 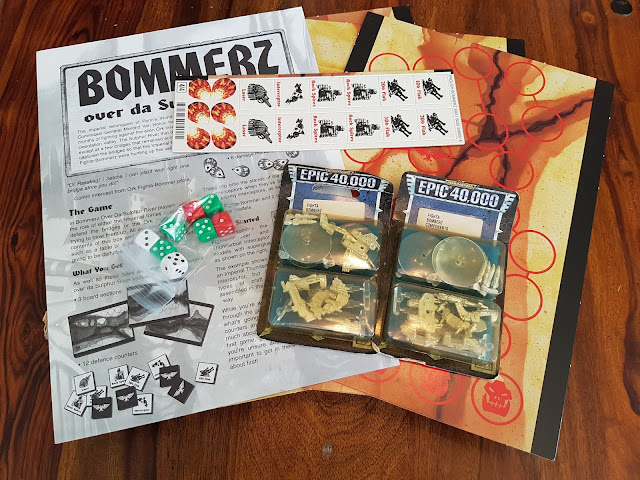 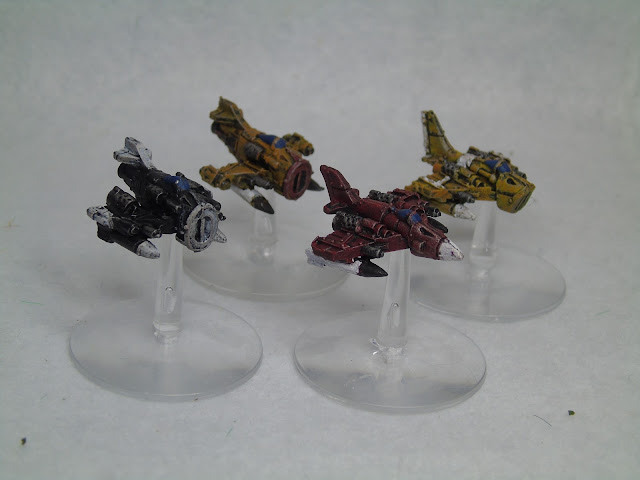 I kept the colour schemes for all 6 planes pretty simple, the orks in a variety of colours*, while making sure the planes were an uniformed mix of colours. The Thunderbolts were given the same scheme as my 28mm Thunderbolt.


* My fledgling Ork army is
mostly yellow, so I gave two
of the planes that colour. 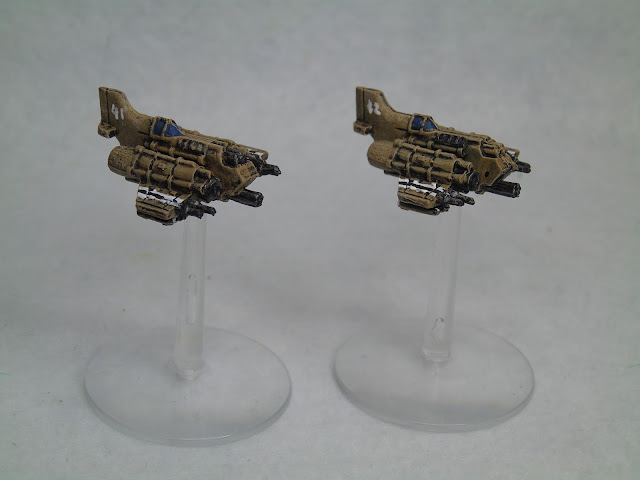 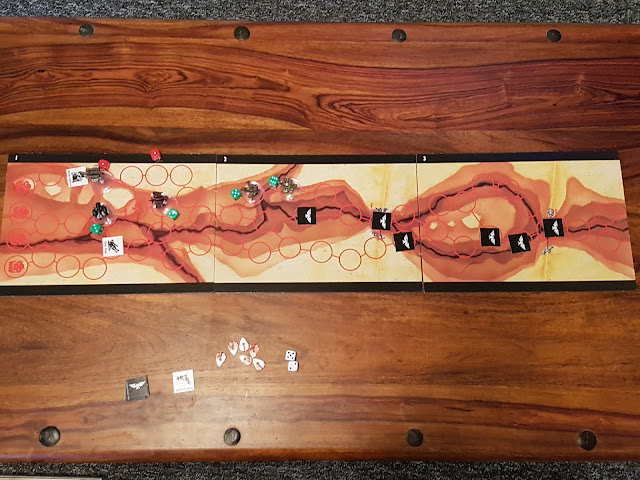 I have now played a quick run through and it really isn't a bad game. It is very simple, with the full rules being on three sides of A4 which is definitely the direction that I am starting to look for game rules. 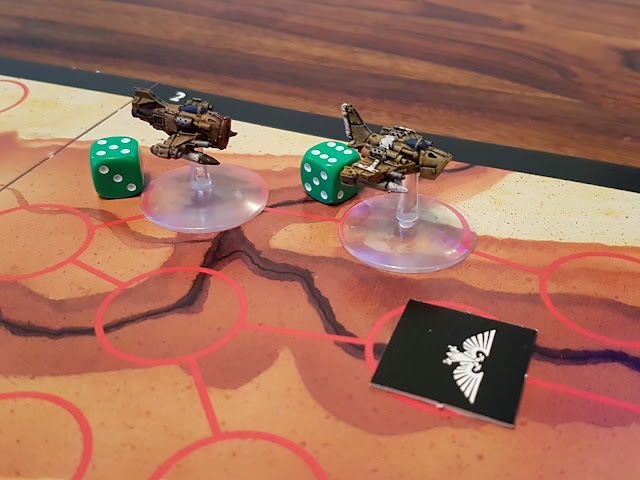 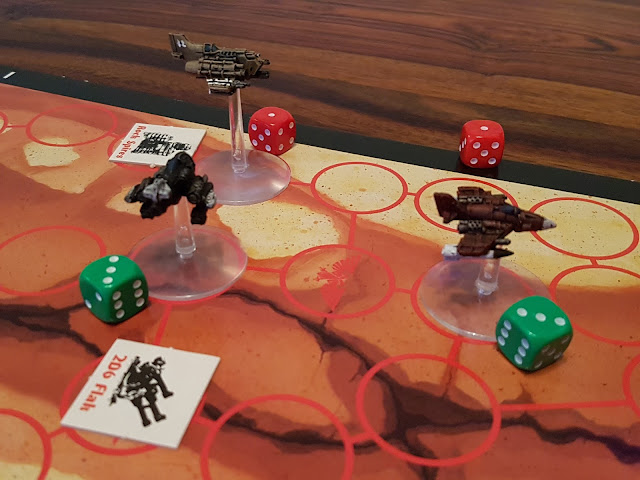 With the game including a running series of dog fights (which the Thunderbolt eventually lost), an epic bombing run attempt on the first of two dams by three of the four fighta-bomberz and flak guns firing into the sky, it does scratch the itch feeling like the sci-fi version of the dam-busters that it is. The Orks did lose the game in the end as it turns out a 3D6 flak gun on a dam that already has a 1D6 flak gun on, make light work of the Ork planes. 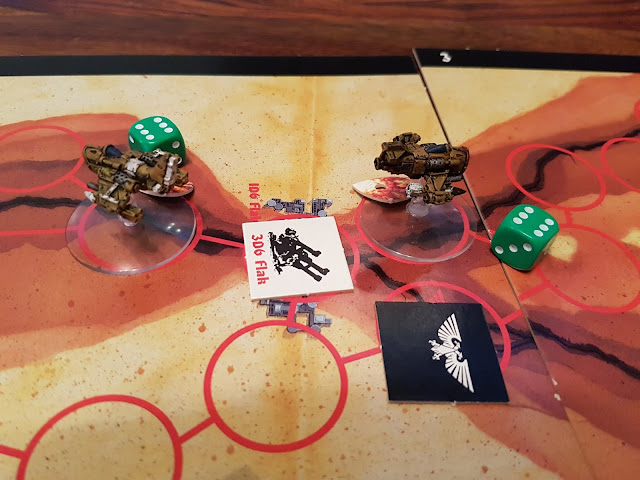 Email ThisBlogThis!Share to TwitterShare to FacebookShare to Pinterest
Labels: 40k, Board Games

It turns out I can't even stay focused on something that wasn't my main focus. Deviating away from the British Napoleonics into completing the first wave of Imperial Assault and then I paint a character from the second box set and a figure pack from the 8th wave, instead, but I have an excuse, I had an idea on the character's colour scheme and I wanted to him done while I was both motivated and inspired. 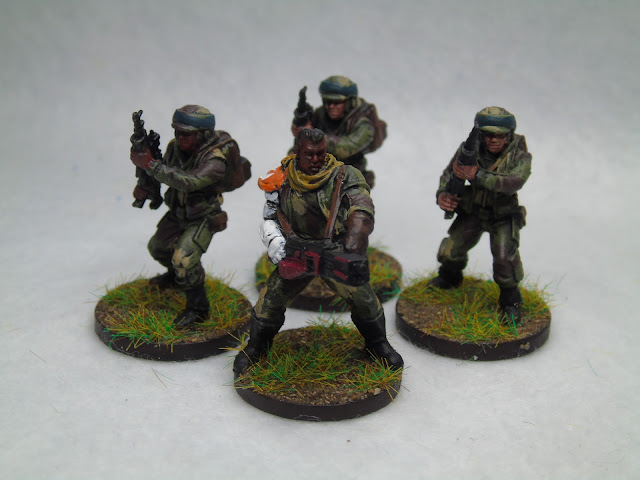 As I have said before, my aim with the camo scheme is to try and create a group of rebels that look like a unified assault group for those missions that a bit more take and control than the campaign games in the box set. My theory is, in games of skirmish the imperials will mostly be stormtroopers so their rebel opponents should have a theme running through their kit even if it isn't a uniform (thinking battle of Endor or the end scenes from Rogue One).
I just couldn't get the lighting right in the photo below but the force is coming together. I think another unit of rangers and it will be done, although I want to try a game out before then to see how the skirmish side of the rules plays out. 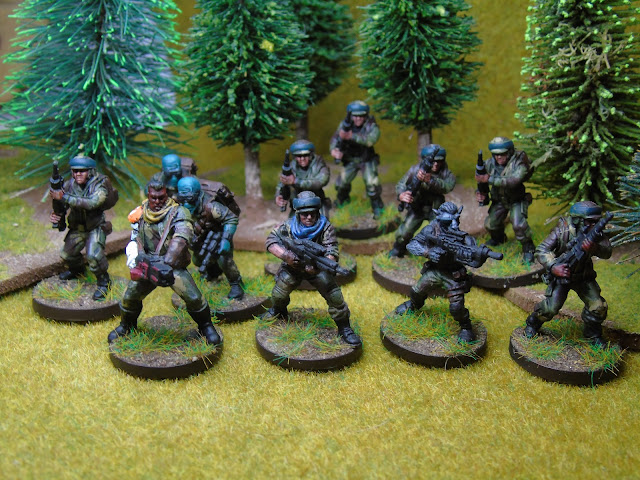 There are 40 Napoleonic British red coats sitting on my painting desk, but after the heat of last week my painting mojo died and my painting board spent nearly a week languishing in my man cave untouched. In an effort to get me painting again I have gone back to small projects that I can get quick results out of and chief amoungst these is still Imperial Assault.
Carrying on with my aim of having the whole first wave painted as soon as possible the Nexu found their way into my immediate to do pile. I hadn't painted these as looking online there are so many colour schemes all based on either pure imagination or on the various types of nexu in the Star Wars fluff. I found one scheme (that I think was based on the nexu in the second film) and it set me straight to painting. 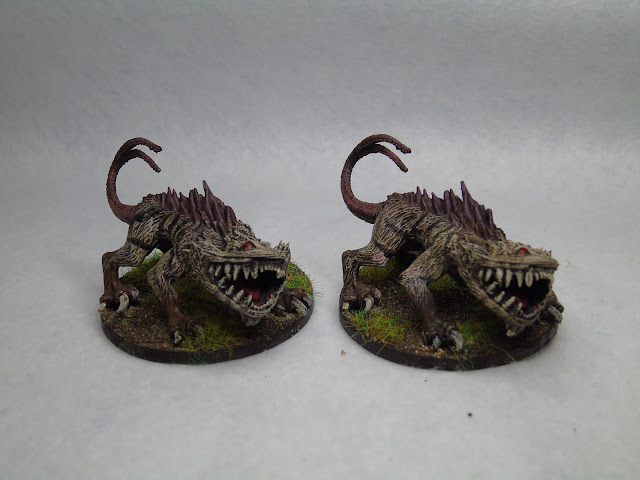