In the mind set of doing something fresh, I have gone back to an old, worn project that just needs a bit more love to get over the finishing line, plus, I am really enjoying painting them, my Hervictus 14th.
While, this year's work on this project has been entirely focussed on the 3rd platoon, these guys were in fact bought a couple of years back for my second platoon and will be fielded as such, the causalities of the mind set of being so close to the end of a project that you can do those last few models anytime you want, before they are subsequently forgotten.

I have 7 models left in this project* so I am keen to get started on the last step.


*Before I buy more as ever. 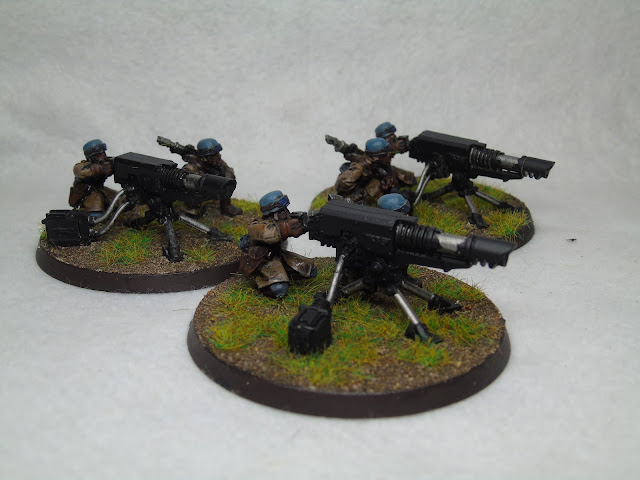 I've got my first ever weekend gaming tournament booked for the end of October and I am really excited about a weekend away, playing games. However, the last 9 months of always having a 30k model sitting on my painting table, even if it was behind something else in the queue, is starting to get a bit tiring, so I have decided to get the last big unit I needed for my list finished, then give myself a break of a couple of weeks to refresh my palate and let me dive back in again to be finished on time (only a few models left).
This is the second unit of Sons of Horus Breachers I have finished, although this one is 5 men bigger and is planned to be a solid defensive unit to really just hold that objective. 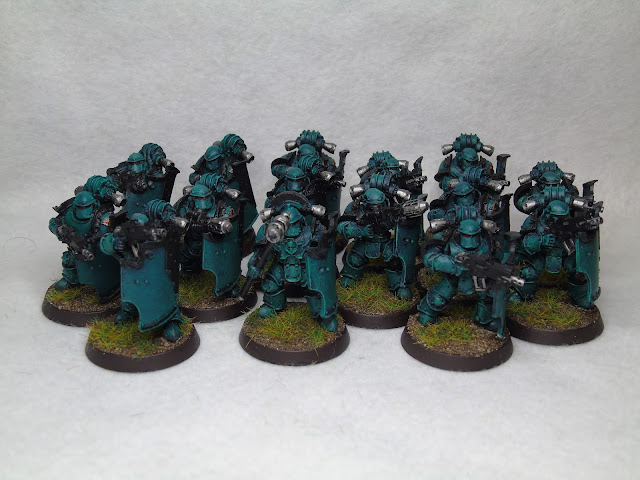 I had some spare time in the afternoon on Sunday, so I settled down with the aim of putting the base colours, and maybe a quick wash or two, on a few of the last squad of my Hervictus troops so that I could quietly get them down in the evening after work, and then I realised I had not only finished the normal batch of 5, but the full 10.
By my reckoning*, I have 2 heavy weapons squads of 6 men each left to paint for my basic platoons, plus the odd straggler who might turn up in a bits bag or something where I have had a bright idea, but in terms of getting projects finished**, I am now ever so close.


*As ever, these numbers are liable to fluctuate
**Are projects ever finished? 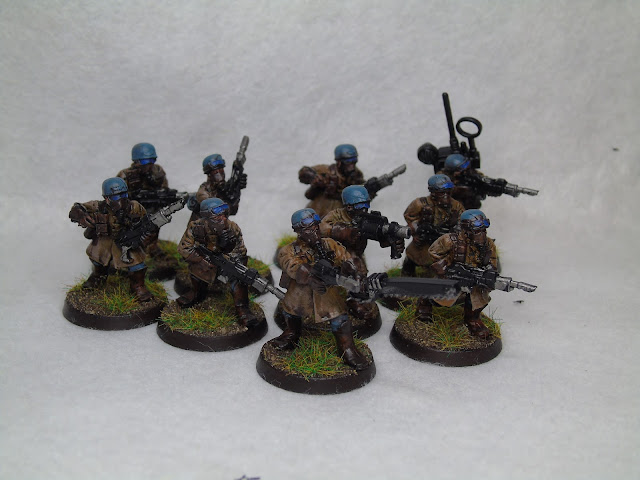 Thanks for reading
Posted by Mike C at 09:29 No comments:

My hobby output hasn't been up to a huge amount so far this summer, while I blame the heat and a lack of motivation, it also has to do with how busy our weekends have been recently. On the whole, I leave my wife to post about our weekends on her travel blog (thingswelearntin), but every now and again something comes along that feels appropriate to post on this little hobby blog and visiting the site of the Battle of Naseby felt like one of those times.

I'm not going to go into detail on the battle as there is a wiki page for that, plus loads of other (better) sources, but it was a pivotal engagement in the English Civil war and was a site where both Oliver Cromwell and King Charles were present and it has got me thinking about a potential English Civil War project for later in the year*?


*My copy of Pikemans Lament has now turned up 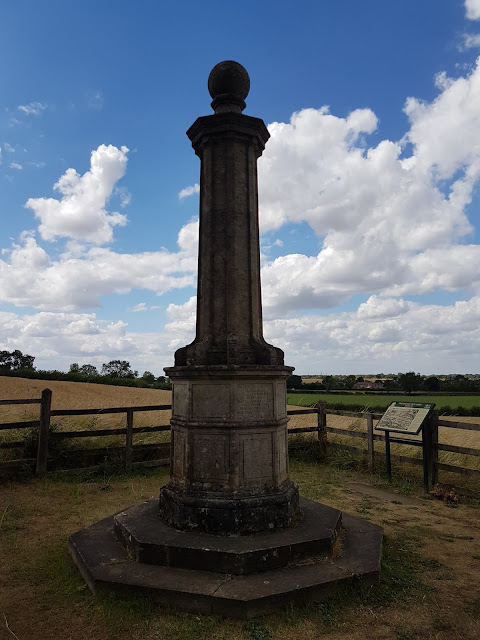 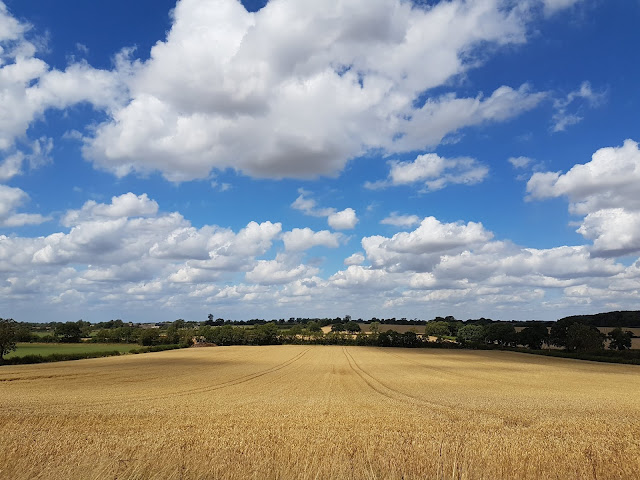 Thanks for reading
Posted by Mike C at 12:48 No comments:

While I get on with my Hervictus Imperial Guard project, I am also carrying on with my other projects, my Sons of Horus still being amougst these. My 30k backlog has become fairly substantial*, partly because of my lack of motivation over the summer and partly because I had the chance to get a chunk of plastics for silly cheap as they will always be useful, however, this has made the box it all sits in a tad daunting, so I thought I would take the opportunity to get a couple of the bigger models built and painted and free up some space.


*If ever there was an understatement, this is it 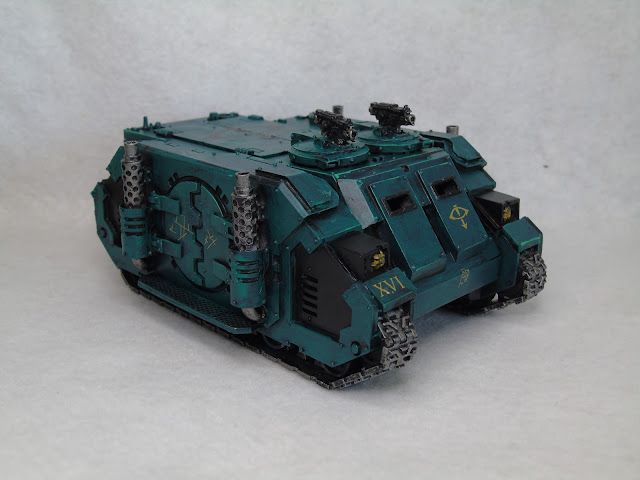 While later in this very post I will explain why I love the idea of land raiders in 30k slightly more than rhinos, these all purpose little transports still hold a very important place in my long term plans for this army.
This is the second rhino in my army as I am going back through what units I already own and I am now focussing on redundancy and squadrons. My gaming theory always relies on pairs of units doing the same job, you lose one unit and you know there is always a backup, something rhino chassis' do extremely well. 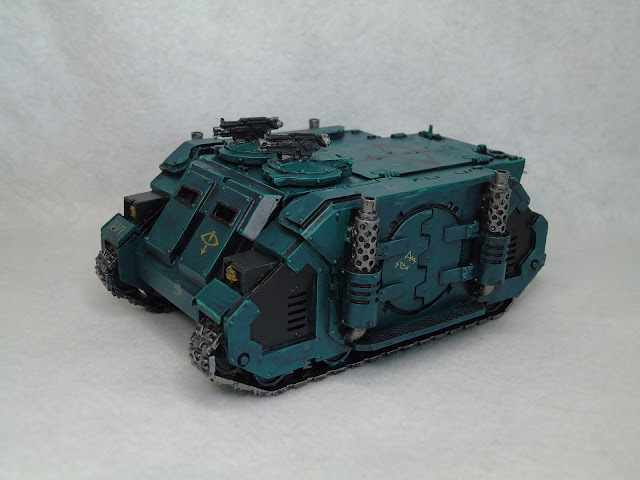 The last despoiler for my despoiler squad. The axe is from a World Eater kitand makes the model look pretty intimidating. 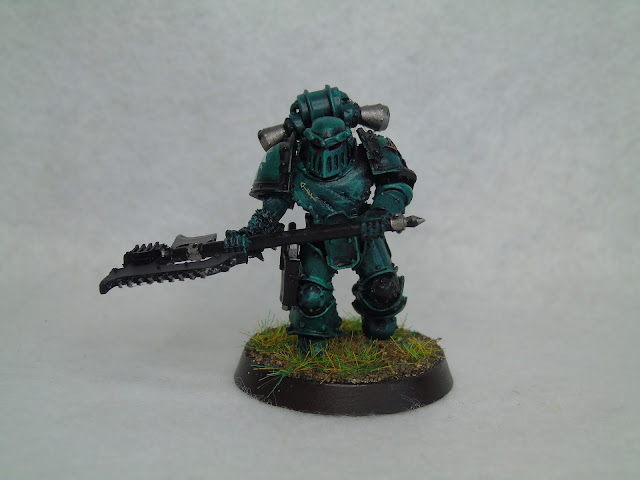 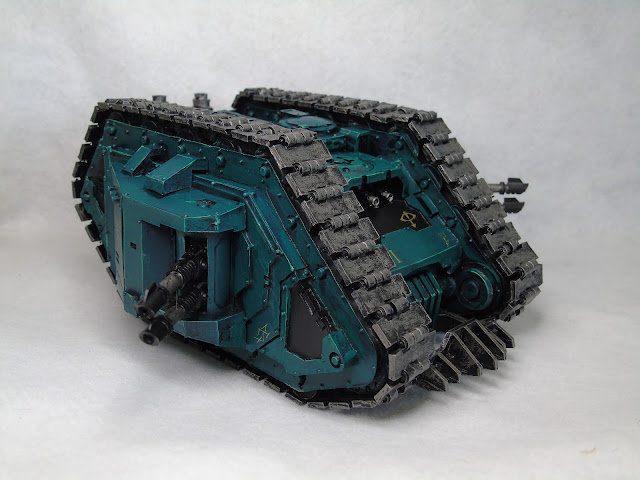 I've never been a big fan of Land Raiders in 40k, I love the fluff and the idea of them, but in my head 40k is either small platoon sized armies (my heyday of gaming before I went to uni was all 1000 point games of 40k) where land raiders are just too big, or apocalypse sized games where they almost become too small (?). Step into heresy and all of a sudden land raiders make sense. Gone are the limited numbers of the vehicle that the space marines have access to and gone are the restrictions that they are basically the terminator's rhino - now I can run tactical squads in them if I so wish.
The next big change to my mind set was the Land Raider Proteus, it was a weird looking tank that I couldn't get my head around when I first got into 30k properly - hence why my first land raider was the more familiar MKIIB -  but the Iron Hands vs Emperor's Children display at Warhammer World really changed my view on the Proteus and the video below cemented my new view that actually, I really did like it (it really is worth a watch). 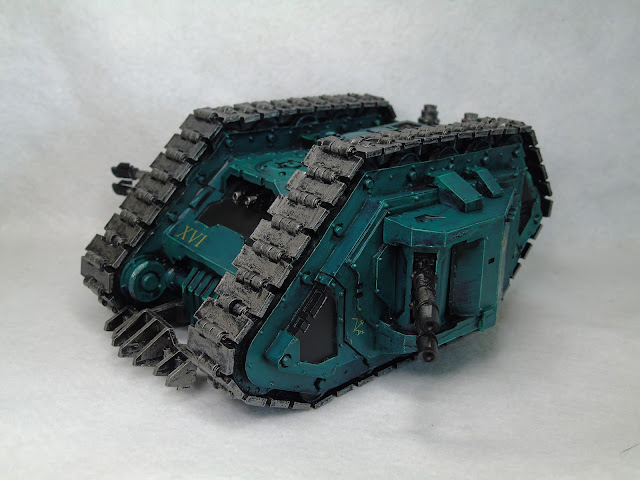 It's been a slow summer in terms of hobby (I kid you not when I say I have painted 21 models since May - including the models from the last post), but I feel like I have turned a corner and my motivation is back.
Of the 35 models that make up my 3rd platoon of Hervictus infantry, the first 15 were on the last post, below I have the next 10 finished and the last 10 are built and just waiting on a quick black spray and their turn on the painting desk, leaving only another 12 specialists and any other odds and sods that turn up. The motivation to get this project finished is currently looking good. 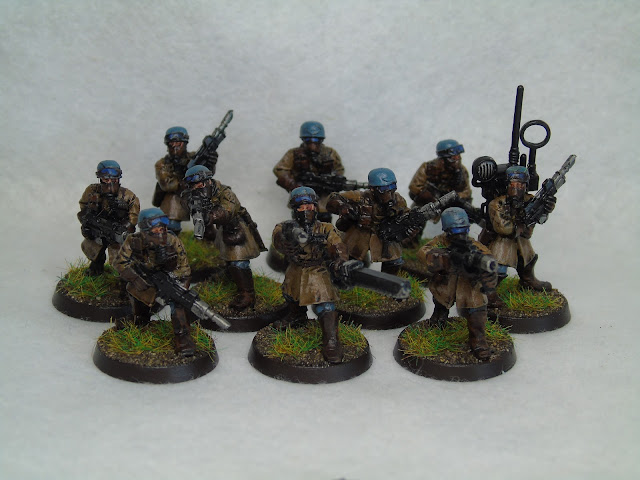 Thanks for reading
Posted by Mike C at 08:27 No comments: