The last two batches of highland clansmen were always going to be in a more historically accurate tartan* and I had the batches split up on movement trays ready to paint, but in an extended session pushing Edward on a swing, I realised that if they were all going to be various shades of brown, it made more sense to just do them as one big batch and damn the consequences. I hate doing big batches**, but sometimes they just make sense, so in this case I set aside any notions of the speed in which the batch would be completed and knuckled down.

**and yet keep coming back to them for some reason 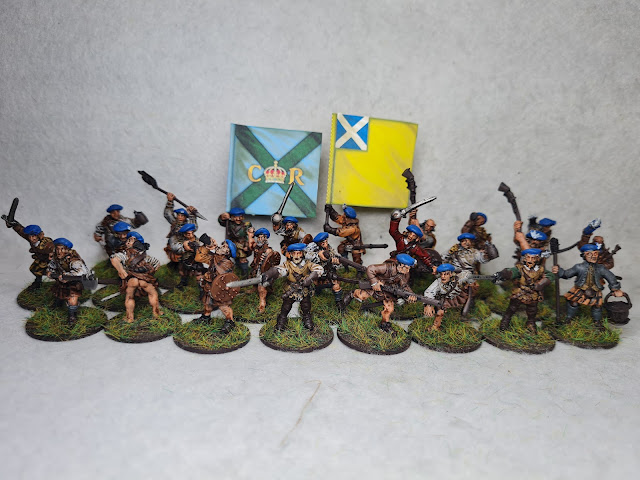 Finishing these means that all my planned clansmen are now complete. Four units of regular clansmen and two units of commanded shot for Pikeman's Lament or five units of "natives" for Rebels & Patriots. All I need to paint now to complete this army is a cannon and limber (crew being done in the clansmen batches).

In the fullness of time I plan to buy a couple of units of lowlanders to provide a more stable shooting line and probably a couple of units of Royal Ecossais, although I am a tad nervous that if I buy, what are effectively French infantry for the Seven Years War, then all I need is a cannon and some cavalry*** and I have another army almost by accident****.

***Cavalry which would also be appropriate for this project . . .

For Religion, King and Kingdom

When I visited Marston Moor in 2020, I'd just finished two sides for ECW, played my first and only games of the period and was busy buying up boxes of figures aware that with lockdowns and a kid on the way, a backlog wouldn't hurt. I came away from the battlefield as inspired as you might imagine but also having learnt how important a role the Covenantors had played in the war, so I was still in sight of the battlefield when I placed an order for a box of Warlord Games Covenantors*.

Two years later and I feel like the box has matured quite nicely, so it's time to crack it open and get to work. I'll go into detail about which regiment these are once I do the pikemen, but for now they are wearing the favoured Covenanter grey jackets and blue bonnets. 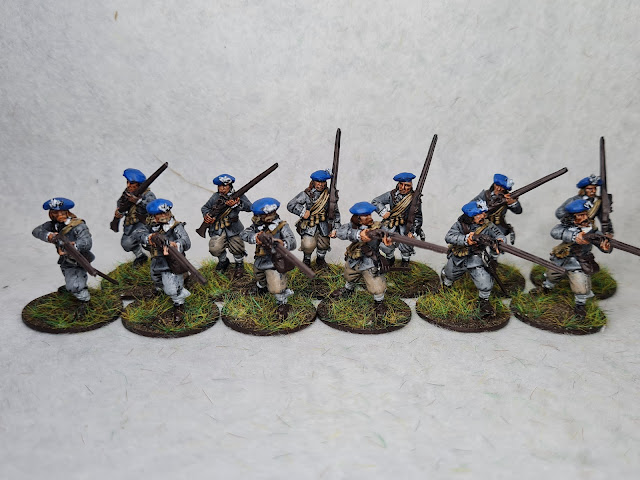 Also, it was quite interesting on my last post that I got picked up on the phrase "our king". I can only assume I ended up on an anti-monarchy facebook page somewhere as my page views sky rocketed with anti-monarchy comments from anonymous posters. I explained to the first one my view point and why I had used the phrase, then as I received about another 20 or so over the next 24 hours, some of which were getting fairly nasty, I decided to delete all but the first comment.

I suppose at this point I should probably thank the commenters as they have helped my blog's SEO - not something I care about, but never hurts.

Hot on the heels of the last batch is another, this time in my attempt at Stewart Hunting Tartan, something our new king has sported himself on numerous occasions according to my research. 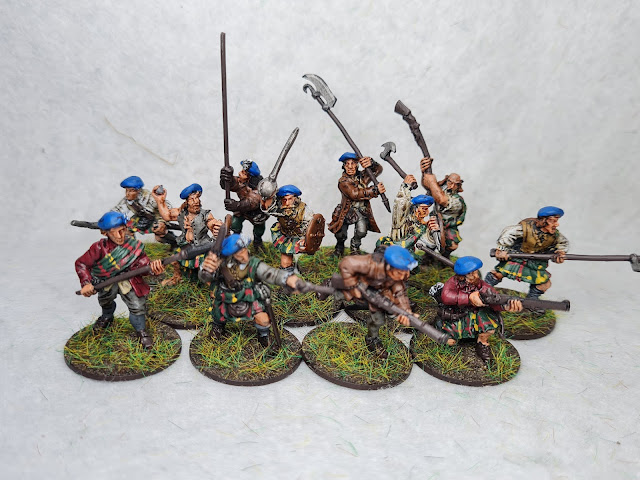 Again an empty flag pole as I'm waiting on the flags*

I also ended up with a little Warbases order recently and I added a couple of packs of highland cows to that delivery, working on the theory that they will help place the game in Scotland . . . 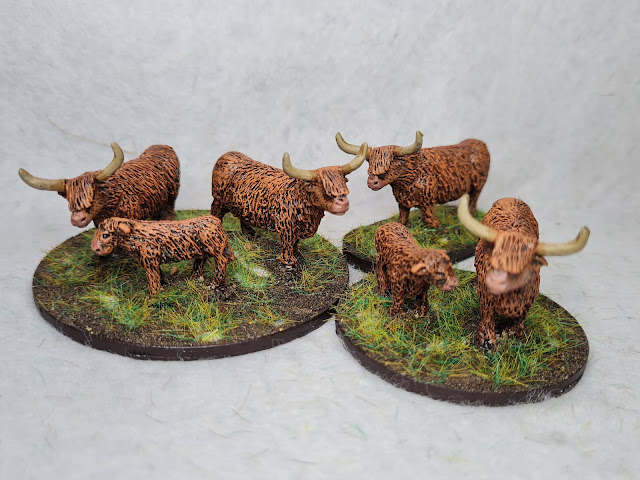 I'm well over half way on this project now with only two batches of clansmen left to go, but I can feel myself losing a bit of steam on it. The next two batches are both built and sprayed ready to go, but are going to be in a slightly more muted/earthy tartan as I have been painting (purposely) anti-historically bright tartans so far, I'd like to tone them down for the remainder of the project, so I might have a look at the other side for a little bit to have a break before coming back to finish this off.

With a week or so off of painting with a trip to the Lake District and Hadrian's Wall, I'm back to painting my Highlanders. My next batches were always going to include some sort of royal tartan but with the current news it felt right to push Royal Stewart Tartan up the painting order.

*ish - actually 2 boxes and some extras 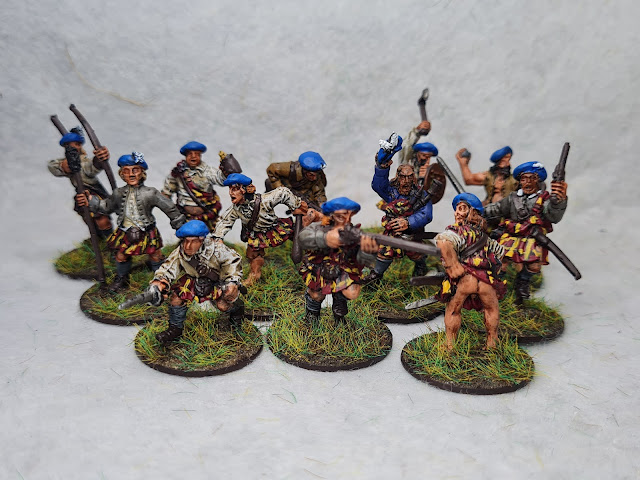 As with my first whole box, this batch of 12 will be mixed between different units and will be used as clansmen and commanded shot for ECW using Pikeman's Lament and mixed Natives units for Jacobite Rebellion using Rebels and Patriots.

As always, I have about 20 projects I want to be getting on with, so I'm going to just knuckle down and get painting.

In a surprise twist to my painting schedule, may I present the start of Scotember, a month of Scottish themed armies*. I have 2 and a half Scottish armies to paint up and as I have been reading a series called The Rigante, which starts as a fantasy take on the ancient British and ends up being the Scottish Highlanders in the English Civil War, I thought I would take a look at some projects that have ended up being pushed right back due to a lack of deadlines.

*although, I might add some other stuff on if my attention starts to wain

The first army is a Highlander army for ECW and for the Jacobite Rebellion. I need about 60 tartan clad highlanders for the 24 point Pikeman's Lament force, which works out at about 3 packs of Warlord Games' Highland Clansmen**. I had planned to paint them as a single clan army, but the more research I did, and sorry to any Scots reading this and shouting at the screen about the idiot Englishman, it doesn't seem like clan tartan was a thing in this period and it was more a range of tartans that were worn as part of the culture. So I plan to paint a mix of tartans - although based on real modern ones for simplicity - and then mix the units up, so the first box I painted in the same tartan as my Napoleonic Highlanders***, in the colours of Cameron of Erracht.

**plus change to make up numbers

***more on them later (hopefully) 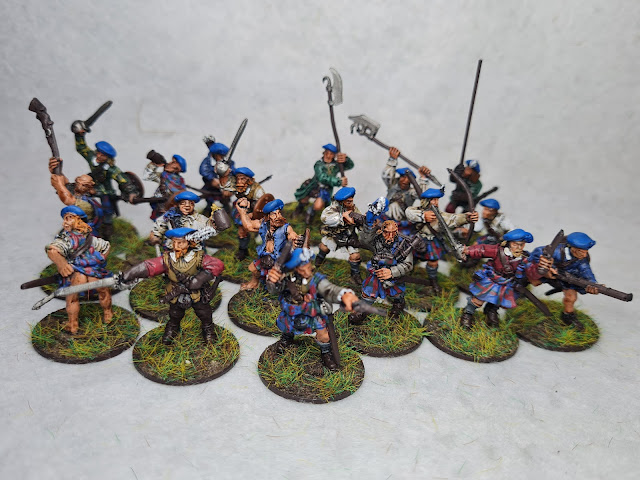 The bannerman doesn't have a flag on his pole as it is in the post. The plan with these (especially as I have more bannermen than I need for a normal army) is to have a mix of ECW/War Of Three Kingdoms and Jacobite rebellion flags so I can flavour the army as needed.

Carrying on with the same project, here are the two units of finished Ancient Egyptian Chariots. As the new edition of Lion Rampant suggests and following on from mods I've seen online, I'm using units of 2 chariots, so that each model is about 3 'wounds' to give a reasonable strength breakdown for the unit itself.

One of the things I've noticed in my research is that most of the chariots depicted in wall art aren't very colourful at all, with the odd exception, so I've gone for a middle ground of having colours but not being colourful*. And in complete disregard to the photos, I am more likely to have mixed units of chariot (a lighter and a heavy in each unit) than the single types I've photographed, but my point stands. 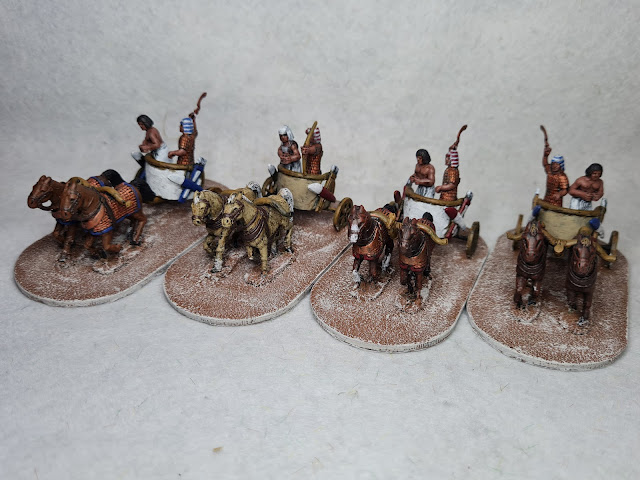 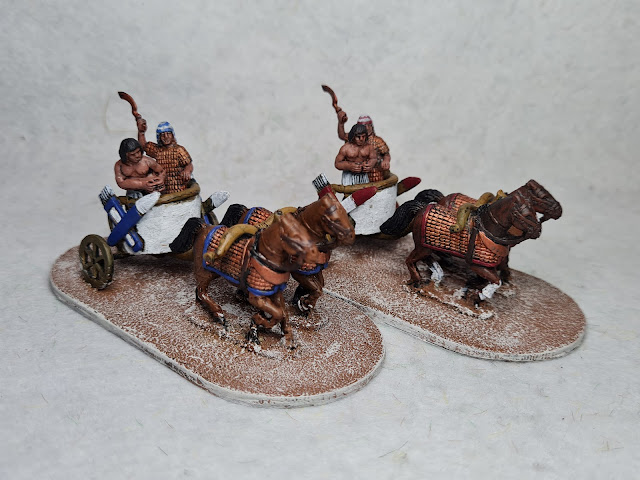 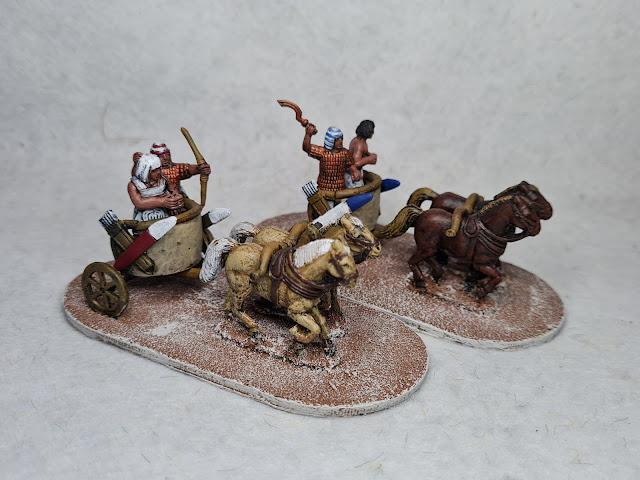 I've still got to finish the Pharaoh's chariot (almost finished) and the last unit of infantry, but this is now a playable army, so I'll need to get a game lined up for them and hopefully push myself to finish the last few bits off.

The Kingdom Of The Sun

With my big planned games for July/August out of the way and any potential games coming up not needing any major painting efforts it's allowing me to stop and re-evaluate my painting for the next few weeks. I have a few projects I'd like to be getting on with but with the Lion Rampant 2rnd edition released and with it having official rules for chariots, I thought it might be a good idea to have an ancient army ready to test these out.

My New Kingdom Egyptians have suffered from being a fully metal army that I've just built and painted a unit at a time in between other projects, this has meant that there is never a second unit ready to go the moment I finish the one I am on and feel like keeping going. So, this time, I've built and sprayed nearly everything I have for them - will it help? Lets find out. 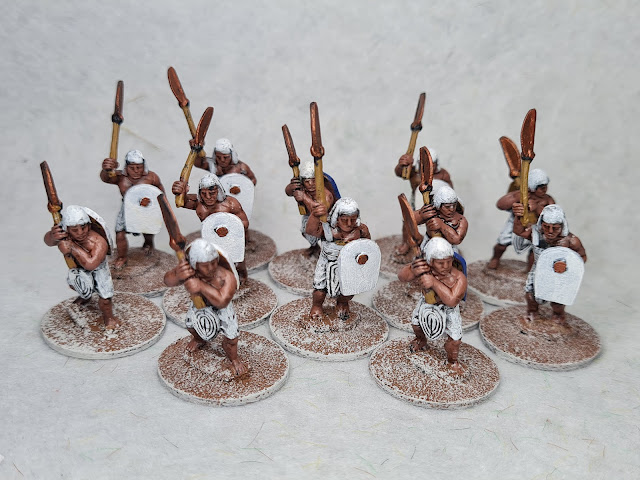 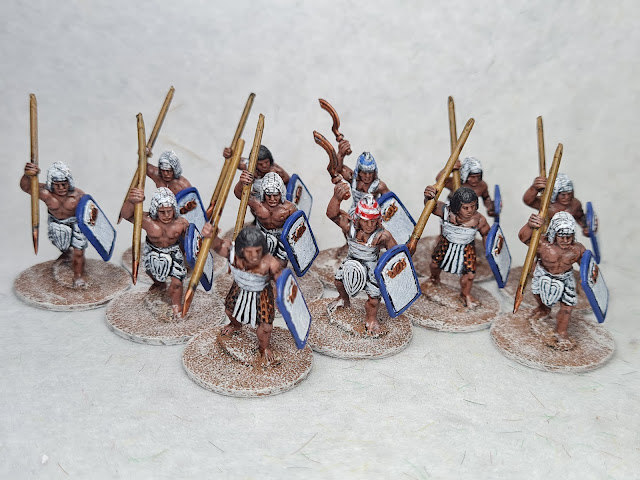 With these finished it leaves only a single unit of infantry - which is built but not sprayed - and the all important chariots . . .