On a crisp morning in early January, 6 players turned up at an incredibly cold lockup in deep dark Essex clutches boxes of 28mm Imperial Knights ready to throw them in the ring and see who was still standing at the end. The game was planned by The League of Legends wargaming club as a pure gladiatorial knight bash, each knight would score points separately but each player could bring as many knights as you wanted to be part of their team. Each knight would also respawn at the next turn’s movement phase to carry on the carnage. We decided to use Warhammer 40k 8th edition instead of Warhammer 40k 7th or Horus Heresy 1st as in 8th every weapon can strip wounds from other models, stopping some of the more infantry tasked knights being completely useless.

As we started the event there were 16 knights of all shapes and sizes including a handful of the forgeworld bigger knight classes, so the natural assumption was that they were be the runaway winners of the event. With this in mind, we picked our targets and started formulating tactics. 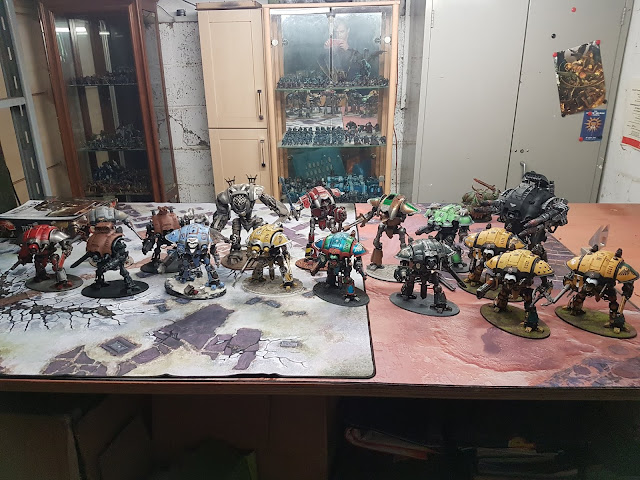 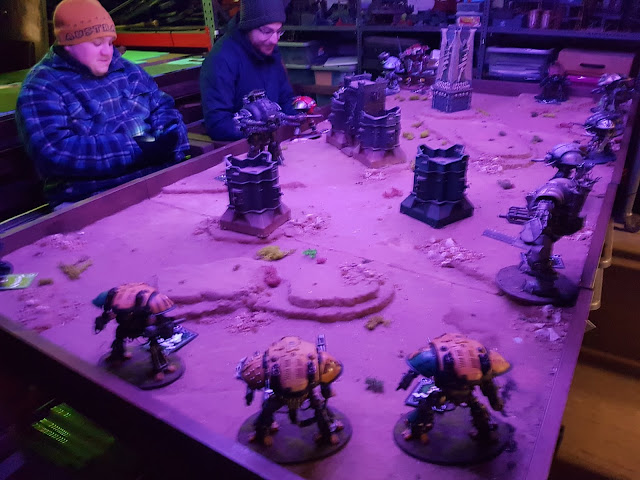 As you can see from the photo, it was less than tropical in the lock up, my choice of a single fleece felt like it may have been a mistake but it didn't dampen the game. 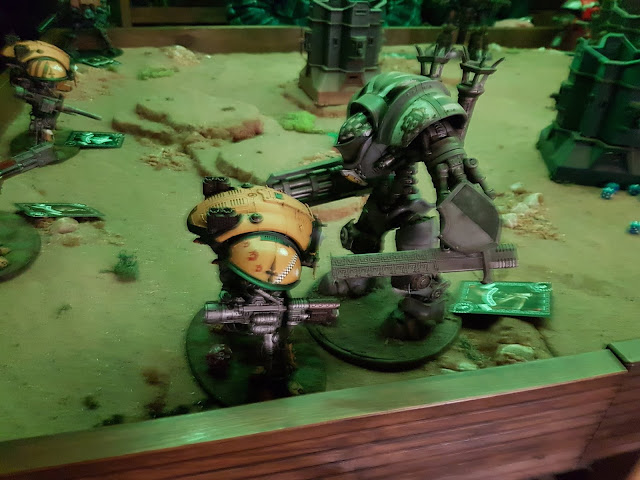 There were a couple of times where I had managed to clrat my half of the board before knights respawned and made it cluttered again. It turned out, that my trio was a pretty good choice to have in a team. 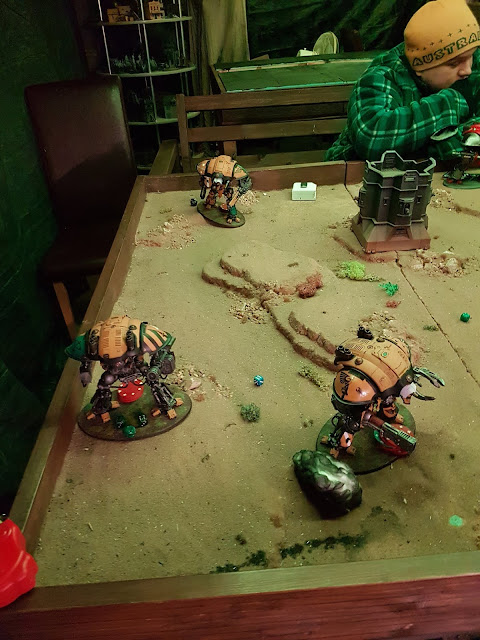 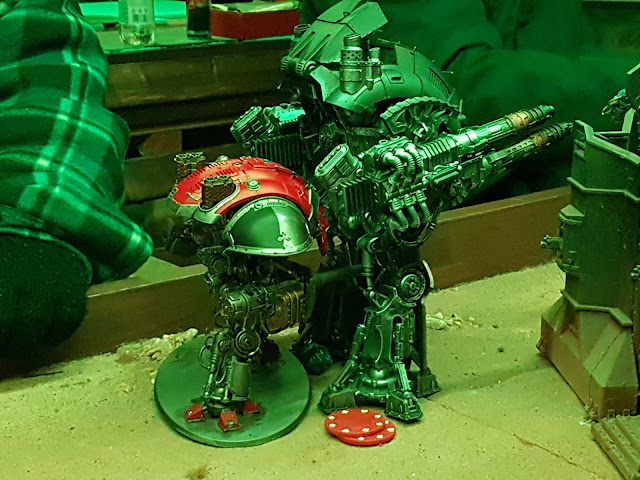 It wasn't even just me with the questionable tactics. 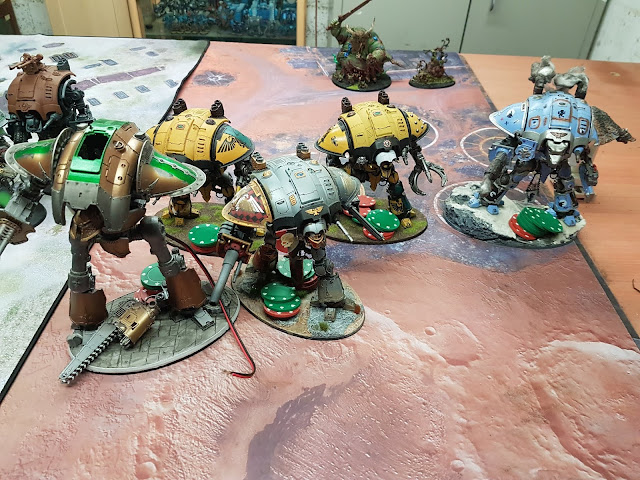 At the end of turn 6 we counted up the points on each knight to see who the winner was, and while I didn't win, having 2rnd and 4th places was amazing. Having lost each of my knights just once, and claiming no less than 6 knight kills between them, including two of the forgeworld sized classes, I was really chuffed with the day's gaming.
Lastly, seeing the top 5 only included one of the before mentioned forgeworld sized classes was also a shock, especially as 3 of the top 5 were paladins, which were didn't class as 'knight killers' but it all goes to show how when you start rolling dice, ‘Maths-Hammer’ can go out of the window.

Adeptus Titanicus was one of those games that loomed on the horizon and no amount of steel-y will or good intentions was ever going to stop it ending up in my collection, but I gave holding out a really good try.
The main problems with my will power when it came to this game were three-fold: 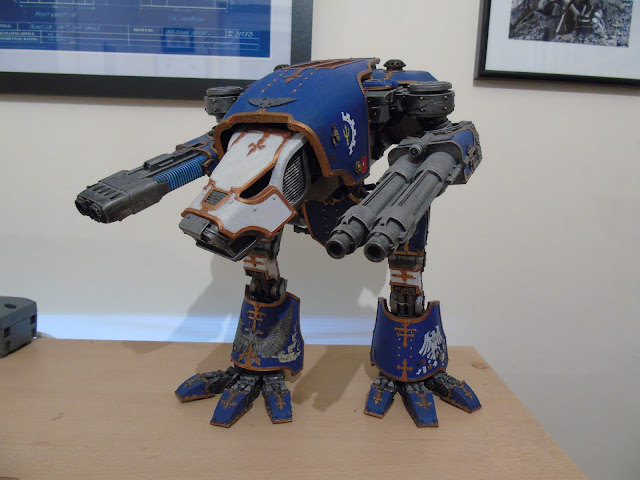 The 28mm version, Tracy, herself.

I decided to stick to the Legio names and colours that my background fluff has always been about - a homebrew legio called Legio Hasta, from the forgeworld of Hervictus (same as my 40k Imperial Guard). Hasta means something like spear in Old Norse and it very much encapsulates my titan legio's principles of war, focus on lighter engines (although they will have the bigger stuff in the future) and hit hard and fast to break the line - more fluff in the future. 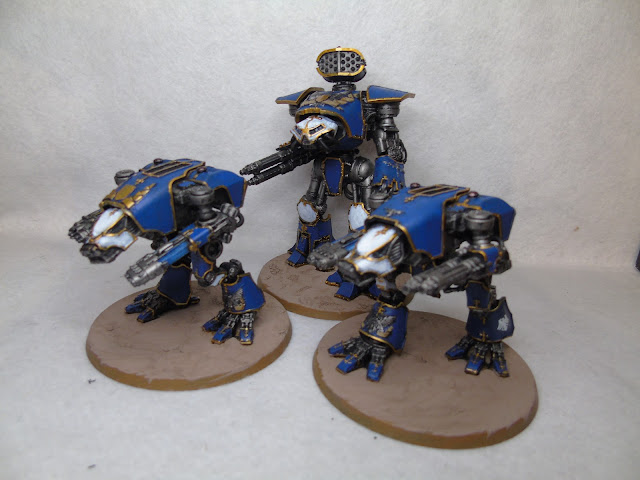 The start of my maniple. 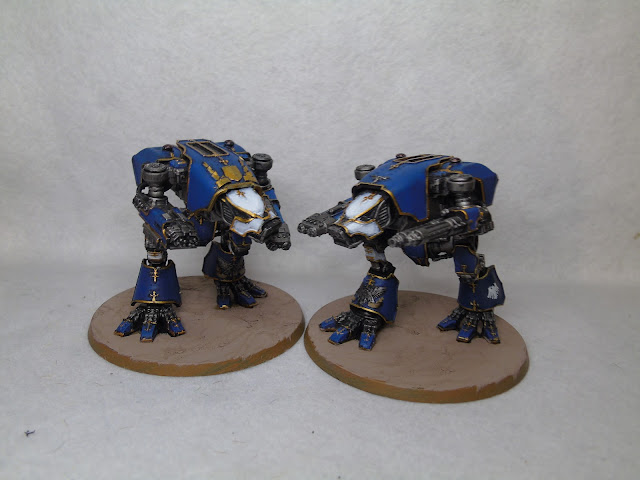 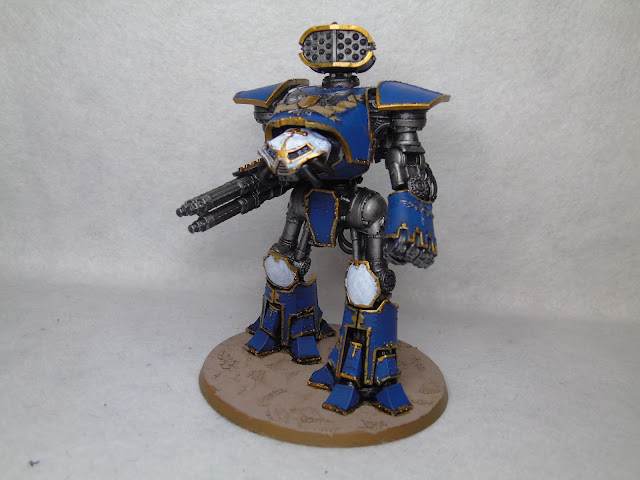 Last Tuesday my mate and me decided to give the rules a try down at Wayland Games, we weren't doing anything clever, simply using the same base engines, some scenery and bashing our way through the rules. As far as games go, neither of us showered ourselves in anything like tactical brilliance, but it was interesting to see what titans could do and what would work in the future***. 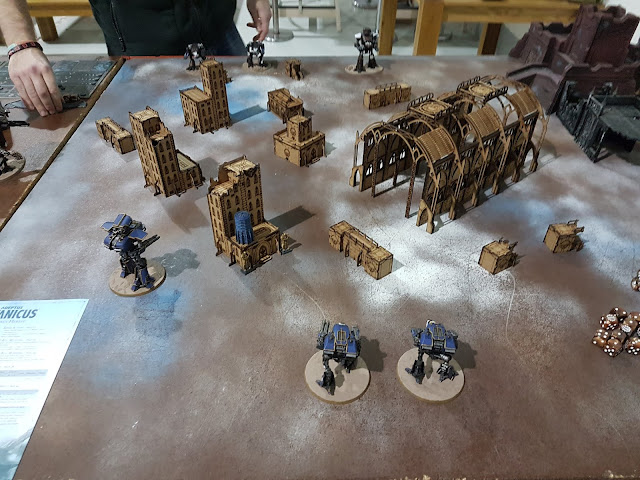 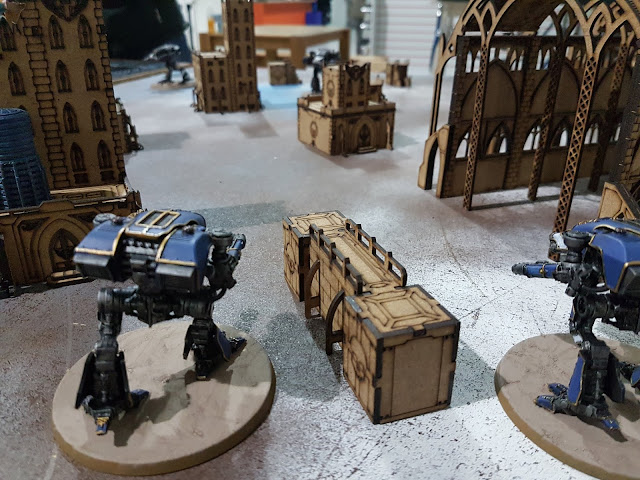 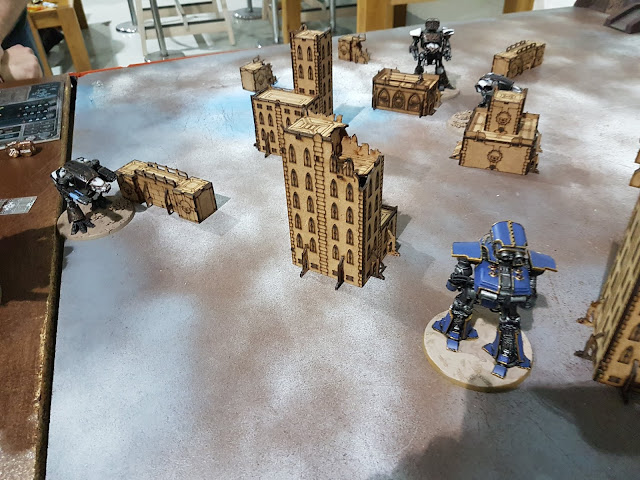 It was about this point it started to go wrong for my Reaver . . . 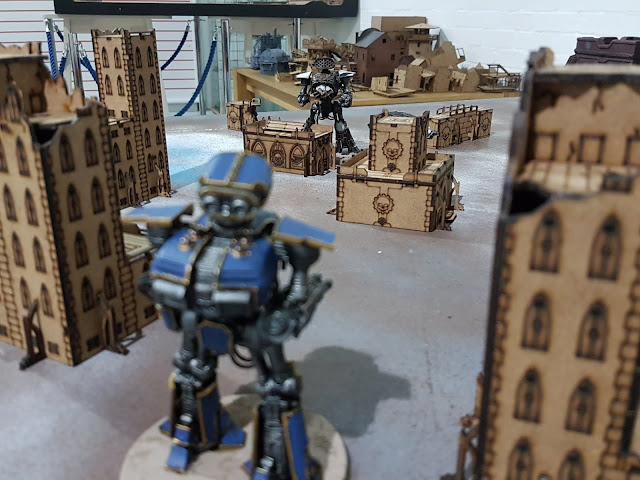 The end result of the game is we are very aware of how useful warhounds are (they are unlikely to kill your bigger toys but do not underestimate what they can do as part of a maniple. Also, it has to be said, that Games Workshop have made a brilliant set of rules with this game, you really do feel like the titan's alarms are screaming as you redirect power and try to get shields or weapons back online.

Supplying the capital was one of the most important strategic considerations that the Fascist Government Command faced if they were to win the war. While the London docks were more than able to deal with the demand that was being placed on them, Tilbury raising the Socialist flag was a major blow to the Fascist cause and had to be captured or destroyed as a matter of priority.
Early in the war Sir Oswald Mosley personally ordered that operation Scuttle was to be launched into Essex to capture Tilbury and the lands surrounding it. The first stage of the operation was a multi-pronged assault to divide and misdirect the disunited Essex factions before a full water-borne attack on Tilbury from the Thames herself.
But the people of Essex had been given prior warning and, while not working in concert, each group set to defending their domain. A few plucky local leaders went on the offensive, determined to take the fight to the Fascists, two of these battles would go down in local history as the Battle of Hockley Hill and the Battle of Barnard's farm.


With the history sorted, it was time to play the game. It was only in hindsight that I realised I hadn’t actually taken a photo of the whole board, but what can you do now.
We used Bolt Action 2rnd edition to get the game flowing nicely over the course of a weekend, and because my opponent isn’t a wargamer as his main hobby – board games and console being his main thing – I made the sides identical to make it easier to work out what we both had, so both the B.U.F and Albertines had 3 units of 10 man regular squads, with either a smg or lmg in, a smg armed officer and adjacent and a mmg to be the heavier support.
It made for a really interesting game with basic infantry squads being the kings of the game, as neither mmg really made much of an impact, which felt right for the period we were gaming. 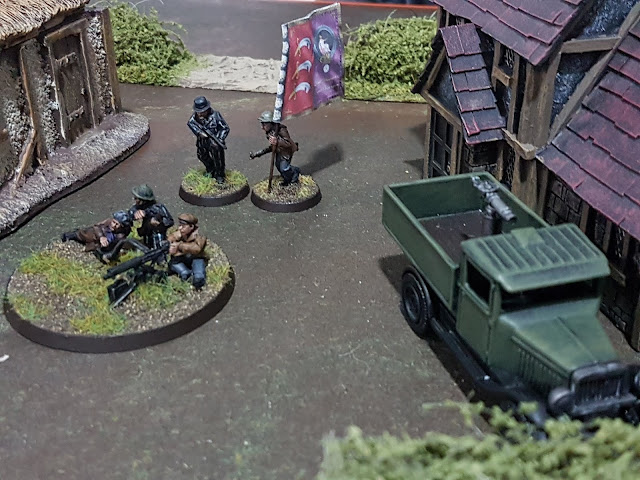 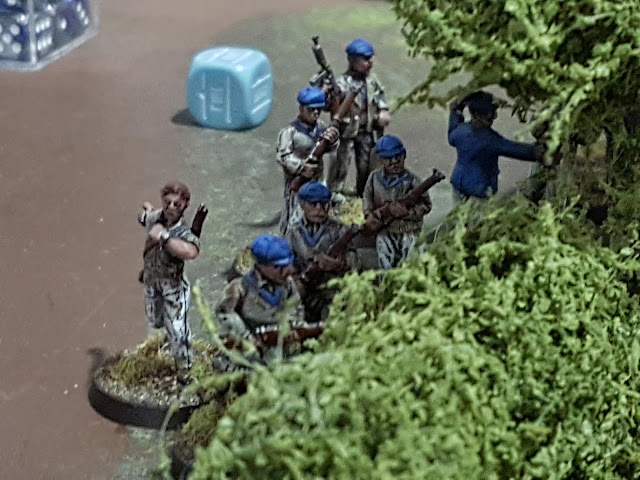 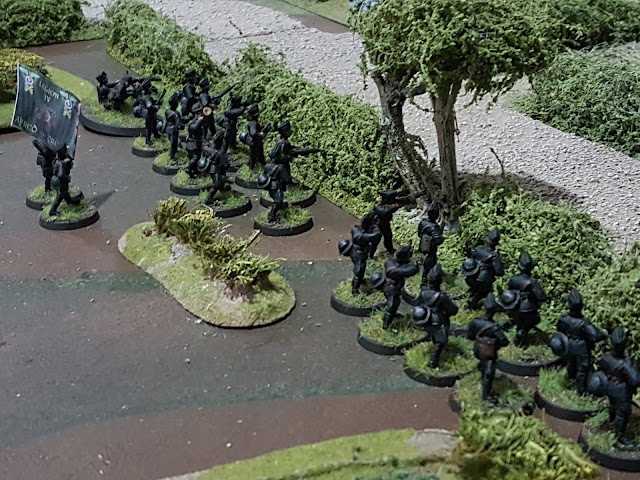 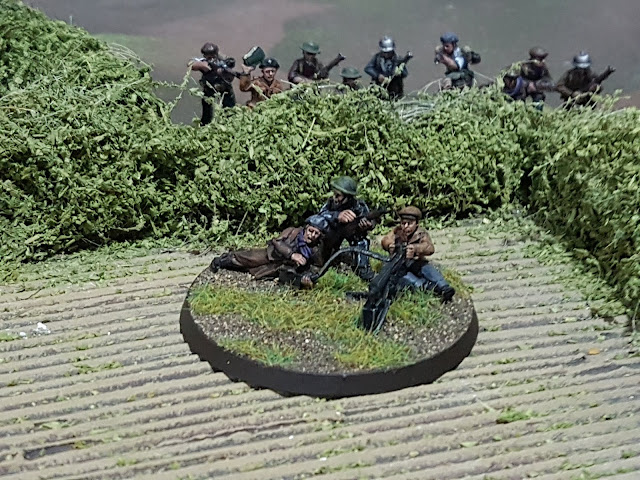 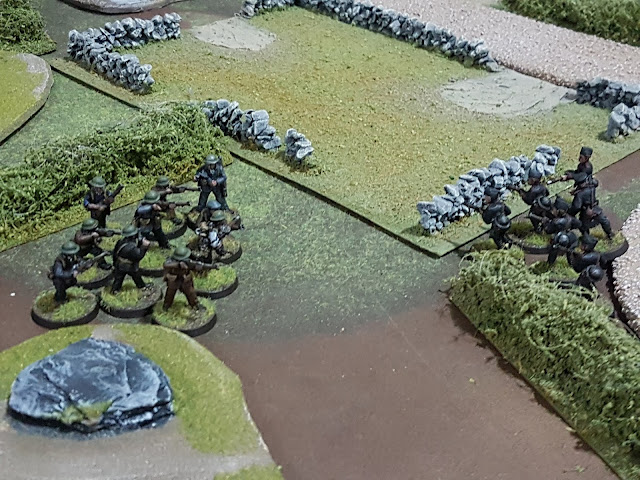 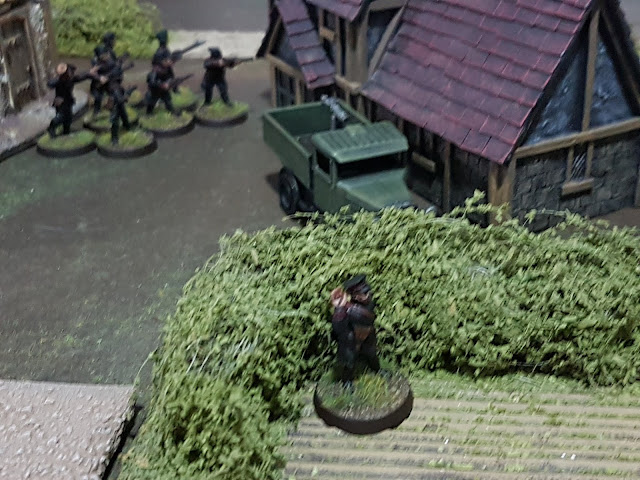 The B.U.F had an early set back; losing a whole squad within the first couple of turns but a 4th turn push up the board got the Fascists into a position near the farm that they, ultimately, could not be shifted from. The Albertines finished the game with models on the table, but without holding the important strategic location, so the way is open to Tilbury, but will the B.U.F have an easy time of it? 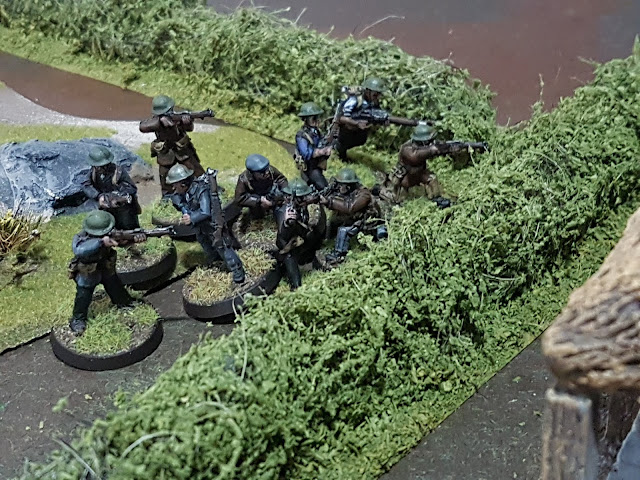