The festive period saw my first foray into Bloodbowl for a good ten years or so, the last time I played Bloodbowl it was in a GW store with a team I had picked up at Games Day a few months earlier. This time, I picked up a copy of the game with my brother, split the teams and got started with the painting as we decided a strict no unpainted models rule.

First up then, is my team: I picked the human team from the box, my brother wanted the orcs and the humans fitted me just fine. Once I knew I was getting the human team I then had to think about my team name and colour scheme and that stumped me for quite some time. I wanted a scheme that would stand out, wasn't blue* and that I would be happy seeing every time I played. The answer was so obvious once I realised what it had to be, it had to be the same Empire state I collected when I aimed to start playing Warhammer Fantasy - Ostermark with it's purple and white colours. The Ostermark Yetis were born.

* I always seem to do blue 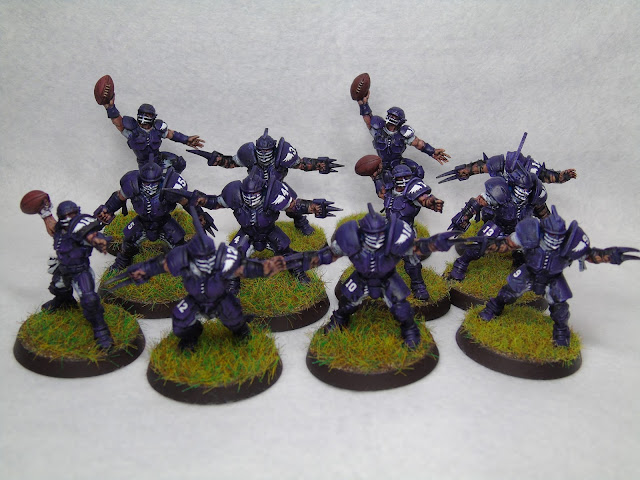 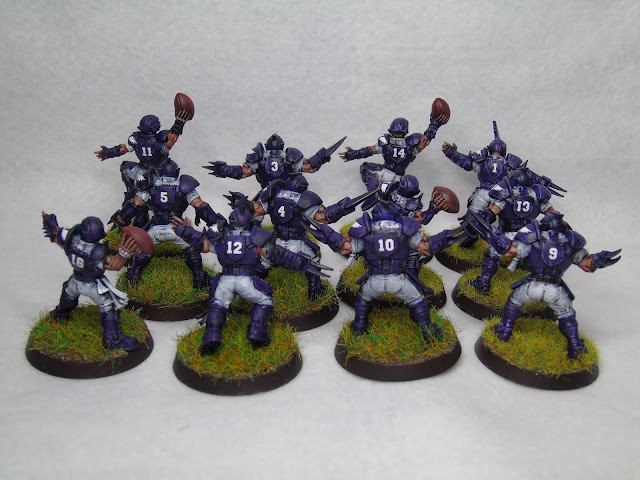 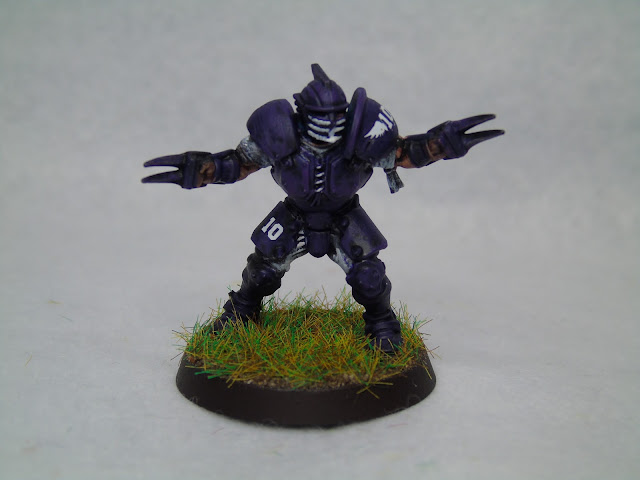 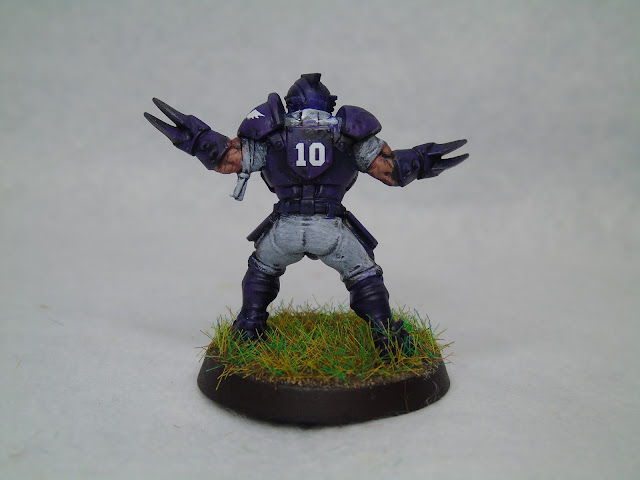 The first game was played on Christmas Eve at my in-laws house with my brother. My 'Ostermark Yetis' versus my brother's 'Skullers Friday' orc team. As you can see from my initial setup I wasn't destined to win the opening engagements of the game, but I got my act together, thought through a plan and went for it. The first touchdown went to the orcs on the second from last turn of the first half, he had spent 7 turns battering my guys before he finally managed to pierce a hole in my line to let his catcher through to score. 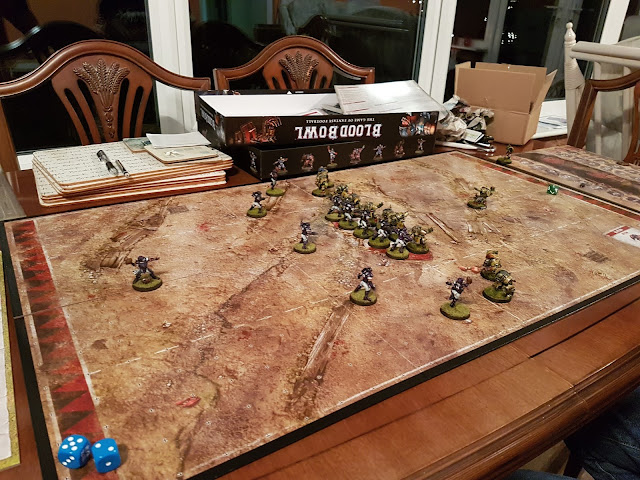 The second half started with the Ostermark Yetis receiving the kick, the ball was aimed for the very middle of the field but bounced a couple of squares away from a catcher who was ready to being a run with a blitzer in tow. With the added benefit of free move before the game thanks to a Blitz roll on the random events chart, my closest thrower was able to move to and pick up the ball, the catcher and blitzer were able to get into contact with the only orc in their way, so when the half started proper the blitzer was able to take the orc out, clearing the path, the thrower did a perfect pass to the catcher who had a free run nearly all the way down the pitch, scoring on the next turn after a nerve-racking dodge roll. One all.
With the kick going back to the orcs two turns into the second half, all that happened was a slightly quicker repeat of the first half orc point leaving the game 2-1 to the Skullers Friday orc team. 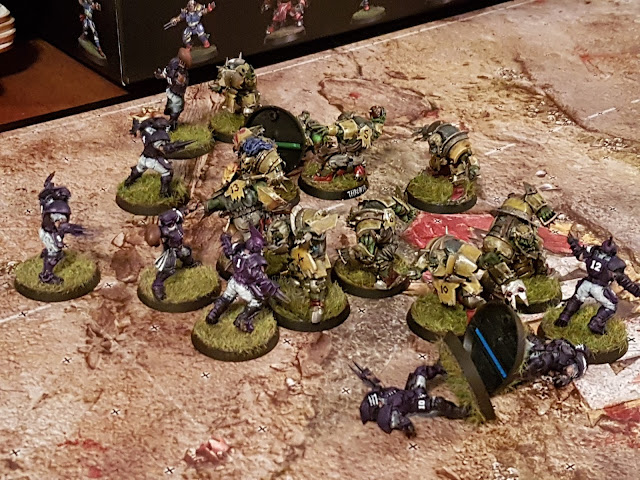 The game has reminded me why I used to enjoy Bloodbowl all those years ago, it has barely changed at all. I need to learn how to do more than just slow down a determined orc push, my team works best when they are actually playing football but I need to get the ball to actually do that, but that's all down to experience.

What was going to be a really light-hearted post about a toy car I bought on holiday a couple of weekends ago for my wargaming is instead going to be twinged with a bit of sadness. Last night the very Christmas market I bought this car in was hit by a terrorist attack and it is hard not to see the images when I now look at the model.

This post was going to be about sympathetic elements in Germany sending gifts across the channel to war-torn Blighty at her time of need. A couple of years into the civil war and the fighting is bitter, things like toys for children at Christmas time would have pretty low on the agenda, so the lift in moral that even a small gift could bring would be immense. Instead, it is them that need our sympathy at this time. 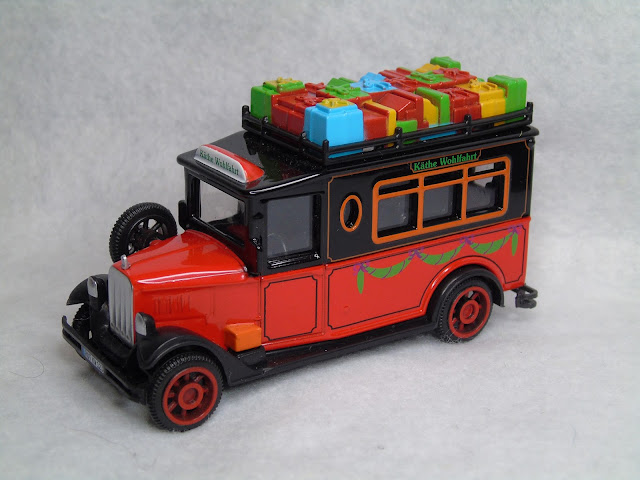 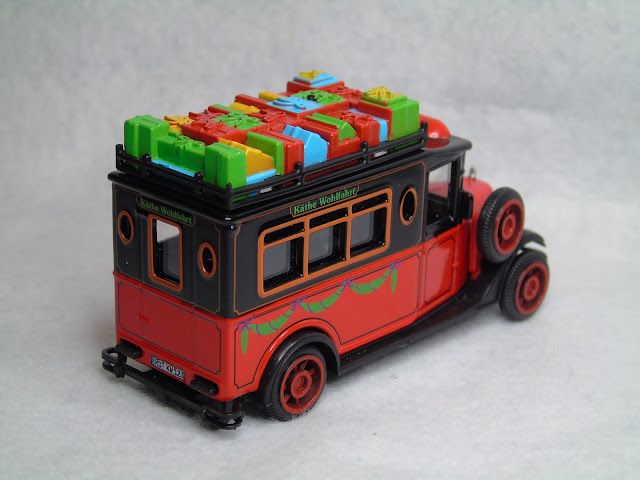 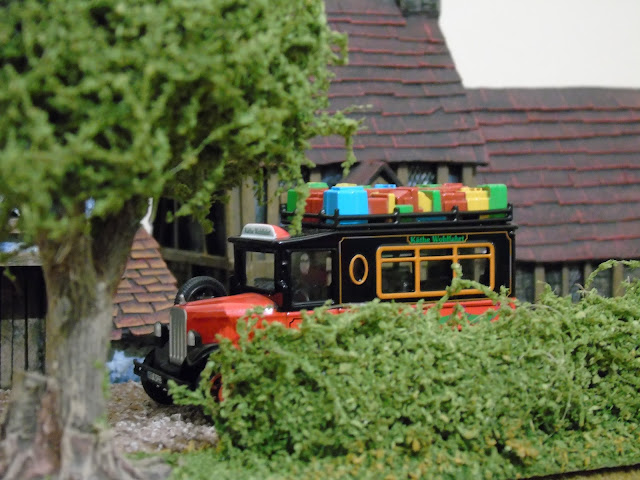 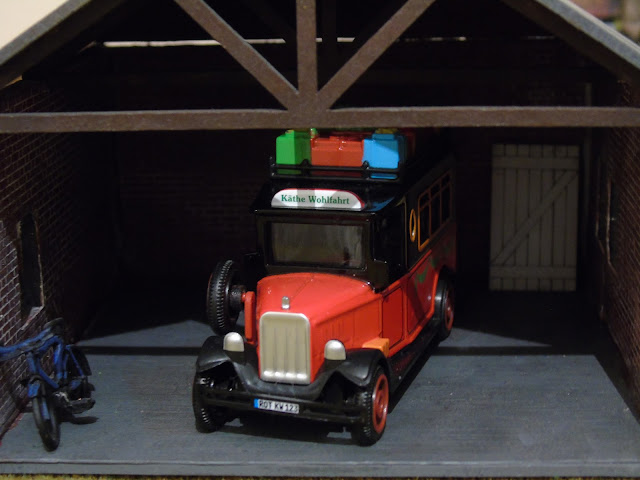 My thoughts go to the people of Berlin

It has been a few months since we last played this campaign (other shiny projects and real life distracting us) but we decided to carry on where we left off.
At the point we left off, my space marines - The Aurora Knights - had taken a pasting, losing 2 of the chapter's 4 strike cruisers and seeing the chapter's only battlebarge take enough damage to cripple it. The next 3 games went just as badly, with the remnants of my fleet being hounded around the system slowly losing escorts in every engagement without being able to do much more than scratch Dalin's defence fleet. It was not going well for humanity's finest.
At this point there only seemed to be one thing to do - retreat for a tactical regroup - and it just so happens there is a scenario in the rulebook to do just that. 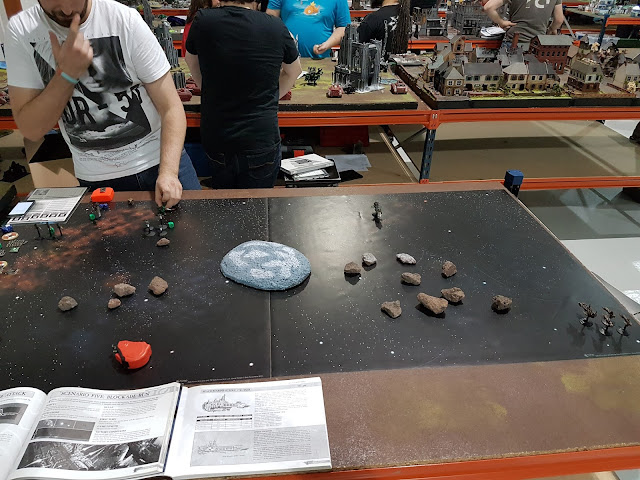 All my ships had to do was break through the blockade Dalin's fleet had set up - easy, I thought. (See my ships deployment). At this point in the campaign, the only ships I had left were my last surviving Strike Cruiser from the first game, the Battlebarge (which was too damaged to play in this scenario) and a squadron of Firestorms.
Knowing that if I lost this game the campaign would be over, I set up as far to the opposite side of the board from my opponent - the scenario had a random deployment generator for the blockading fleet which I used to full advantage - and decided to use the noble tactic of just flying as fast as I could in a straight line without stopping for anything. It didn't work out quite the way I planned (and I forgot to take anymore photos) as my small fleet were intercepted far quicker than I had envisioned.
Although the game was technically a victory to me, my escorts having got off the table, the strike cruiser proved to be too much of a juicy target for my opponent to ignore and she didn't make it off the board. A handful of games in and my chapter had lost 3 whole battle companies, 3 strike cruisers and only had a disgraceful retreat to show for it. At least it couldn't get any worse, could it?

Thanks for reading.
Posted by Mike C at 17:08 No comments:

I should probably begin this post with a confession; I can completely understand why even accomplished wargames painters are happy to ship their piles of unpainted Napoleonics off to a professional to paint, they seriously sap your painting motivation. Hence, why it has been almost 6 months since my last post on it, but that has been for 2 reasons: 1, It took a while to build up the motivation to do the next block of troops. 2, By that point I had forgotten my colour recipe. . .
Up steps the Warbasses Engineer's wagon and a Perry Miniatures figure for me to practice on. I bought the wagon and bits at Salute and had it built and sprayed within a few days, but that was as far as it got. The Perry figure was a recent purchase when I got the brain wave of how I was going to get my recipe without ruining a unit or wasting time getting it wrong. I could use it as a test miniature and make something useful out of it afterward, hopefully, helping to get a few more units across my desk in the new year? 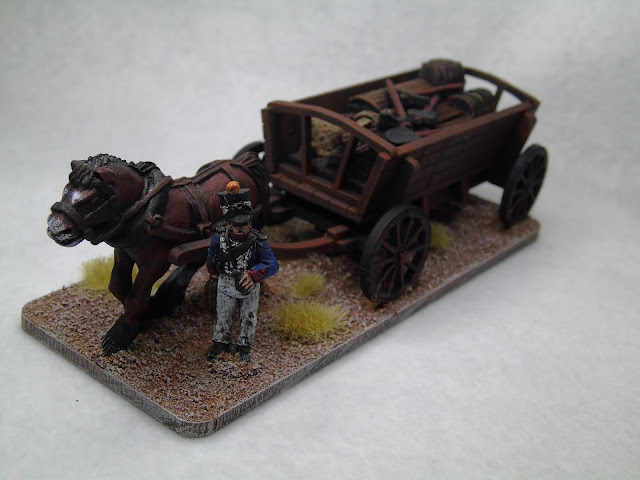 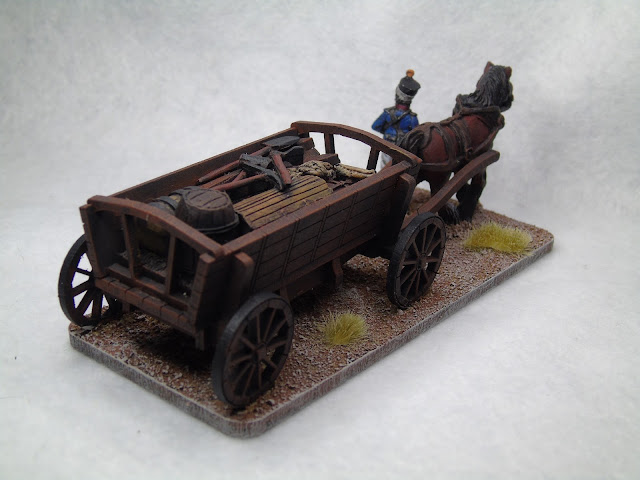 Comparing this model to my other units it is a pretty close, so I dutifully written my recipe down this time and am ready to get on with another unit in the new year. Oh wait, this means I need some Engineers now as well now . . .

At the end of this year's Zomtober festivities (?) I had a couple of half painted figures still on my desk that just hadn't quite made it to the finish line, but I was loath to put them away to do for next year*, so the only logical thing to do was to actually finish them. A month later and here we are**.


* Zombies and Survivors are
for life not just Zomtober.
** Yeah, a month - I can explain?. 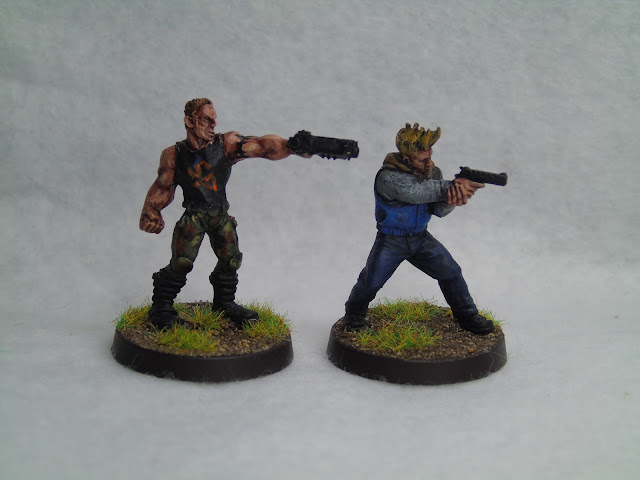 The hench guy from Heresy Miniatures sci-fi range, but if you ignore the gun style I think he works as a modern guy, while the blond figure is from Hasslefree Miniatures and takes a lot less explaining. In keeping with my theory on how a survivor gang should work I have kept automatic weapons to a minimum, with these two only having pistols and bravery to rely on. 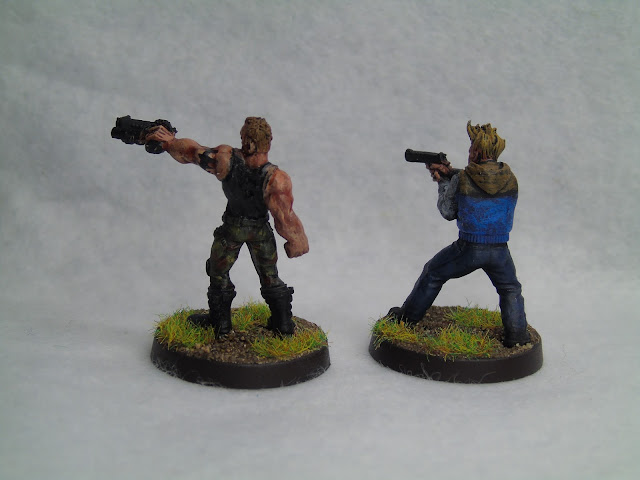