Before I even start my normal spiel about what I have been painting, or apologising for the photography or any of the normal stuff I tend to do at the beginning of the post, I want to go straight in with accusations. So here it is, I blame Michael Awdry for this post, it is entirely his fault. There I was, minding my own business and boom, yet another blog on dinosaurs, and there I was buying yet more toys online on a website I had never heard of before, but now have saved . . .. So when I got home I figured I had better get one of the dinosaurs sitting in my backlog of 'to do' projects moved into the 'done' projects pile. So here it is; my T-Rex, how can you do dinosaurs without a T-Rex?﻿ 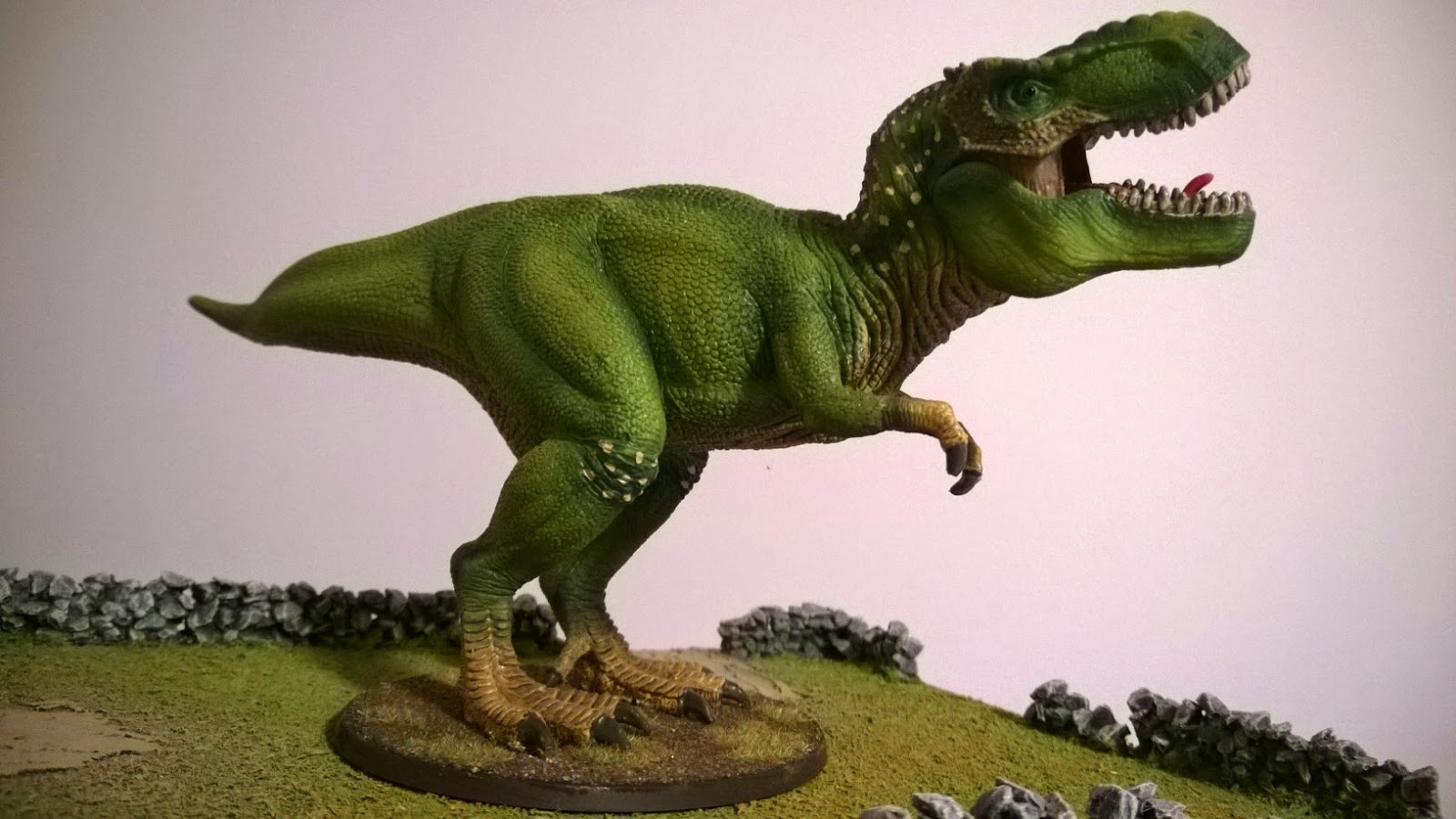 He hasn't been painted or touched up at all, just stuck to a base and based like everything else. Much as I wouldn't have picked this colour scheme if he was being painted from scratch (he'd probably be a reddish brown colour), I quite like it.﻿ 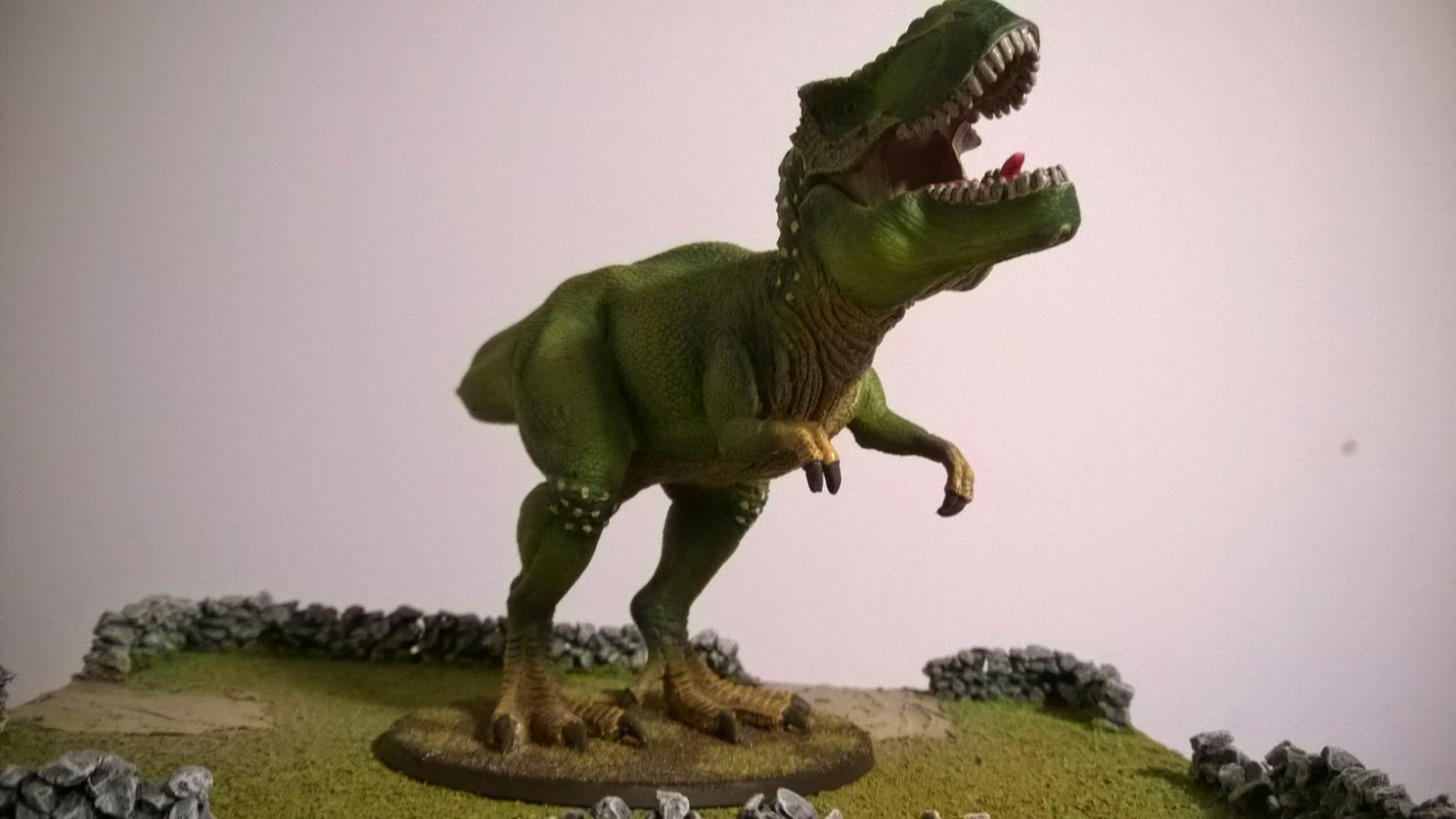 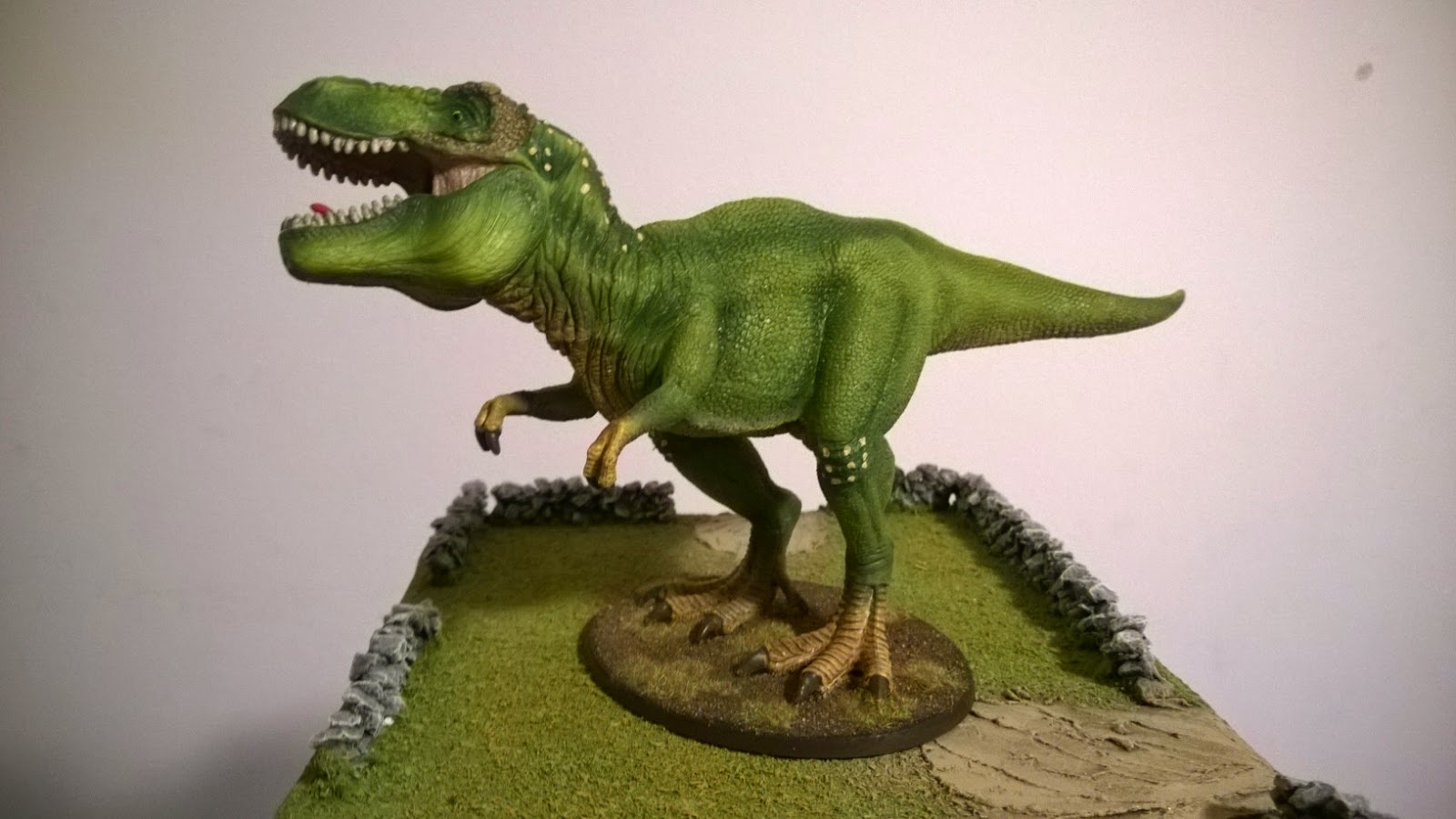 Email ThisBlogThis!Share to TwitterShare to FacebookShare to Pinterest
Labels: Dinosaurs

More on the scenery front

On a wargaming front, I had two major plans for this year;

1, Get as many games in as possible. I had been too long without getting my gaming fix in and I wanted this year to be the year I really scratched that itch, so I could just settle down and play games when ever I was able afterwards.
2, Sort out my dire scenery collection. My collection comprised of a few random bits and pieces that didn't really come together to form a full table of anything.

The first one has been going pretty well so far, I smashed my aim of 52 games back in August I think, but the second aim was being slightly more elusive. I had a vague plan that the scenery guy that I bought the walled field I use to take photos on would be the main supplier of my new scenery collection, but as I managed to miss all three shows that I normally see him at this year, and I gather he doesn't have a website, that plan hasn't worked out. So, plan B; pick up scenery from other sources on my travels, which is something I would have done anyway to supplement.

On Saturday I was at the NEC in Birmingham for the National Railway Show with my dad and on my wander round I found a few different guys selling their own stunning looking trees (if you see their willow trees you will understand just how nice this things can be) and I had an idea. To supplement the weird mix of trees that I am slowly buying (First set of trees & Second lot of trees) I decided to buy myself one of their silver birches, as, for a small outlay, this tree should really stand out in a dense forest, and set of their flexi hedges. 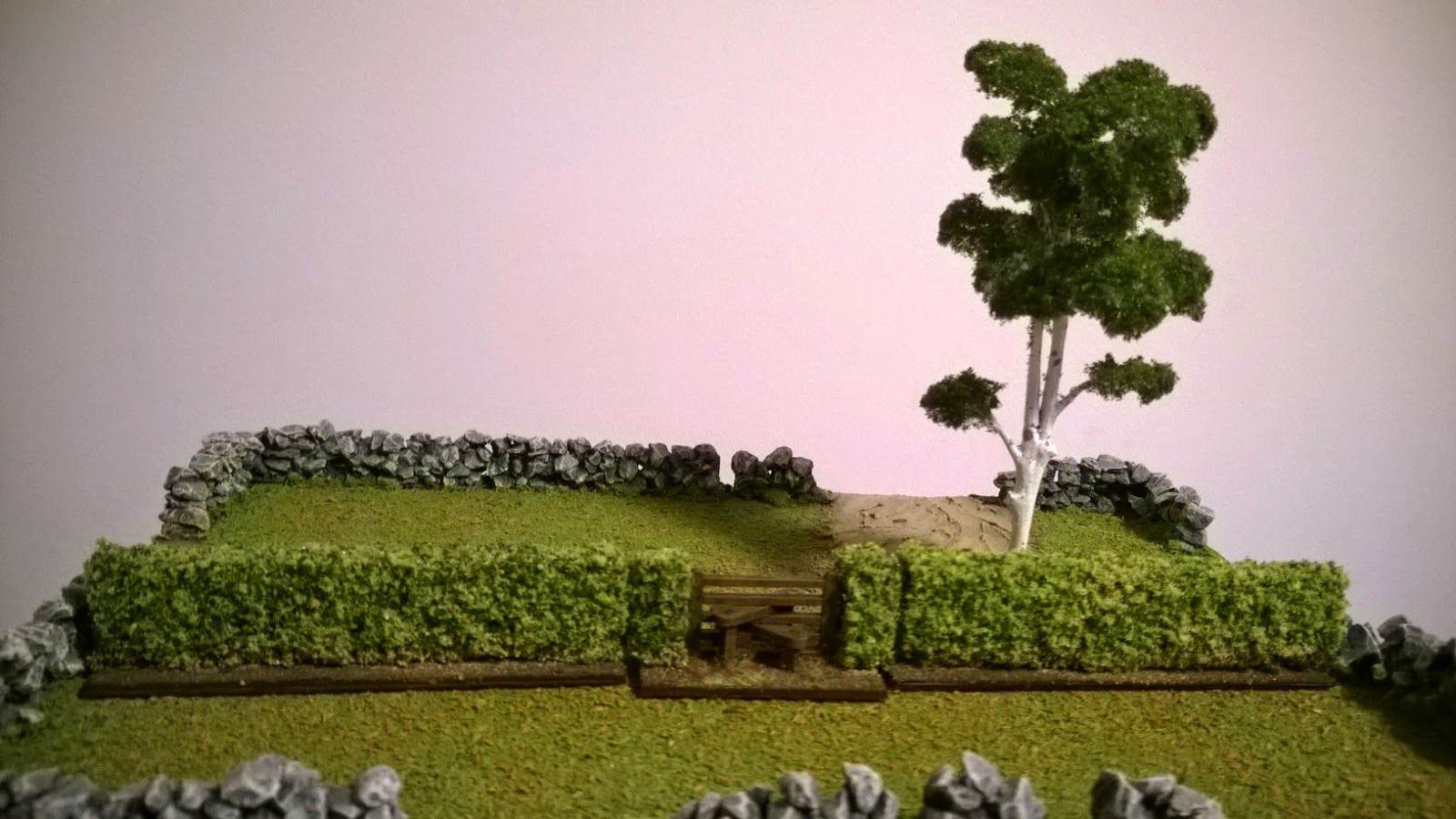 So my collection now has about 3 and a half foot of hedges and another tree in it, and all I have had to do is base them up in the usual way and I added a set of stiles from the warbases' range to add a bit of interest. 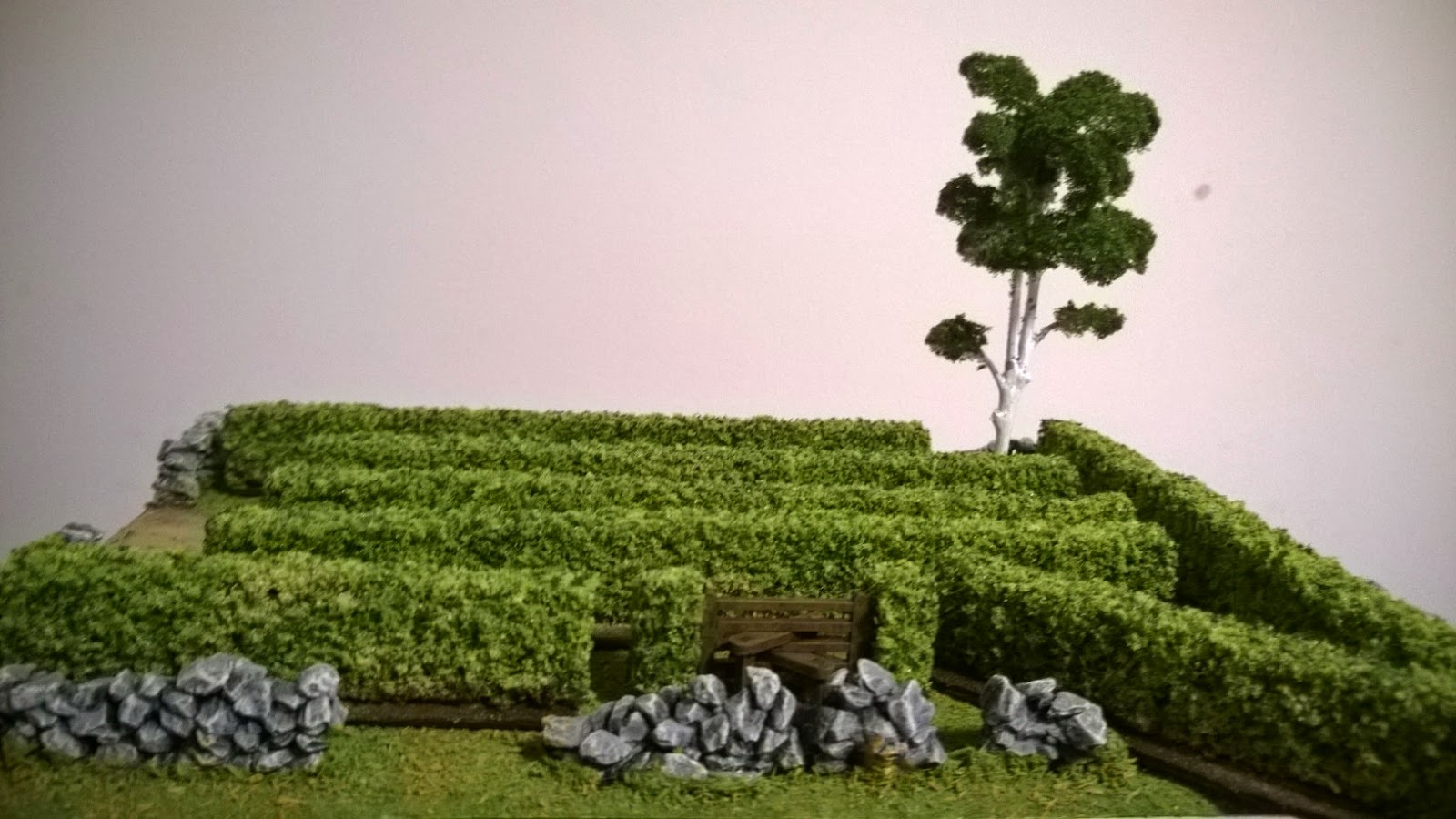 Next time I see this particular tree making company I will have to pick up another couple of silver birches, a willow and another few foot of hedges, as these things seem to do the job quite nicely. I need to organise some time to get a photo of my whole forest now really.

I am going to shock a lot of people with the revelation that I may have got distracted again, but there is a unit sitting on my painting desk, very nearly finished, and through no fault of it's own, another project has come along and overtaken it.
The bolt action tank war event I went to last weekend has really given me the tank painting bug, and something had to be done to sate it, and this is my attempt; a warlord games SDNFZ 222 armoured car. Much as I do want, and probably will still get in the near future, more German tanks, I needed something a bit more useful for a small game and going through the models the shop had to offer, I felt that this was much more useful as infantry support than another stonking great tank. 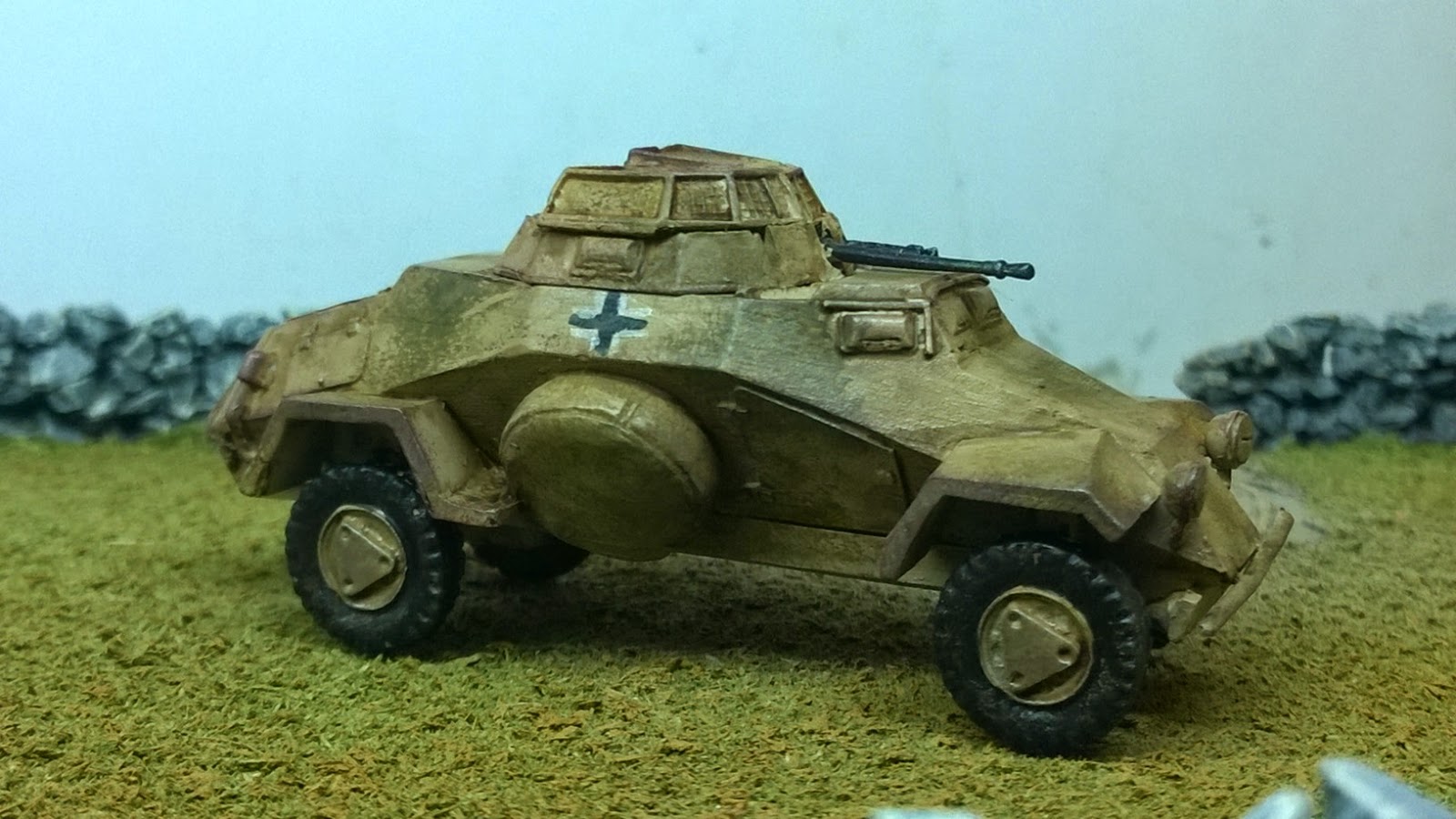 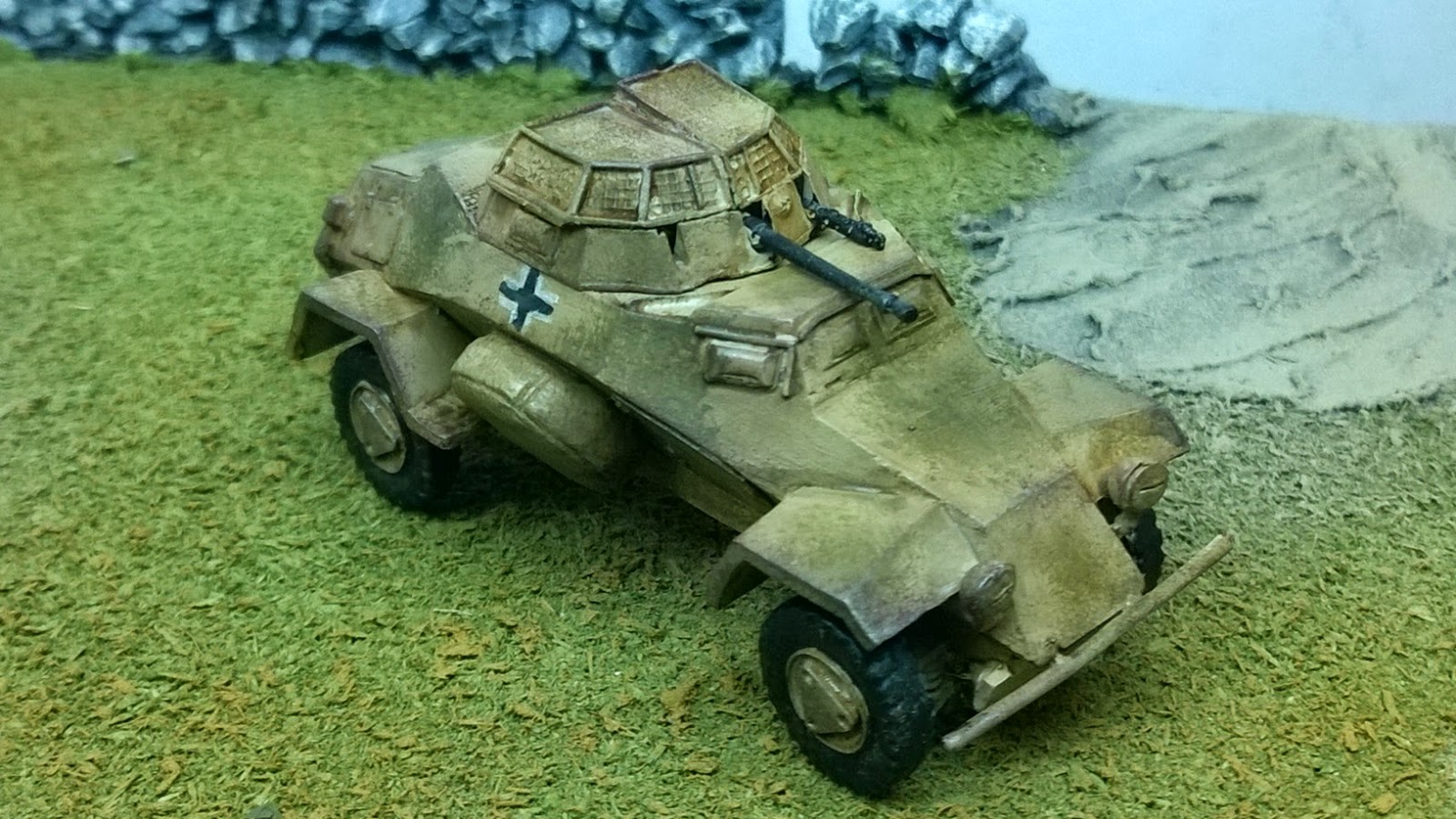 As ever, I don't think my photos do it justice but it will make a nice addition to my German WW2 army.

Also, I have updated my post about the tank war event day to include the video Templarcrusade01 made, and can be found right down the bottom of the page here.

Today was Tank Wars at Wayland games, a sort of promo tournament / intro gaming day for Bolt Action and their new supplement Tank Wars. The ticket price included a blind choice of tank kit, from the list of; Panther, T-34 and Sherman, a morning of building the kit then being taught how to paint them, including washes and weathering powders, and then lastly having a big game overseen by Alessio Cavatore, currently one of Warlord games' rules writers but formerly of GW fame.

I picked the German Panther, which fits perfectly into my fledgling German bolt action army that I started a good year or so ago. Much as building a kit with no instructions and only a vague idea of how the model is supposed to look is really frustrating, it was still a laugh having 20 odd of you all in the same boat and copying each other. The painting stage was where the day really started to come alive, being shown painting techniques by Brian from templarcrusade01, who was both a great guy and an amazing teacher. Being shown different ways of using the humble wash and chipping techniques was a really inspiring, but it was the weathering powders that really opened my eyes to the new possibilities.

The next picture shows my tank finished other than a last minute German cross I added to each side of the turret. I really do think this could be the best painted model I have ever done, and to have taken it from bare plastic to finished and gaming in the space of 2 hours is just stunning. It's just a pity that the photography doesn't do it quite the justice it deserves. 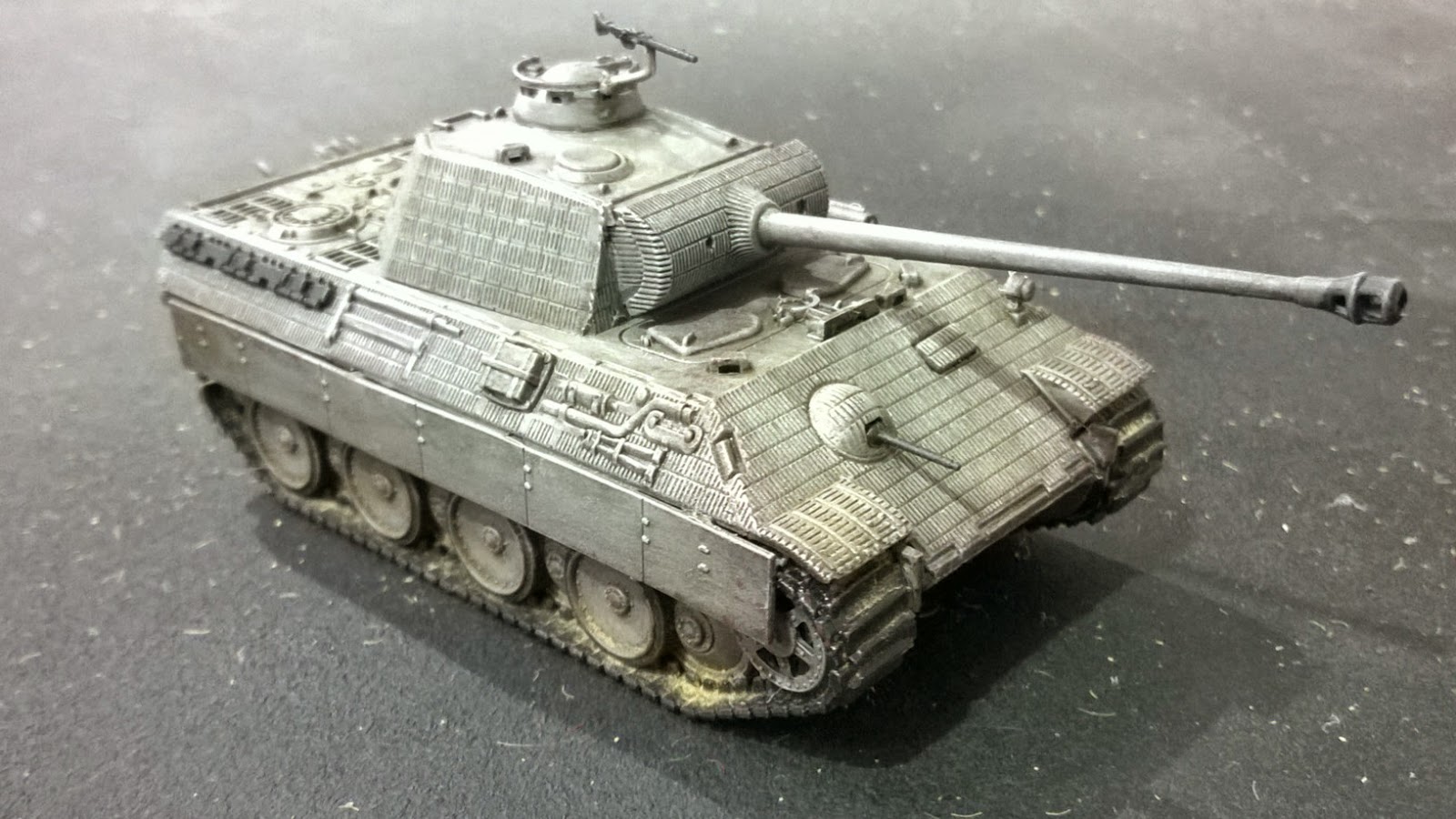 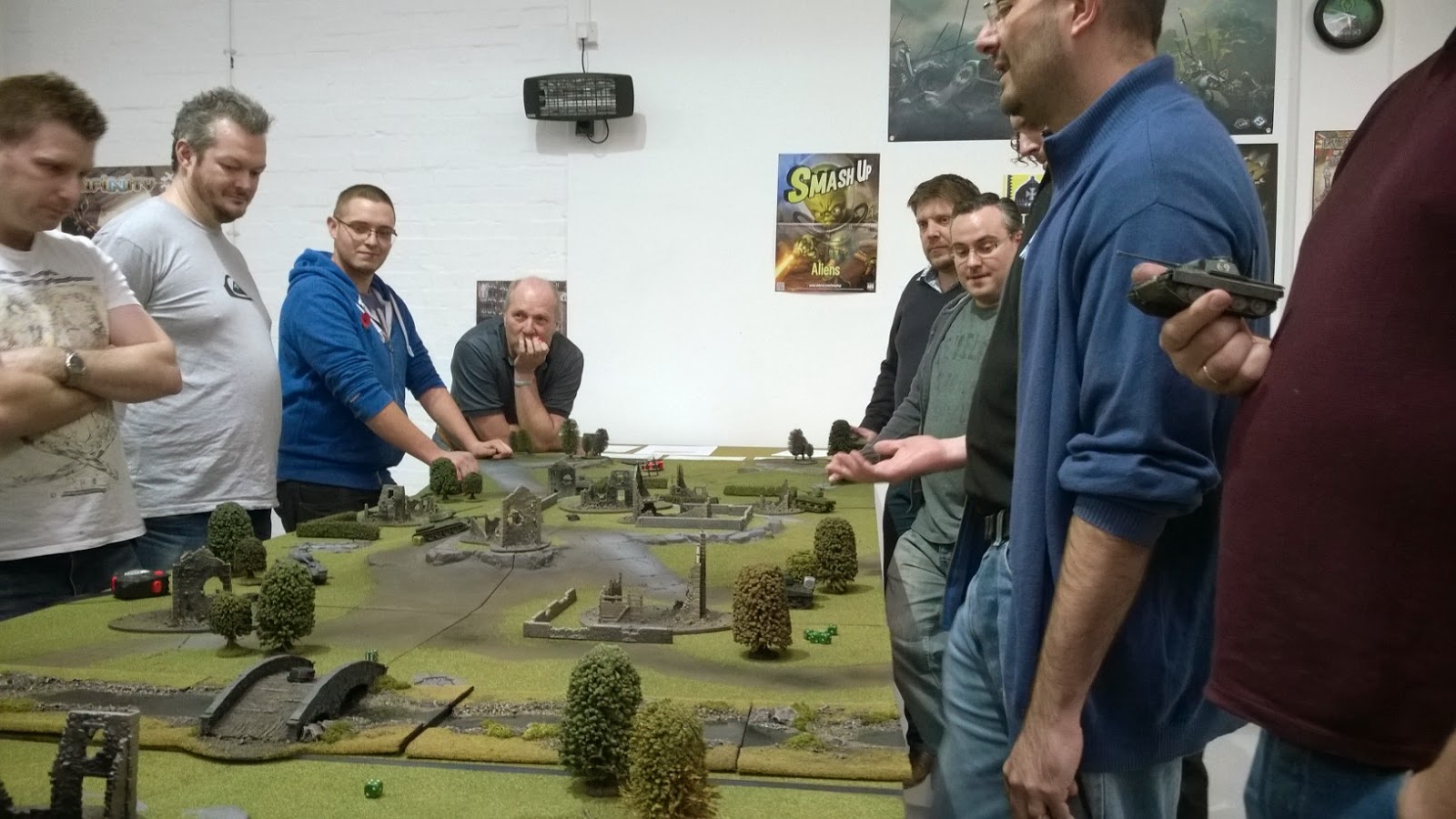 The first game was a mixed sides fight, where the organisers tried to split each of the 3 tanks evenly between the two sides. They picked a Panther commander from each side to be the force captains, and Ross was picked for his side, while I got the other, although I very quickly gave Alessio second in command.

The games themselves were probably two of the best games I have ever played. The atmosphere was amazing, the games just flowed and it worked without any of the normal nit-picking war games can devolve into.  Even though my side lost in the first game, it was still a seriously good game, while the second one was possibly even more fun.

The just to top off a great day, I won the award for 'most objectives captured', which will go up on the wall of my man-cave, somewhere near my new tank I think. Oh, and I got my copy of the Bolt Action rulebook signed by Alessio . . . 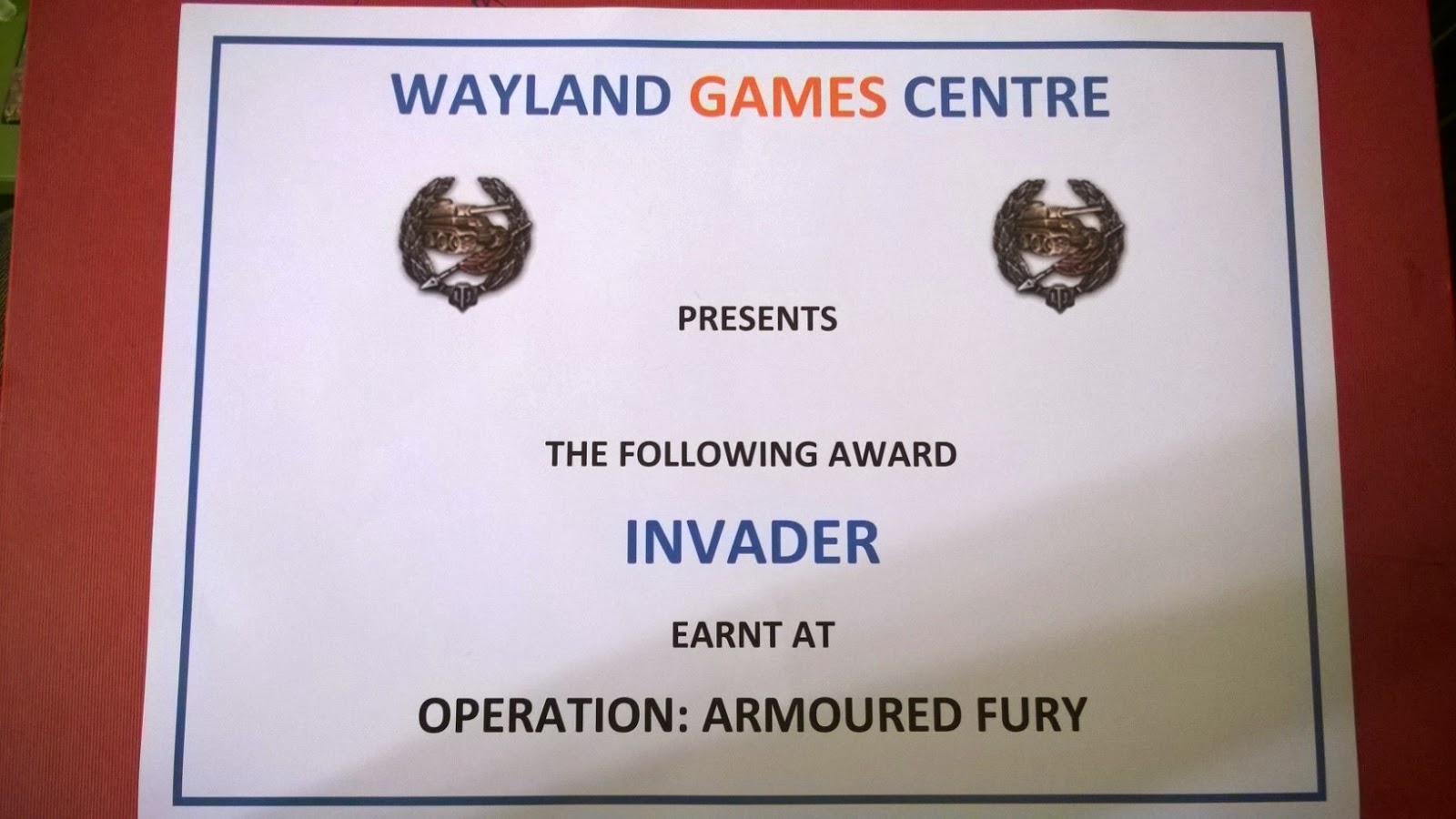 Templarcrusade01 was making another video blog while he was at the event and did a few interviews and during game reviews. Here is the Tank Wars video for you to watch. I have to say, seeing myself on camera is a weird experience. (Look for the guy with blonde hair and a grey t-shirt).

Until next time, thanks for reading.
Posted by Mike C at 20:39 8 comments:

It's been a slow couple of weeks in terms of getting any hobby done, and it looks like it is going to continue for a while yet, but I have managed to get another dinosaur painted up in my spare time. It's been a while since I've posted a new dinosaur on here.
This model is of an Euoplocephalus, a heavily armed herbivorous dinosaur. I stumbled upon this in the cheap toy section in Wilko's and figured, with a repaint, it would be a really good addition to my dinosaur collection. 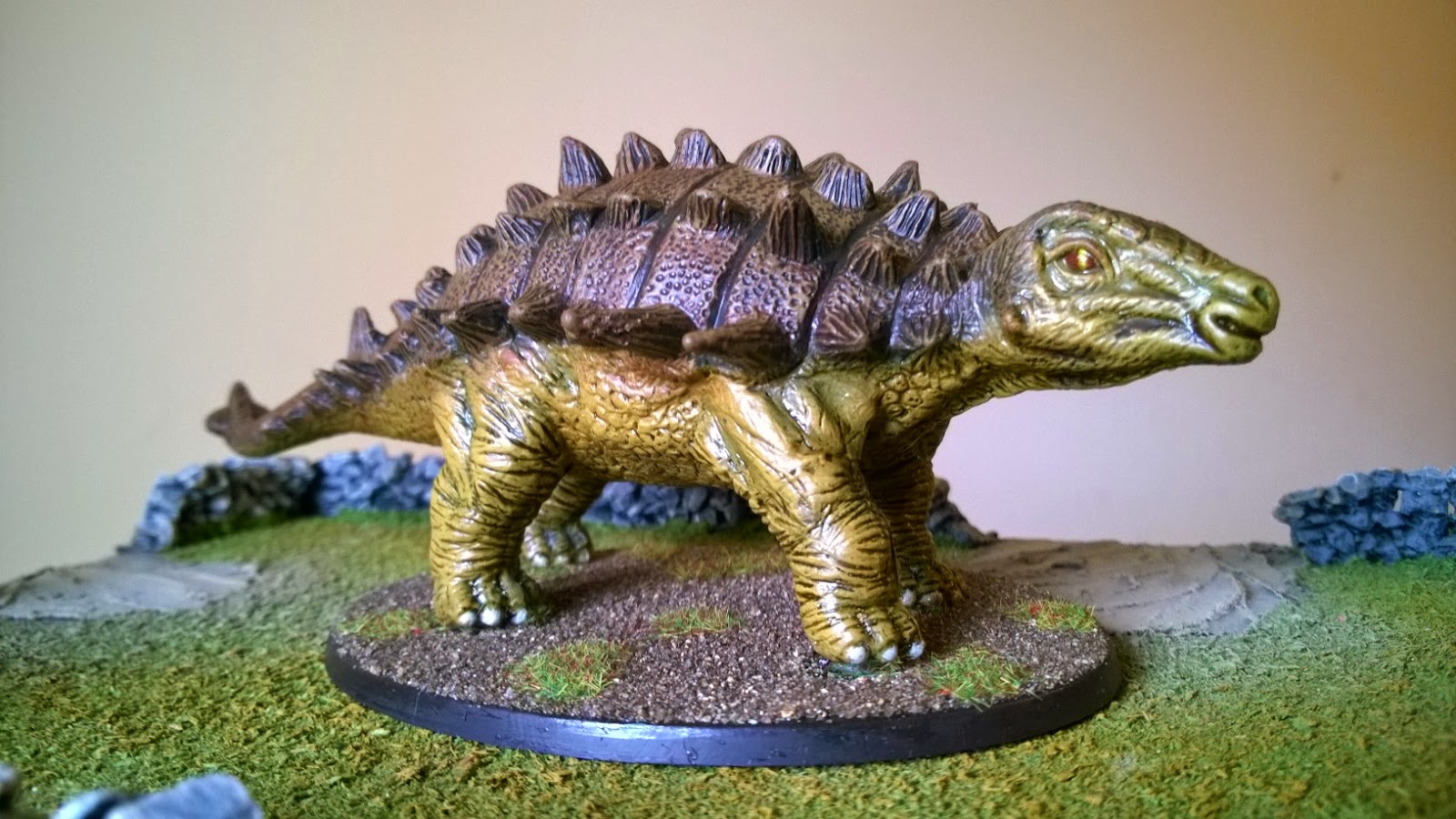 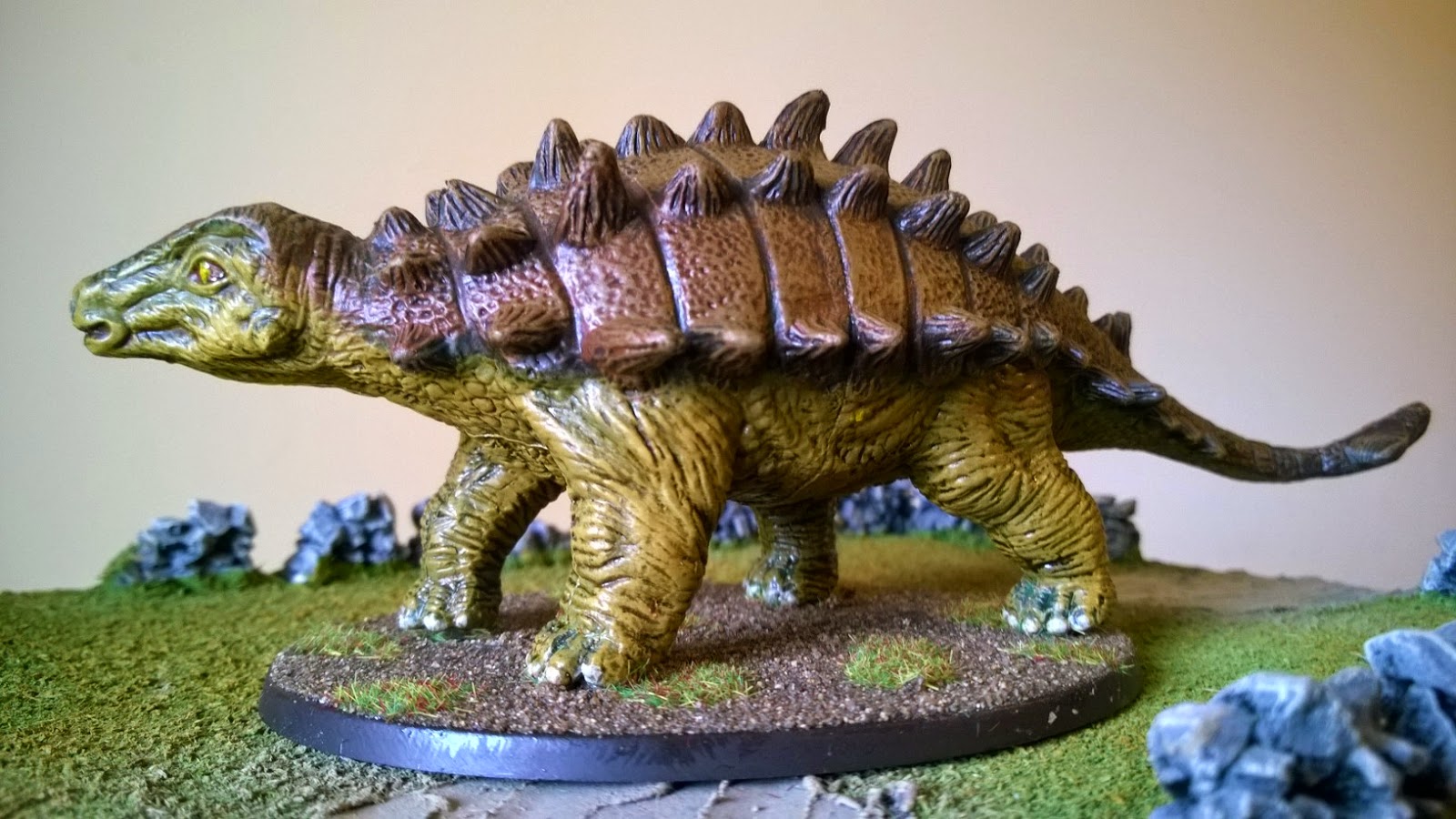