Feeling like I have had a big enough detour for a bit I have been tidying up the next few half finished Greek units and it snowballed a bit quicker than I had planned, with 3 units at the same time. Not a huge amount to add about these guys other than its another unit of slingers, unarmoured hoplites and armoured hoplites from Victrix and I am going through a bit of a light blue phase. 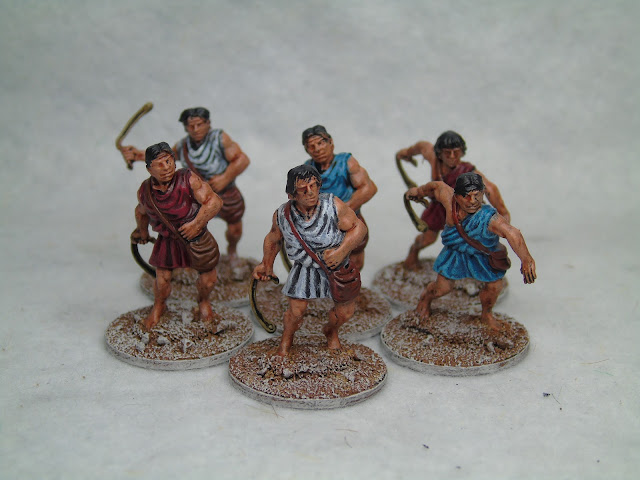 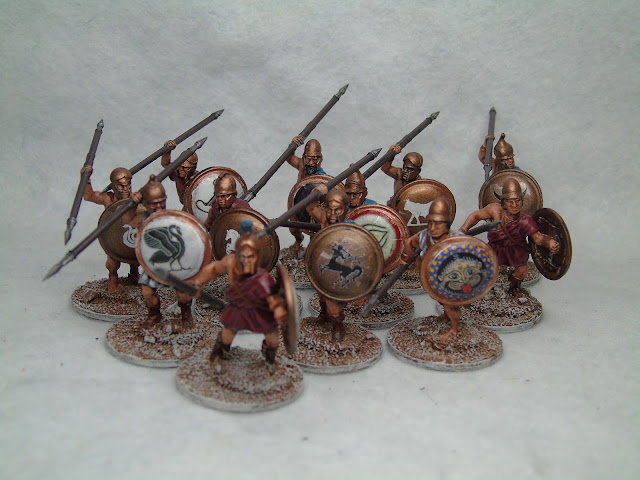 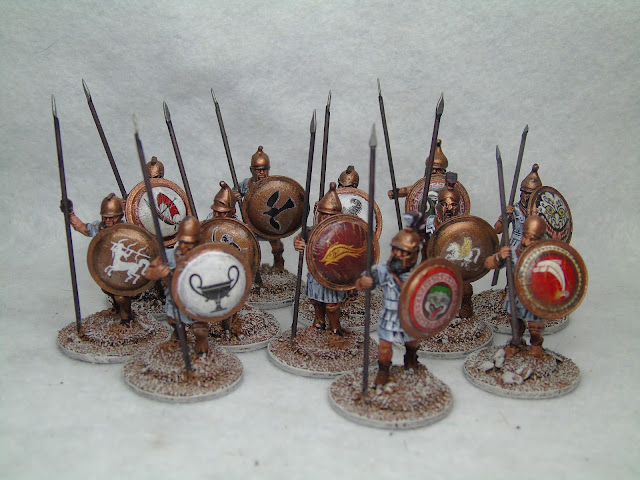 Following on from Greek skeleton warriors are another unit for Of Gods and Mortals, Satyrs. The models are from Foundry Miniatures and part of a (slightly) bigger order that included a pack of Gods to actually try the rules out with. Looking through the rules I needed a few legendary units, so this was one of the choices I made, although I suspect I'll be picking more up in the future.
I tried to make the skin tone look different from the Greek mortals I have been painting to emphasis the differeness, beyond the obivious horns and goat legs. 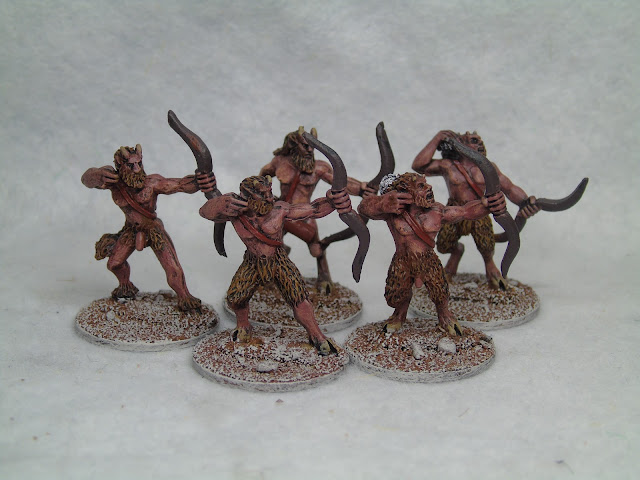 I should be getting on with more of my hoplites as I still have a fair few to go, however, when the box of Wargames Atlantic Greek skeletons turned up, I just had to get at least one unit built and painted.
First up, I have mixed feelings on this kit. I'm not 100% sure what the makers of the kit wanted it to be, it promises a lot of choices but doesn't really give enough of any to really keep anyone happy, in my opinion. For example, you only get a single round shield per 4 skeletons, which when most hobbyists are going to want to build the scene from Jason and the Argonauts, its not enough. The same applies to the late pike, although wanting to build a full box of late skeletons is going to be a much more niche plan.
I have started using metal washers for bases as I now use magnetic sheet to store my figures and I found the skeleton that has separate legs just doesn't work with my setup as it is just too fragile. Again, I get what they were going for my including it, but it's a figure on every sprue that I am putting straight into my scenery bits box.

Saying all of that, it's a kit I would be surprised if I didn't buy at least one more box* of (maybe more**) and it was a complete joy to build and paint. They will get used in a Hades themed Of Gods and Mortals force and I have a vague plan of an Undead Greek Lion Rampant force. . . 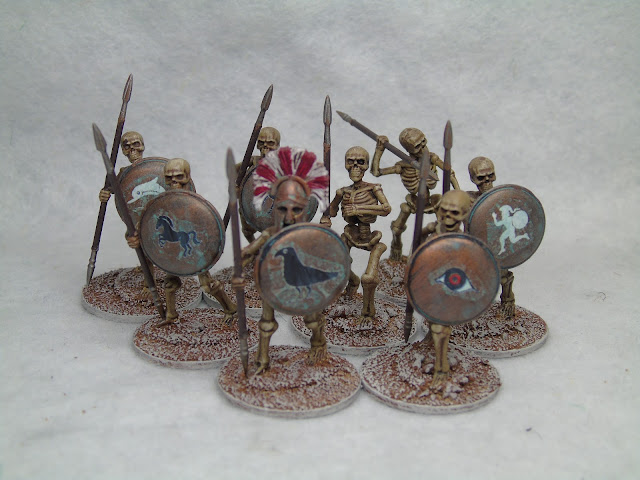 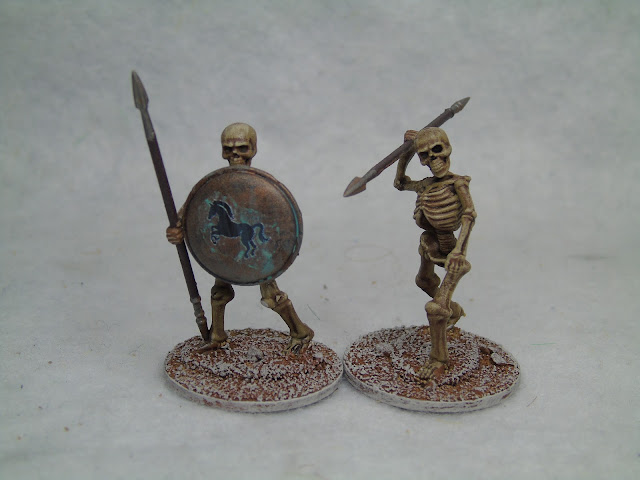 I'm at that mid point in my Ancient Greek project where it is hard to make these posts anything more than 'here is another unit just like the one you have already seen', but I have some other stuff in the works to mix it up a bit and I should be able to get some game photos in pretty soon.
In the meantime, here is another unit of armoured Athenian hoplites, this one led by a man with a rabbit on his shield*.


*Rabbits and owls will be the theme for leaders 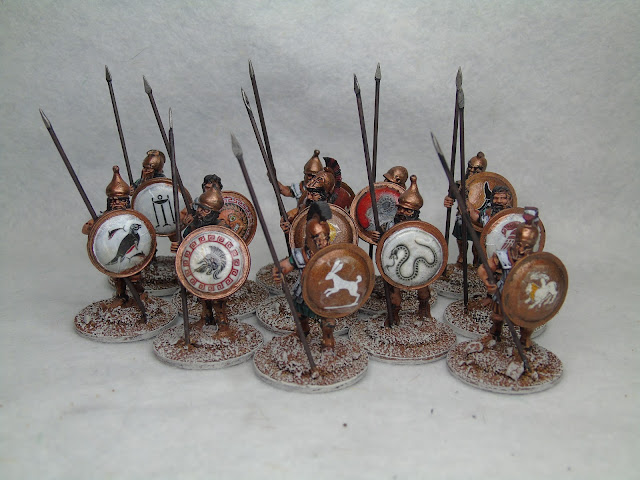 Much later than planned, even though the models have been finished for almost a week, and I've got another unit that just needs the last few bits finishing off, but here is the next batch of completed figures for my Greek project, another unit of unarmoured hoplites and the first unit of psiloi (slingers). I'm pushing hard to get to the point I can get some Greeks on the table for a game, and I am pretty close now. 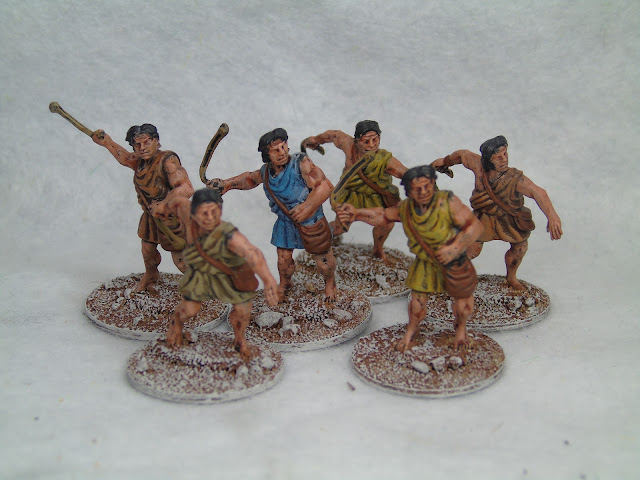 The hoplites include a musician from the Mortal Gods range for a bit of variety. I decided to order some more wire spears when I started this project, so I there would be no risk of running out in the middle of anything (even though I now have enough to not run out for a good few years) and when the choice came down to ordering from North Star or Footsore, I went with the company that I could add a few miniatures to the parcel, and some of the single figures from the Mortal Gods range are particuarly nice*. 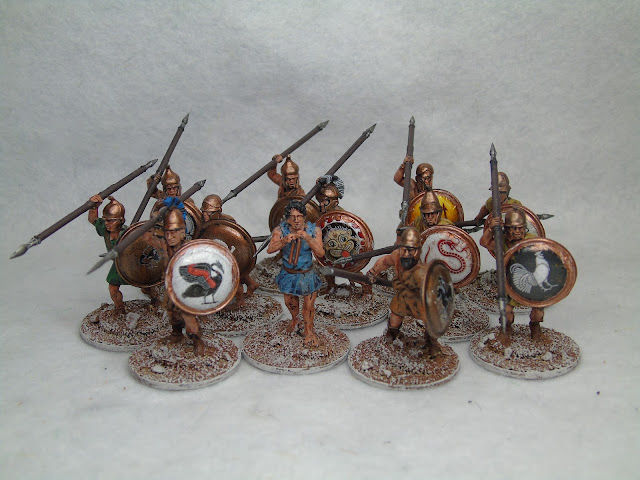 More Troops for the City State

As I mentioned last post, I am painting my batches in two groups, armoured and unarmoured (everything else). This post is going to be about the first unit of unarmoured Hoplites.

First up, I am nowehere near as keen on this kit as the armoured hoplites. As the unarmoured models have integral hands attached to the spears, but joined on by a tiny wrist joint, I can't replace the spears, and they are really easy to break*. Also, there is such a difference in poses that I'm not really sure you could use these guys to fill out the back of an armoured unit (as I had planned) without it looking strange. All that being said, they are fairly quick to paint and the spare heads have come in useful to replace the unhelmeted head from the armoured box**.

*I've actually painted slightly more than this unit and I've already had to repair 4 wrist joints.
**Heavily armoured hoplites without helmets on looks daft in bulk.

The other thing I thought I had better mention at this point is my unit numbers. After speaking to my mate, Neil, we decided we would ignore Men of Bronze's 10 man unit idea (no big deal as units fight as abstract elements anyway) and use the Lion Rampant unit sizes of 12 or 6 for units. This allows us to use the same units for the Greek version of Lion Rampant and Men of Bronze without fiddling around with models or movement trays*** and those 2 extra men seem to make a big difference to how the unit looks. 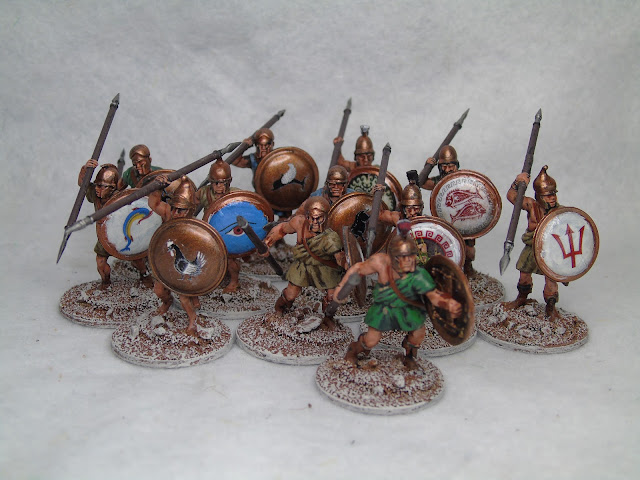 Went and caught the Ancient Greek


Unless you have been hiding under a rock in the last couple of months, there has been a renewed interest for Ancient Greek wargaming at the sec, with last month seeing the release of two rulesets in the form of Men of Bronze and Mortal Gods. As I have already said I want to be a lot stricter on the new skirmish games I get into – preferring rulesets that are just a book and your own figures, than sets that rely on buying specific models, unit cards and tokens – I was purposely ignoring Mortal Gods, but Men of Bronze (sharing similarities to my beloved Rampant system) set ideas off in my head. Then I found out that my wife had booked a long weekend for us in Athens and a plan started to come together for an Athenian army. . . 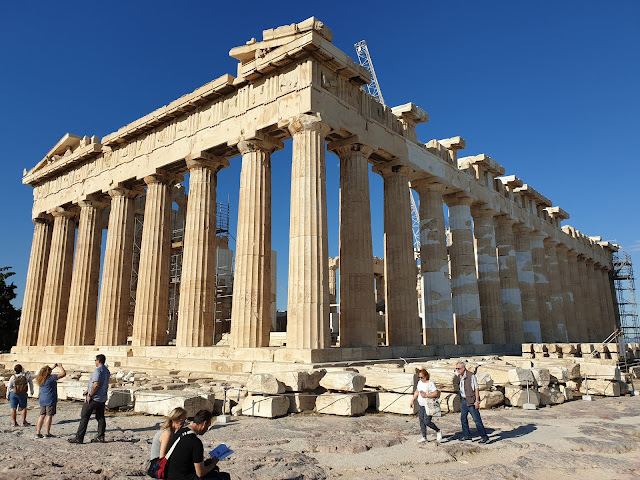 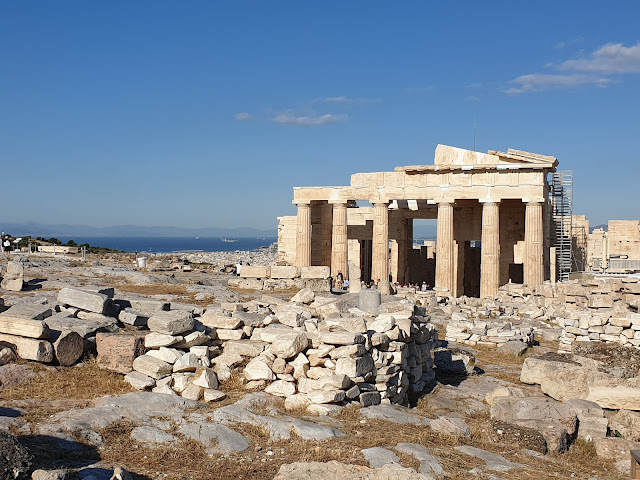 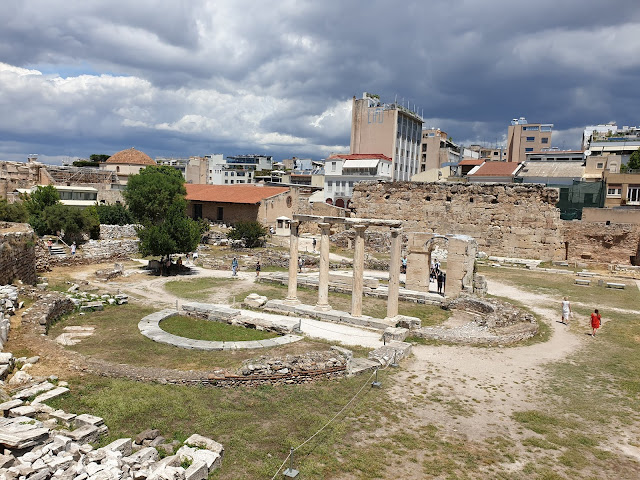 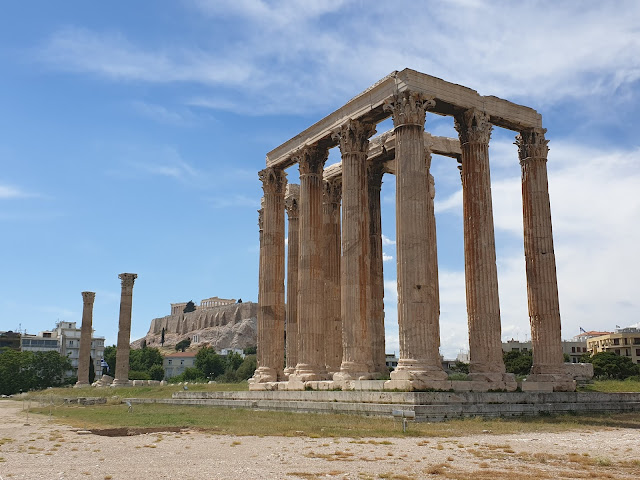 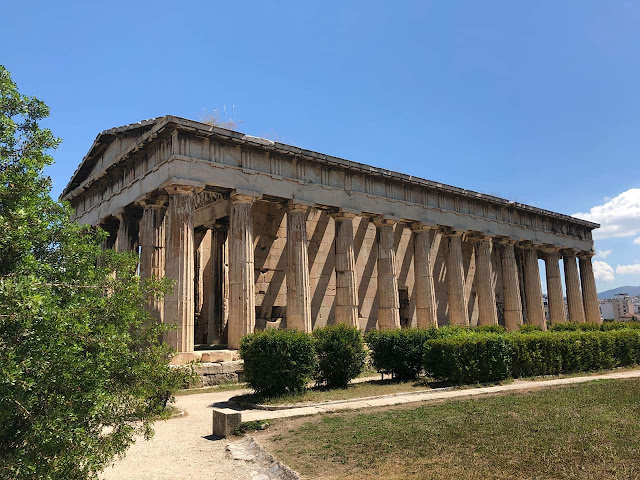 I can safely say that I have bought more Victrix* models than I’ll need for a single game**, but I firmly believe under buying is much worse than over buying. I had initially planned to paint this army in the same way as my other non-uniformed historical collections in a batches of cross unit models, but when my unarmoured units arrived, I realised how little they shared with the armoured models, so I am going to paint batches of armoured or mixed unarmoured instead.
The armoured box of Athenians turned up first, so this was what I started with. They are built as they come out of the pack, except I have swapped their plastic spears for wire spears, simply because I broke one of the spears before I even finished spraying them (oaf) and I really like wire spears. Shield designs are a mix of Little Big Man Studios and Warlord games to give variety.
*and other
**Although, I plan to use the figures for multiple systems 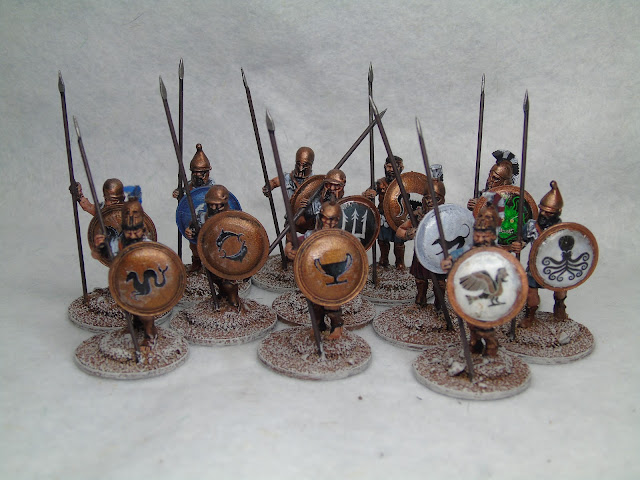 My next unit is almost finished too, so I should be posting again fairly soon.