The last battlefield post in this sequence, this time it's the battle of Stoke Field, the last battle of the Wars of the Roses, with Henry VII defeating the Yorkist pretender, Lambert Simnel, and securing the crown for the Tudor dynasty.

This battlefield has been partly built on in subsequent years, so is nowhere as impressive as some of the other sites we visited, but is well worth a stop in if you are passing through. Here are the pictures: 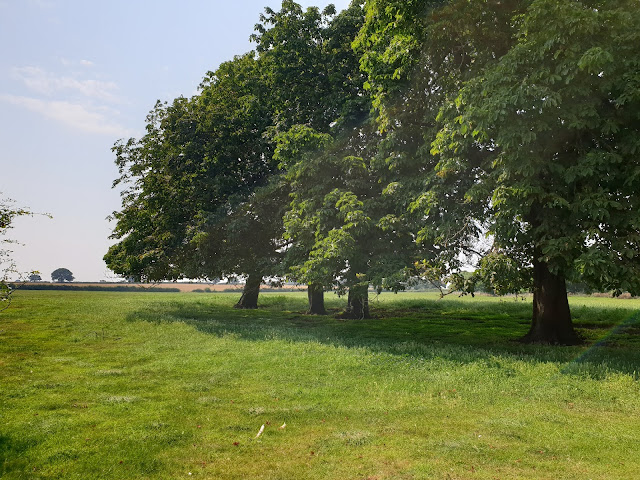 The (limited) view of the battlefield - I think there was a better view from the other side, but it was just too hot by that point. 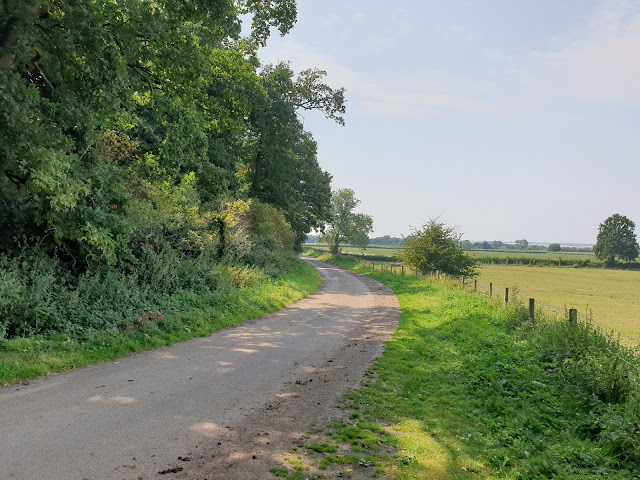 The Red Gutter, the site of the Yorkist rout
I've got plans for a post on Hadrian's Wall, Vindolanda and the Roman Army museum planned next me painting done.
Thanks for reading

Email ThisBlogThis!Share to TwitterShare to FacebookShare to Pinterest
Labels: Battlefield, War Of The Roses

The battle of Towton was one of two battlefields that we had no plans to visit at all, until we saw they were on the way to the next place we were going anyway. Towton, fought in the War of the Roses, has the reputation for being the bloodiest battle on British soil and it was the first battlefield I've been to in the UK that wasn't just a field but was a trail of events and places. The sheer size of the battlefield is basically the overwhelming feature of it, something I've only seen at Waterloo before.

So, again, trying to avoid being a bad version of Wikipedia, here are my photos;

Looking towards the Lancastrian deployment lines from the Yorkist lines

The field the action moved to 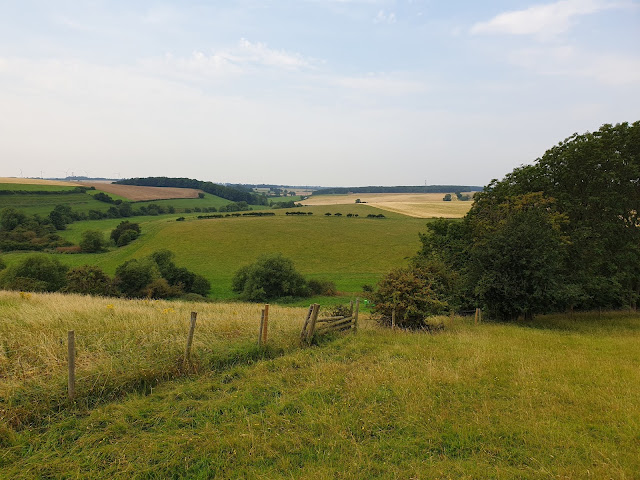 The climax of the battle before the Lancastrian rout and subsequent massacre
I came away from this battlefield brewing with ideas. I have a few boxes of Perry WotR infantry in my shopping list as I think a box will do the bulk of a single side for Lion Rampant, but I'm going to hold off buying until I have a few more projects moving on. Going out is dangerous.
Thanks for reading

Email ThisBlogThis!Share to TwitterShare to FacebookShare to Pinterest
Labels: Battlefield, War Of The Roses

Carrying on with the theme, the next battlefield we visited was Marston Moor. A lot of the battlefields on my list that I want to visit end up being a slightly blurred medieval but can't remember why the battle was fought in my head, but Marston Moor is a name where you know exactly what was going on. A big English Civil War battle with all the big names present.

Again, I'm not going to try and compete with Wikipedia so here are some photos; 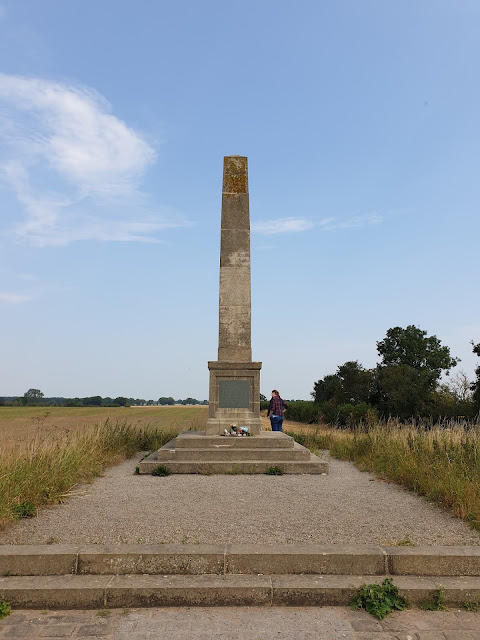 Looking towards the Royalist Lines

Looking towards the Parliamentary lines

Most battlefield visits leave me at least planning how I would refight the battle on the tabletop, for example after visiting Naseby I bought Pikeman's Lament and ordered my first box of ECW troops. After this battlefield I ended up ordering some Warlord Games Scots Covenanters which will feature in a later post - hopefully.

I've not been doing a lot of painting recently but I have had my summer holiday and we did some brilliant things while away that I think are blog worthy, so I'm going to do a short series on where I went while I try to do some painting in this heat.

First up is the Battlefield at Flodden. Like my battle of Naseby post, I'm not going to go into the history as Wikipedia will do a much better job, but suffice to say it was James IV vs an English army left behind while Henry VIII was off in France. Here are some photos; 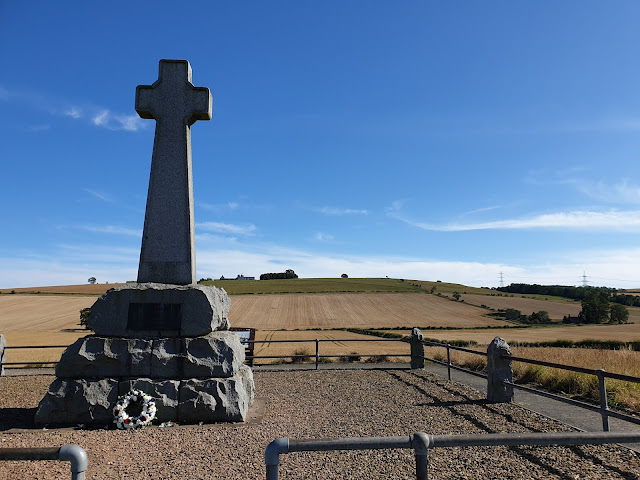 The battlefield from the English battle line

Email ThisBlogThis!Share to TwitterShare to FacebookShare to Pinterest
Labels: Battlefield

I've still not managed to get a game of 9th edition 40k in yet, as my gaming didn't quite take off after lockdown ended in quiet the way I hoped it would, but I'm still quite hyped about my Primaris. These two squads are the last of the bits I've had sitting around waiting to be built, another squad of Intercessors and a squad of Aggressors. 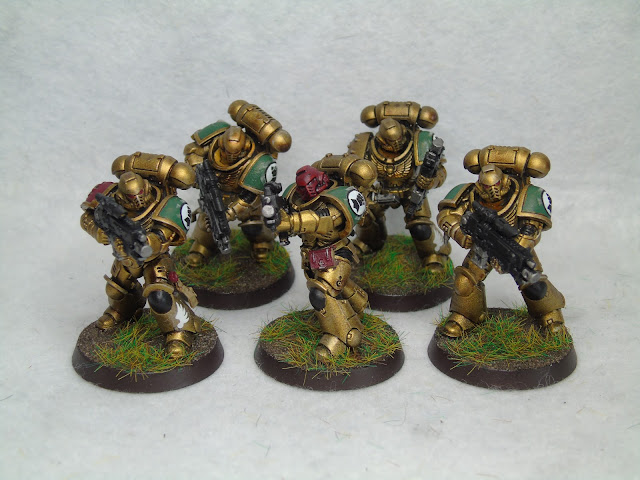 I've given the Intercessors stalker bolt rifles which are the heavier stand and fire version of the bolt rifle, hoping these guys will camp on objectives. 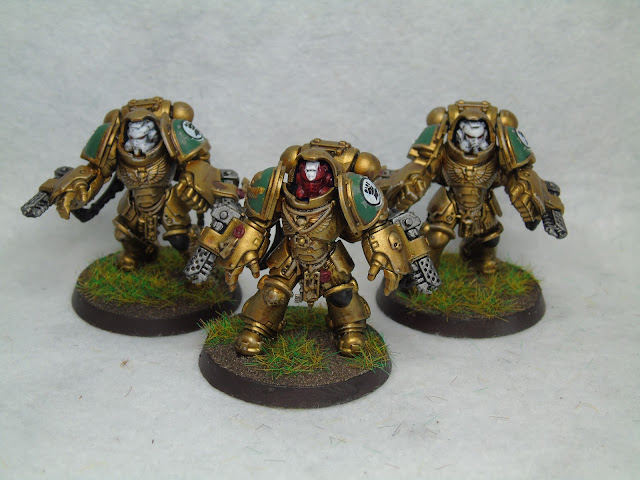 I made my aggessors veteran as it seemed to suit their fluff being an elite unit thrown into the worst fighting, whether or not a make them vets in the rules will be a different matter.
I've got ideas on where I want to take the 4th next, but I really need to get a game in before I go nuts. Plus I have other ideas for the chapter too which will probably come first.
Thanks for reading
Posted by Mike C at 15:56 4 comments:

The Dutch Navy At War

After about a month of little to no hobby I finally managed to finish a project* and get a game in using them, in this case, my 1:1200 Dutch fleet. Like I said in my last posts, tis fleet has been on the backburner for so long that it had stopped being funny, so getting started was a brilliant feeling. I got to the point that I was really enjoying knowing I had an afternoon rigging a ship, which is something I didn't think was possible. So the last ships I needed to finish were:
*for the moment 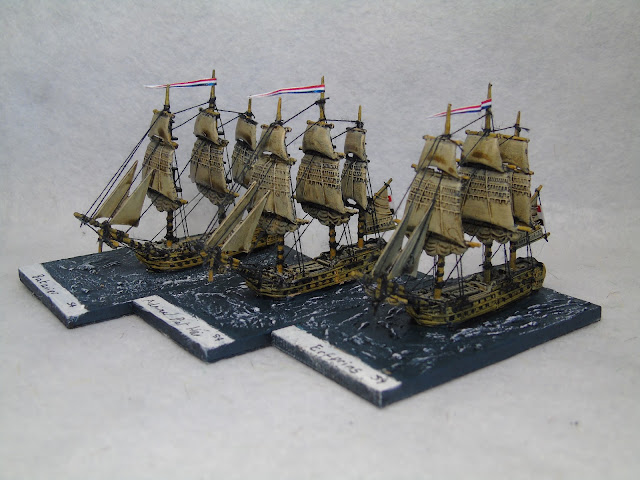 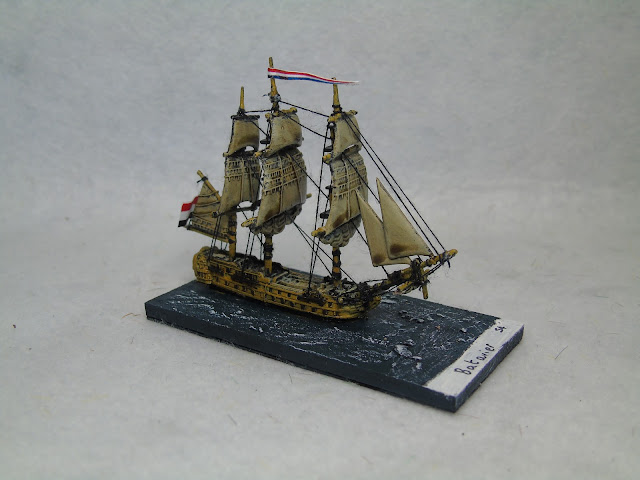 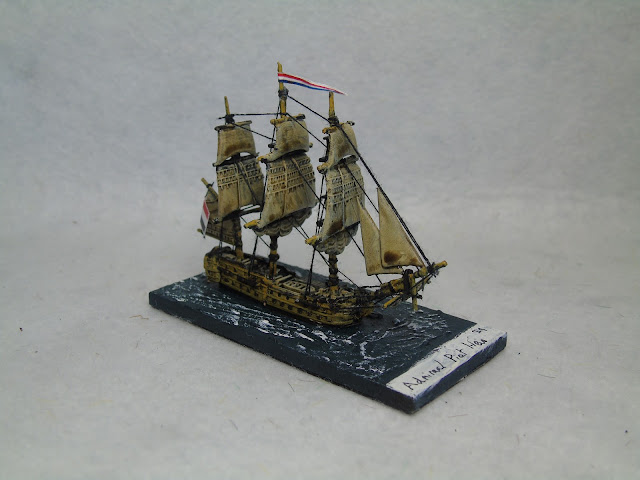 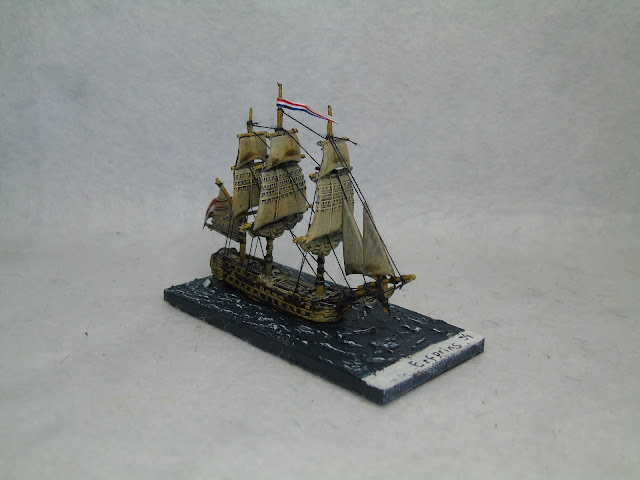 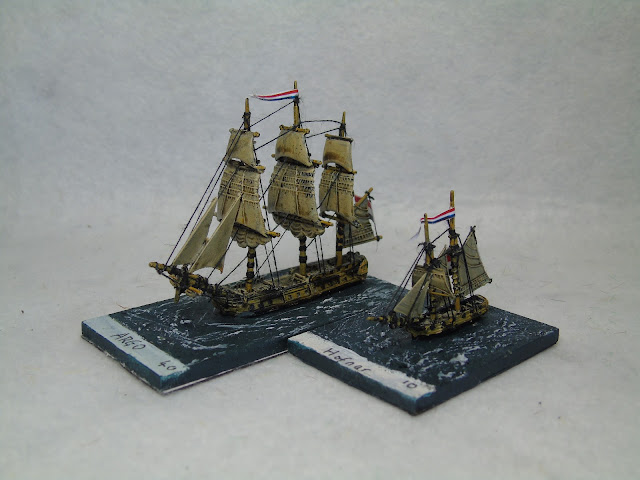 The last pair of ships. 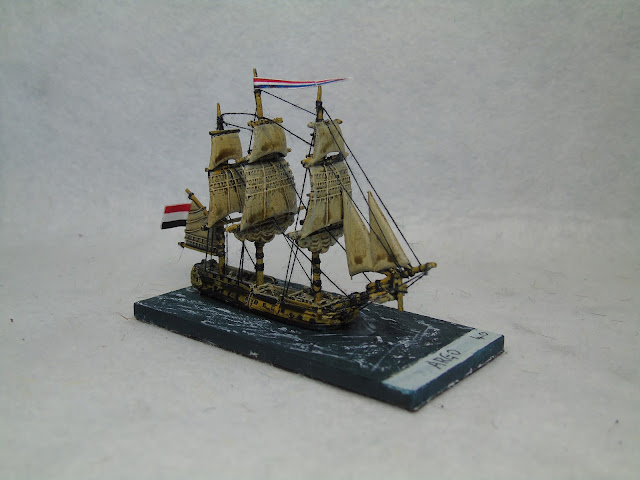 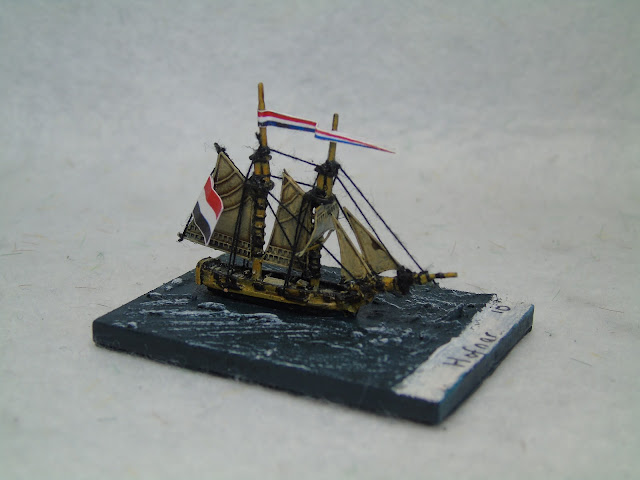 Hofnor is the only non-historical name in this fleet - named after a schooner (Jestor) in the Alan Lawrie stories I'm reading at the sec.
Then last week, I headed round my mate Neil's house one evening to give my fleet a baptism in fire. My fleet was slightly bigger than Neil's British, but his fleet were generally heavier ship for ship, so it made for an interesting game. We used his Quick Play Naval Rules for the engagement as they feel like an age of sail battle without bogging you down with rules. 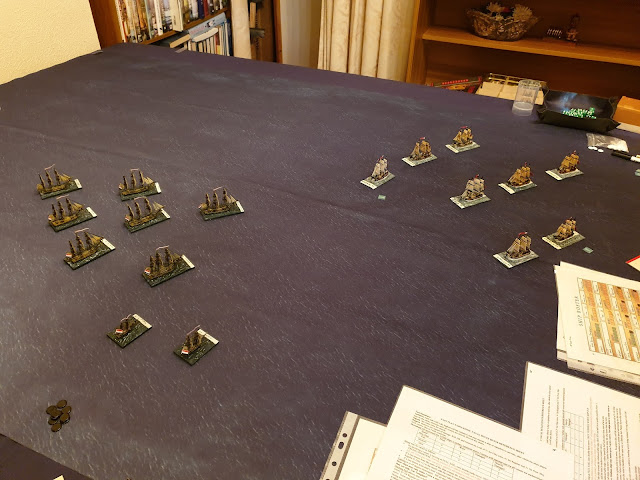 I messed up my deployment badly, so spent the first turn trying to get my ships into the semblance of an order of battle, before we hit each other at the start of turn 2. 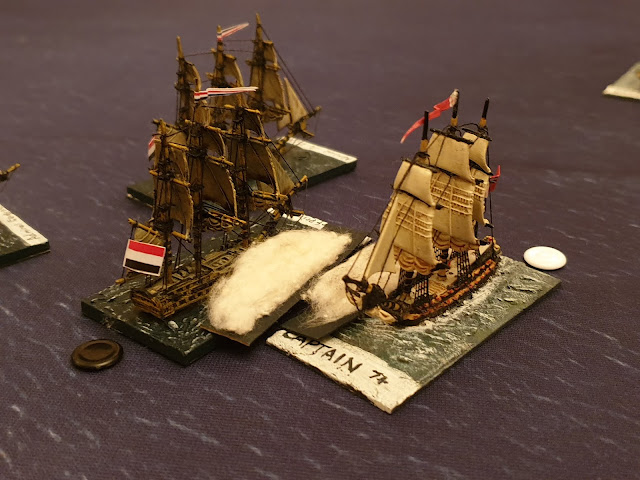 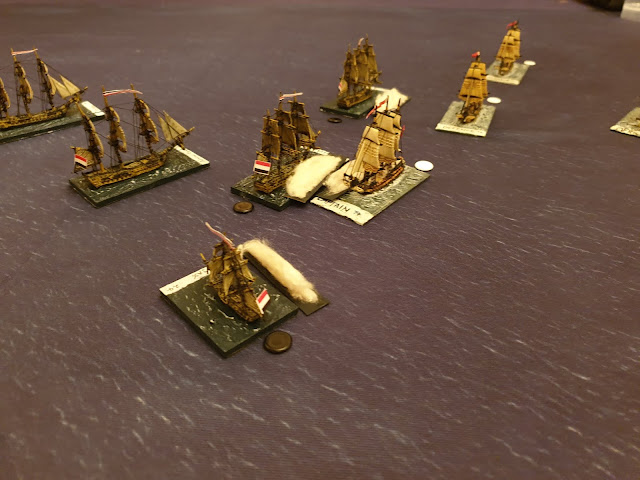 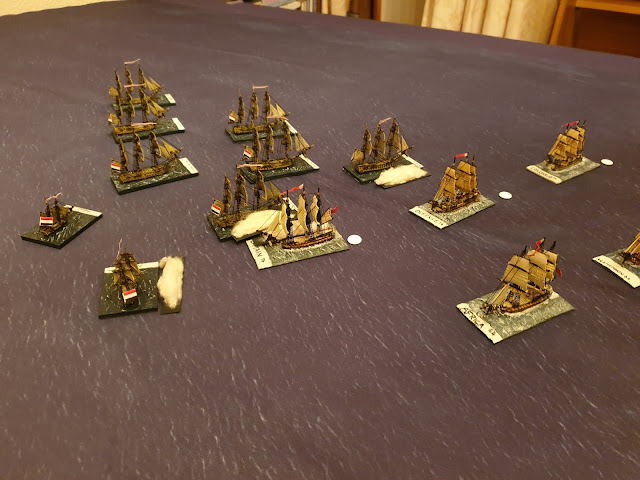 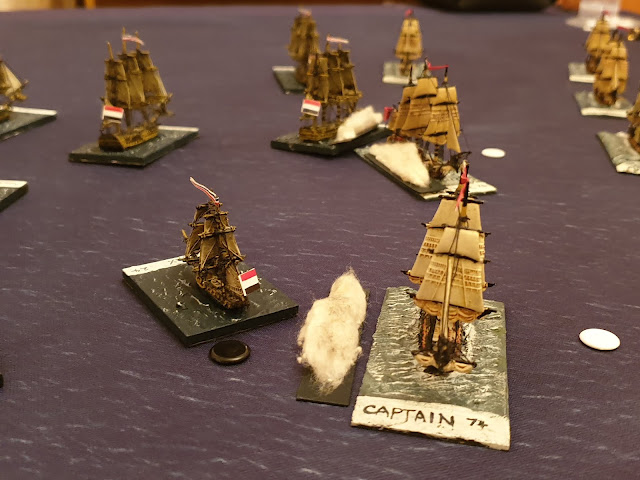 We ended the game on a draw as both fleets were about to begin manoeuvring for their second go past. Thanks again, Neil, for the game, I really enjoyed myself. 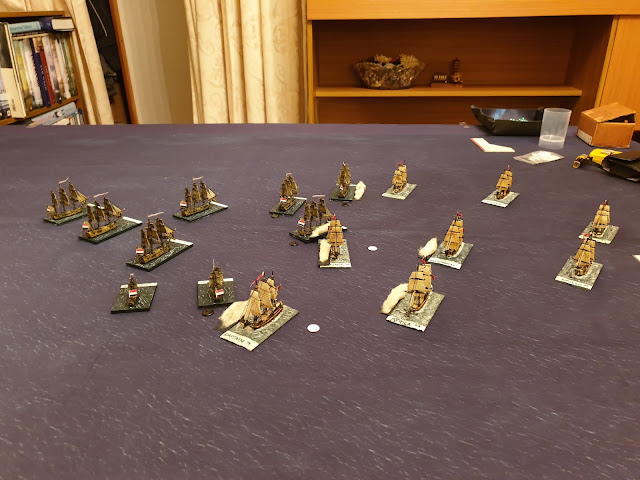