I noticed back in Zomtober that my WW2 German force was lacking some really vital things; transports. I have a few cars floating about but nothing in terms of munition and supply transports. So a trip to Rubicon and an additional Warlord Games order and I think I have that issue fixed for the moment.

The 3 identical trucks are all German Opel Blitz's from Rubicon and are what every 28mm German player uses as trucks, but the Ant Guy British truck from Warlord was my attempt to make my fleet more interesting. If my research is correct these little trucks were common at the start of the war and enough were made that I feel I can justify it's use in my convoy. 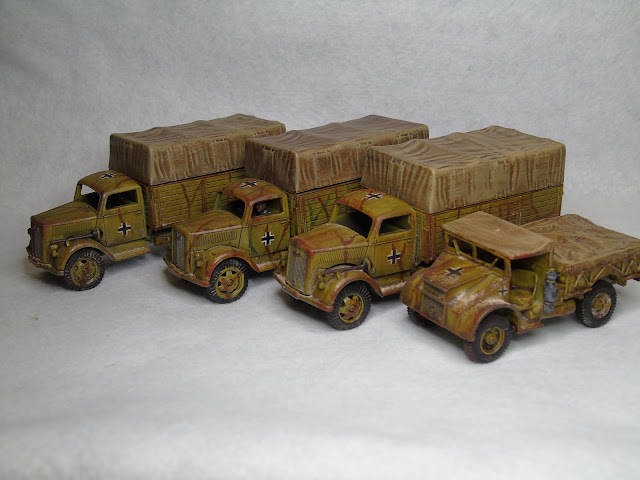 The cart was something I really wanted to do. While in Bolt Action circles trucks and armoured half tracks are remarkably common the German army was heavily reliant on horse and carts, so this was something I wanted to replicate. The kit is from Warlord games and I have no doubt it will get a partner in the future. 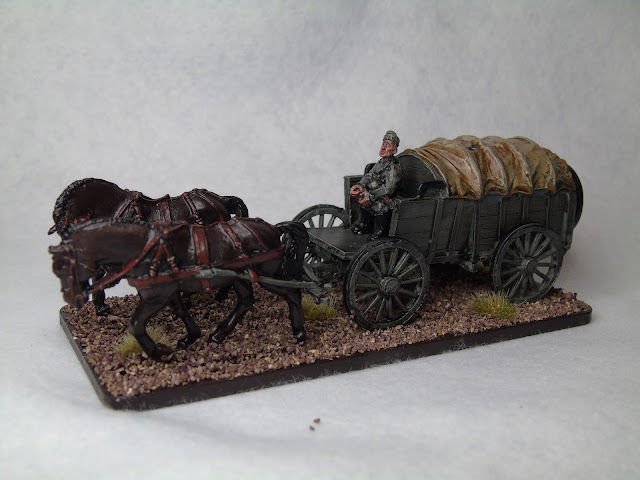 A forest in the making

“Some of my kin look just like trees now, and need something great to rouse them; and they speak only in whispers. But some of my trees are limb-lithe, and many can talk to me.”
- Treebeard

A couple of weeks ago I painted up an ent on a whim and when I wrote a post about it, I mentioned that the rest had been packed away. Well it turns out I am weak when it comes to sticking to a plan*, so back into my lead mountain I went to dig out the only treeman model I knew I had ready built**.
The model is from Hasslefree Miniatures, although I can no longer find it on their site. It is a weirdly posed model that is nigh on impossible to get a decent shot of but I really enjoyed painting it. There is something really satisfying about painting ents, I don't know if it is just that drybrushing the texture gives a win so easily but I would recommend it if you have had a bad day.

*It's even in my blog header
*I am trying to stick to
my plan of finishing models
rather than starting new ones. 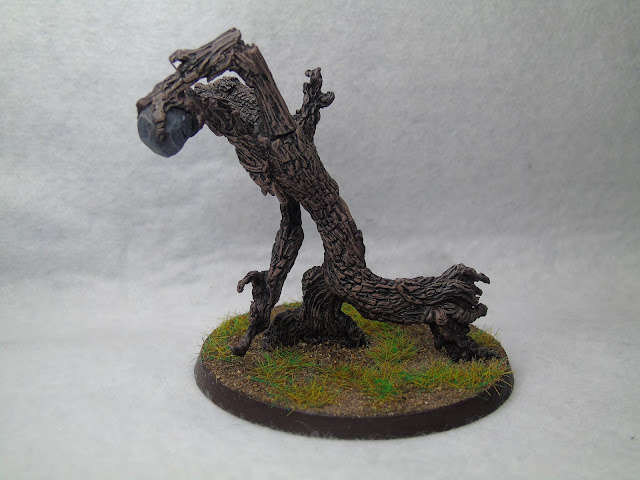 Back in August last year I finally cracked and started buying AOS Stormcast Eternals in the vain hope I might be able to get a game in. I painted my minimum army of a character and 2 battleline units and then, getting a tad carried away, bought another character and a different battleline unit for variation, which were promptly built, undercoated and then left on a shelf to get a light coating of dust.
At the start of this year I made the decision to limit the amount of new games I got into and to try and finish some projects off, selling those just just were not going anywhere. As part of this drive I managed to get a demo game of AOS in with my local GW manager (Andy in the Romford store is the best store manager I have ever met) and can confirm that the rules really are brilliant. I know, however, that I am unlikely to get a real game of AOS in before 2018, but carrying on my spring clean meant these guys had to be finished and put away to clear some space and it was a useful exercise to write down my recipe as this was another project I didn't do it with. The important thing is they will be ready when I am in a position to play and, now I have played a demo, I know they are a set of rules I want to play. 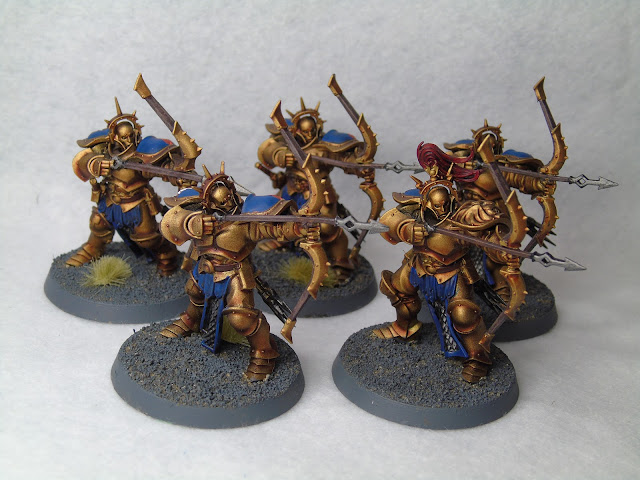 My unit of Stormcast Judicators and Knight-Questor. I wanted a to add a classic feel to my Stormcast and a proper shield and sword hero and a unit of archers felt like the difference in an army that otherwise felt really alien to me. 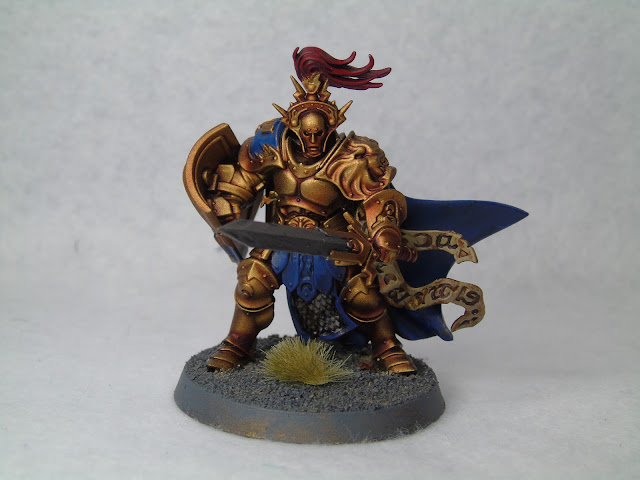 “Men may sail the seas for a lifetime and seldom, if ever, come in contact with the nightmare monsters that inhabit the caves and cliffs of the ocean floor. Gazing down at the slightly muddy water, the men of The Unicorn saw a squirming mass of interwoven tentacles resembling enormous snakes, immensely thick and long and tapering at their free ends to the size of a man's thumb. It was a foul sight, an obscene growth from the dark places of the world, where incessant hunger is the driving force. At one place, down near the bulge of the hull, appeared a staring gorgon face with great lidless eyes and a huge parrot beak that moved slightly, opening and shutting as though it had just crunched and swallowed a meal of warm flesh.


Not long after I bought the Juliette, I started looking around at other piratey things I could add to my collection and I found this kraken on eBay. I have no idea who actually makes it but I was really captured by the idea. As my ship project had stalled badly this went into my lead mountain and that's where it sat for quite some time.
In my head I have a vague idea of doing a multi-ship free-for-all game that involved the crew on deck as much as the ship's cannons themselves, but I wanted some way of mixing it up and a kraken felt like the right answer. 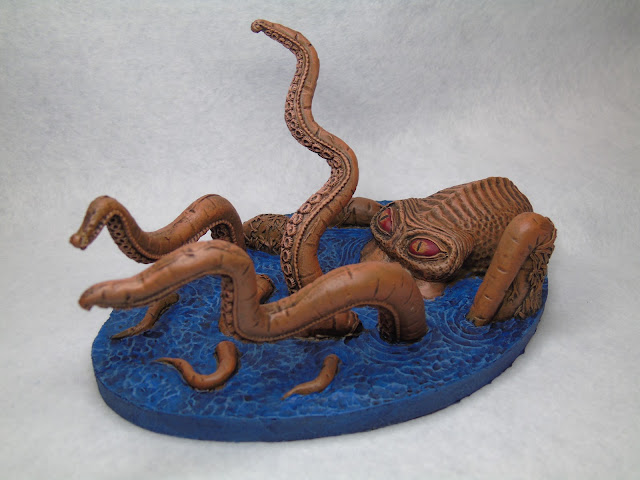 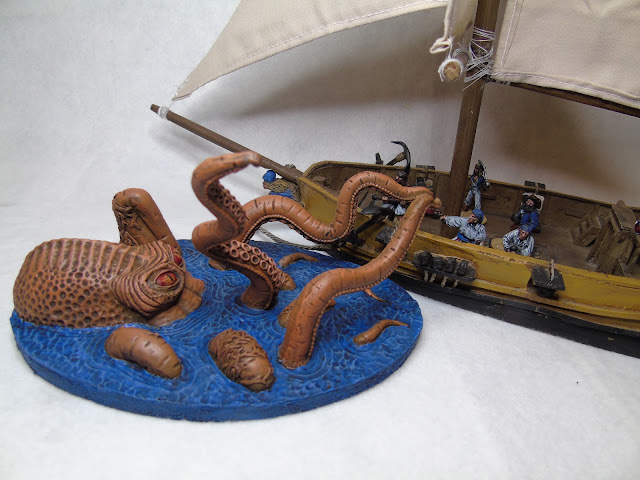 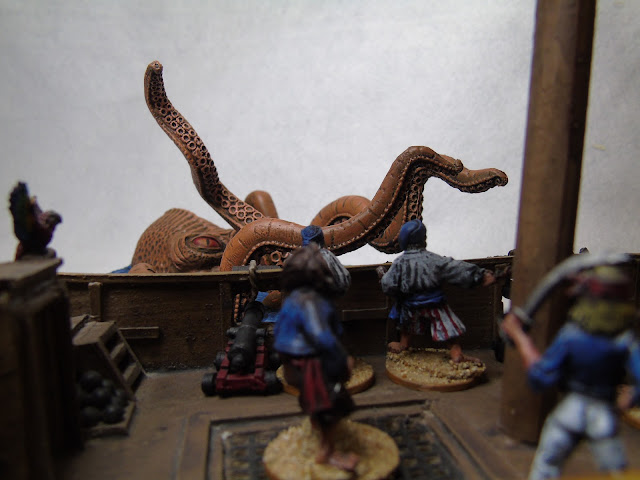 'Take what you can, give nothing back'
– Pirates of the Caribbean

The Juliette is a pirate ship I bought back at Salute in 2015 after being talked into buying one by both the guy on the stand and my dad. She was built within a week or so of the show, but there is always something in a big project that you just can't quite get right and makes it stumble, in this case it was the sails. I wanted to be able to move figures around the deck, but also have something that wasn't just a really nice hull with a dowel rod to represent a mast. So this was my middle ground, sails well above the deck, so the space is free for my clumsy hands. She isn't a display model, she is a wargaming ship. 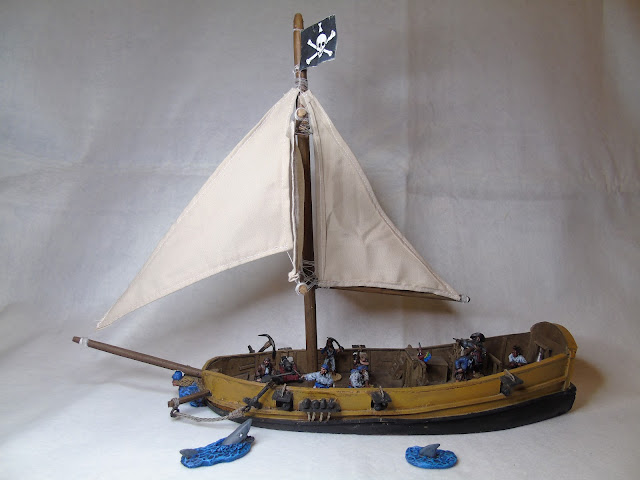 The ship, herself, is from Ainsty Castings, while most of the mast components are home made from dowel rods. The sails were made from pillow cases by my sister in law after my first attempts looked terrible. The details, including rails, ship bell, wheel and cannons are a mix of the bits that come with the hull and extra stuff I picked up from Games of War. The figure head is from Britannia Miniatures and is way too grand to go on a small sloop like this but it's pirates, so who cares. 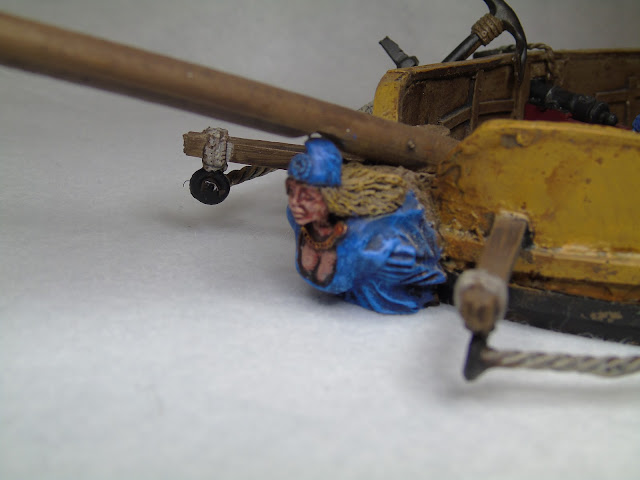 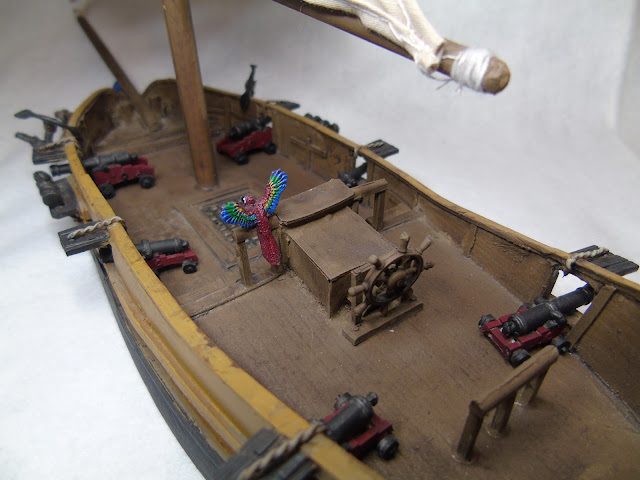 The guns are a laughable mix of four pounders and a single pair of six pounders at the front. I might need to do something about them if she is to have any chance of getting a prize. 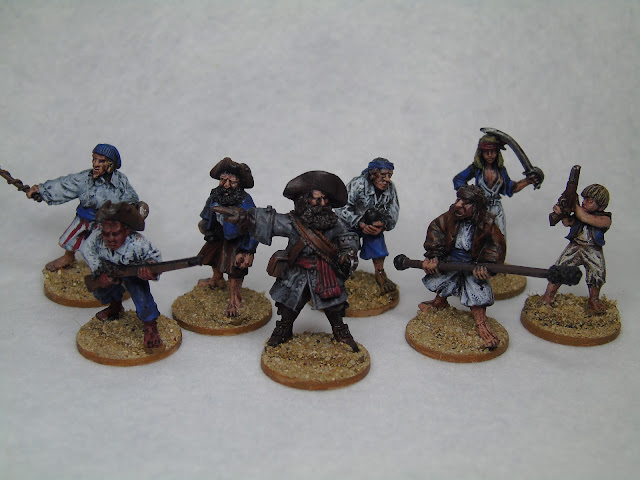 The crew are, mainly, from Foundry Miniatures, bought on the same day as I picked up the ship, but there is a North Star Miniatures cabin boy and a Reaper Miniature pirate woman. The parrot is also from Reaper, while the sharks* are from Black Tree Designs.
* You have to
have sharks 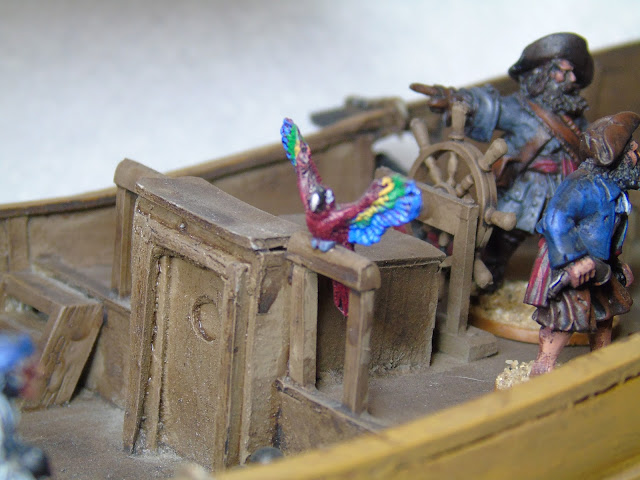 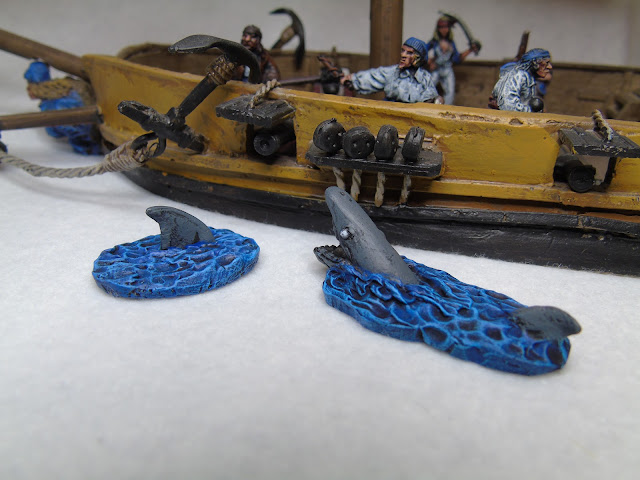 With the Pirates of the Caribbean series being on tv recently and the wife and me watching Black Sails, I dare say more pirates will grace this blog, and I already know exactly what my next post will be about. . .

Warlord games regularly do a tank for a tenner deal on holiday events across the year, so last year the two were a German Hetzer for March (mad as a March Hare'tzer) and a Priest for Halloween. Foolishly I didn't jump on the Hetzer but I did pick up a Priest and it became an integral part of my Cam'Bridge too far tournament plan, along with an AEC armoured car I picked up back in 2015 . . . 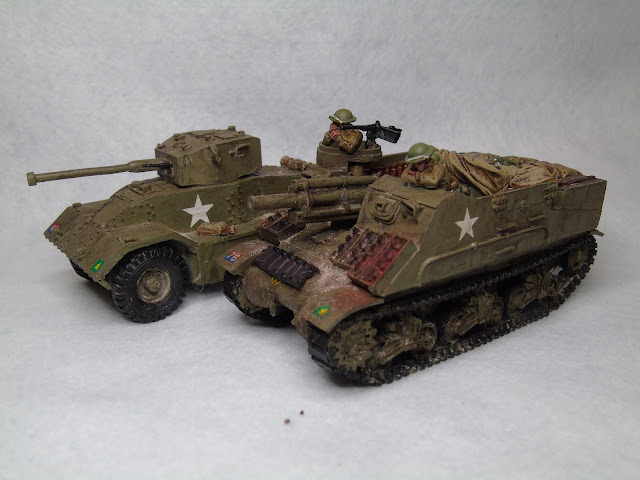 The Priest kit gave me two issues in terms of making it Canadian; firstly, it comes with American crew, so to convert it to a Canadian unit I copied one of my club mate's ideas, which was to saw the helmets off and replace with British versions. Secondly, the Canadians used modified Sextons and not American built Priests, this problem I couldn't do anything about. The stowage is from a mixed bag of bits I keep on my desk that is filled from at least 4 different companies now, possibly more. 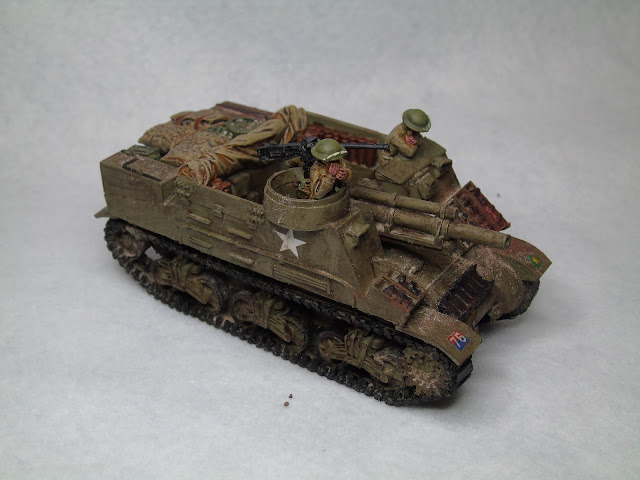 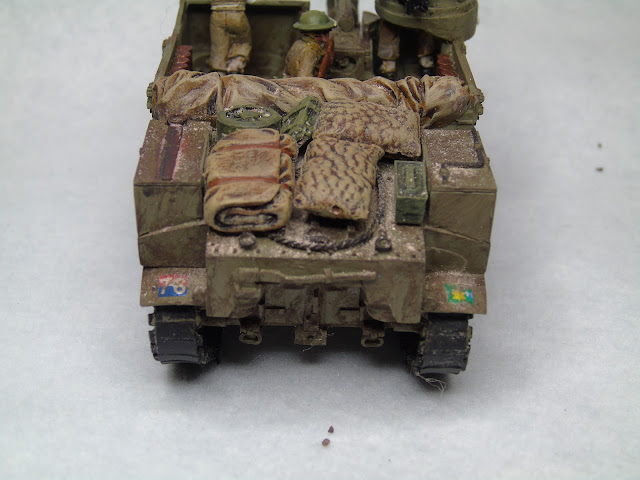 The AEC was a much easier build as I had nothing to do to it except make sure the markings were as close to realistic as I could manage. 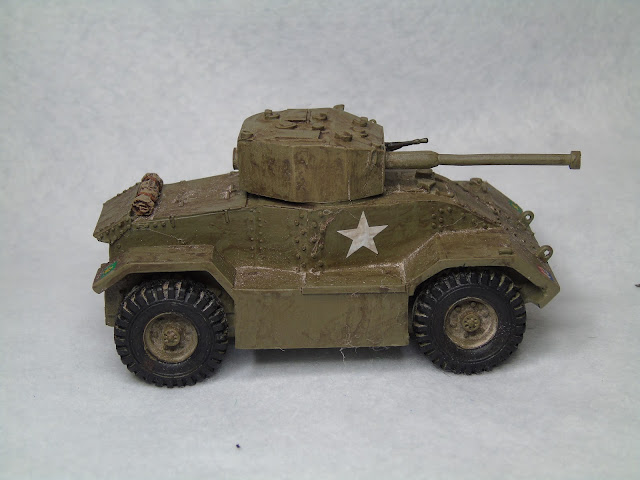 I even managed to get onto a video blog: https://www.youtube.com/watch?v=tUHNW9d-ryU

'My home is deep in the forest near the roots of the mountains'.
- Treebeard

It has been a while since I did any ents but as I am having a bit of a sort through and a clear out and I came across a small collection of built and unbuilt treemen from various manufacturers that I bought after the Last March of the Ents game. The unbuilt ones will be wrapped back up and stored for later, but the built ones are too fragile for such a treatment.
If anyone is on Facebook I would recommend following Warhammer TV, even if you are not interested in their products, their daily how-to painting tutorial is actually really interesting and they recently did one on how to paint wood. So picking up one of the ents at random, I decided to try it out.
The one that was picked was an Otherworld Miniatures treeman, who bears a starting resemblance to Treebeard himself, and a few hours later I had a finished model that I was actually really pleased with. I am trying to keep all my ents in different shades and different highlights etc, so painting them all at different times is actually a good thing in this case. 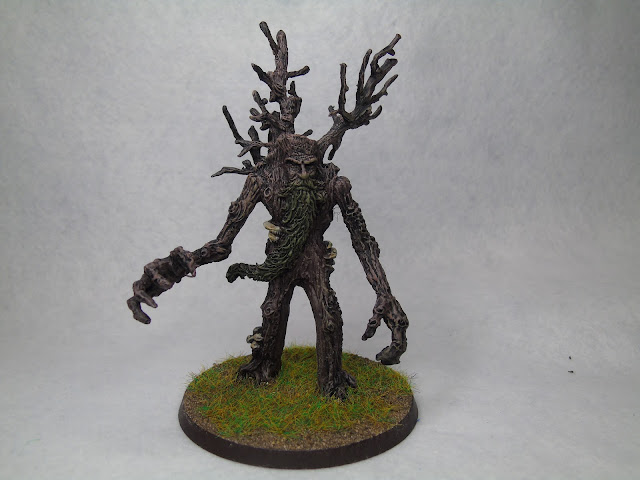 Now I have a bit of a hankering to paint a few more.

I got it into my head on Sunday, after spending Saturday with Neil and Paul from SEEMS and gawping at Neil's newly finished Norman army, that I really needed to get my arse in gear and finish some projects and clear my work desk as I have a whole Gripping Beast metal Viking army* that I really want to do the best paint job I can manage and not have to rush it at all. There are a few projects that I can happily put aside and walk away from** but there are a few more that are so close to being finished that it seems daft not to power on through and get them done rather than let them fall by the wayside.***
Nothing special for my first post (just another unit of French Napoleonic) since that realisation but I am getting so close to a point where I could play with this army that it is getting really exciting, I just need to really start persuading my other mate to get painting.
* and a Welsh one too
** I plan to sell a few bits off too
*** I always seem to be in this mood in the pre-Salute build up 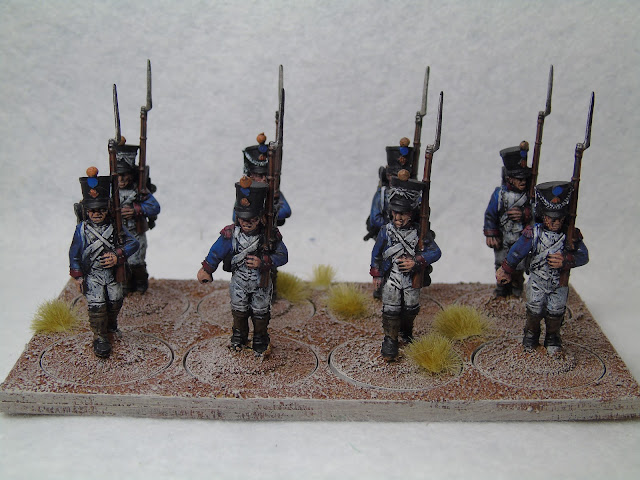