A harder one to explain but just as interesting a project are the buildings from Tablescape that I picked up to compliment my Sharpe Practice figures. The six buildings came built and painted so there is nothing for me to add about them, but the courtyard was something I added from my bits box. 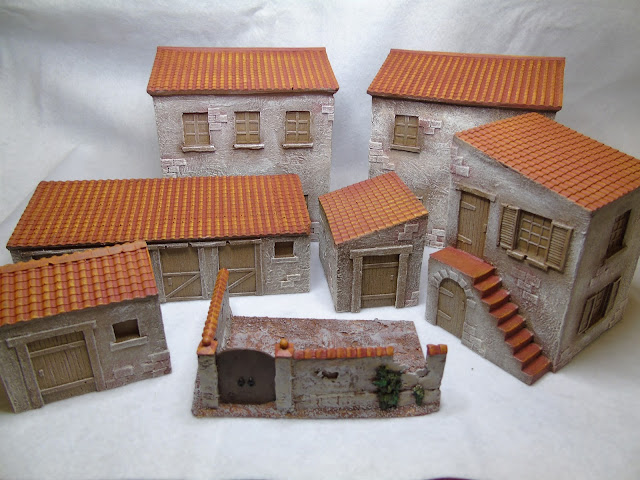 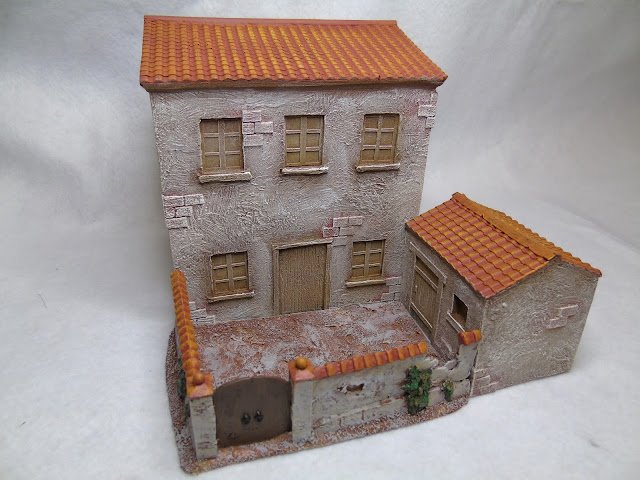 The courtyard was built from plasti-card and some metal walls that I think I picked up at my very first trip to Salute back in the mid 00's. They have been in my bits box ever since and I have never really known what to do with them, until now that is. 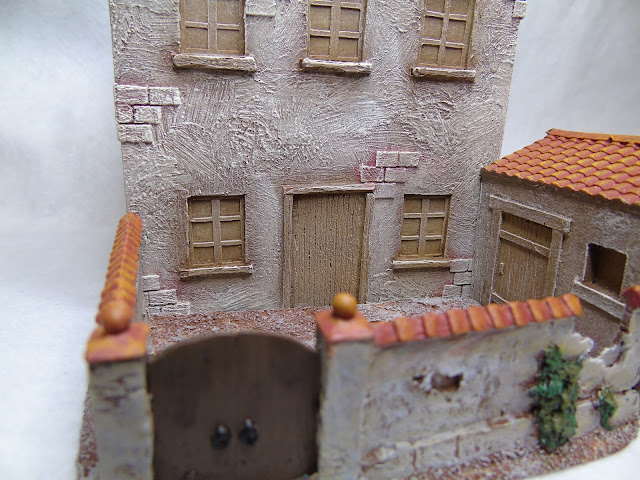 One of the things I like about these buildings, other than sheer convenience, is how easily you can sit them next to each other to make different shaped structures, It means you never need to play with a town made up of the same 5 houses ever again. 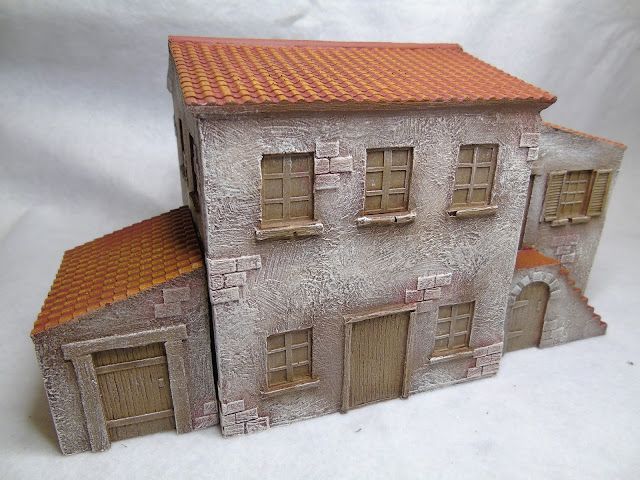 I've already played a game of Bolt Action (Italian campaign using my Canadians) with these so in my head they have already proved their own usefulness, but the real test will be if I manage to get my French finished and use them in a game of anything Napoleonic.

Carrying on with my scenery push one thing I really wanted to see on a gaming table was haystacks, high ambitions I know. These are from Warbases and were exactly what I was looking for, nothing too stylised and in big enough numbers. 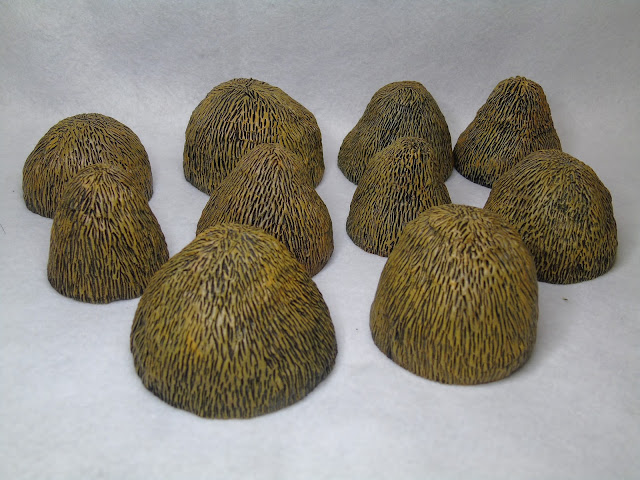 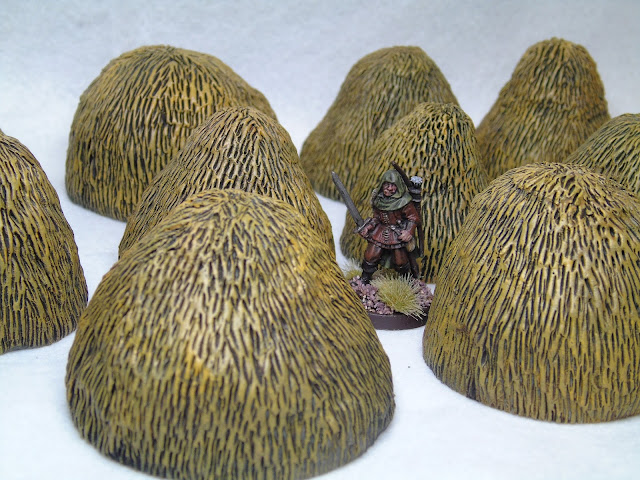 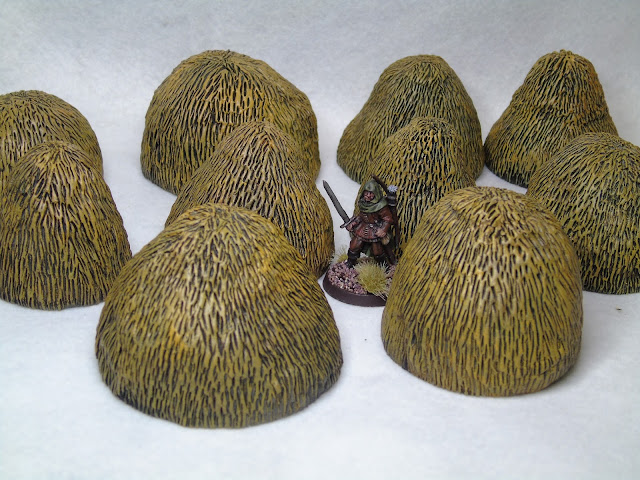 Normal life in a conflict zone

I have been saving up the odds and sods that I have been painting up as part of my Afghan project and I definitely have enough to constitute a post, so here it is:

First up are the civilians themselves. I've kept to the same basic colour schemes as I did my fighters as they are supposed to blend in. I reckon I still need some more but this is enough for the time being. 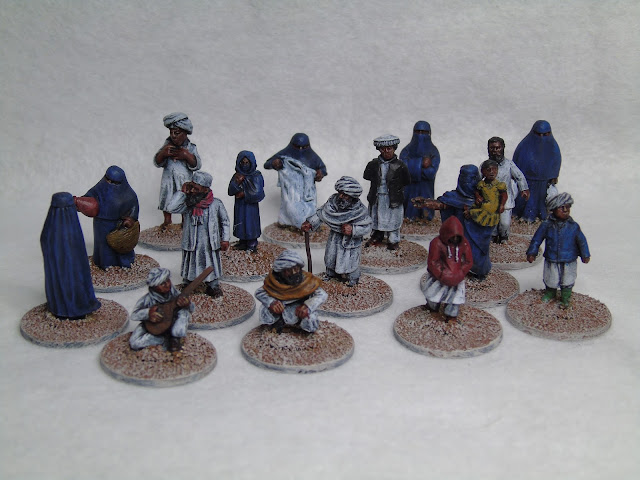 Next up is the livestock; the two big bases of goats have already been used in a game but the others are new additions. 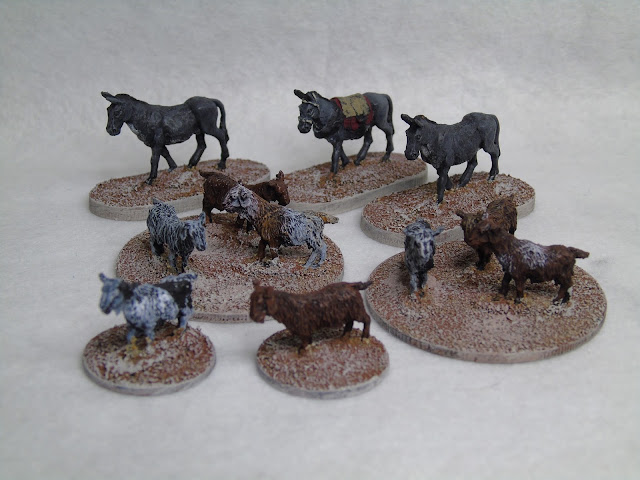 These are the bits I am most pleased with. A spur of the moment Salute buy and what a buy they have turned out to be. 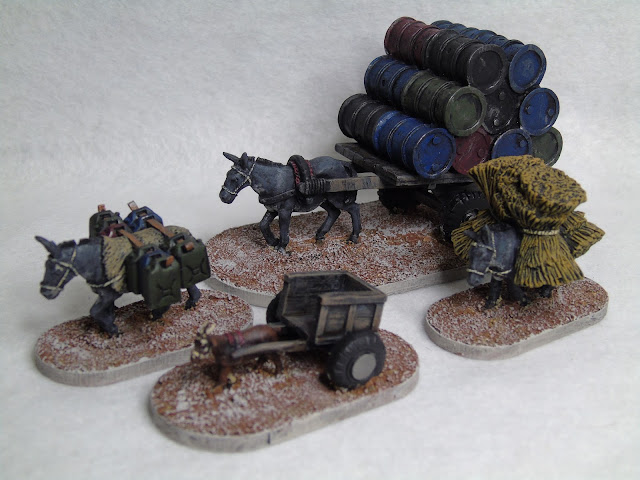 This last thing is one of two road signs I picked up with the satellites and air-con units. I'm trying to find some election posters for the other one but as some basic advertising, I think this is ok. The real test is whether I've picked a coke sign with the right language on it. 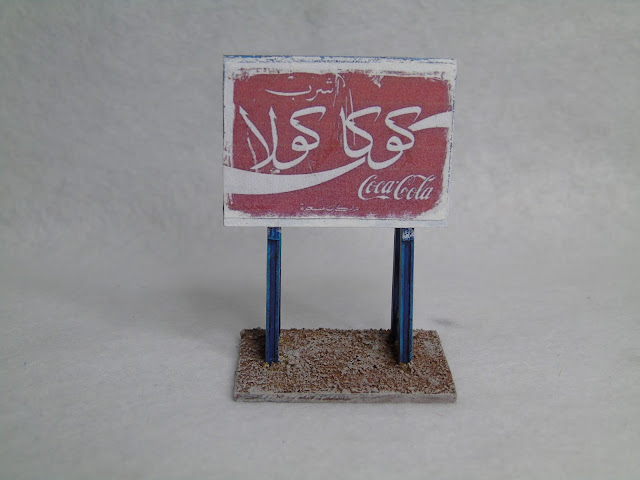 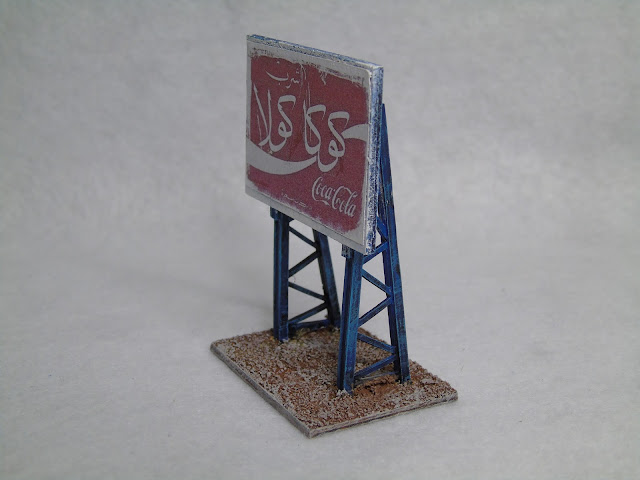 After getting back from a quick trip around Flanders and Belgium I have found myself inspired to pick up the collection of Sarissa Precision French shops that I bought last summer and actually finish them, but that isn't what this post is about. That inspiration also got me started on a few other scenery projects that have sat half-finished or very nearly finished, the first of which is this one.
I have posted about my Afghan buildings before and used them in a few games but they were always missing something, something that actually made them look lived in. I had known that Empress Miniatures was planning a range of modern building accessories for a while but when Salute came and went without any sign of a release I gave up hope that they would be out anytime soon until a couple of weeks ago a little message went up on their facebook page and the bits were live. A cheeky little order later and I had a pack of satellite dishes, some air-con units and some road signs. 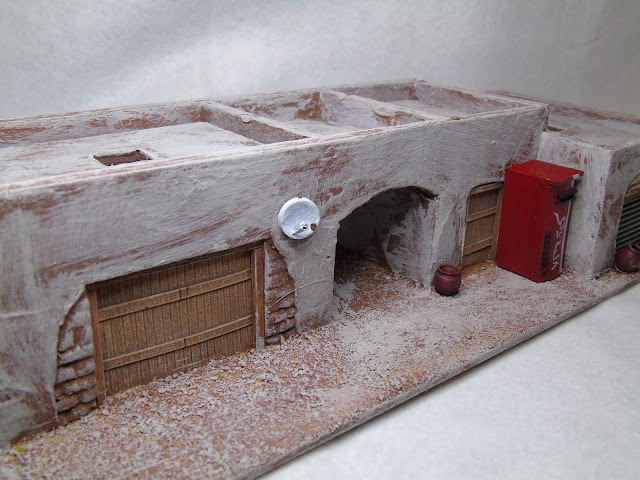 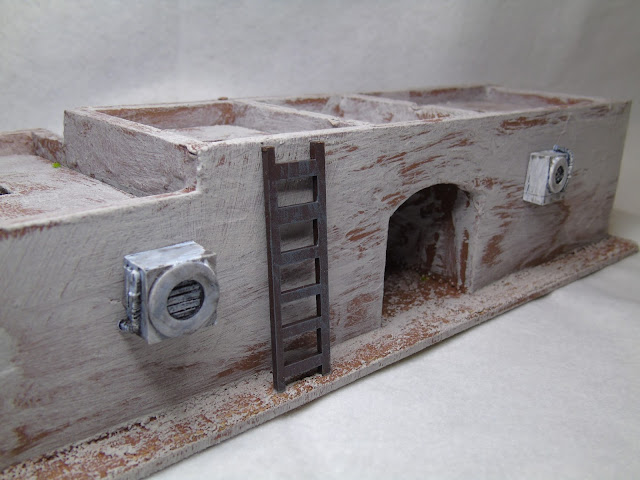 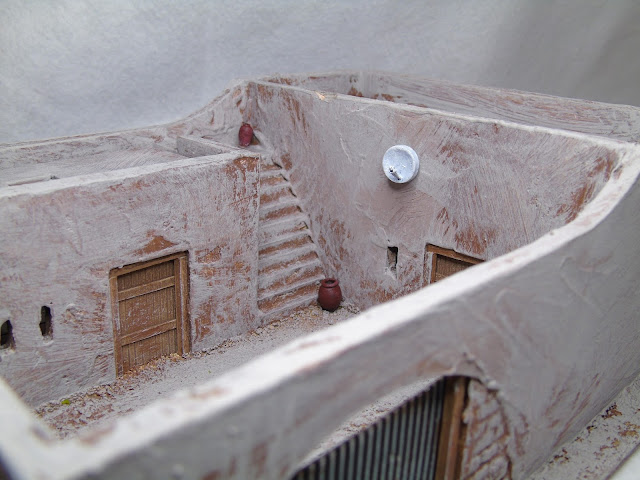 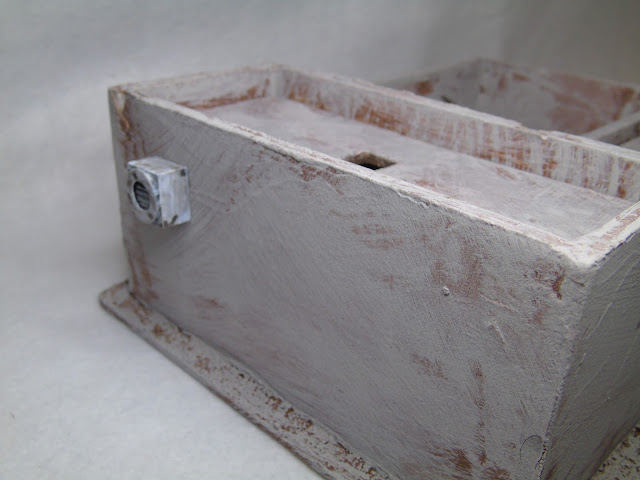 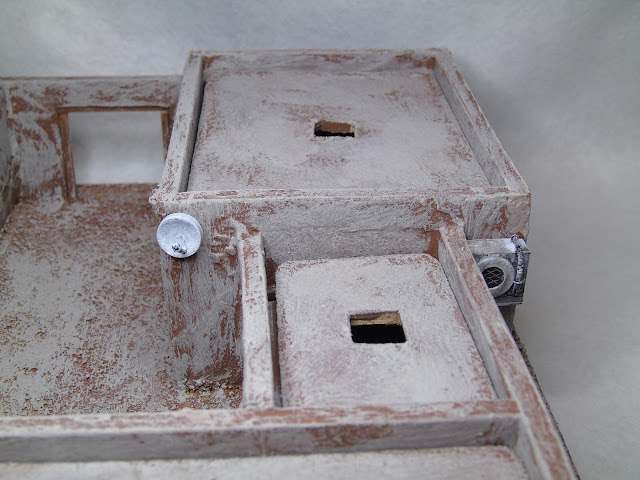 I've still got a few of each to use, plus the road signs to finish so there is more to come in the future.

If I could ever stick to one project for any length of time I reckon I could be dangerous, but as there is no chance of that, my safety lock is still firmly on. Now, I would like to say that this was a terrible accident and that I didn't mean to do it but I think we all knew this would happen at some point. I have been a big fan of Sharpe for years and I have always drooled over Napoleonic armies in the magazines but refighting Waterloo just isn't going to happen due to a lack of commitment on my behalf and a lack of opponents. With all the fuss about Sharp Practice 2, I figured I might have solved my problem.
Being aware that if I want a game of something I have to create armies for both sides I still wasn't sure I had what it takes to actually ever play Napoleonics, so I went to Salute with half a plan to look to see what was out there but not to buy anything. Obviously, I went home with a plastic box of Warlord's early French, a 6 pounder cannon and a pack of Voltigeurs, which was swiftly followed by another box of plastics and a few extra sprues for good luck, a daunting amount of Napoleonics. 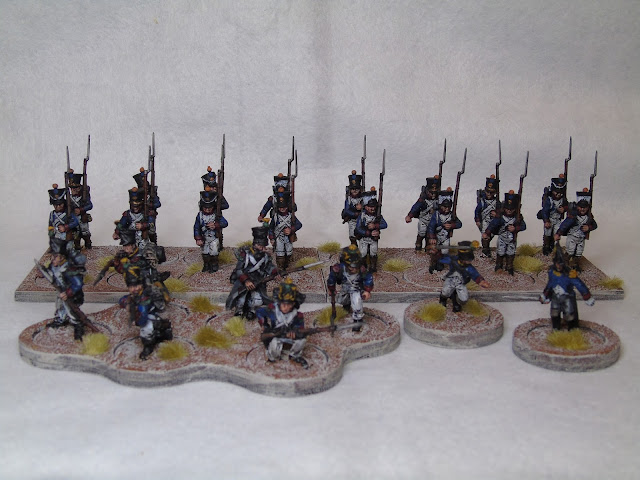 My force so far: 2 units of regular troops and their captain (Lv3), and one unit of voltigeurs with their lieutenant (Lv2). 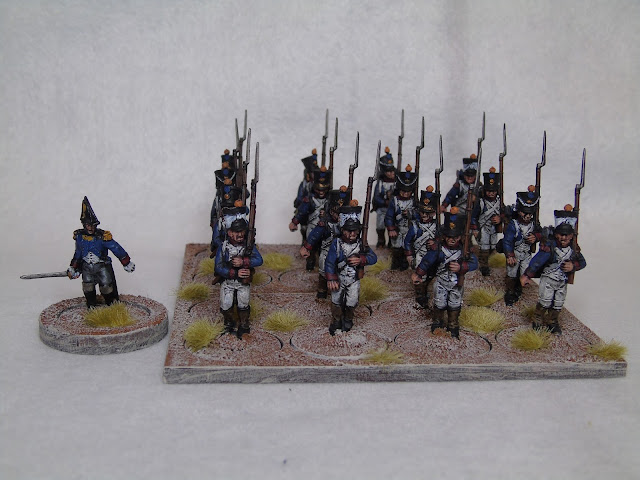 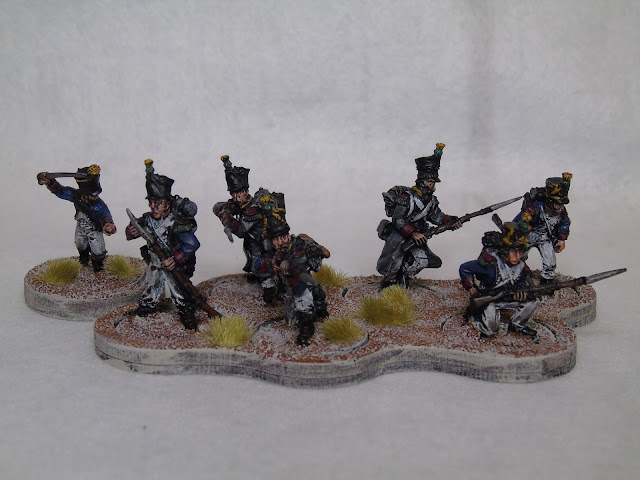 Lastly, my kickstarter pledge for Heroines in Sensible Shoes turned up this week and this nice little freebie was in it. It's completely unrelated to the main topic of this post but that exactly how my little blog normally goes. 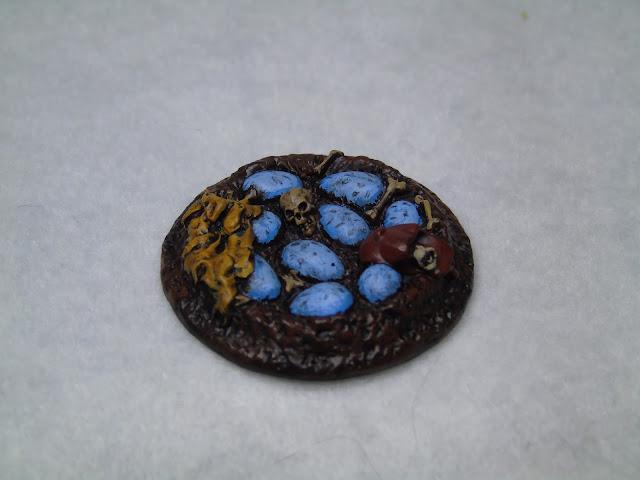