Fight for the village!

I was researching the English Civil War both in terms of historical research, but also looking at how other hobbyists have approached the subject, and I ran across the ECW posts Rob did at Four Colour Supers Minis. I've followed him for a while, but going back over his ECW stuff really got some ideas into my head and I found myself looking for Clubmen online.
The two sites I found (I have no doubt I missed others) were Warlord Games - who sold packs of 8 when I needed 12 - and Redoubt Miniatures - who let you buy by the figure, perfect. It probably has to be said at this point that the Redoubt figures weren't the best cast models I've ever received, but once I had them cleaned up I was pretty pleased with how they looked.
I'm not hugely sure what I plan to do with them, but I have a vague idea of sitting them in a settlement on one side of the board and firing at anything that gets within range, but that's a problem for after the lockdown is lifted. 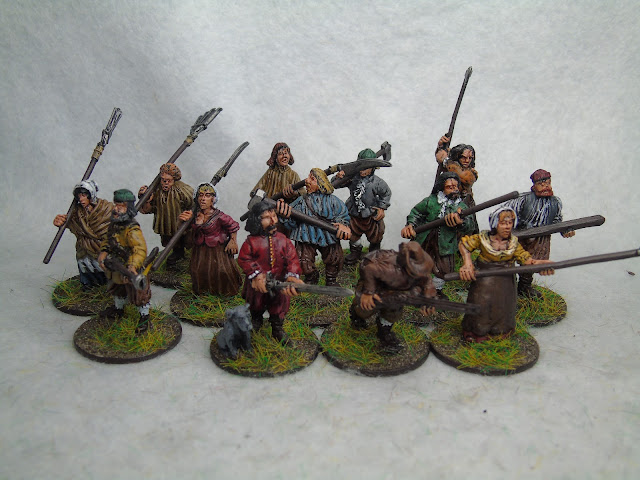 While I was there I also picked up a few other bits and pieces, never turn down the opportunity to top units up, and I picked up a few locals to fill my villages - the double of the same model was a freebie that Redoubt threw in (along with the extra clubman from the unit above). 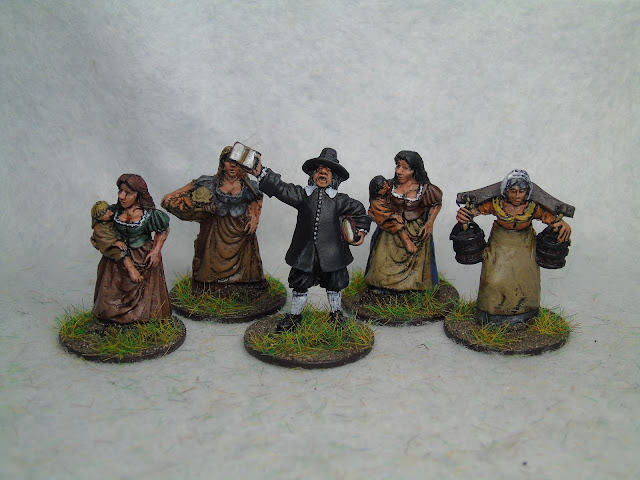 Ready to Charge Up Senlac Hill

Another one of those long over due posts, these figures were finished in early March but kept managing to avoid the varnish and photo queue.
They are the last unit of Norman Cavalry (plus the warlord) needed for my Norman army (although who can say it won't have an extra unit or two added in the future) and are Gripping Beast as the rest of the army was. I still can't say I'm a fan of painting cavalry but they do look good on the table and are fun to use, so I am pretty sure I'll end up adding a lot more of them at a later date. ﻿As we are at what would have been the weekend of Salute, I figured it was time to start posting about the other big project I bought at last Salute 2019. Viking Shieldmaidens.
To be fair, this wasn't a project I caved and bought on the day, Gripping Beast had been doing sneak peaks for a few weeks before hand and then helpfully did a preorder scheme so you could pay in advance and pick up on the day. One drink lead to another and we all know what happens when you drunk shop. In the end, between preordering, picking up another blister pack on the day and a quick order when they released a unit of archers, I reckon I have about a 24 point Lion Rampant army which might need the odd unit or two topped up with one of the Bad Squiddo Shieldmaidens that are currently in my main Viking force. Plus with the two units of wolves from an post earlier this month, I'll have just over 30 points for a Dragon Rampant army.

The unit below is the first fully finished unit in the army, and is the basic foot Sgt (Lion Rampant terminology). The big thing that surprised me when I opened the box was that Gripping Beast have tried a new system for their weapons on this release, instead of drilling out hands the hands come with weapons already in them and its the hand that needs to be stuck to the wrist with a pin and predrilled hole. They were actually nicer to build than the older Gripping Beast ranges. It was another one of those projects where I topped up my wire spear collection ready and then didn't need to use them. 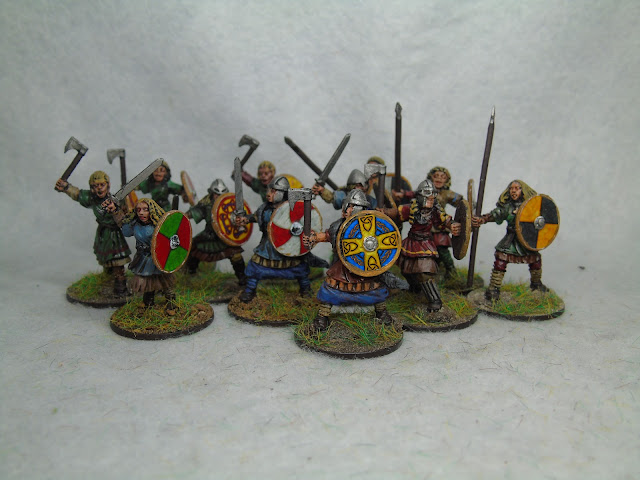 Nothing majorly exciting for this post, but the free time is giving me a chance to get on with units that might not be at the front of my to do list. I've still got 4 or 5 units left to build and paint for my 100 years war project (before I buy any more mounted knights) but it has fallen by the wayside as newer, shiner projects come along. However, this unit of English Men At Arms (Foot Sgts) was already built, sprayed and sitting in batches ready to be done, so it was just a matter of a couple of evenings of painting to get the unit finished, although in hindsight I probably need to give the unit a banner.
﻿ 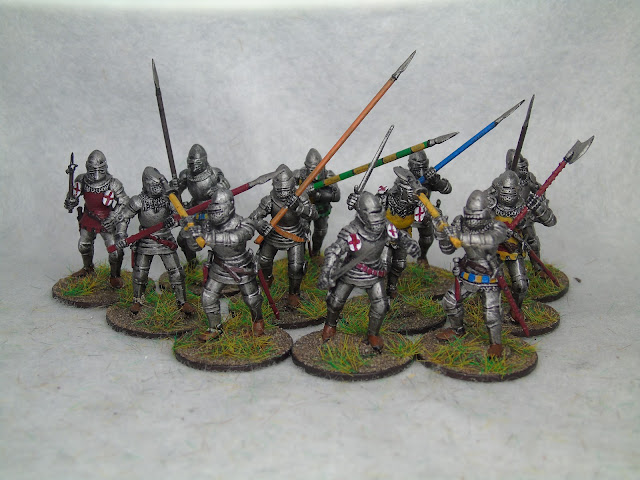 Settle down, this is going to be a long post.


So, one of the things that's been keeping me sane in the lock down is a series of books I was recommended by one of my mates - Mercy Thompson. I've been describing it to people as Twilight if Twilight was any good. It's a similar premise, a girl who lives in a world of werewolves, vampires and fae, except the main character (Mercy) is a shapeshifter who can turn into a coyote and instead of moping around, she's actually a full blooded, problem solver who has help from the men around her and doesn't just happen to be in a supernatural story.

The series has set off quite a few ideas in my head, the first of which was a straight 'what's the closest game that I can get into cheaply that will scratch the itch'. The answer turned out to be Dracula's America, a game I completely overlooked when it was released as I thought it looked stupid, but which on closer inspection looks like a clever set of rules (so sorry North Star).
This idea is as loosely influenced by the series as it's possible to be. The game only allows 2 supernatural figures per gang, so doesn't quite hit the idea of a full pack of werewolves going on a hunt but if we are merely taking the influence into a different system we can make this work. So, I bought the Vampire posse - Red Hand Coven, a pack of werewolves and the Twilight Order pack as something completely different. 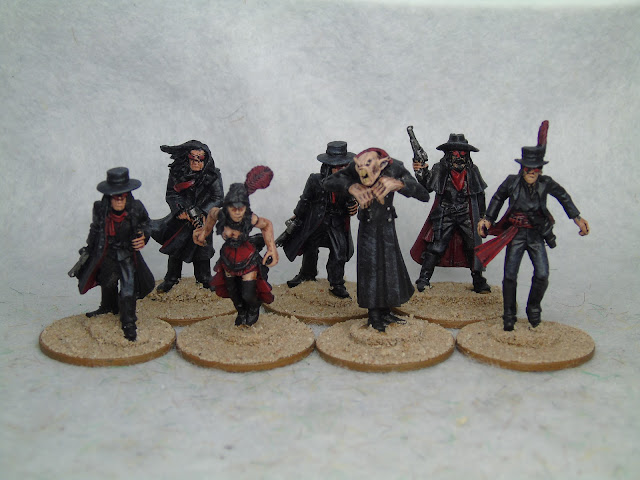 The Red Hand Coven pack is a collection of figures that has left me with mixed feelings for a start I got two of the same gunslinger by mistake (I mention it to avoid it being pointed out in the comments, I'm sure North Star would have fixed it if I'd been in contact with them).
Positives; I think the creepy gunslingers you get in the pack are brilliant and really look like wanna be vampires rather than random cowboys painted in blacks. The two vampire fledglings (two with feathers in their hats/head dresses) are, also, brilliant looking vampires - looking the part without going over the top.
Negatives; The vampire broodlord I think it is called looks so out of place in this pack - the only reason I painted it up was because it was a quick job and I didn't really need to add it to my backpile for later. 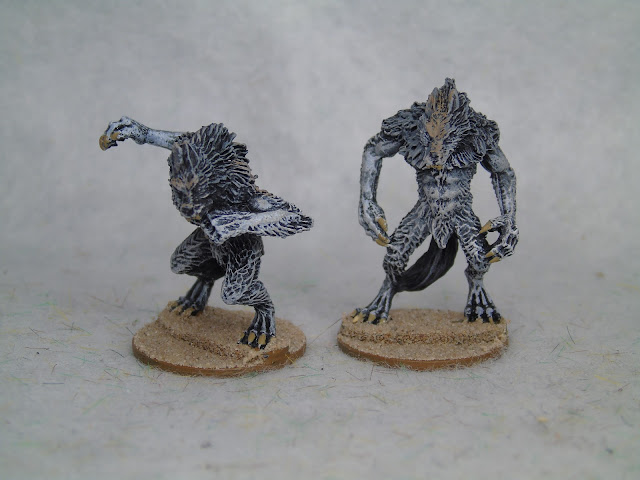 The two werewolves - or Accursed - are probably my favourite werewolf models that I've seen on the market and I suspect I'll be buying another pack or two of them in the future. The rest of the gang will be made up of cowboys from my collection as needed. 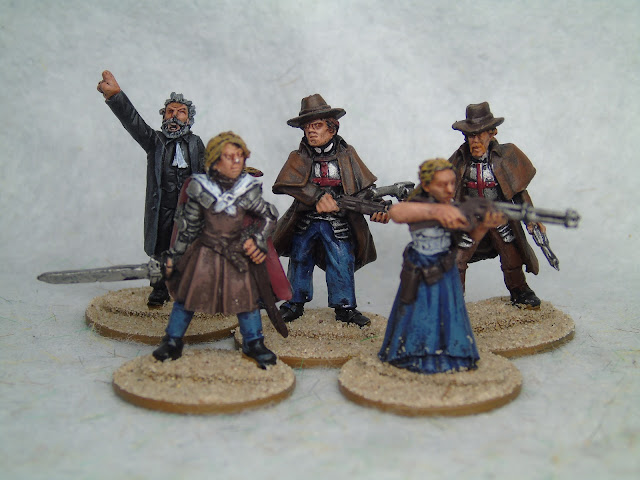 My attempt at a Twilight Order, a gang that is purely Dracula's America and nothing at all to do with the Mercy Thompson influence. In this case I bought the Crusaders (the equivalent gang upgrade of the vampires) and the Templar that came in the same pack. Delores and the preacher are from the Dead Man's Hand range and were bought to add a bit of flavour - the gang will then be bolstered by other cowboys from my collection as needed. ﻿ 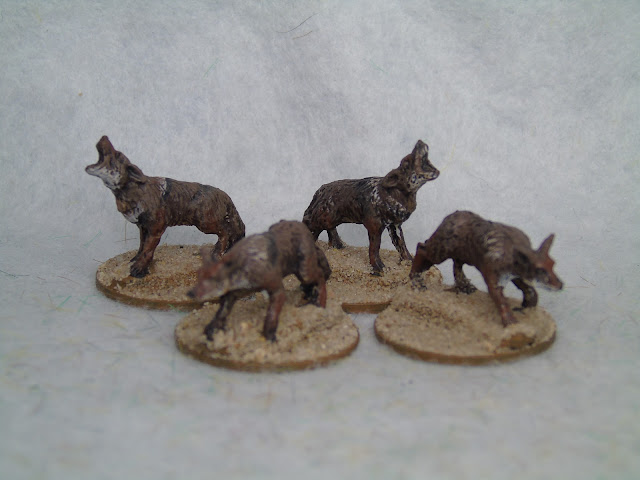 While I was in a Mercy Thompson and Cowboys mood, I decided to dig the pack of Great Escape Games Coyotes out of my backlog and get on with them. I've got no real plans for them beyond dressing the board but I might use one in a game as a skinwalker at some point, who knows. 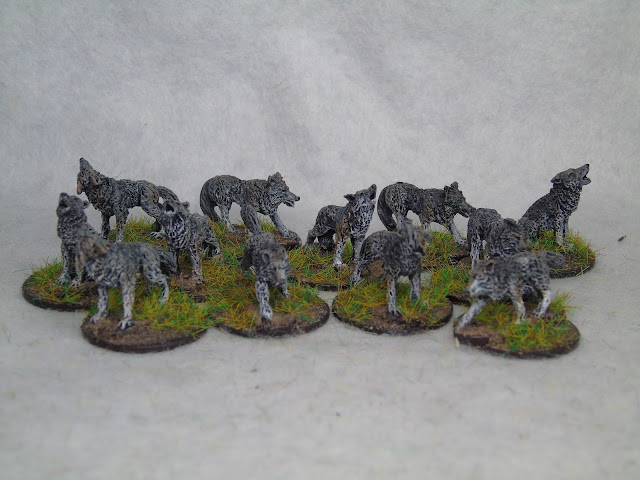 The coyotes and werewolf tangent then led me down another path, wolves. I've got another fantasy/historical mixed army that's been a slow burn project for a few months now and it dawned on me a month or so ago that if I was going to do the project properly I needed to really go nuts with the theme and I bought myself enough wolves to give me two units of lesser beasts for Dragon Rampant. I then used the same recipe as I did for the werewolves. I'll explain their army in another post.

I've got ideas on how to make a more authentic Mercy Thompson game in the future. but in the short term I now have 3 gangs for Dracula's America to get on the table.

In a mirror to what I think was my first proper post of the year, here we have the painted results of another box of plastic Warlord Games ECW cavalry, this time for the Royalist cause rather than Parliament's. I've got quite a bit more to paint for both sides of this conflict but it's good to be in a position where I can get the game on the table as soon as the lockdown is over. 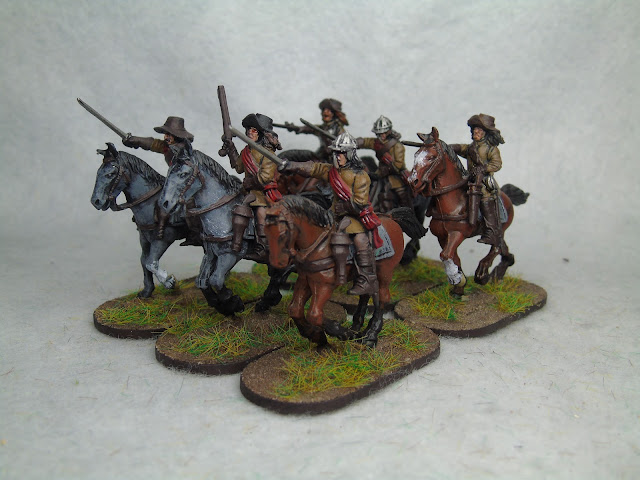 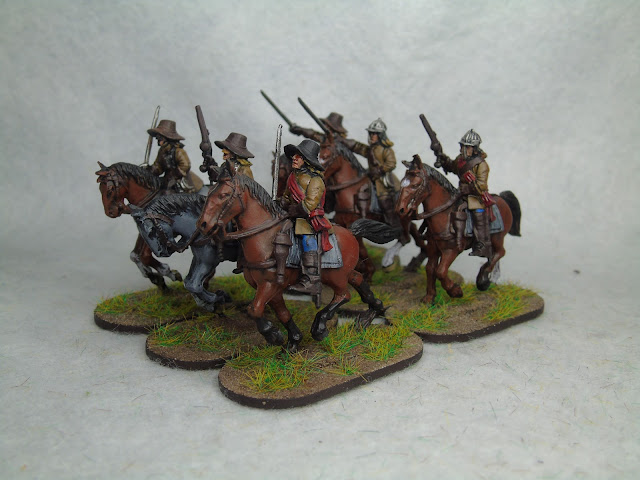 Like I said in the last post, I've been churning out figures at a fairly quick rate, so there are a lot of posts coming, but I've also had a chance to go through most of my backlog* and catalogue it, so I have a better idea of what I am dealing with**. See this as more of a warning that anything could get painted in the short term while going out isn't an option.

Muster for the King!

As I suggested in the last post, I spent March churning figures out at a considerable rate (not going out will do that to you) but I have been pretty bad at taking the photos and doing posts, which is something I plan to get better at now I'm getting a bit more of a routine going.
This post is the rest of the minimum troops I need to get 24 points of Royalist English Civil War infantry onto the table (with the last points taken up by more cavalry), in this case another unit of musketeers and a block of pikemen. As in the other units, the figures are all Warlord Games plastics although I have bought a pack of their metal command figures who will be spread across multiple units going forwards. 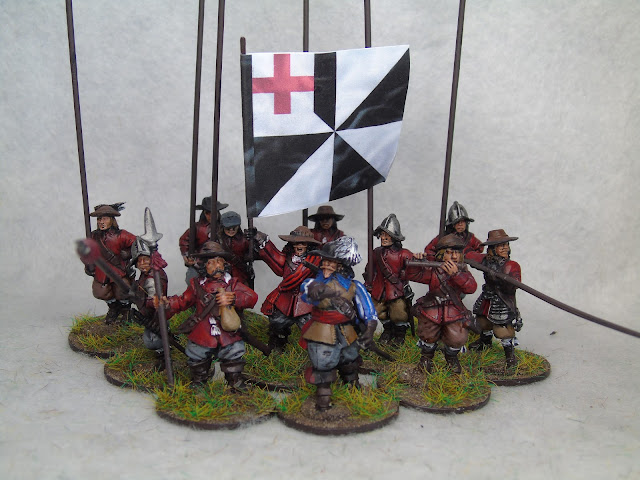 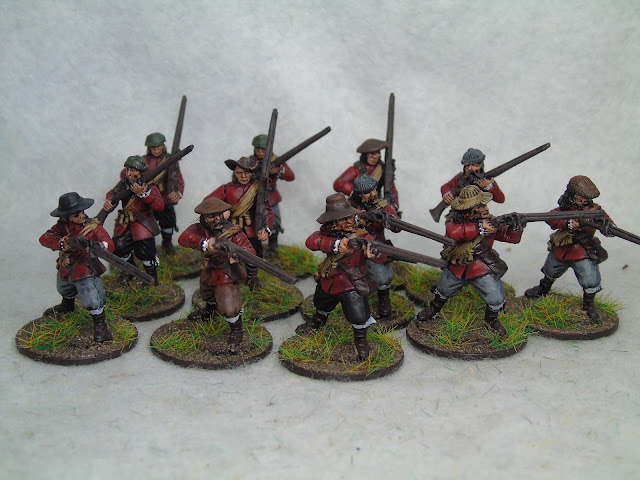