More from the seven kingdoms

I think it is fair to say that I have been drawn into this project in a way that I haven't been drawn into one for a while. Here are the next three units for my house Baratheon, Lion's Rampant, come Saga, army. This is a project I have basically been thinking about almost non-stop since I started it, so I am desperate to get it finished and on the table as quickly as I can. 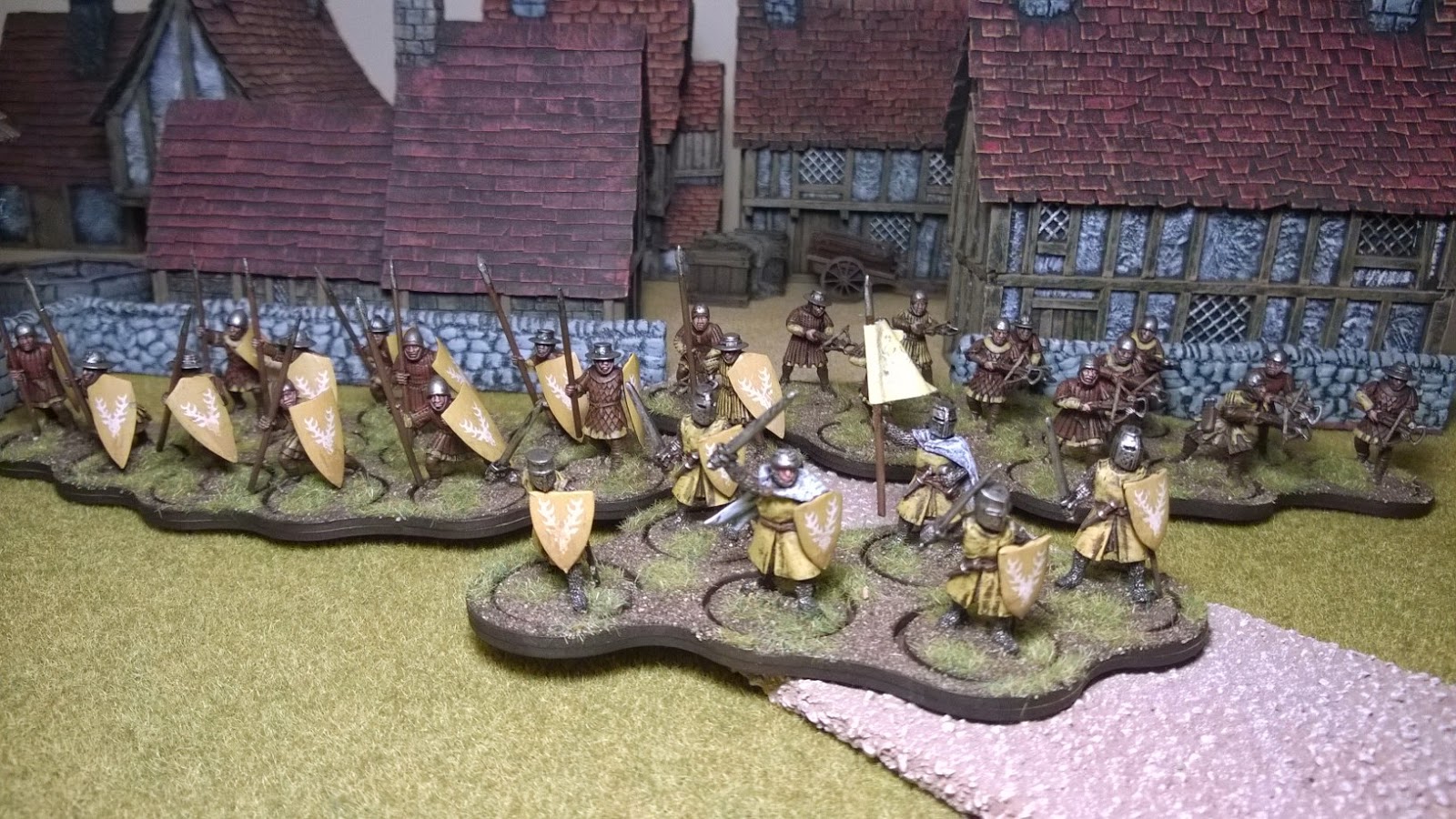 The foot men at arms are Crusader Miniatures foot knights, they come in packs of eight and, although, you only need six for a unit in Lion's Rampant, I will get the other two painted up so that I can use these guys as Hurscarls in Saga games. The two with white cloaks are both still Crusader Miniatures, the one at the front is my army's leader and is from the same pack, just with the addition of a Gripping Beast plastic Saxon cloak that fitted almost perfectly, and the other is from a separate pack of a banner knight on foot and mounted, so if I decide to do some mounted knights I can put a banner in that unit too. We have a rule in games of this sort of period at my club, if there isn't a banner in your leader's unit, he can't be much of a leader. . . 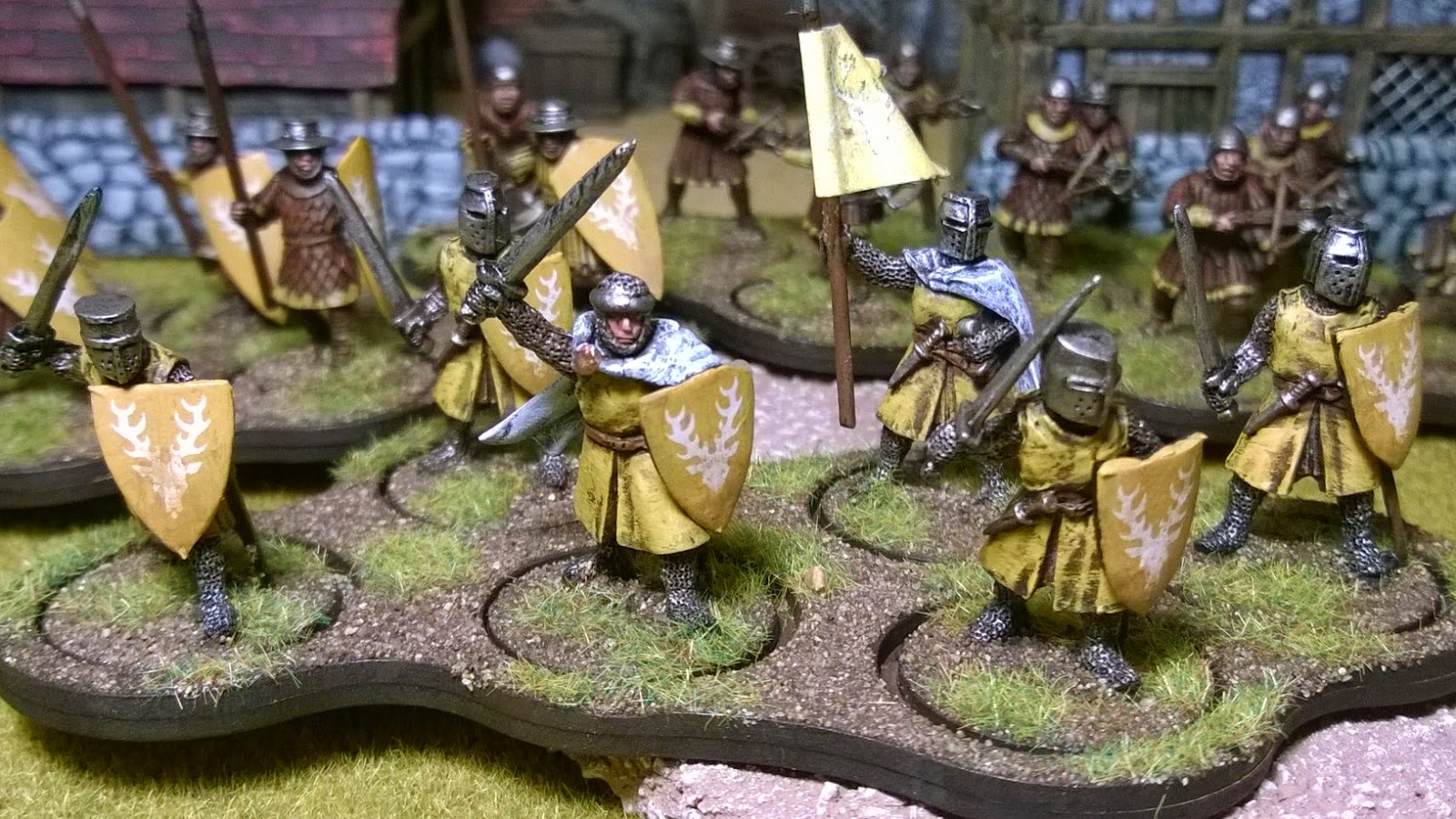 This is going to be the first of two crossbowmen units, the other is sitting on my desk after having just been under coated. The lack of shields really shows up how little yellow I have decided to put into the uniform, since I went into this project trying not to make my army look to garish I think its a good thing, but they do feel like they are missing out slightly. 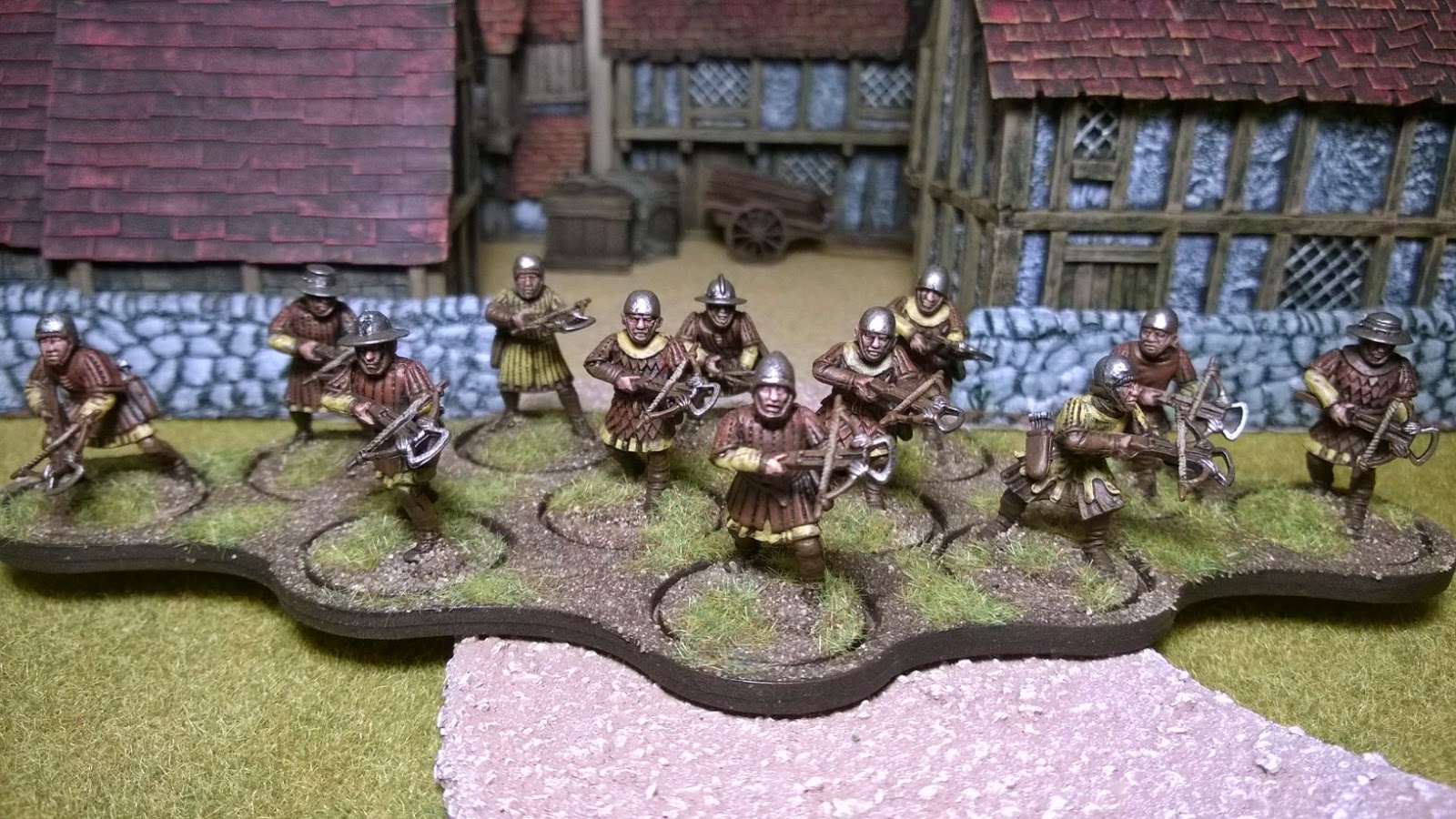 Lastly, we have my last (planned) unit of foot serjeants. Again I am really pleased with how these have gone together, with the shields really finishing them off. There is a real risk you'll be reading in this blog at some point in the future that I have bought another box of Fireforge's foot serjeants as this has been an absolutely gorgeous kit to paint, and I am now looking at a third unit of foot serjeants or maybe a unit of fierce foot . . . 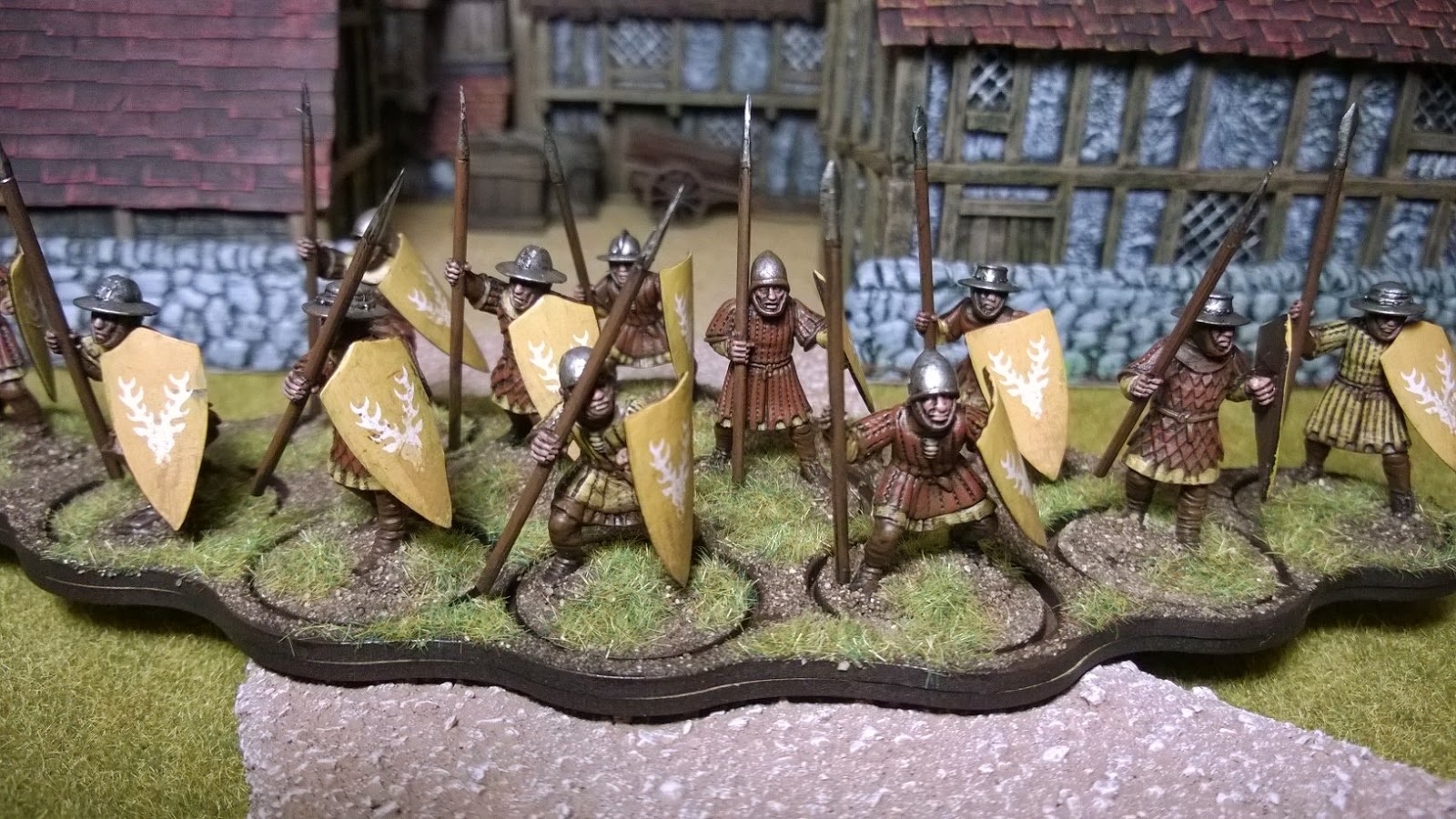 It all began with a simple email from a club mate. I've played a couple of games of this fairly new set of rules and I really think you will like it, do you fancy using your Saga army to give it a go? How can that be answered with anything but ok?
I think that's the exact moment it went wrong. Before I knew it I had played my first game and gone straight home and ordered a box of Fireforge foot serjeants, a single pack of Crusader Miniatures foot knights and a copy of Lion's Rampant, and I was ready to go. 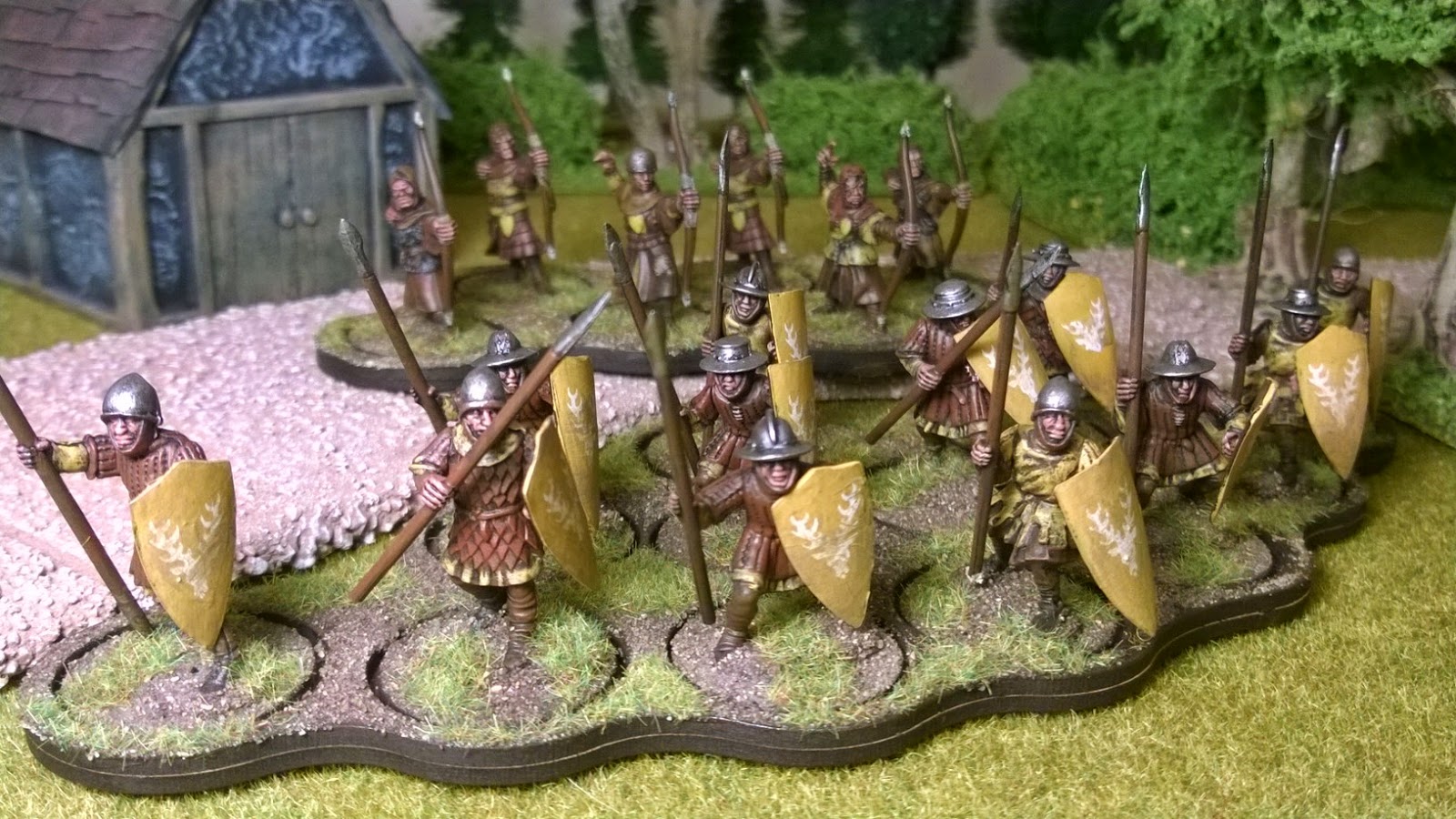 I picked a yellow livery with a white stag as my symbol, as a nod to House Baratheon from Game of Thrones. I thought I had better give myself a second chance at a game of throne army, as the more I look at my House Lannister force the more I don't like it at all. 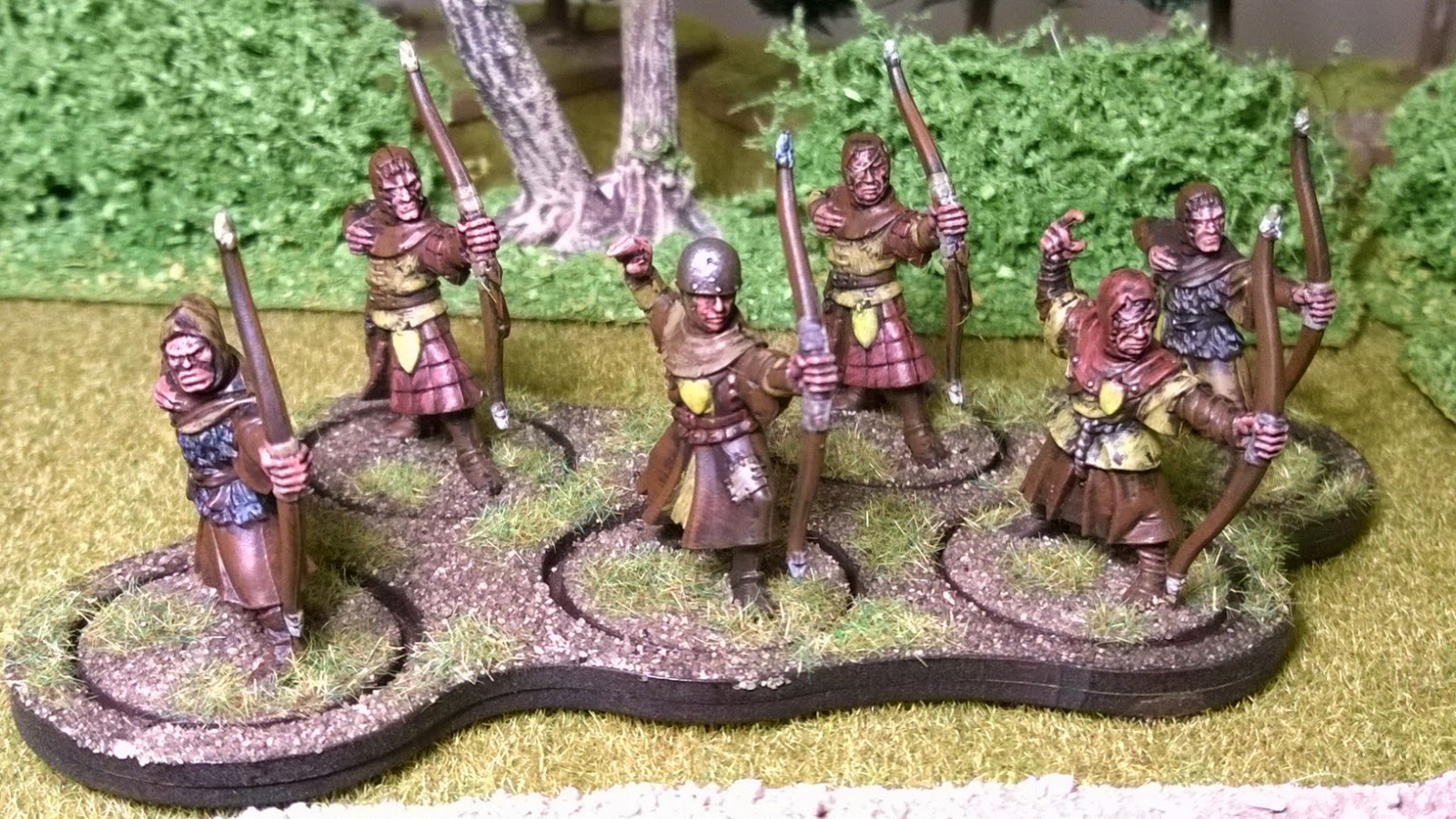 While packing to move I found half a box of GW bretonnian archers and during the wait for my new models to arrive I decided to dig that box out and use them to test out my colour scheme, but they have since been ungraded to full army members, fulfilling the role of Bidower as I am really quite pleased with them.

The first unit of foot serjeants. The stags on their shields are transfers from another GW bretonnian kit, this time the knights box, although I have had to buy a few more sheets from ebay. 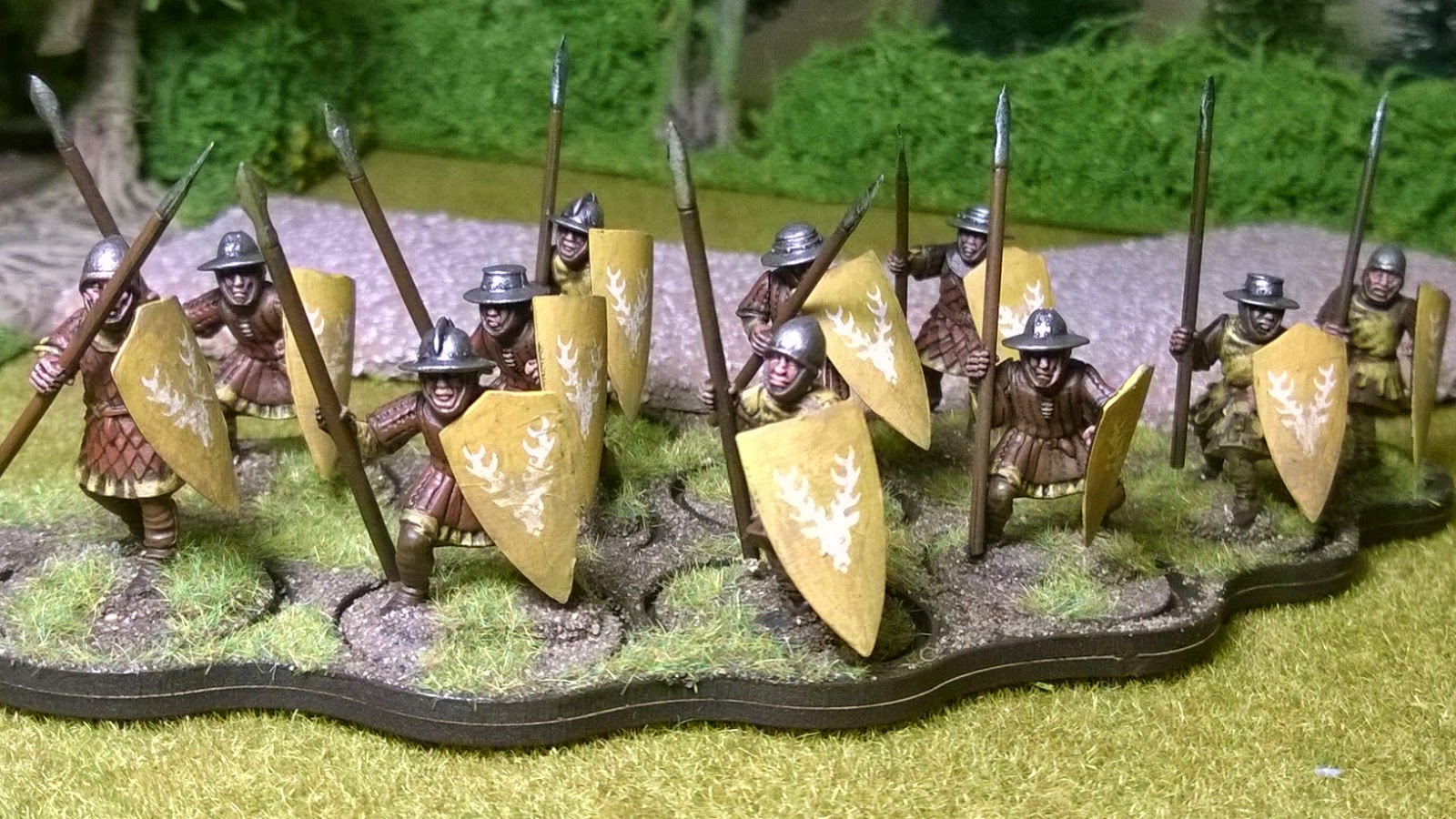 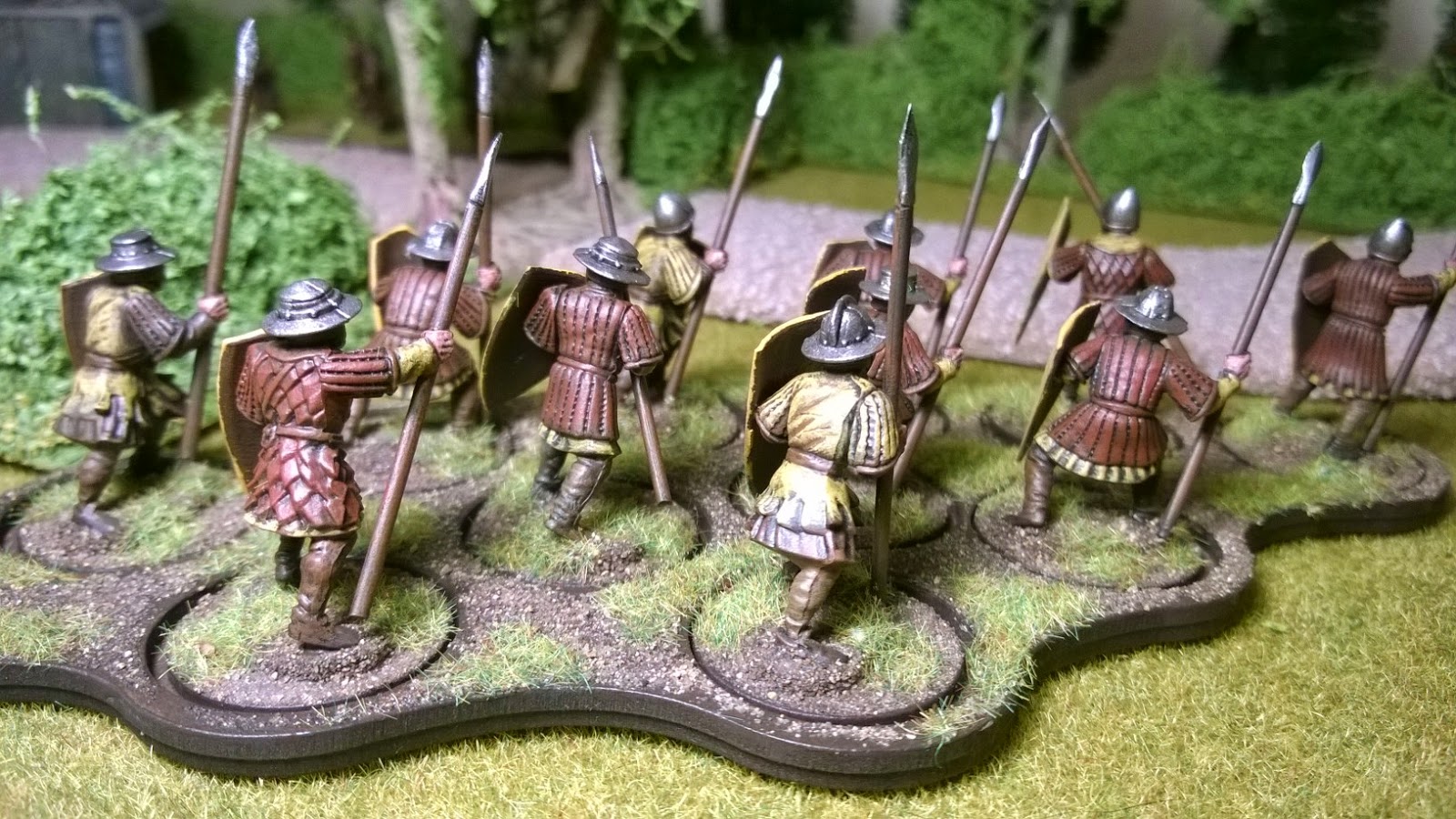 As the title, sort of, eludes to I have been painting zombies for my Open Combat game. In my vain attempt to keep to my resolution of painting more than I buy (I am failing miserably at the moment) the half painted unit of zombies that have been sitting on my desk since the start of January had to be finished, as they were a big part of why I am so very behind my target. The reason they had been on my desk for so long was because I had forgotten how terrible the GW zombie kit really is, I went into this part of the project full of nostalgia about this kit and it had blinded me to the stupidly sized hands and terrible shoulder joins that a few years on really annoy me.

But, the end result isn't too bad in my opinion. These guys, and the next 10 I have to do, are going to be pure horde material. Their stats will be so bad that the human party really shouldn't struggle to take them on one at a time, but I want their strength to be in bogging their opponents down until the skeletons can get in. 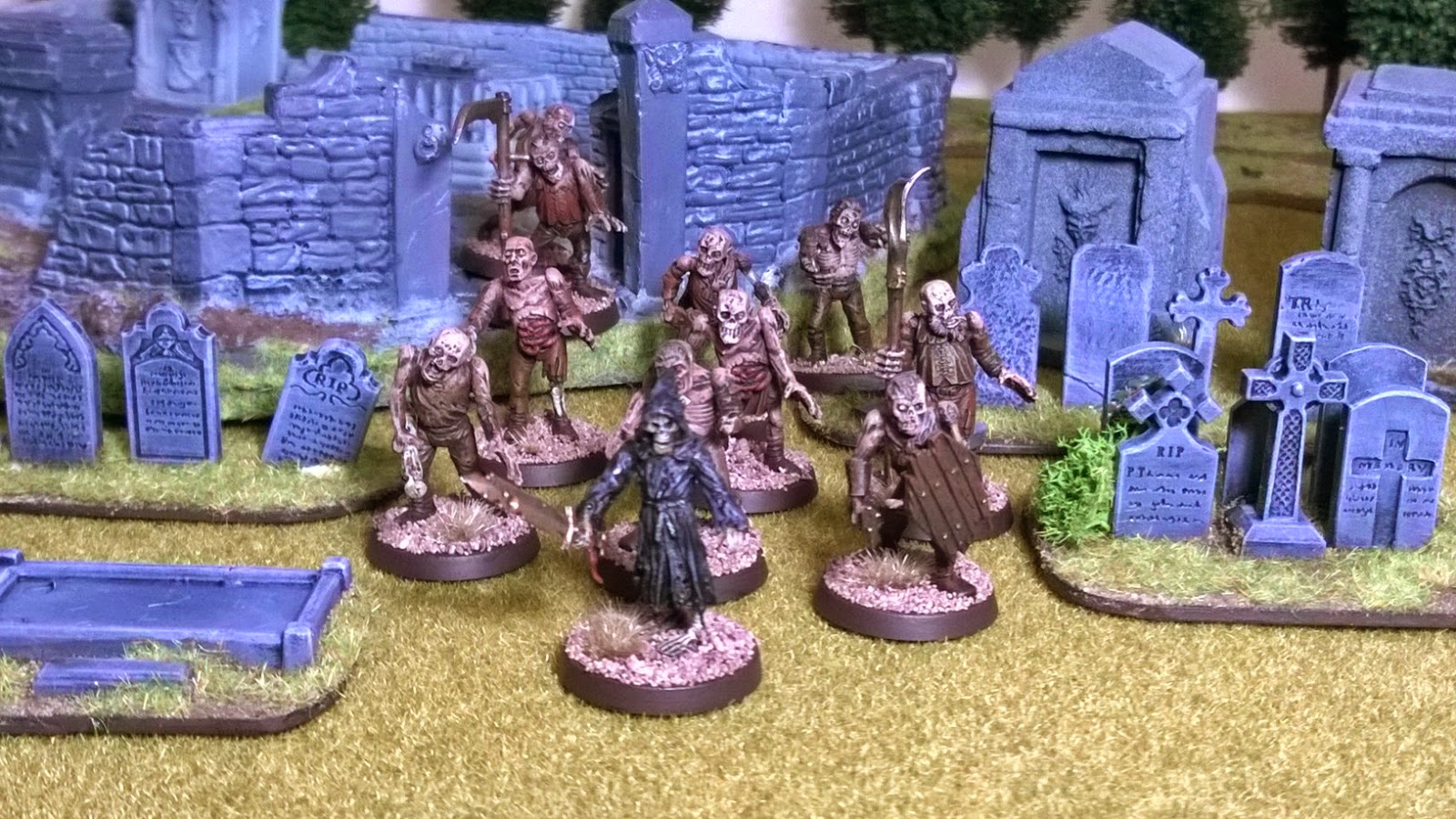 The figure at the front is still a bit of a mystery to me. It is a Otherworld miniatures figure, that has been given a left over skeleton sword to give him a chance in combat. I will give him half decent stats as he looks like he deserves it, but I still don't really know what, or who he is, on context to why he is part of this horde, other than the fact he is obviously undead. . . 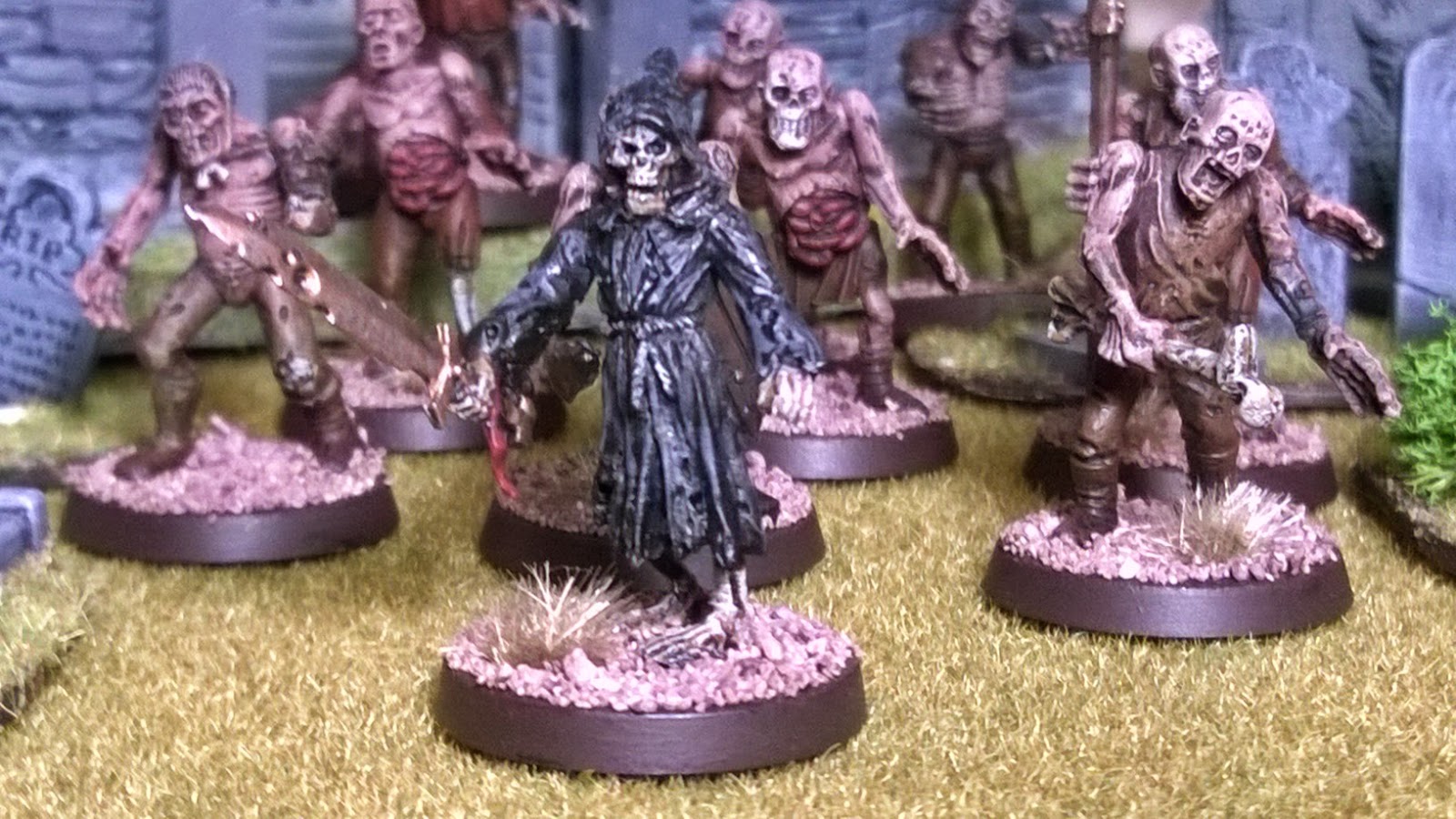 Lastly, for this post, I have completed my first batch of gravestones to add more scenery to the board when I put the game on properly. I have just over this amount of grave stones left to go, so I think it should bulk up quite nicely. I have mounted them on plasti-card bases in groups to stop keep the scenery a bit tidy, I have seen games put on with every stone on it's own base and it just gets a bit unwieldy to play on. 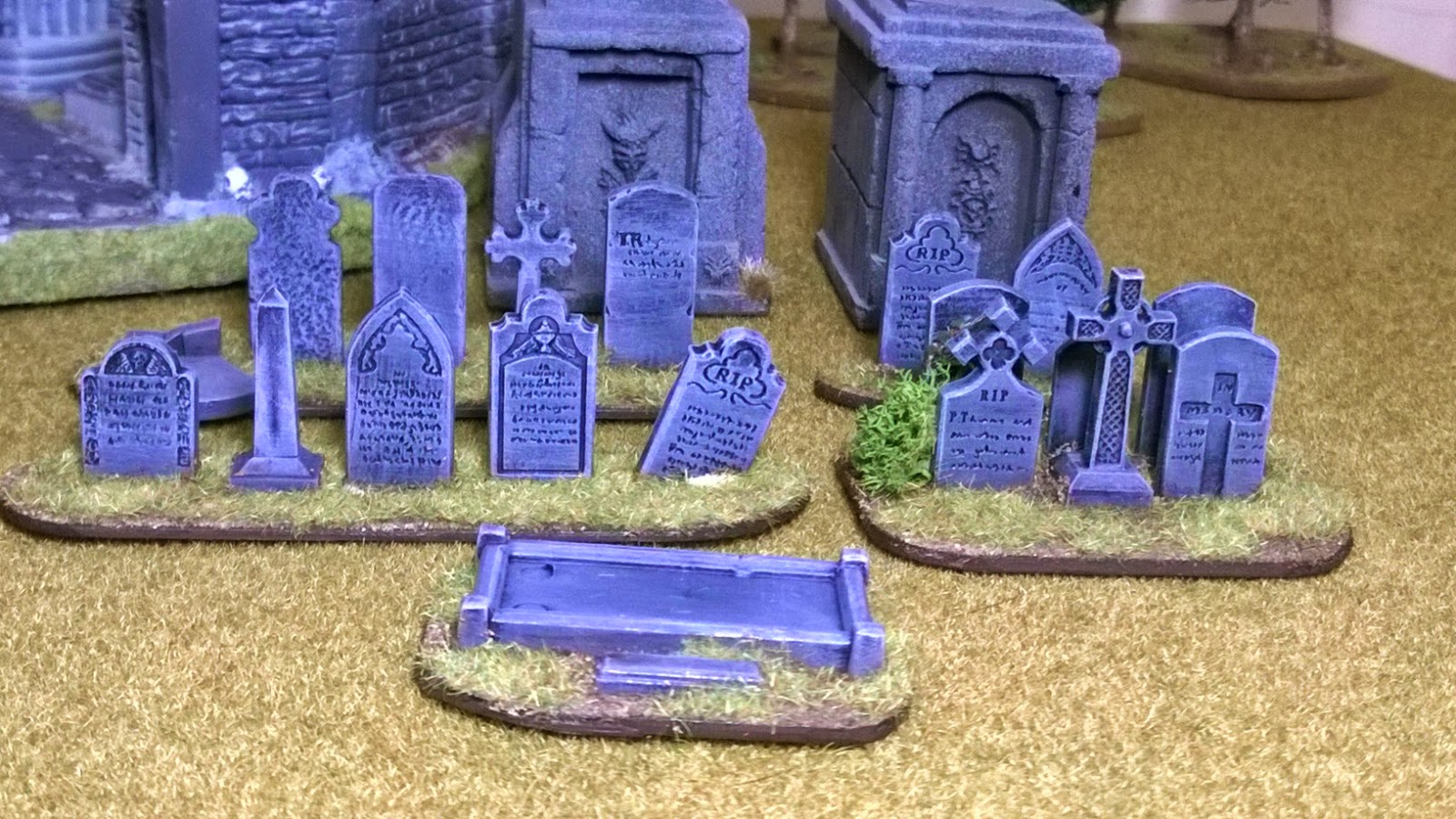 I have also got a few bits saved up for their own, out of sequence post in a couple of weeks time, plus an exciting new project that will get it's own run of posts fairly soon. So I have a lot to keep me going.