My rabbits (or one in particular and I know exactly which one) ate the laptop lead, so I've not been able to update the blog while I waited for a new power cable to arrive. Now, however, I am ready to go again.
Not a huge amount to report, but I did spend a good weekend evening painting a Sons of Horus tank - something I still think the top spas need to introduce into their relaxation programs. The tank in question is a legion vindicator but with the traditional demolisher cannon rather than the laser destroyers of it's sister tank. I've got a vague plan for this vehicle in the new year, so we will see how that works out. 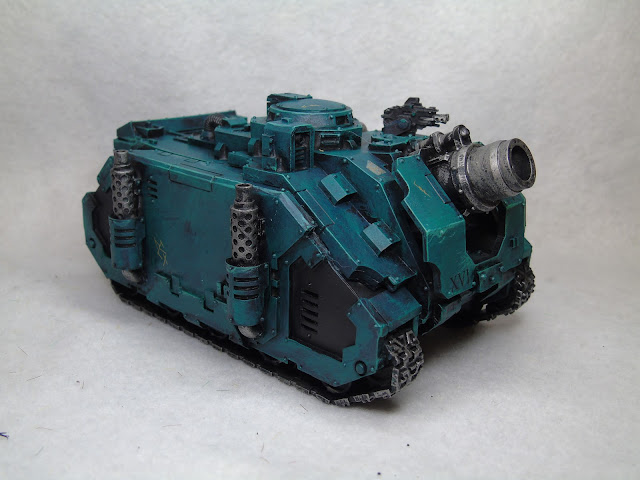 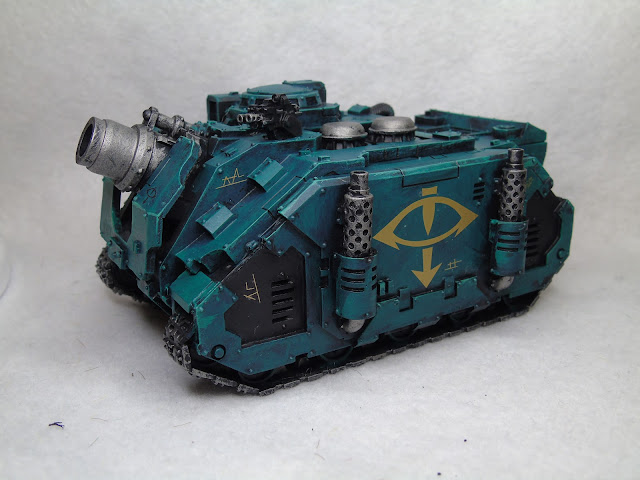 Then, just to prove I am incapable of committing to a single army, game or period I played another game of Sharp Practice 2 this week (not photo worthy) and tried out a few quick games of Saga 2 just to see what changes have been made to the rules.
There are going to be much better Saga 2 reviews out there and I am well behind the times, but suffice to say, if you enjoyed Saga, then the second edition is much better and does make you think harder in game. If you didn't like the way Saga worked (I know working out defence saves can be a serious headache), then the changes aren't going to sell this new edition to you. 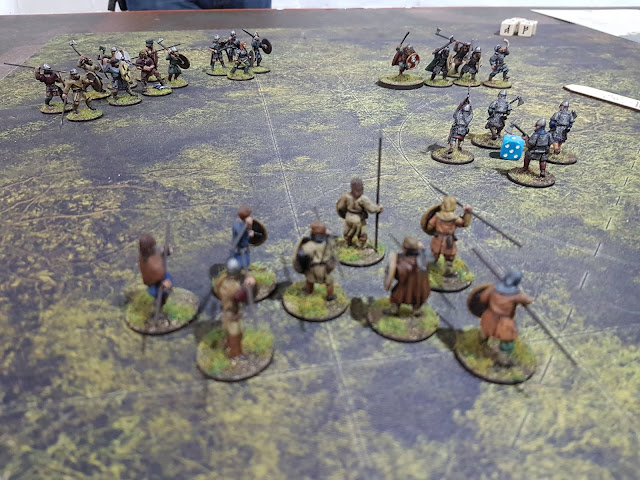 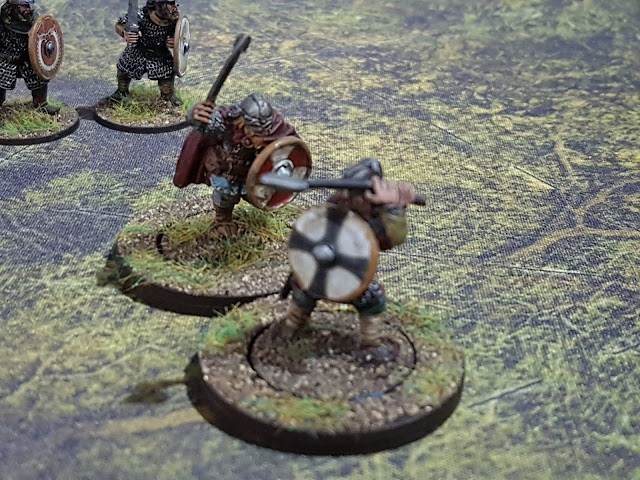 The other unit I finished at the weekend, was a second squad of tactical marines for my Ultramarines. As with my Sons of Horus, I am trying to get the bulk of the basic troops done first, before I start looking at the more interesting stuff, simply because I have a strong belief that basic infantry is where motivation goes to die. If you can get through the basic ranks, the project is a good one, if you can't, walk away.
Also, the other thing I want to try with my Ultramarines is smaller more flexible squads, maybe mounted in rhinos, rather than the big infantry squads I favour with my Sons of Horus just to try and make sure my armies play differently. 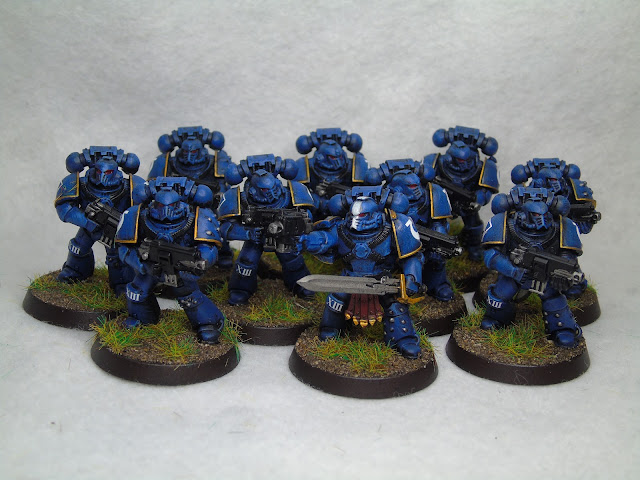 After, what ended up being, a whole weekend at home I managed to not only achieve some adulting but also got some models finished. I'm splitting them into genre relevant posts, so the first half is more Dark Ages figures.
I painted two batches of figures, with a mix of Saxons slingers, a Saxon fyrdsman, a Norse-Gael javelin thrower and a Norse-Gael hurscarl. Getting more Saga figures going across my desk is giving me a real urge to give the new edition of Saga rules a try in the near future*.
* Although I feel like I should up my batch size a bit to keep this moving 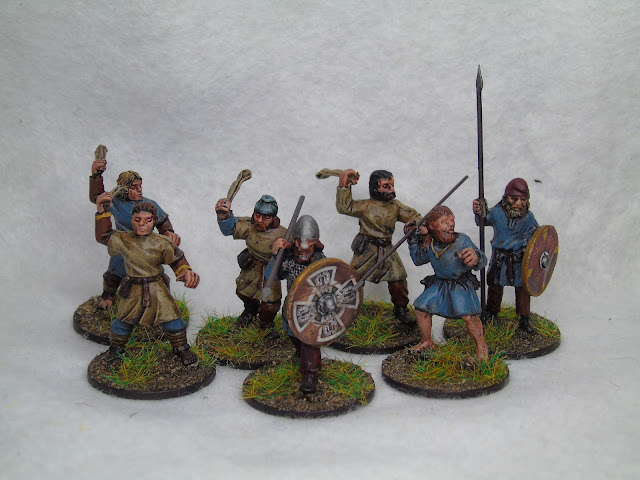 I promised this unit would be finished a couple of weeks ago, but my dread fear of painting Napoleonic’s ham strung me again, however, here we are, a lot quicker than I expected once I started to push them back down the queue.
As I think I mentioned in the last couple of Napoleonic posts, I had a sprue and a bit of Warlord Napoleonic British left over as one of the sprues had an infantryman who either hadn’t survived the casting process or the loving attention of Royal Mail’s employees. So part of my last Front Rank order was the second unit of 95th Rifles, another officer for both sides (I’ve seen how vital they are) and a couple of men to fill the gap in my ranks (ordered two by accident). 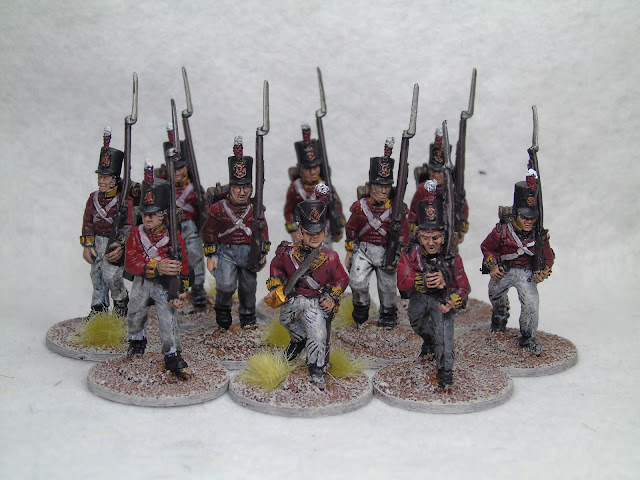 This now means I have a 5th infantry unit for my British and a spare officer., which means I can expand my games slightly, although I fear I’ll end up buying more French in the very near future. Or Black Powder 2 looks good . . .

Return to the Dark Ages

The drive home from the Jungles of Akkar event was both absolutely tiring and a confusion of hobby thoughts going through my head. I spent the drive thinking about how badly my Sons of Horus army played; so how to improve it or to just put it aside and get something else right, my next 30k project with Ultramarines, but also my various Dark Ages projects.
Why Dark Ages after a 30k event? Well, one of the players at the event was an author called Justin Hill, who wrote a couple of novels (Shieldwall and Viking Fire) based on the life of Earl Godwin, father of Harold Godwinson, that I read years ago and I managed to corner him in the pub for an hour or so to just chat Dark Ages. 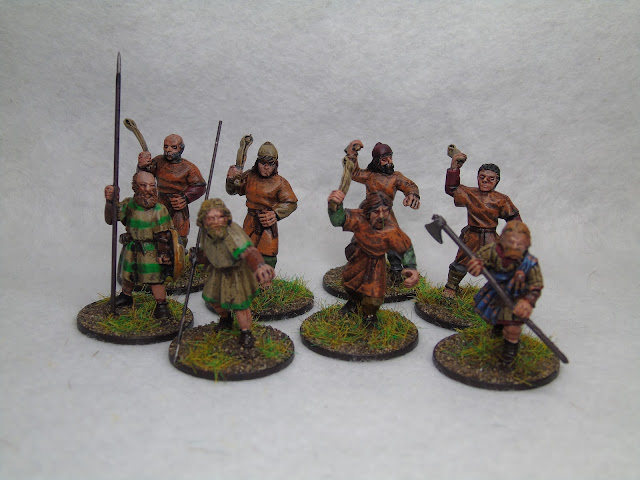 Over the summer North Star had a flash sale and one of the items they were selling off was a blister pack of Gripping Beast Anglo-Saxon slingers, for the price they were selling them, it seemed daft not to grab the last pack and while the plan was simply to put them into the Pile of Potential and come back to them, the fact they didn't seem to have any slings with them really did make them an another day project.
So, the day after the weekend event, I put together a Gripping Beast order to fill in some gaps across my Dark Ages projects (mostly to convert Saga sized units into Lion Rampant sized units, including some slings, and as soon as they arrived I got to work.

The slingers are being painted in the same method I used last time, painting a batch at a time in a single dominate colour, so when the unit comes together it doesn't look like it has been painted in a uniform. I plan to mix models from other projects into the next few batches to really get everything moving again. 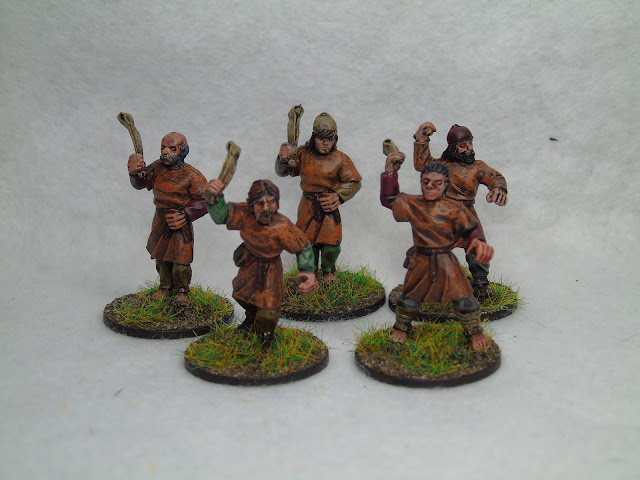 While the models below are from my Norse-Gael army and were really just me trying out ideas for the sheer hell of enjoying painting some models. I bought a single unit of the Gripping Beast Norse-Gaels to boost the model variety of my Viking army, before I got carried away and made a full army of each. The model on the right was my attempt to create a single striped tartan looking cloth (it looks much better in person), while the guy on the left was my attempt to copy a model that Michael painted in this post, but his is much better. 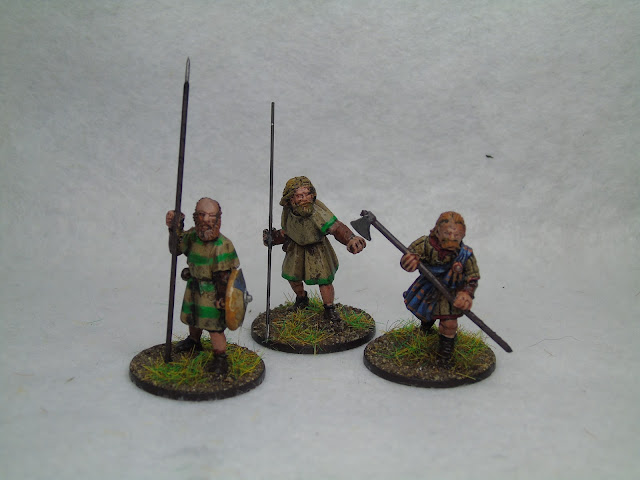 Of my hobby targets for this year, playing Warhammer 30k was the big one and it looks like it will be my big game of the year* by quite a margin and, while I have made sure that the other games I love haven't fallen by the wayside**, it is still my biggest focus.

So, with that in mind, I have spent the last few months trying to pick a loyalist legion to allow me to play both sides of the conflict depending what event organisers need or a particular game needs. The things I was keeping in mind while picking were the following; It had be to be a true loyalist legion - not a traitor legion splinter group, it had to do something different to my Sons of Horus - not just the same army in a different colour scheme, and it had to be interesting enough for me to want to build, paint and play them. With those, it *** ended up being the Ultramarines. 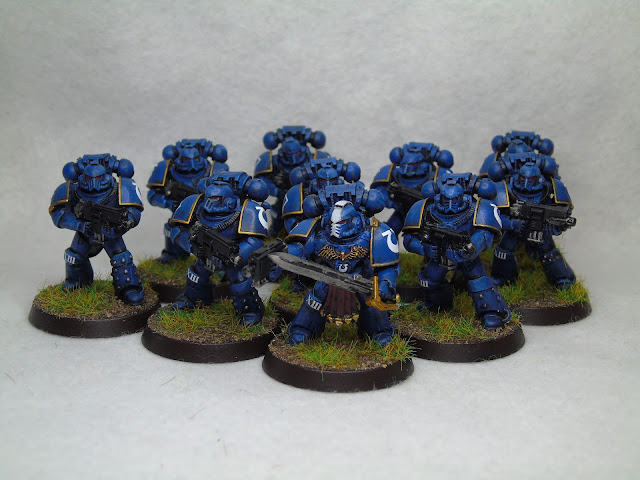 With enthusiam carrying me on, I've got the first squad of tactical marines finished, and really enjoyed the process. I've tried to make them look as different to my Sons of Horus as I can, no crested helmet for my sgt and a power sword instead of a bolter for him.

I've got other stuff on my painting desk that I need to try and focus on before I get too carried away with this project, but we'll see how that goes over the next few days - I've already got ideas of making this a 500 worlds project and not a soley Ultramarine one . . .