In the build up to Salute, at the end of next month, I am desperately trying to clear all of those half finished models and projects off of my painting desk ready for the new influx of unplanned purchases, and I am really sorry to say that this means my blog will go right back to having the attention span of a mayfly that I tried to steer away from. On the other hand, some of my better ideas and modelling projects have been single miniatures or so half baked they will never form a whole army, even using Open Combat, and as long as we go into this month knowing what we are getting into, I think it can be enjoyable for all of us.

The first model from this glut of painting is my VBCW Albertine Sopwith Camel and it's pilot. It's a model I doubt will get used in any real way other than as an objective or as scenery, but I honestly don't care. The pilot is from North Star, while the plane is from Eduard and is a proper modeller's kit, and really showed me how spoilt wargamer's are with the ease our kits go together. I have kept the colour scheme as neutral as possible, partly to keep it usable in anything WW1 where it is appropriate and partly because I wasn't brave enough to paint any of it purple, which has become the colour I am using to tie together my Albertine elements. 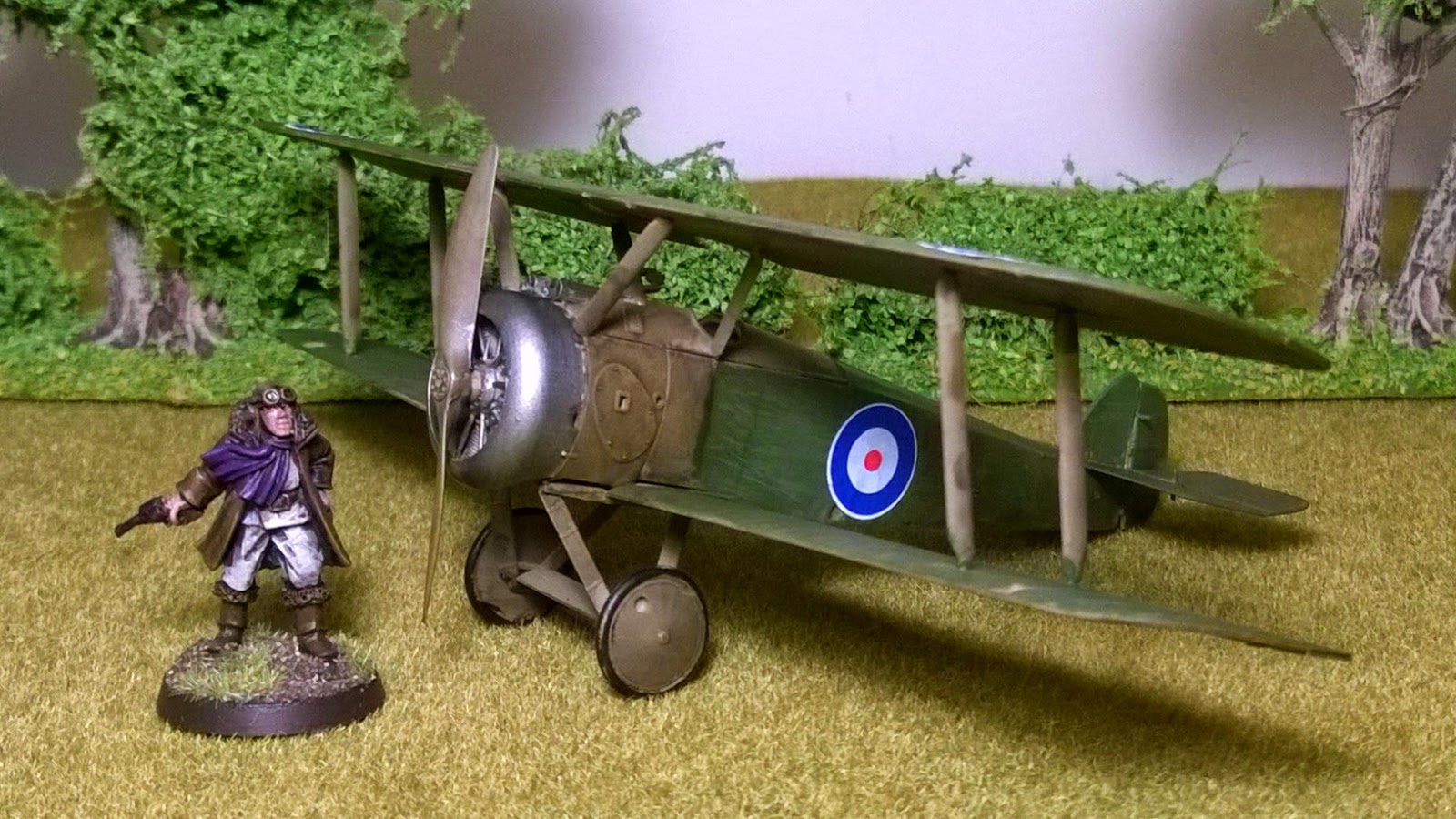 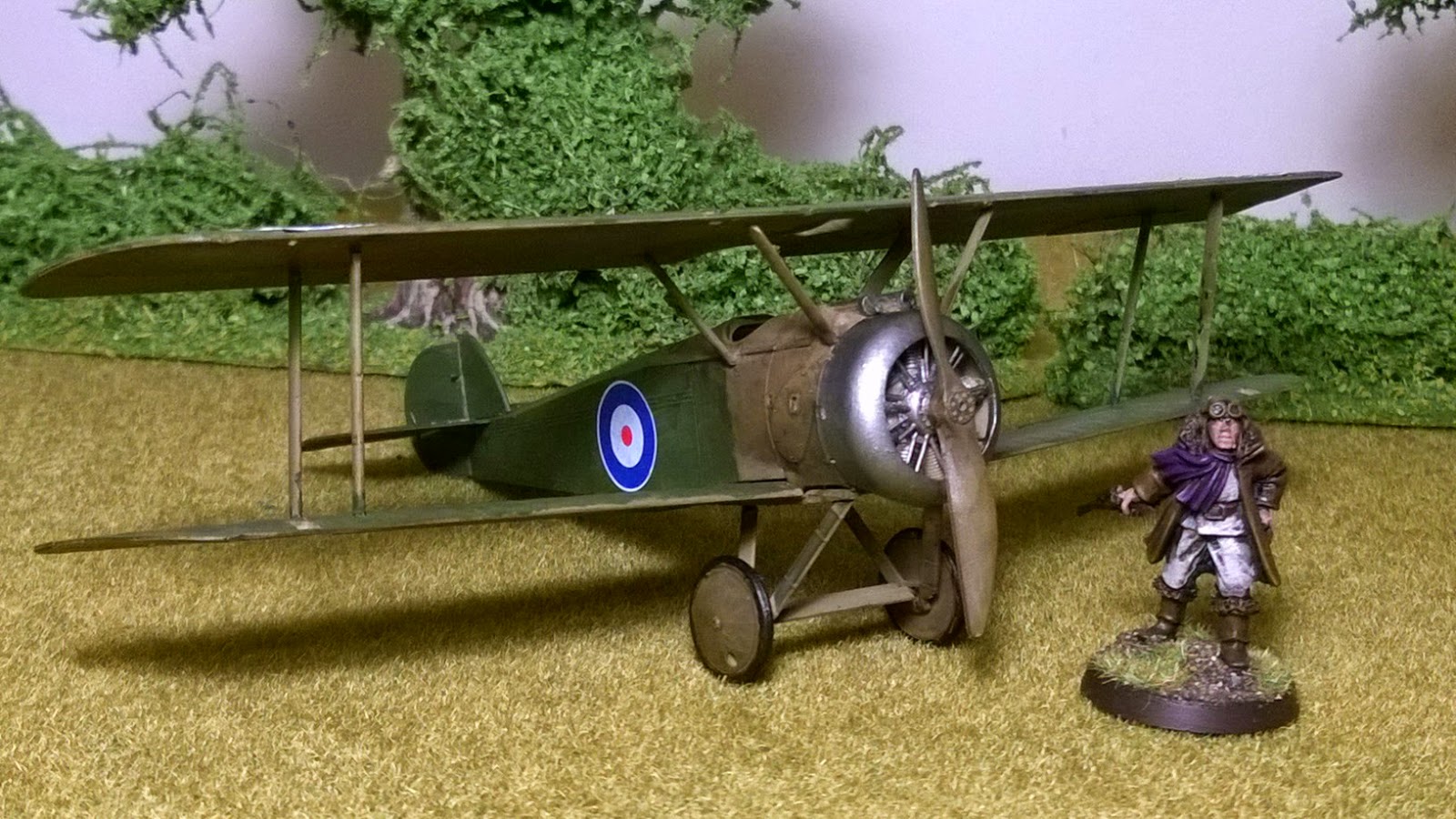 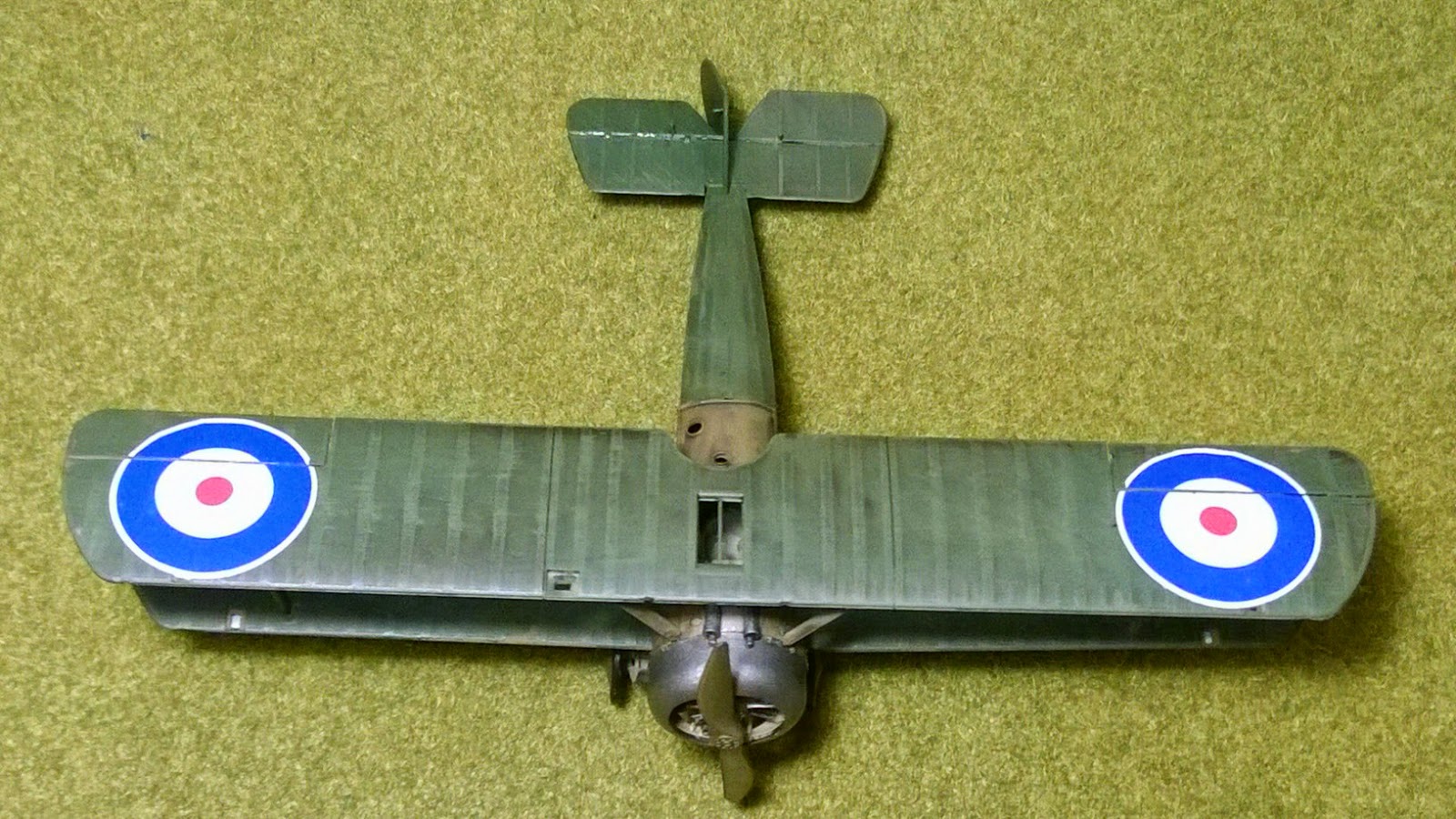 Then while I was shooting the pictures of the Sopwith Camel, I got a bit carried away again and decided to shoot the 'armoured' convoy on the way to the airport (read as convenient field). 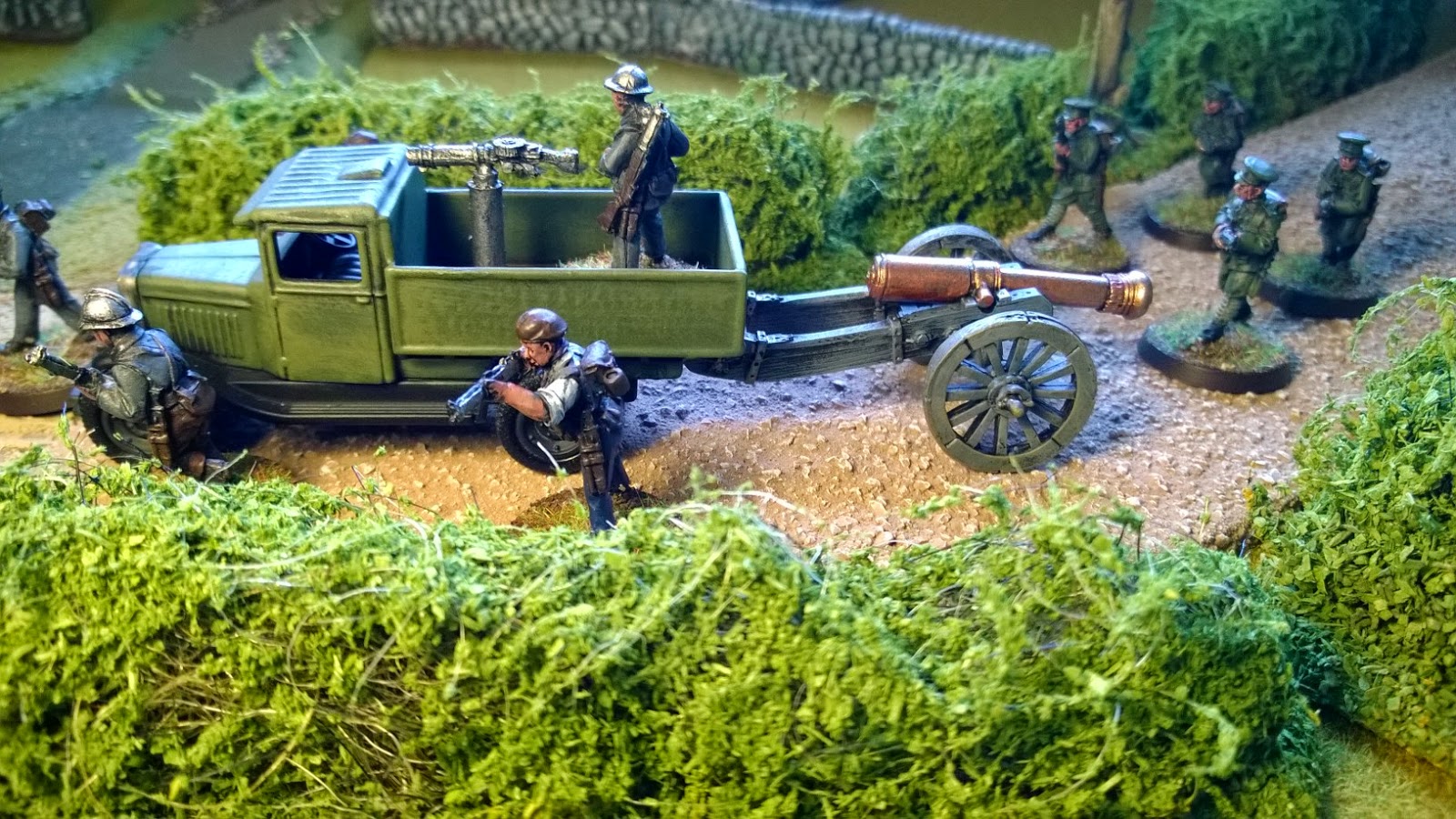 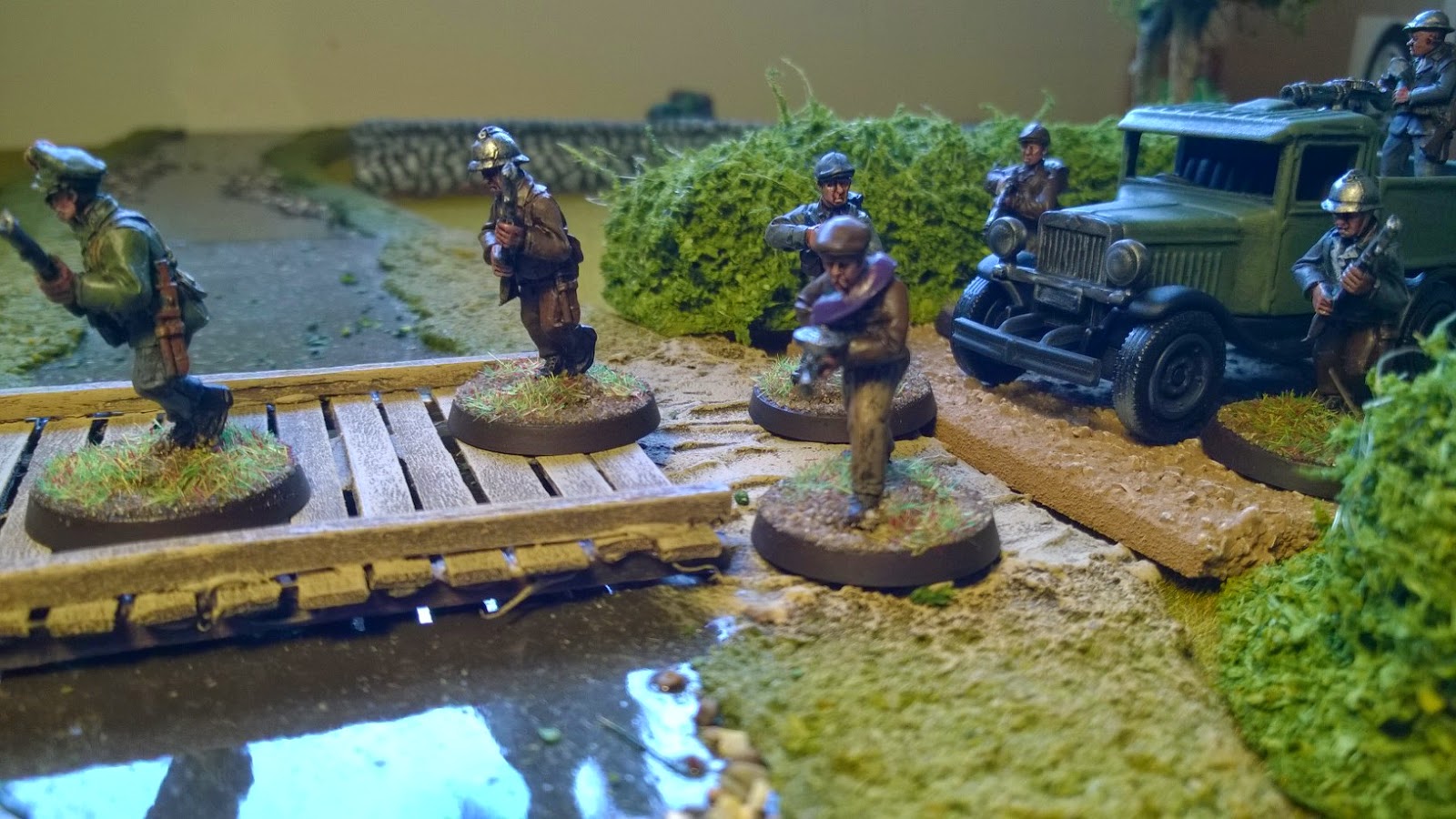 I really do need to paint up some more of my VBCW models and organise a game at some point, this project really has suffered from being overtaken by other ideas that have ended up with a higher priority, and considering it was the project I started with on this blog, I need to nurture it a bit more.

Look at the trees, they're moving!

This post is going to be yet more proof that I should stay away from all other hobbyists and never utter a single word online about the hobby, because yet again, a conversion with a gaming mate has lead me down the slippery slope of yet more projects, and yeah, this time I think it could be multiple projects.
Back last August when I had a game of Lord of the Rings with my old regular opponent (Matt), I said something about LotR being one of my old favourite games, and this got us thinking.Why had we fallen out of the habit of organising games? I know the answer is going to be real life and priorities, but still, there is nearly always a way to organise something, even semi-regularly. So a mere 6 months later we had another couple of games, that I forgot to take photos of, and we started planning.
I think part of the turn off with the game that we were having, is even though the random scenarios are some of the best and most varied of any other game system, when both players armies are variations of the same theme every time, games are going to get a bit stale. I was always solid blocks of Uruk Hai, Matt was always a mix of Rohan, with the occasional Minas Tirith mixed in. So first plan, new armies.
Second plan though is probably my favourite; Story scenarios from the back of the books. First up will be 'The last march of the Ents'. 500 points of Isengard forces vs 3 Ents and Treebeard. As we only had the one Ent between us and that belonged to Matt, it meant we had to do some serious ebay scouring, and I have to say I am really pleased with the result. 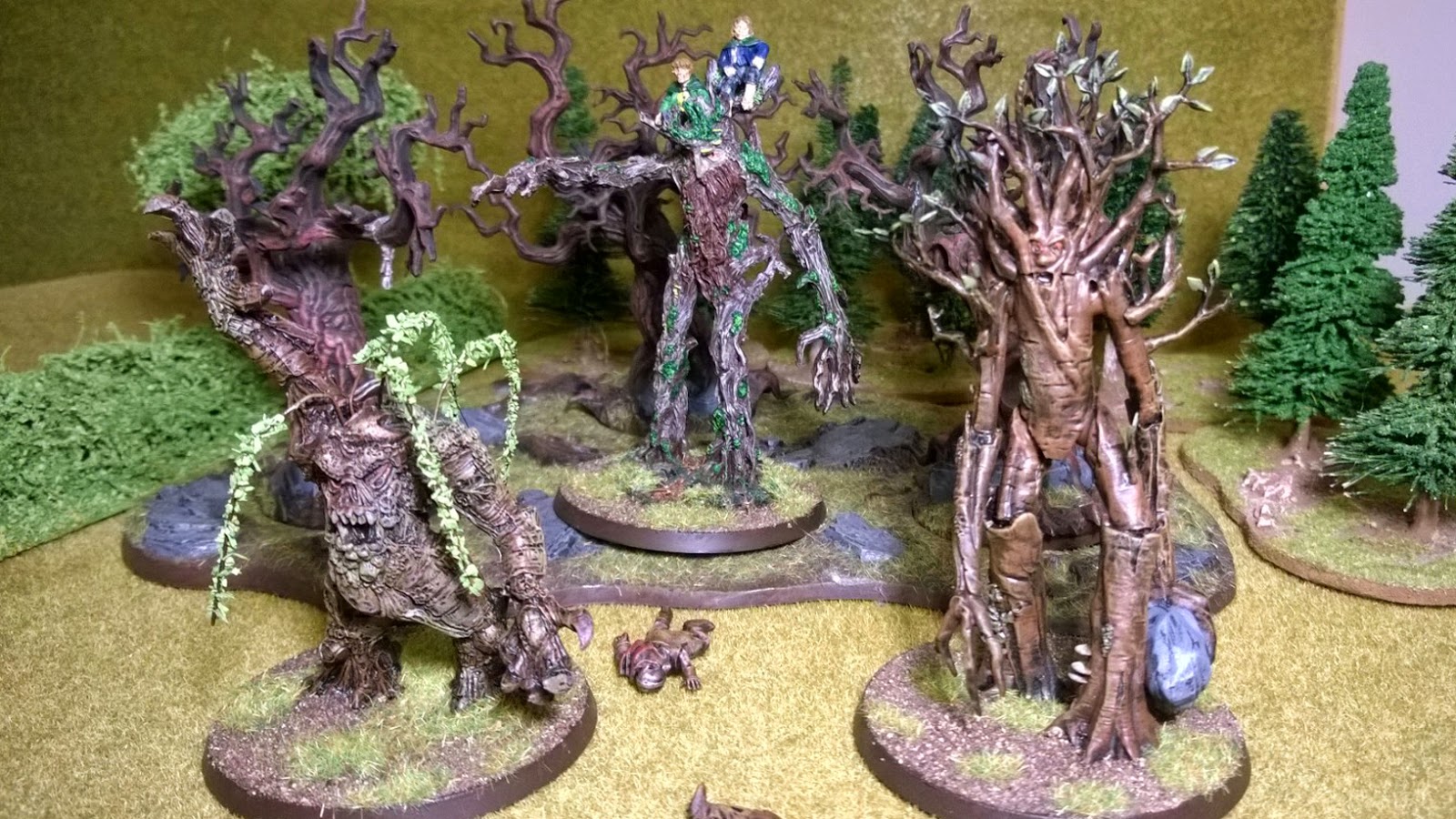 The 3 new additions to our Ent army(?), an old metal GW Treebeard, a current plastic GW Ent and a long out of production Warhammer fantasy Treeman. 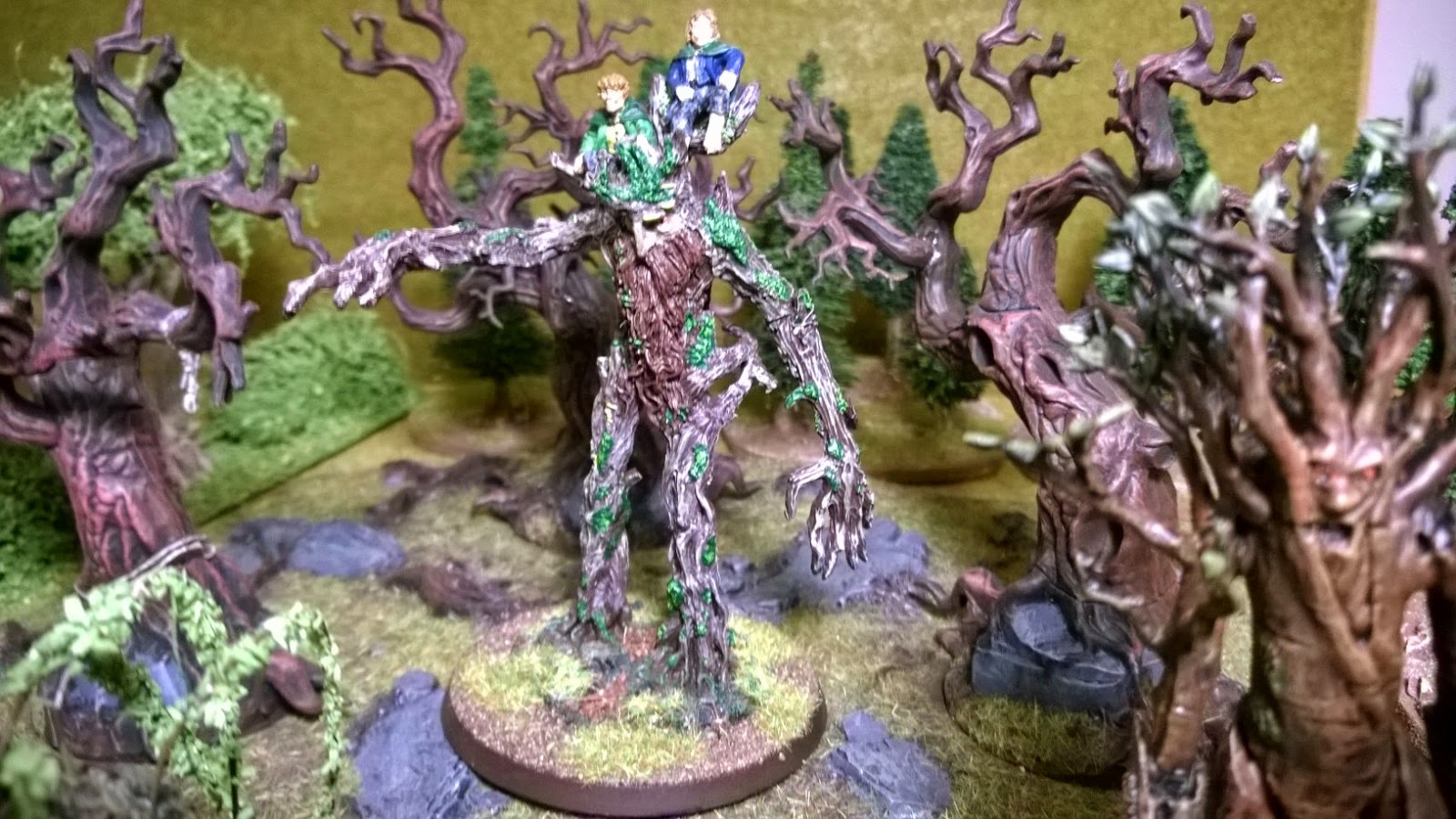 First up has to be Treebeard. This was an ebay find and one of my better ones, a really nicely painted Treebeard for about a third of the price of a new one in GW, and all I had to do was re-base it so it matches the rest of my models. 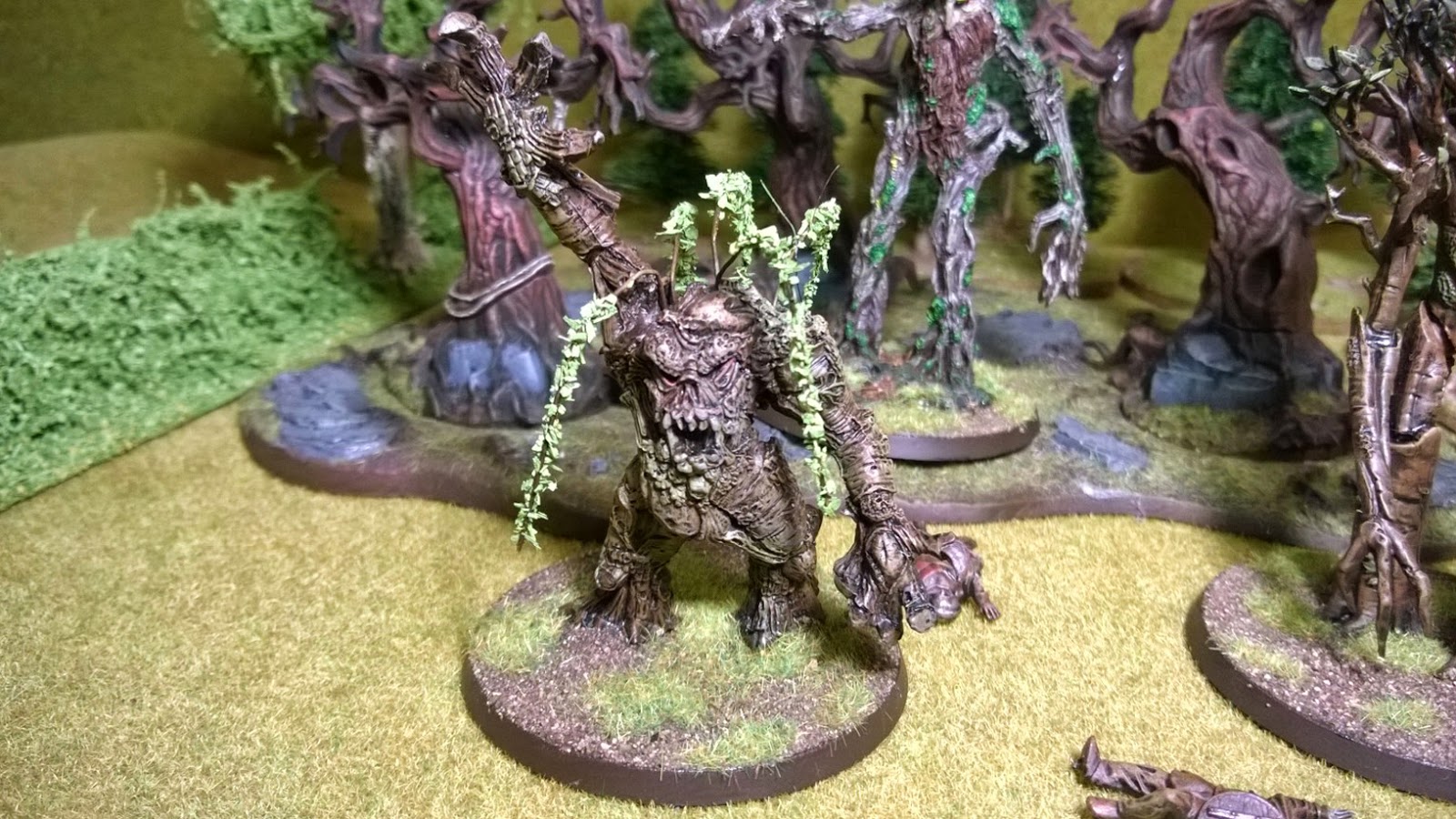 Second is the old warhammer fantasy treeman, who I have tried to make it look like a willow tree ent. The willow tree branches are wire, stuck into holes drilled in the top of the body, and covered in the flock that I saved from the box my order of scenery from the Last Valley came in, so that he matches some of my scenery collection. 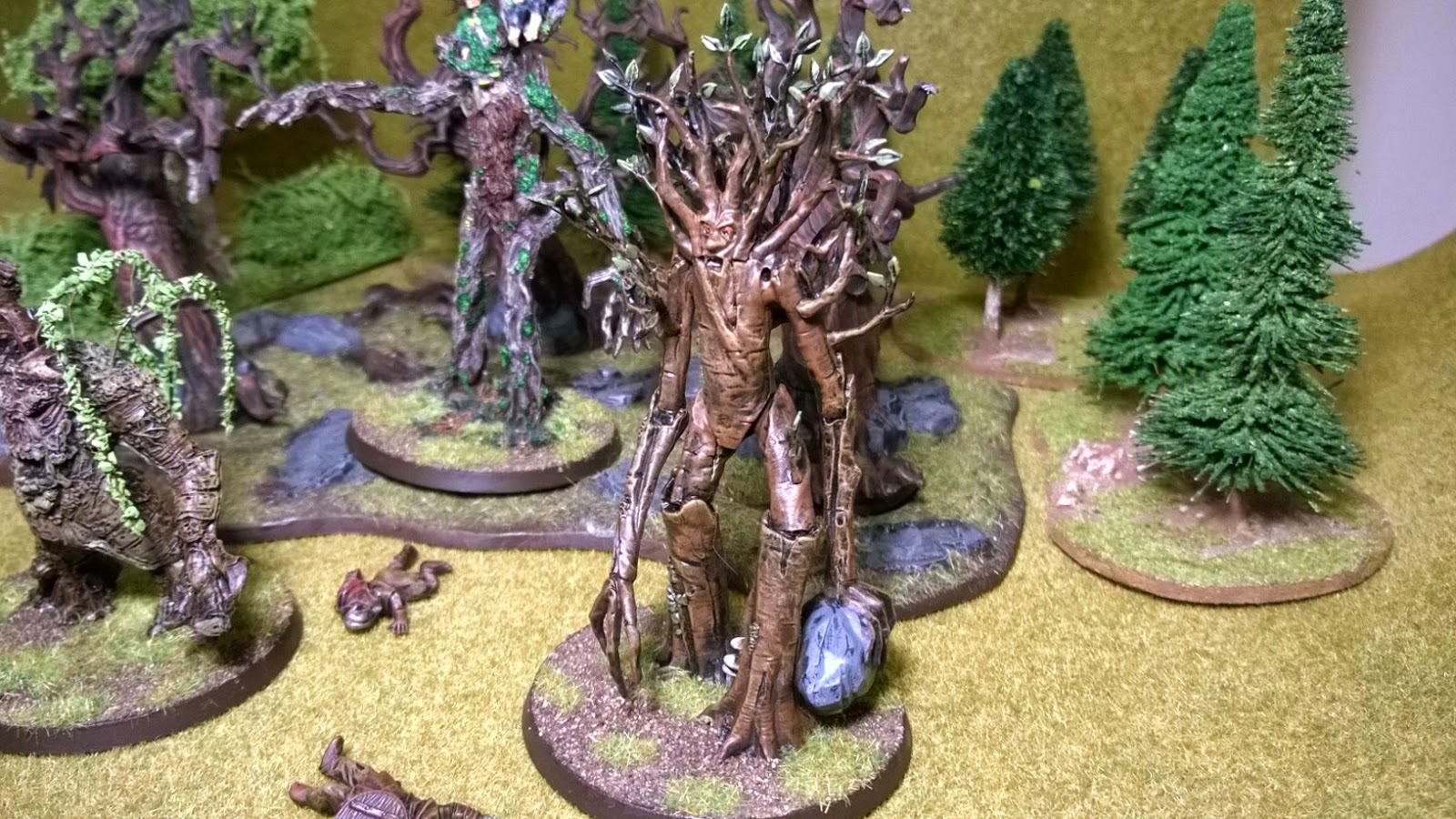 Lastly is the current GW plastic ent kit, who hasn't escaped a bit of conversion either. As I orginally thought the 3 normal ents were all going to be based on the same kit I wanted my first to look different, so I cut down his thighs so that he stands slightly shorter than normal to give a bit of height variation, then I cut every single branch off of the spare limbs and stuck them around the body to make him look much bushier than the normal kit.

Finished up and on the table

It's not very often I get to do a blog title quite like this one, but here it is, a project finished and on the table. A 24 point Lion's Rampant force, that is a mix of historical crusaders and Game of Throne House Baratheon, depending on my opponent. 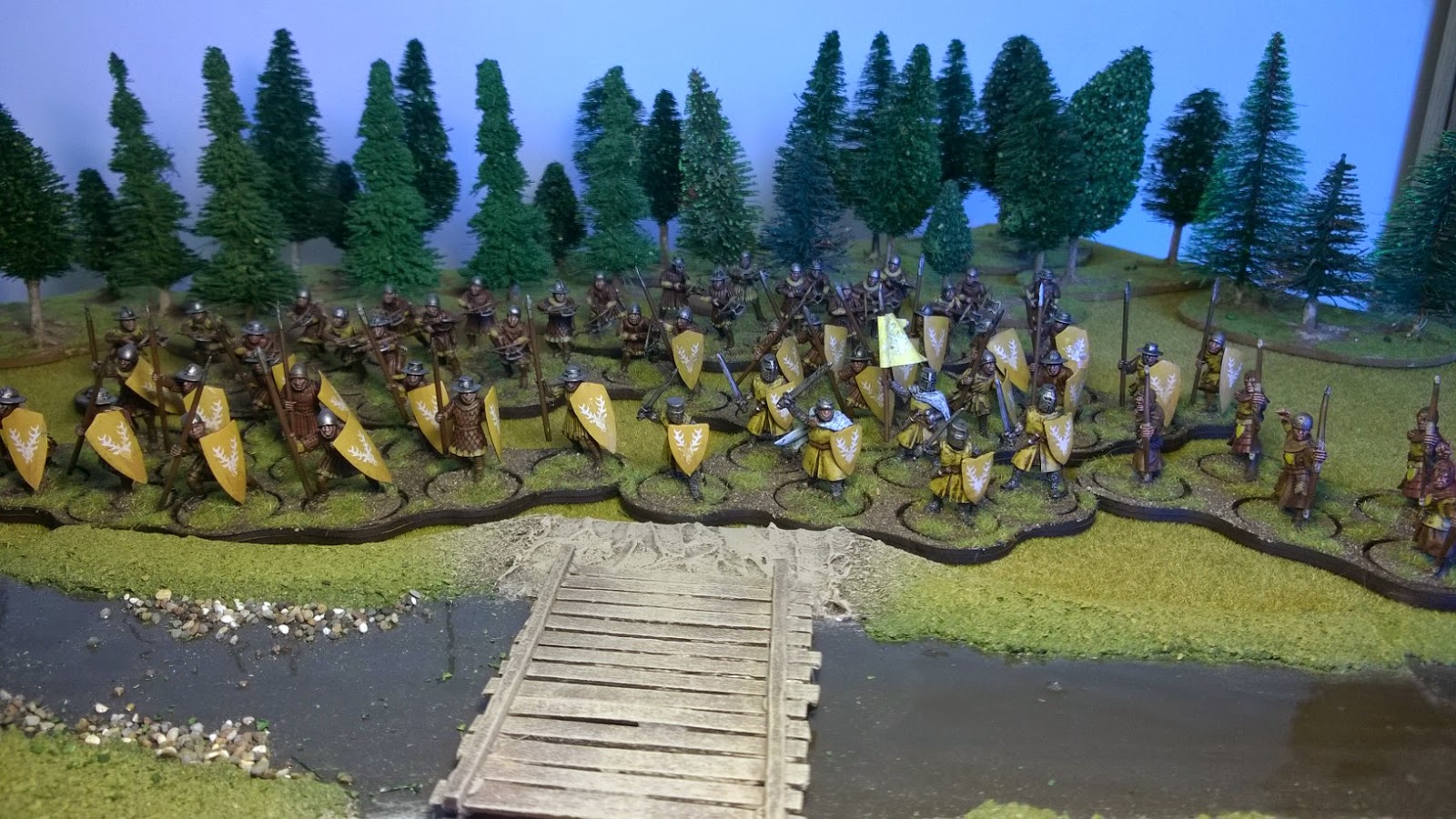 All I was missing at the end of the last post was a single unit of crossbowmen, who were right on the verge of being finished, and here they are; 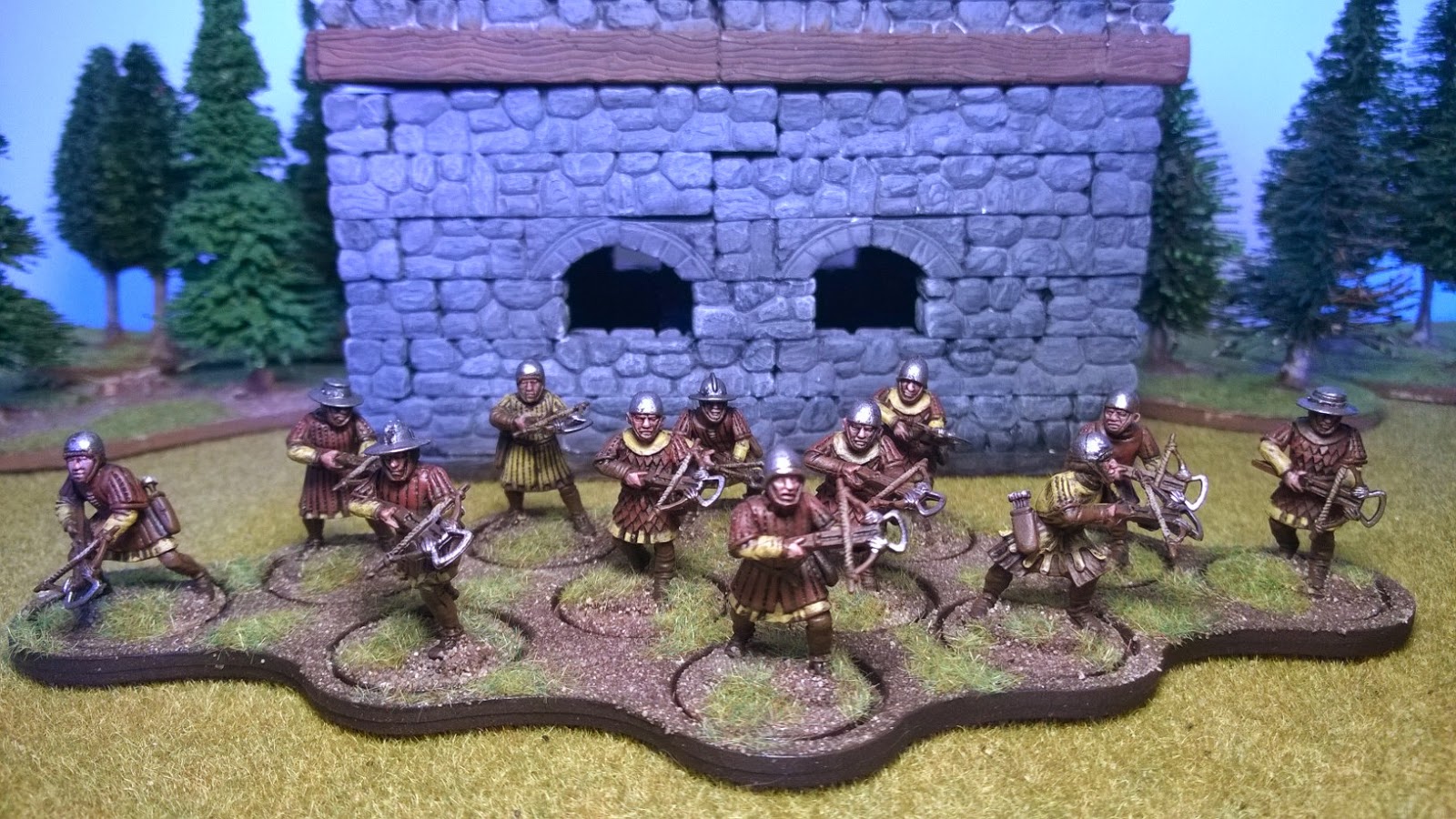 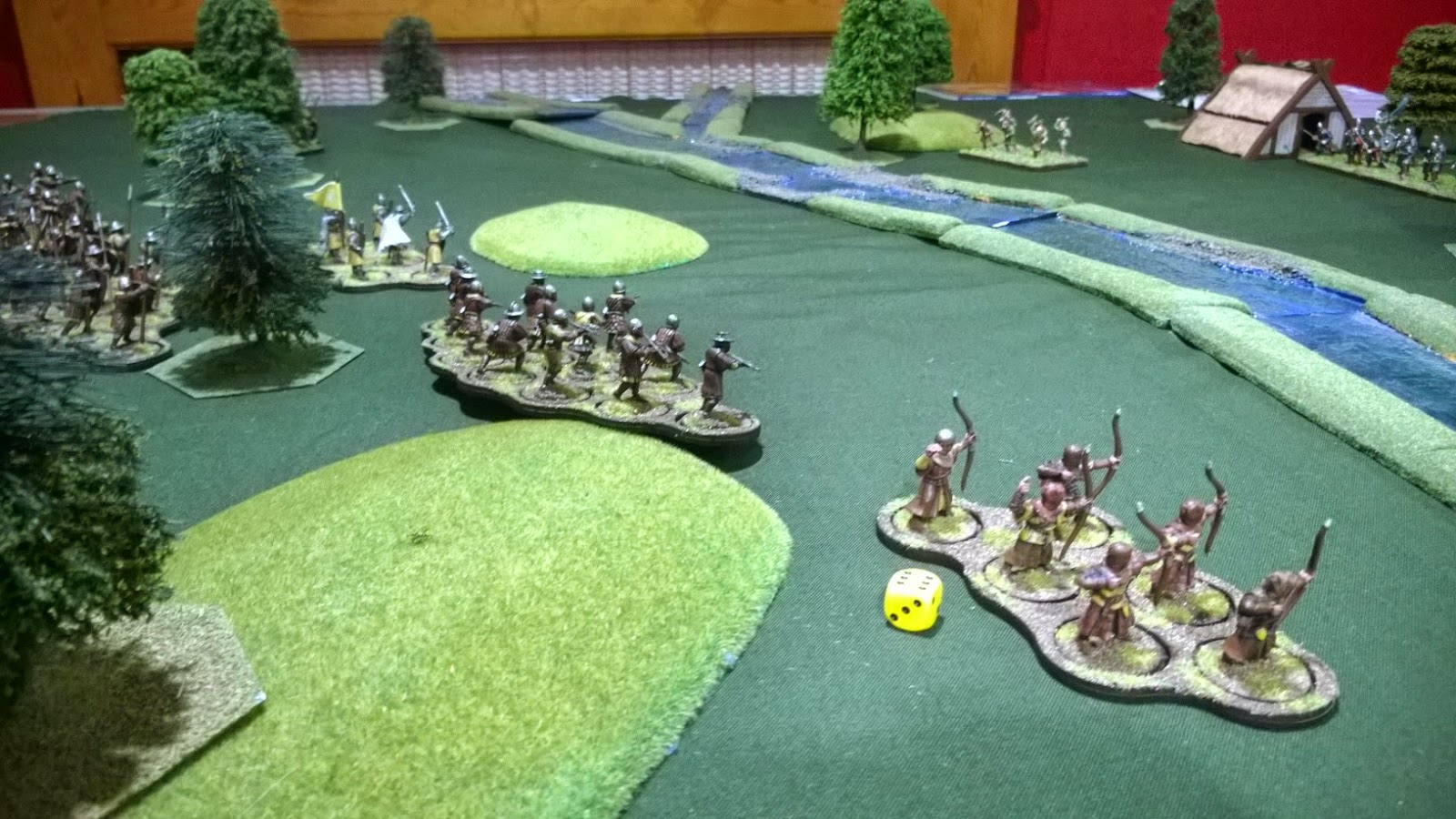 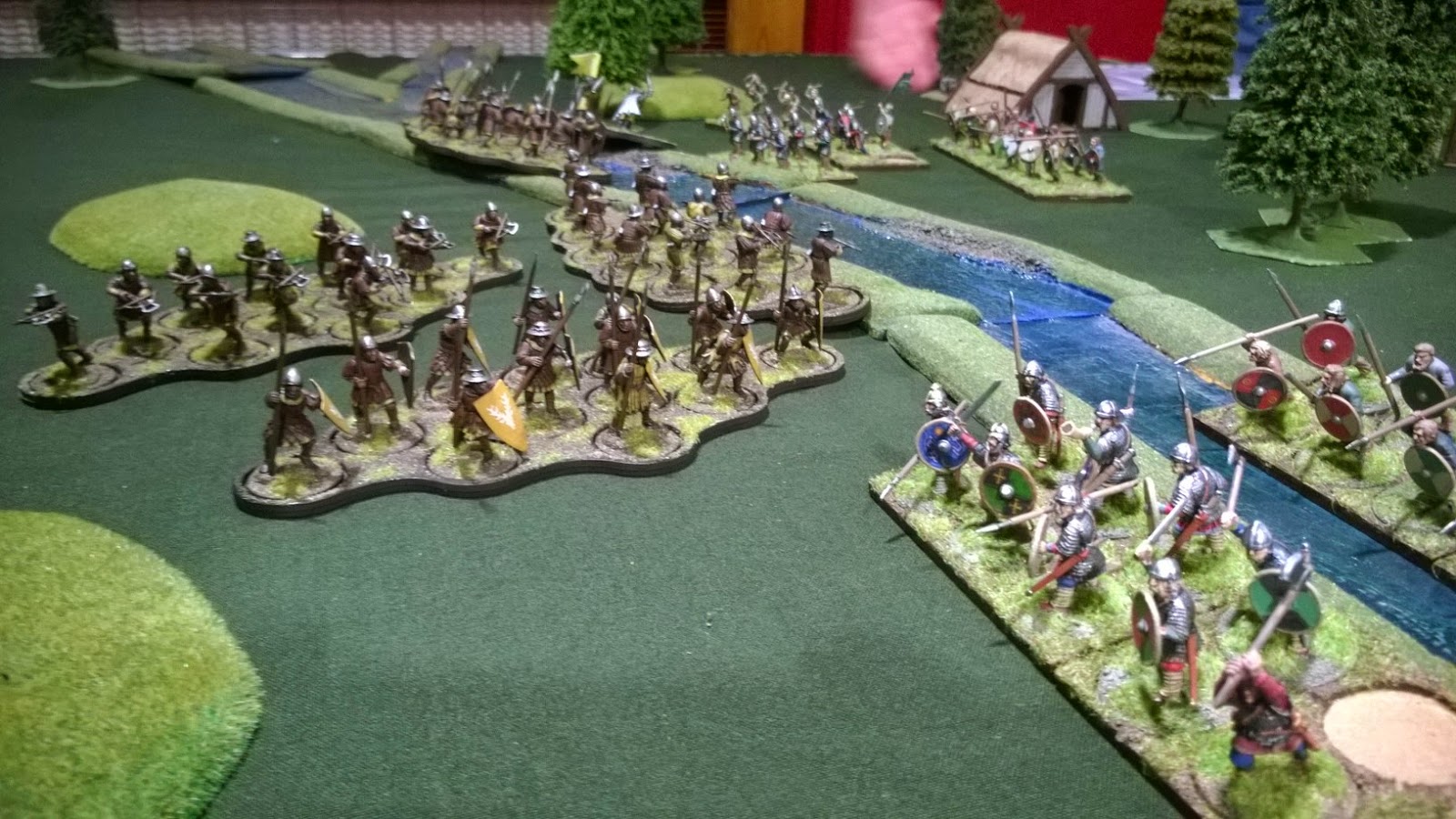 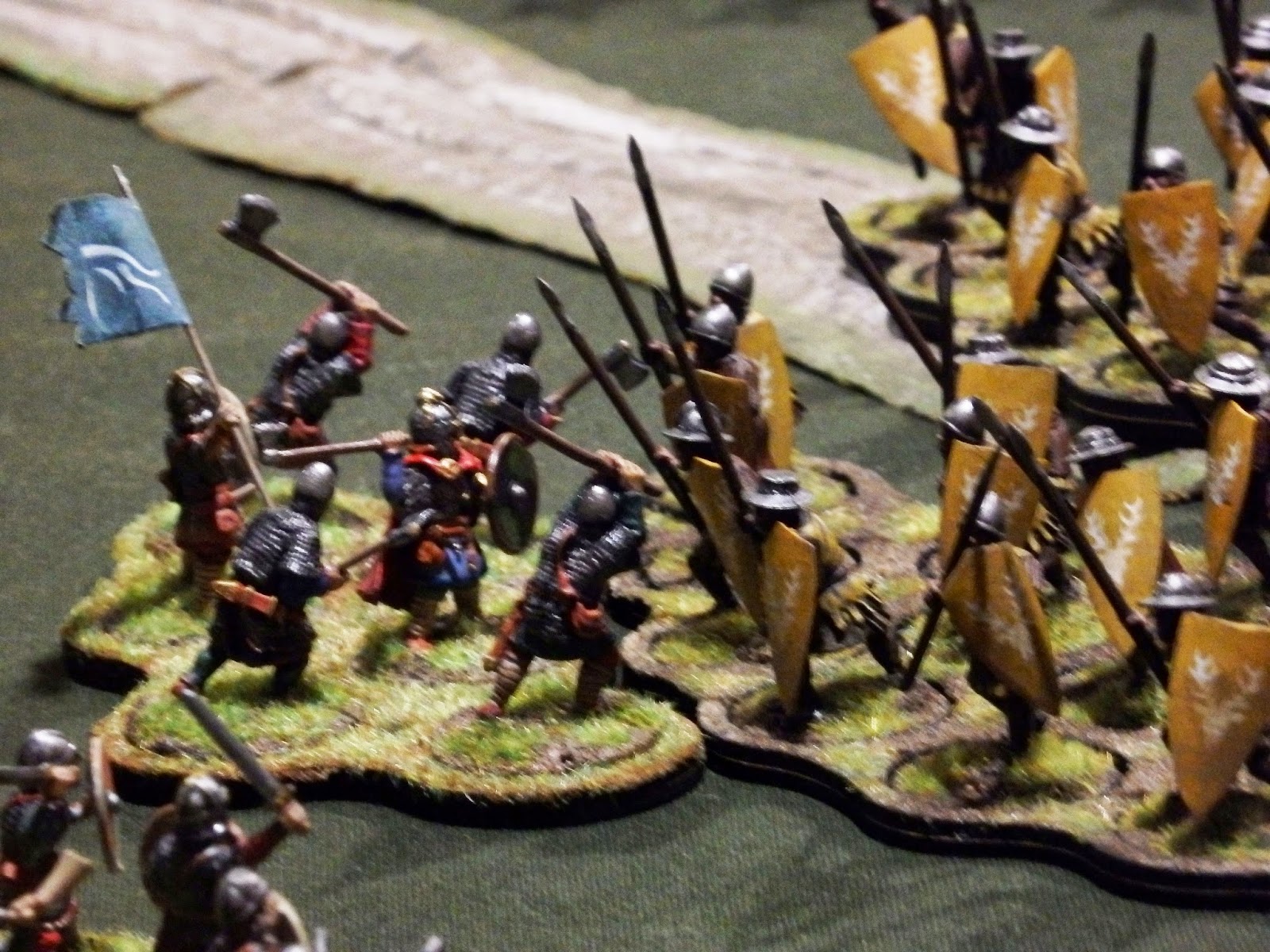 This last image is from a different game, about two weeks later, but I felt it deserved to be on this post, just a nice image of the battle lines clashing.

Next up I am looking at another unit of foot men at arms or a unit or two of mounted foot serjeants. Does this mean this project isn't actually finished yet?

I've been talking about running a RPG style game using the Open Combat rules for a couple of months now, and with the Kickstarter for a physical copy of the rules currently on the go, it seemed like a good time to organise a test of the actual game I want to run.

So here it is; the 5 plucky adventurers, tasked with taking out the necromancer who has taken up shop in a cemetery.
As I have mentioned in older posts I have adapted the rules ever so slightly to include magic, but I have simply used a existing mechanic and used it for my purposes, in this case both the priest and necromancers count as having bows, but the priest's is used to heal, while the necromancer's is used to raise the dead. In both cases they 'shoot' normally, then have to get a result that would normally wound, so the priest has to roll a 'wound' on a fellow party member to heal a wound, while the necromancer has to 'wound' what ever he plans to raise, because of this it is a lot easier to raise the dead than it is to heal.
Unless anyone is particularly interested I won't write the actual stats I used on this blog, as that isn't the point of Open Combat but the one thing I will mention is that I gave the human adventurers much better stats and gave them all second wounds to give the healing a chance. I wanted the undead to be a threat in terms of numbers rather than raw power. 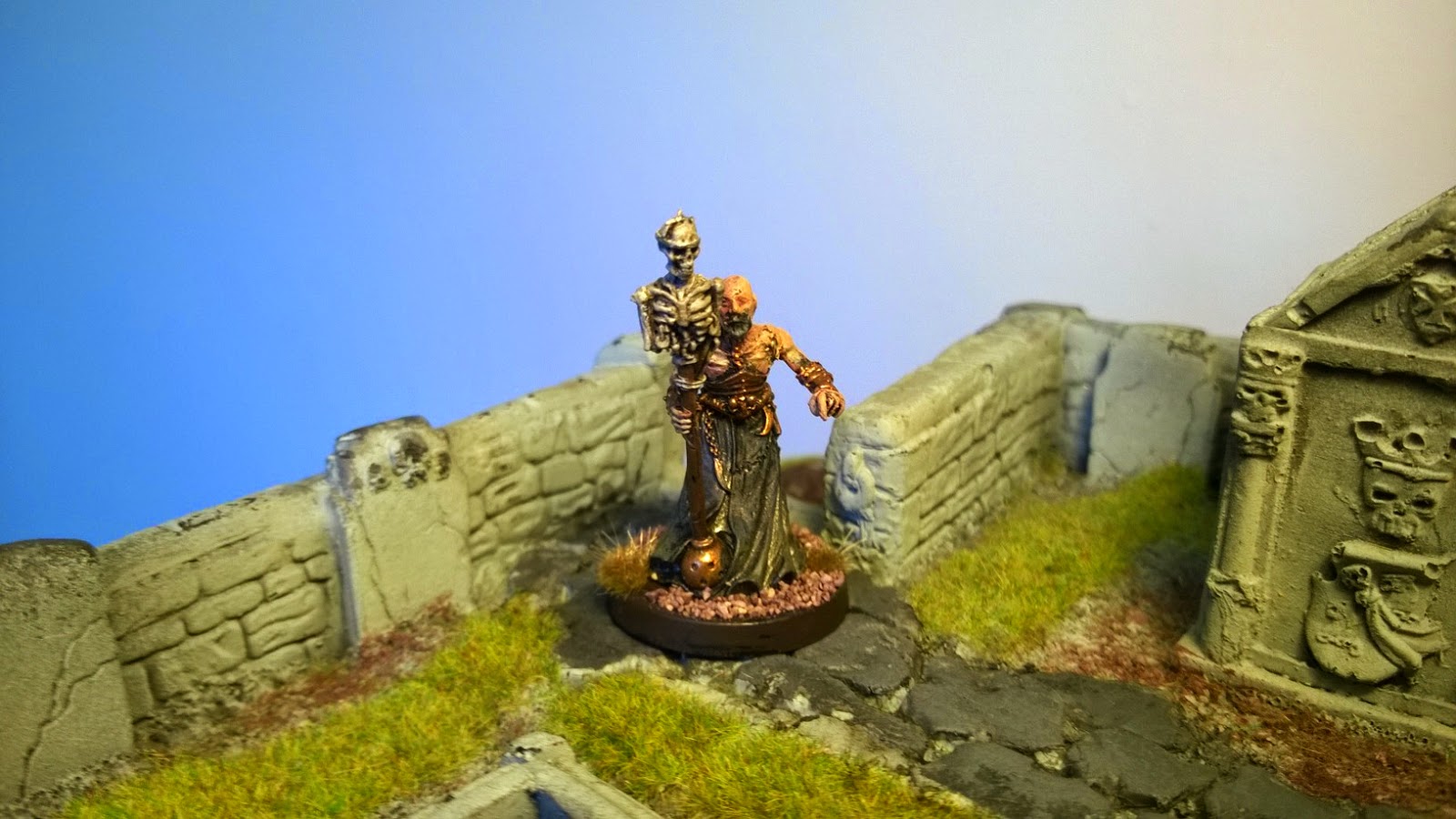 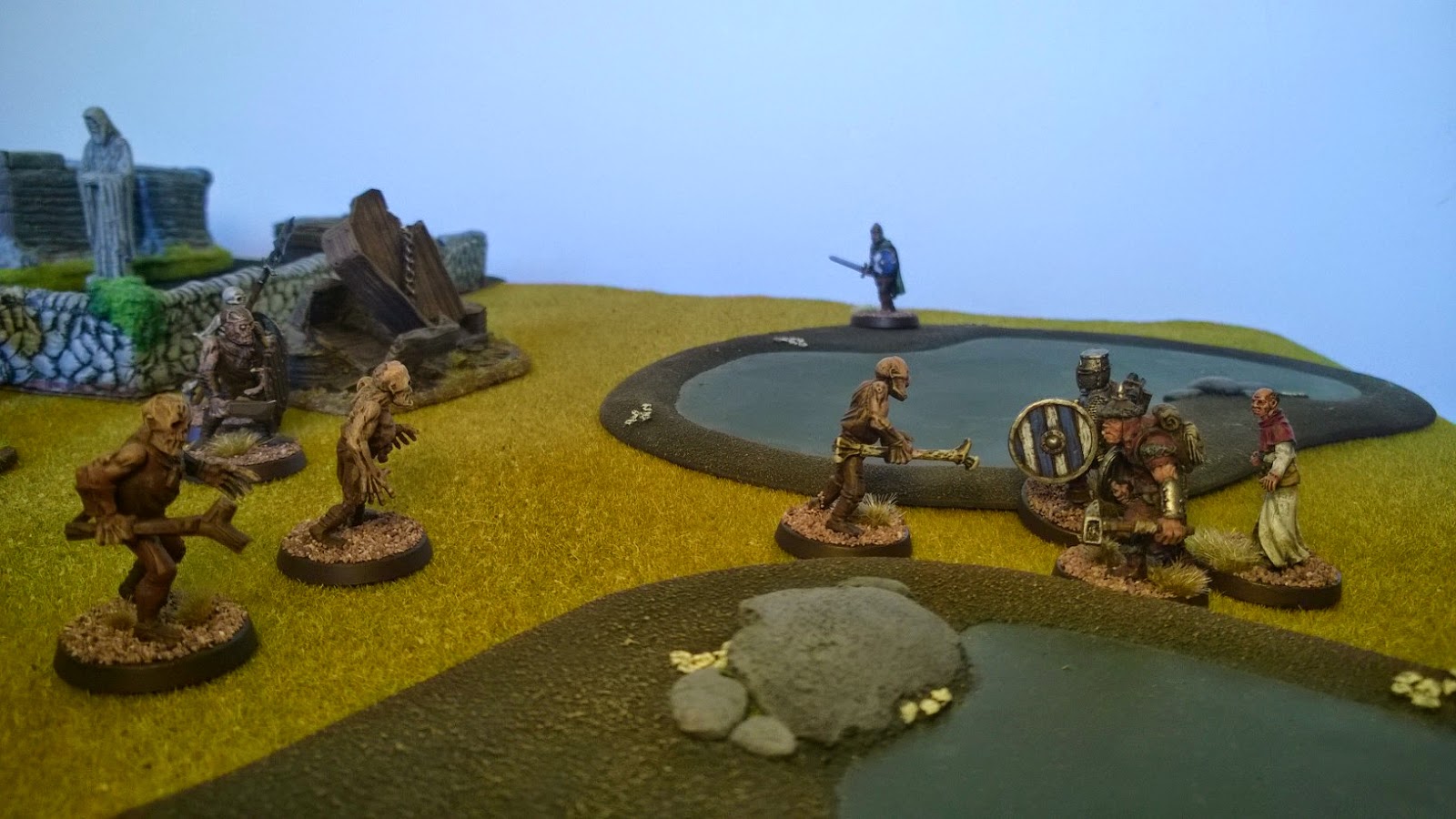 The first turn was all about maneuvering into position to make best use of a limited amount of actions, but the second turn everything kicked off. The two tanks charge the zombie line but fail to actually do any damage, while the two scouts flank around the marshes and one kills the zombie in her path. In return the undead move all their figures in and strike a wound on the male scout, while the necromancer rolls spectacularly well and raises 2 zombies and 3 skeletons. 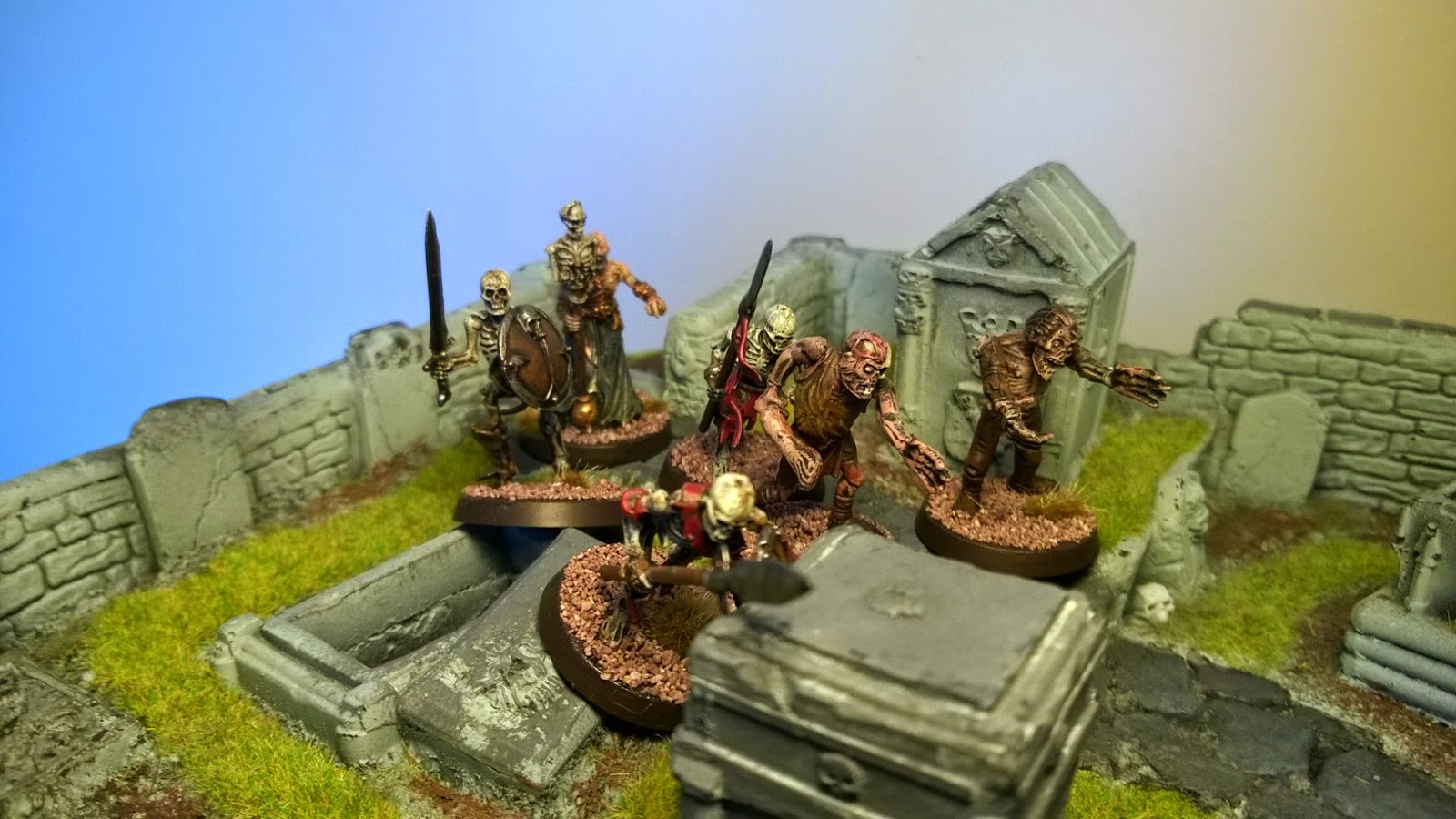 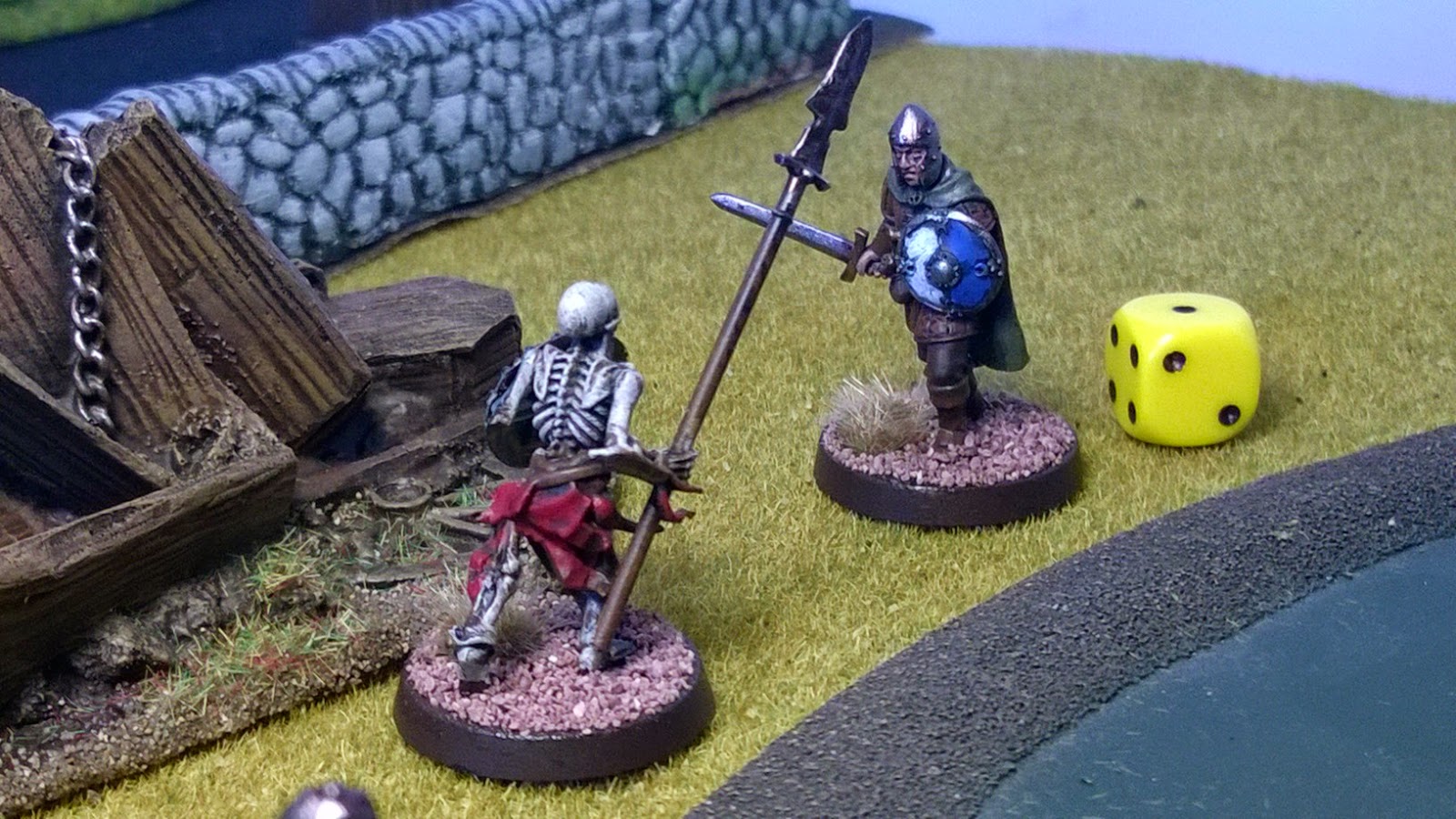 Faced with a wall of undead the 2 tanks both use everything they have to try and break through, but can only kill a single zombie, but the wounded male scout does better and kills his attacker. The undead continue to push forward but only achieve nothing and the necromancer only raises a single zombie to replace his loses. 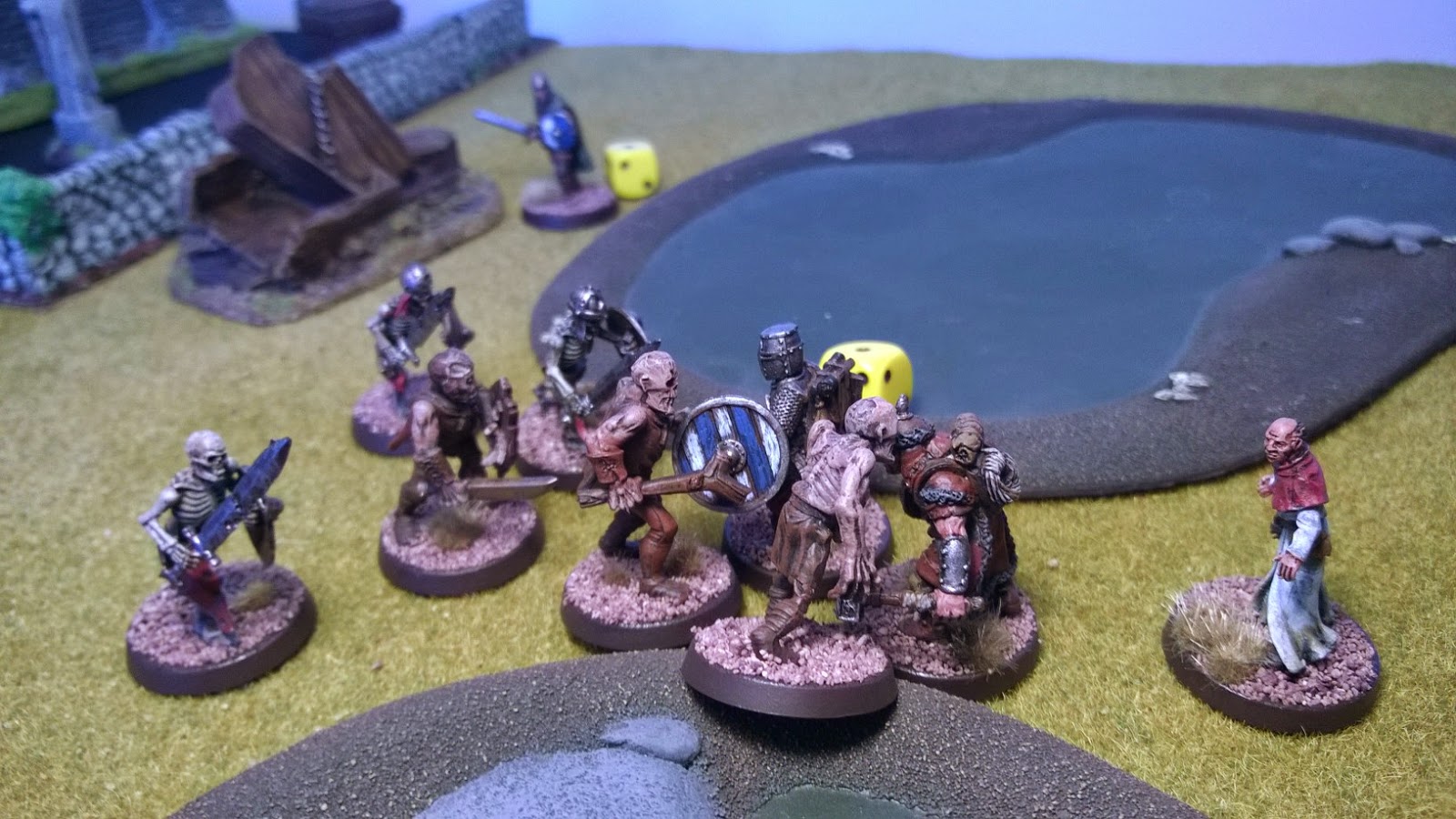 The adventurers took the opportunity to counter attack and kill off 3 of the undead and the priest managed to heal both wounded members of the party. The undead manage nothing in response but do raise 3 zombies. 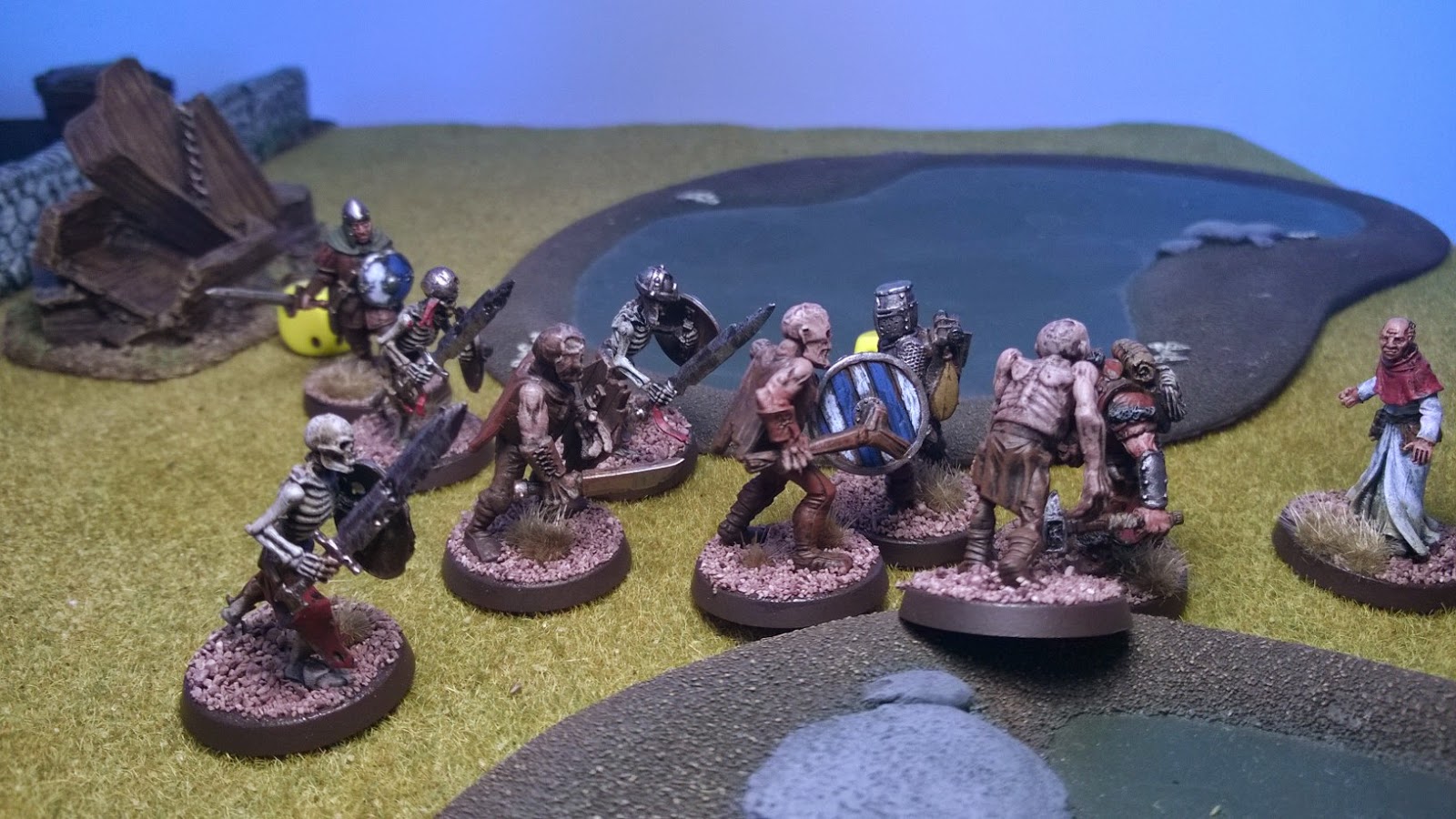 Pushing further forward than they have managed all game the party smashes into the next wave of undead, killing 2 more zombies and a skeleton, but lucky dice rolls from the undead means that both scouts and a tank all take wounds. 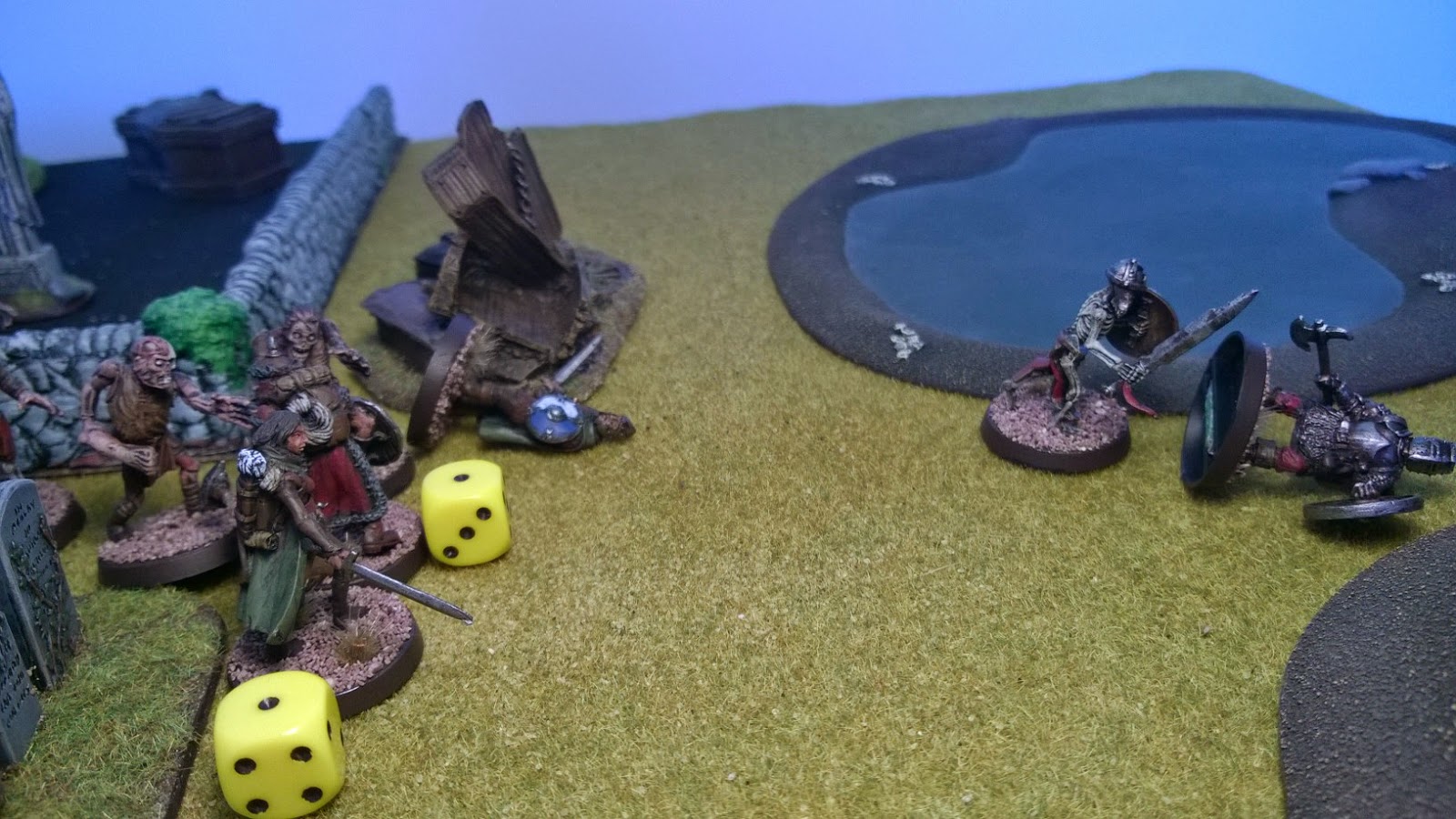 In another turn of continued good dice rolls from the undead, the party only kill off a single skeleton and can't heal any of it's members, but then loses a scout and a tank to the return attacks.

The last turn ended up just being a continuation of the turn before, as surrounded the last tank loses both of his wounds in a single turn as the numbers become to tell and with his death the party goes past it's break point, with just two members let, its game over. 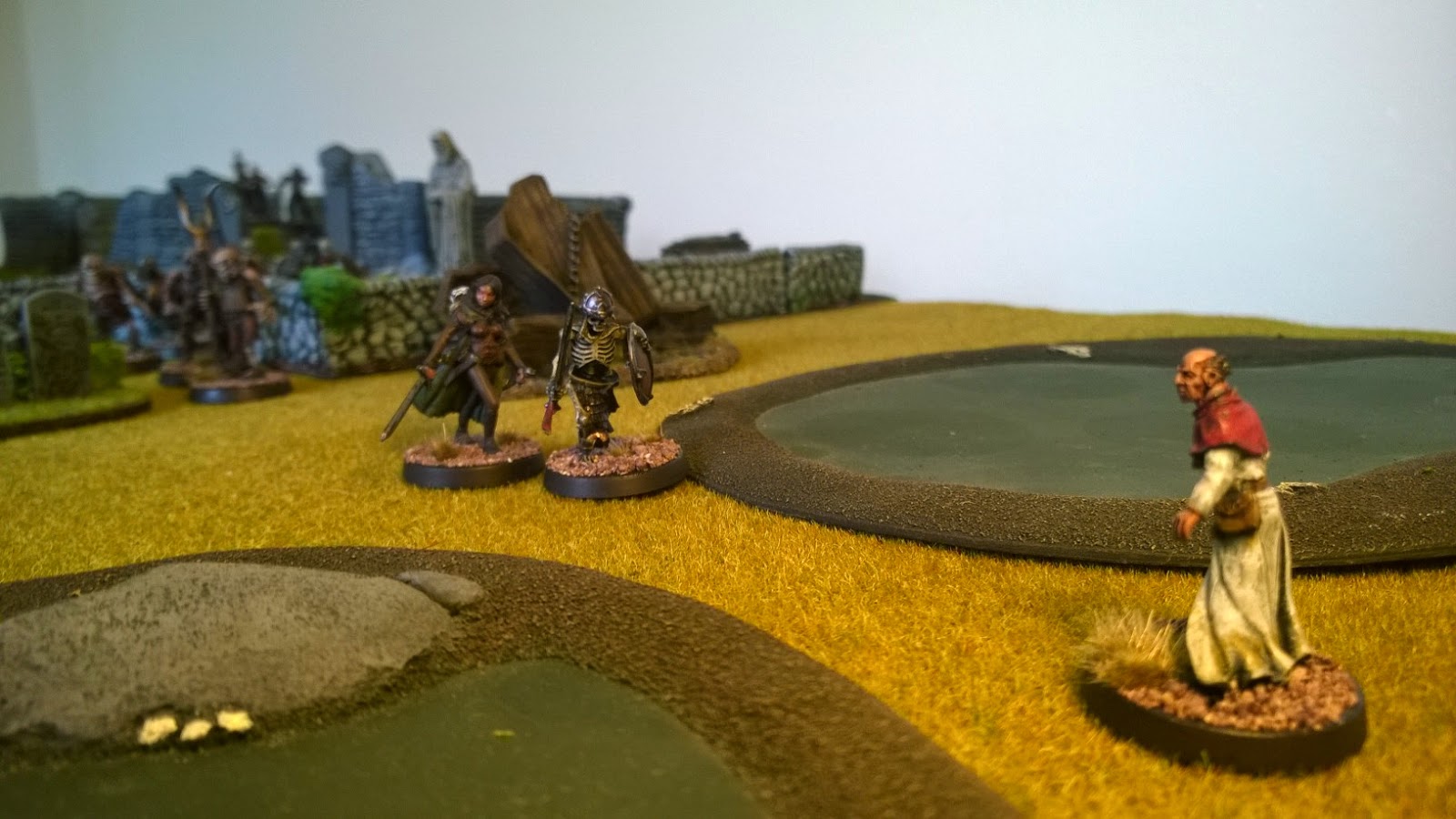 I am actually pretty pleased with how the game went, although I did make a mistake in how I played, which I think made a massive difference to how the game went. In raising undead I was raising a model for every wound the necromancer rolled, but that's not how a bow works in Open Combat, you don't kill one guy then carry wounds onto the next one, so it wouldn't make sense to carry spare raises over to another model. It was a mistake I made and not in the rules, which is almost more annoying for me to make. On the other hand this is exactly why I wanted to test my game out before using it as club, so any of my mistakes don't ruin a game someone else is playing.
I really don't think I will need to change all that much for when I take this down my club, I might just get a few more figures painted first though.