The lure of the Quest

One of the main takeaways I had from the Extinction of Thuros was that I needed to try out a knight in a list as they weren't the instant bad opponent creater that I thought they would be. Much as I keep looking at one of the bigger Forgeworld knights, I had actually picked up one of the plastic GW ones just after they were released, so it was time for that to be finished.

One of the biggest things I like about the warhammer universe is the fluff, so I like to make sure all my armies have some, in this case the knight is called Sir Krohn and he is from House Steinschild, which is on the planet Voyria. I used a made up house, so I could do what I want with them. Because this is a knight and heraldry is a big thing I have tried to get as much meaning as I can into the armour, so:
Incedentally, the house's colours and device are loosely * based on the Hufflepuff scheme from Harry Potter after I spent a couple of hours brain storming ideas and looking up famous knights from history with the aim of stealing their heraldry and ended up doing this instead.

*Really loosely - badger not a boar 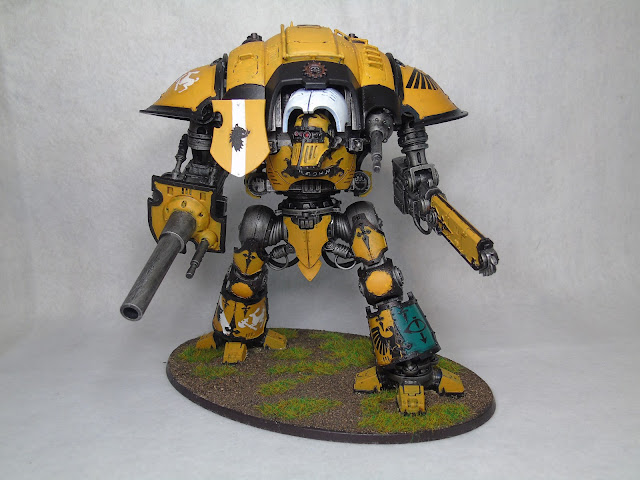 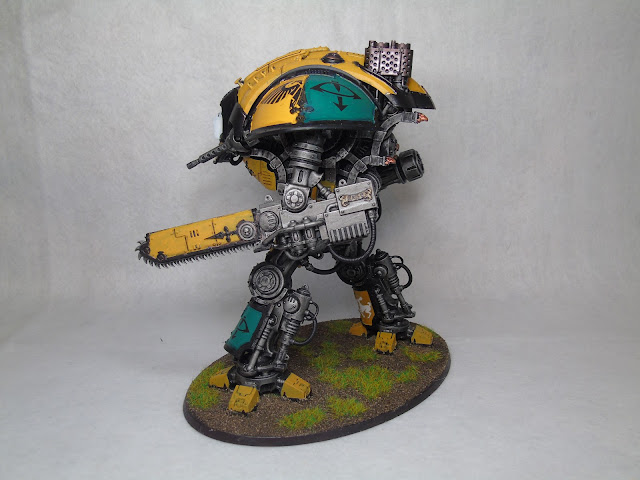 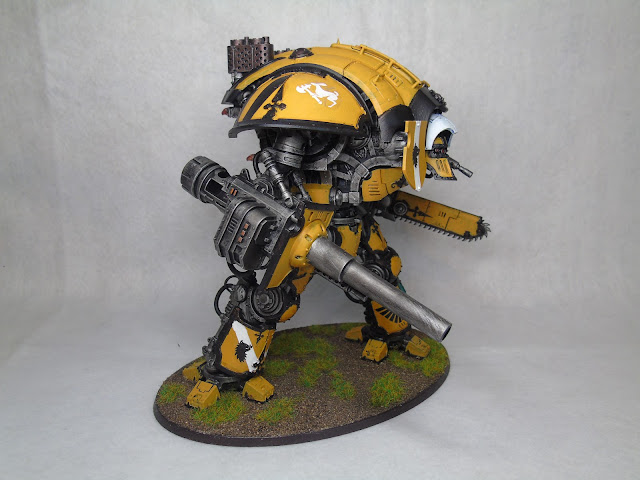 Considering this was a model I bought on a whim and had sat on a shelf for a couple of years, which me hating the colours I had used on it, I am really pleased with the eventual outcome and I am very tempted to expand this household in the future.

I have a lot of ideas floating around in my head at the sec and any number of projects that are vying to be finished first but as it is 30k that I'm playing the most (and planning on playing the most) it only makes sense that my main focus remains on it. As I have mentioned before, my Sons of Horus are very much my test bed army, I want to use them to try out list ideas so I know what suits my style and what suits the normal gaming styles I will see, one of the lists I want to try out is using as many tanks as I can fit into my points limit.
The Sicaran battle tank is fast becoming one of my favourite looking 30k vehicles and the Venator varient is by far the prettiest of these, so I knew I had to try *one out. 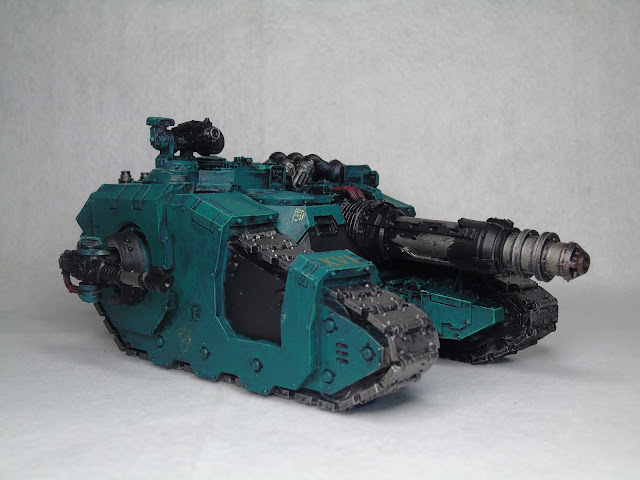 As per normal, my Sons of Horus colour scheme is fairly understated, as they aren't huge fans of embellishment and again, I've not weathered the tank yet as I want to go back over them all and get a unifed look. 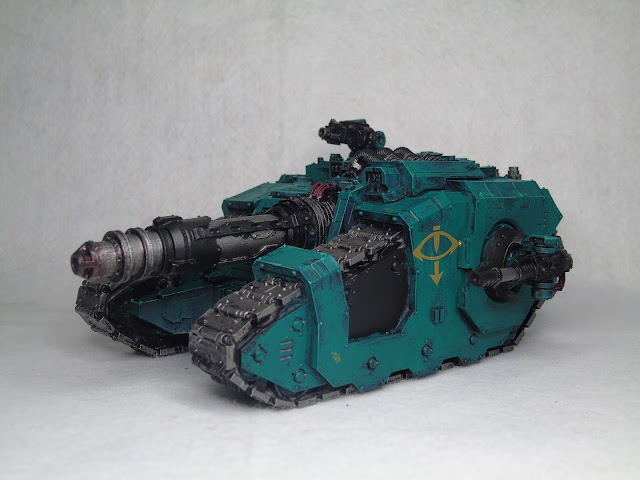 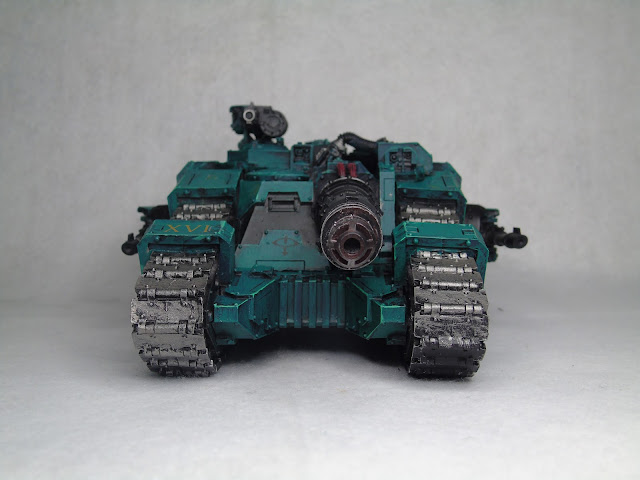 Rainforests - how hard can they be?

It's been a while since I've started a post with a blurb about a new project, so because I can't seem to keep focused on anyone thing for too long, here we go with a brand new project;
I have recently been travelling around the forests of Costa Rica and it's been hard not to come away so heavily inspired that I knew I needed to try building some. I've not tried to reinvent the wheel and have taken heavily from Sir Michael Awdry, so I won't go over how I made them in any more details than anywhere I have diviated from his method.

First up, I thought I would go over my inspiration. Costa Rica turns out to have multiple different types of tropical forest*, including; Rainforests, Cloud Forests and Dry Tropical Forests, with variations in between. This has meant I have seen the classic palm tree style forests, forests that look like British forests except for the heat and forests that have plants that would be unbelivable if modelled in 28mm unless you were planning on using them exclusively for sci-fi games.

*Rainforests aren't the be all and end all that I assumed 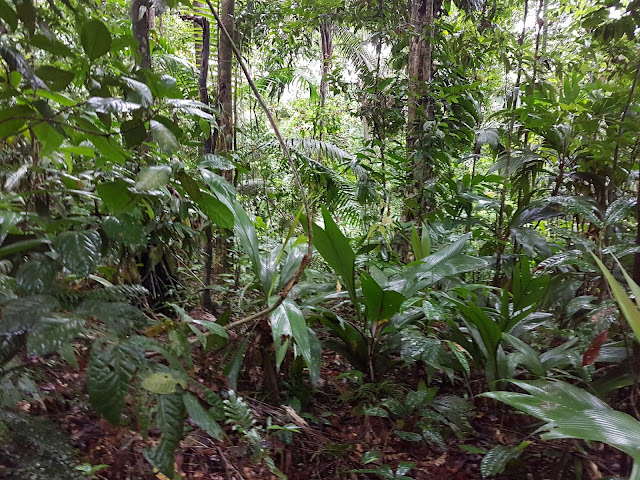 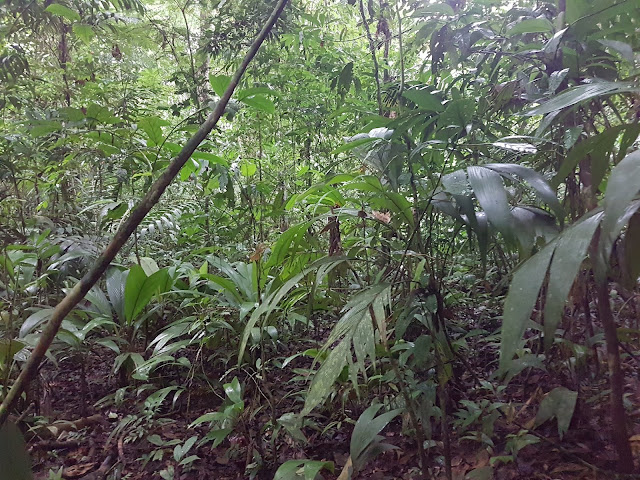 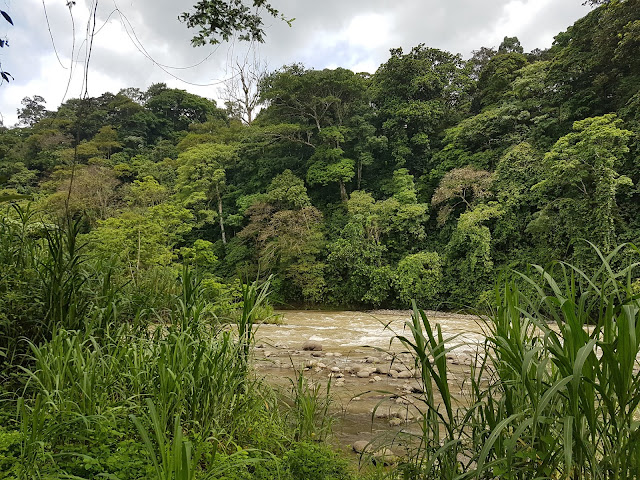 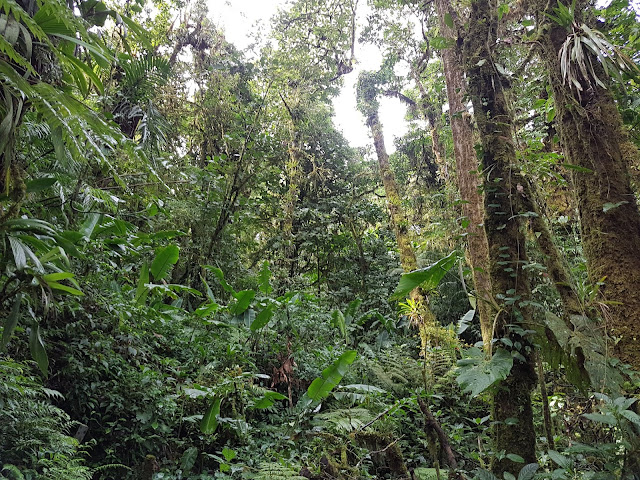 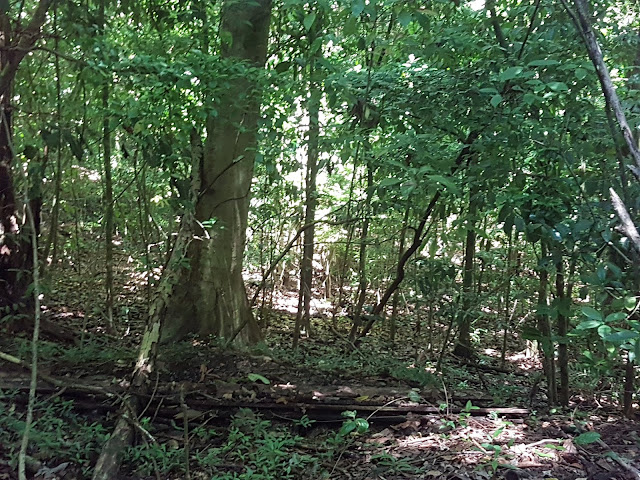 My dilemma then came when I tried to put what I had seen into practise, how do I get the sheer range of plants and thickness of the vegetation onto the gaming board and make it survive playing games with. Ideally, I want to have a mix of tree types (for my practise ones I was happy to just use palm trees) but I need to work out how to use other tree types without it looking like I have just put British trees in a rainforest board, but that is a problem for later.
Ultimately, I am pretty pleased with the outcome of my morning's work, the bases need a certain something but that will come with time I think, although any suggestions will be gratefully accepted.﻿ 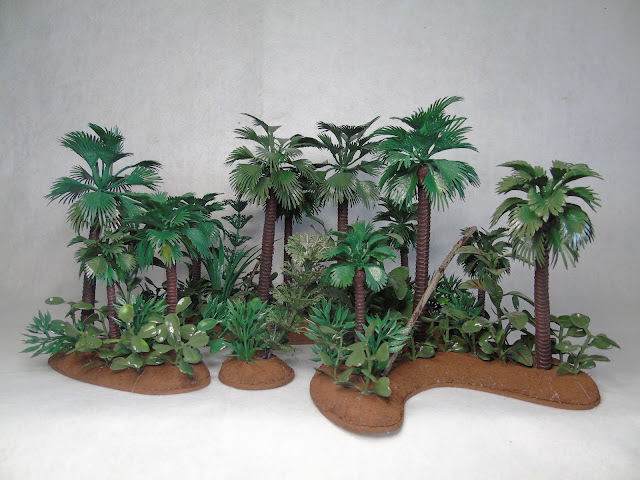 As these were supposed to be a test bed for a number of thing, namely; how many more plants do I need to buy, does my idea actually work and can I make them thick enough, I limited myself to 3 bases of trees and a single bit of scatter terrain. In the future I would like to fill a 6/4 board as heavily as makes sense. 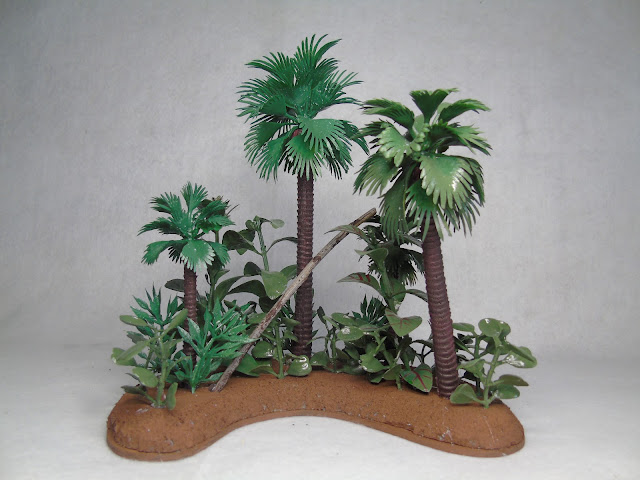 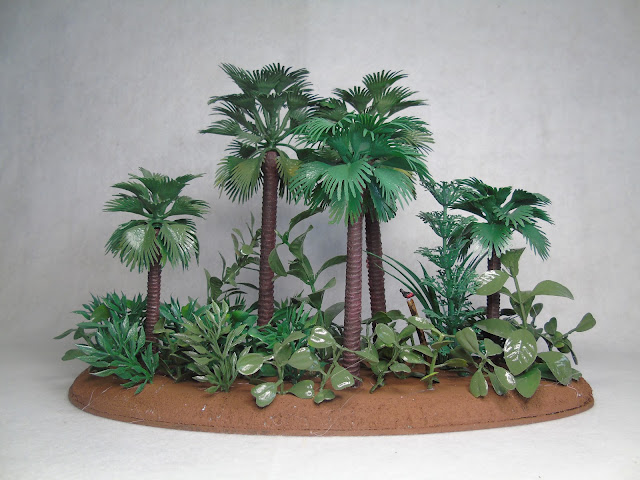 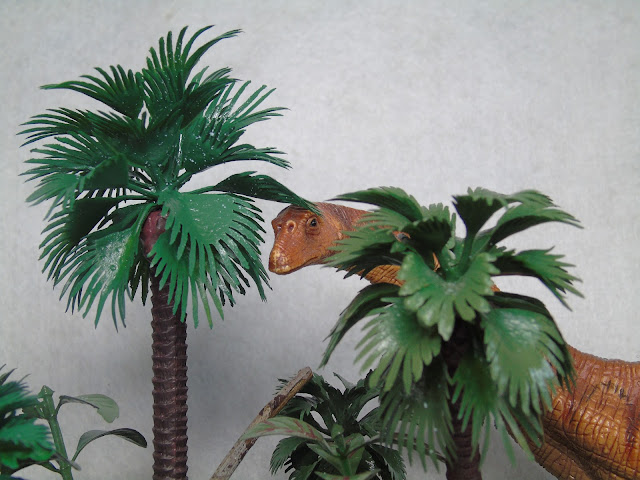 It's been a while since my last post and usually that just means I've been bad at getting my hobby progress documented, however, this time it's because my hobby achievements have been on the minimal side.
I have some exciting news about my hobby that I will reveal at a later date, but suffice to say it has made me rethink my hobby priorities for the immediate future*, with the decisions playing out over the next couple of months. Saying all that, I have done some hobby related stuff in the last few days, so with no further ado . . .

*Yeah, I know I do this every few months but this one is big
First up are the only models I have painted in the last month or so, a 5 man plasma support squad for my Sons of Horus. The honest truth is I don't really need this squad, but the look on my mate's face when I joked about building them was so good I had to follow through and as my other big squad is so heavily worked compared to everything else, it is nice to have a small squad I can fit into lists to give them a break.
I tried to give the 5 guys as much character as you can get into a basic squad of legionaries; the sergeant has a bionic right hand and an older mark head crest and the squad is a complete mishmash of kit parts to make it feel like these guys have gone through hell.
﻿ 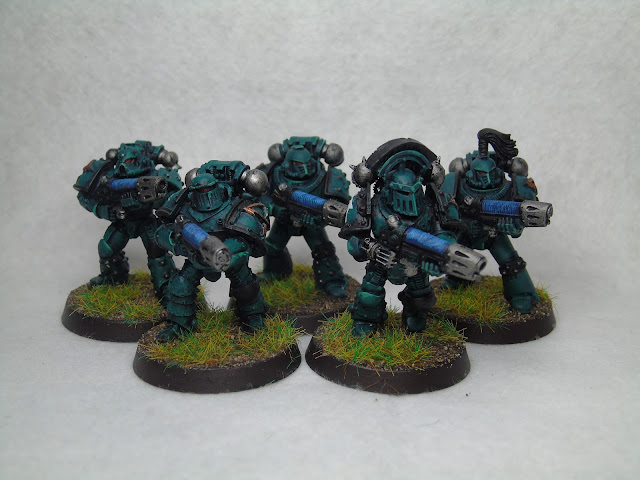 Next is an event I recently attended, the Warhammer 30k Extinction of Thuros campaign day run by the guys from the Legion of Lies podcast.
I signed up for the narrative event right back in February working on the theory that if I had a paid for ticket sitting on my shelf I would have some serious motivation to make sure my army got painted and that I was guaranteed at least 3 games of 30k over the course of 2018, and I am really glad I went, it was a proper blast.
First things first, as it was a narrative event, the tickets were sold as either Loyalist or Traitor, no weird matchups here, so I duly bought myself a traitor ticket. Then as the games went on the guys would explain what the results so far meant in both the fluff and in game, in this case as the traitors lost the initial round of games it was deemed that they had claimed a foothold on the planet, but had failed to neutralise all of the planetary defences, cue orbital bombardment for the loyalists.
Your warlord also needed a name and was given his own page in the gamer's packs to fill in as he could advance throughout the day*.

*Mine didn't so much advance as die**
**a lot
So, my army: I didn't take a particularly hard list, and knowingly didn't, as I was very aware that I wasn't fully clued up on the rules and I didn't want to get something wrong and look like I might be cheating. I was also advised that 30k lists either need to have a lot of vehicles or none at all, as the sheer amount of anti-tank makes having a few pointless, so in my list I had a single rhino that either hid or drove full pelt fuelled by hope.
The big thing I noticed on the day was how many imperial knights the loyalists had, compared to none on the traitor's side*** and as I managed to play two of them it was a real insight to how a beast like that can change the feel of a game and not in the overwhelmingly bad way I had expected. I am going to do a photo dump of my better photos from the day (I forgot to take as many as I had planned) but they really don't do justice to the sheer quality of painting that was evident at the event **** and it's really made me feel like I need to up my game in the future.
***Not sure why none of us took one but they were so prevalent on the other side
****There was a single badly painted army and that was my second opponent
The other thing you will notice from the pictures is the fool hardy way I used my assault marines, as they were my most potent anti armour I tended to use them aggressively to neutralise threats early on - this worked better in some case than in others*****.
*****They did kill a knight﻿ 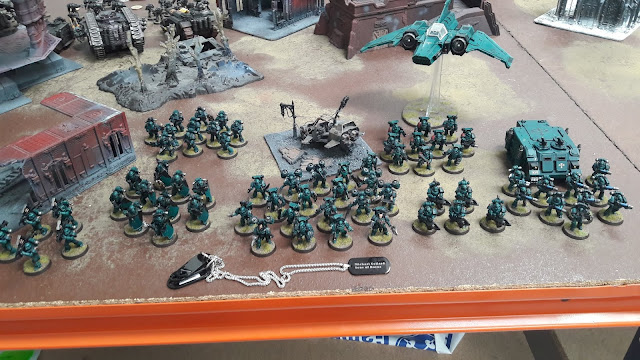 Not my photo but I can't remember who took it.﻿ 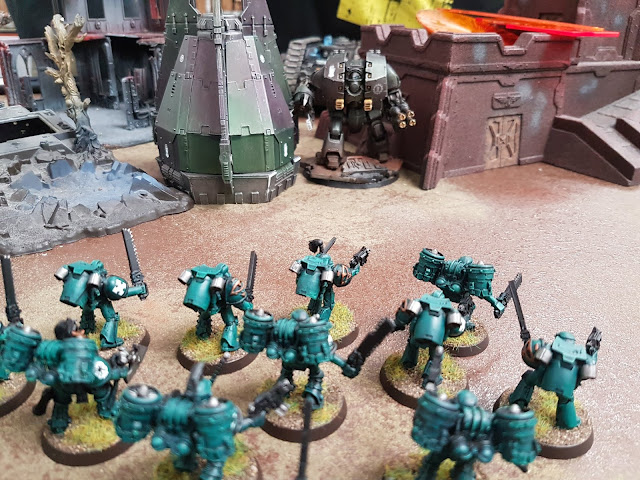 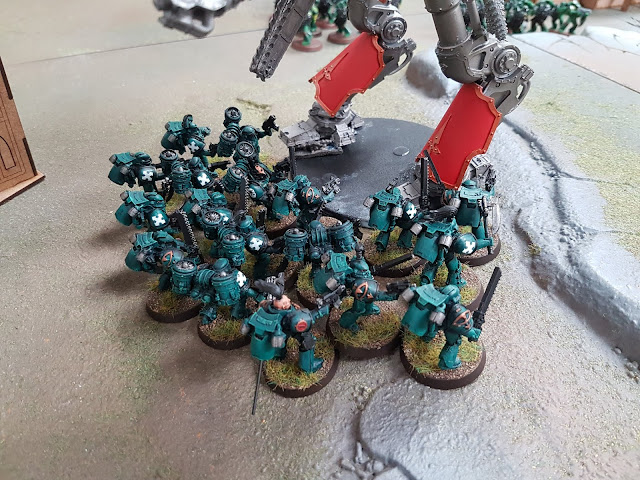 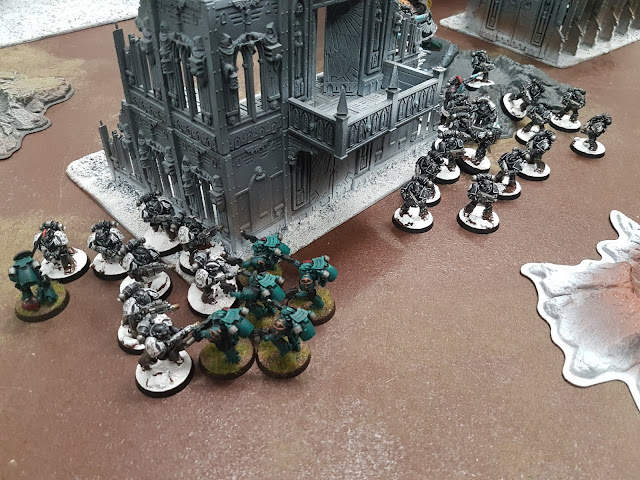 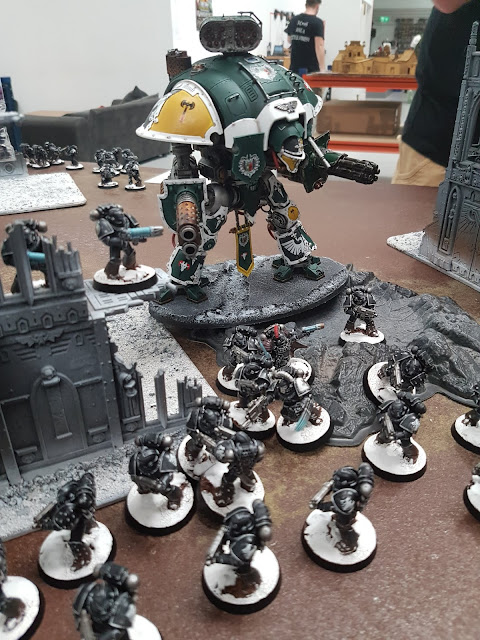 With two massive losses and a minor loss it came as no surprise that I won the wooden spoon for the traitor's side - brilliantly named the Best Loyalist. The weird part, and it's something I commented on to the organisers, is that the two big losses were the games I enjoyed the most, the minor loss was merely a good game - probably because I killed a forgeworld knight in combat . . . 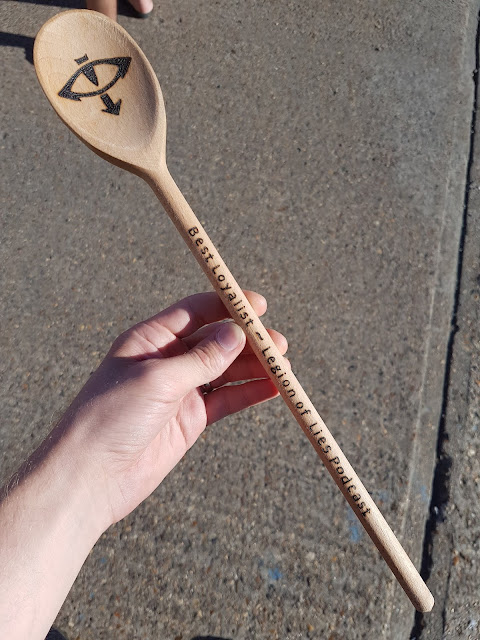