Back to the Eternal City

I started this post last summer, but it didn't get posted as I thought I hadn't done enough to justify a post. However, I've had a bit of a second wind for Gangs of Rome* and I would like to get it on the table a lot more than I currently have, so it felt like the right time to revist the streets of the eternal city.

*While I don't want to buy into any more 'get the figure card
with the official miniature' style games, I also need to play the ones
I have bought into a lot more.

I've found myself reading a lot of Roman themed novels in recent months including the Cicero trilogy by Robert Harris which follows the life and career of (I hope this isn't a surprise) Cicero the famous Roman lawyer and Politician who lived through the rise (and fall) of the triumvirate** and both of Harry Sidebottom's Roman series set in the crisis of the 3rd century after I met him at a Writtle Bit of Lard.

After a quick check of what was in my backlog, it turned out to be 2 bases of the mob, 4 fighters and a handful of extra figures along with various bits of scenery. Nothing that can't be managed. 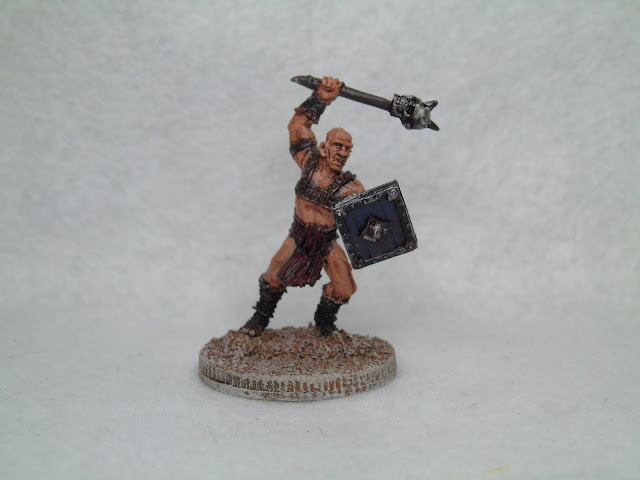 The first figure is my version of the gladiator. Apparently the figure is a limited edition Warlord games model from a few years ago, but as I bought it from Firestorm games in my pre-GoR excitement, I'm not sure how limited it actually is. I found myself pretty underwhelmed by the 'official' gladiator, so I wanted something with a bit more flavour and this guy fitted the bill. 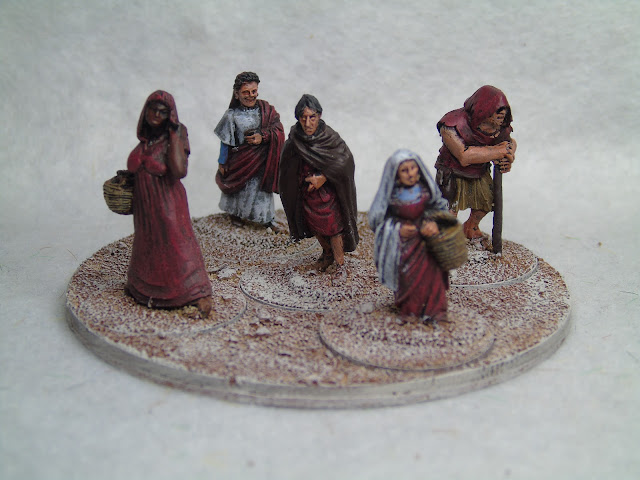 Next up is another base of the mob painted as a batch as per my normal technique. 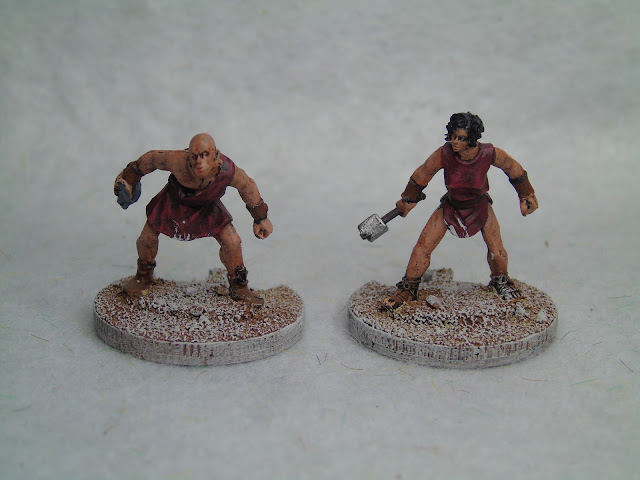 Lastly, for figures, are two more fighters, namely; Aelianus & Fulvia. The way the guy was hunched over made me decide he must be the roman equivalent of a skin head, so that's what I went for. 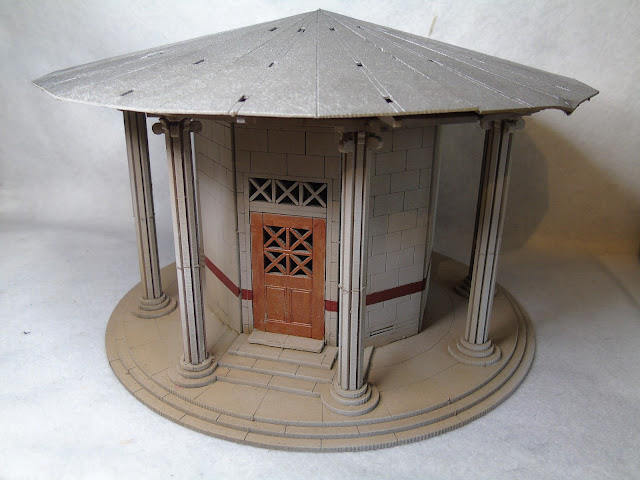 To keep it mixed up, I thought I would include a bit of scenery too. In this case a simple round temple – dedicated to an undisclosed deity at this point.
After seeing the simple Gangs of Rome demo board at Salute, I have been inspired to do another little scenery order, so there is more coming in the near future. 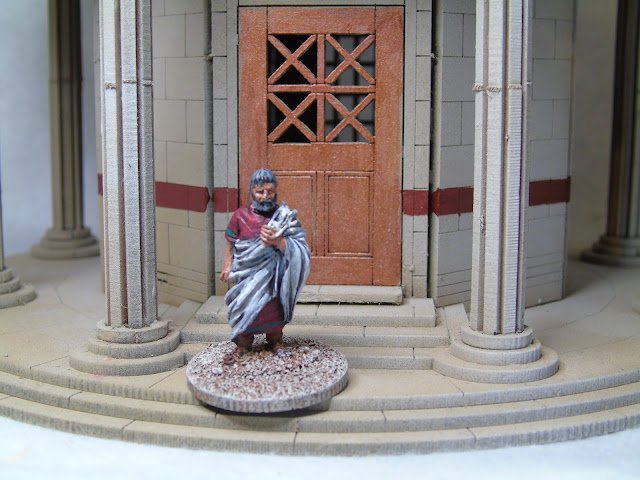 Also, as part of my birthday day out *** my wife organised to go to the Temple of Mithras in London. The temple has free entry but needs to be booked in advance and is an amazing 45 minute distraction if you are in the city for something else.
The room with the temple's remains in has a 20 minute light show and viewing time pattern to make sure every ticket holder gets the best from the exhibit
***Last year 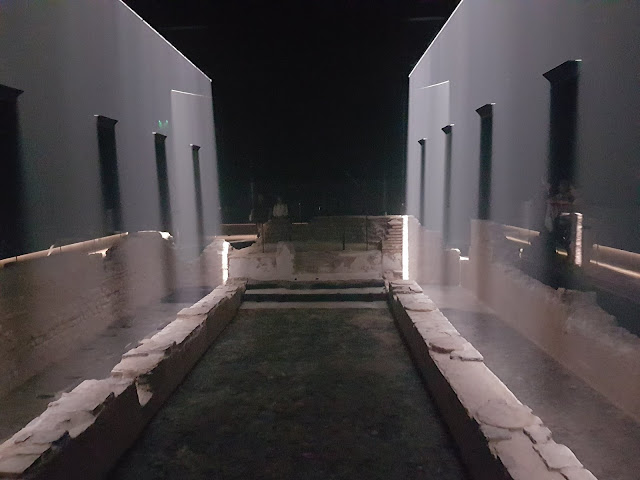 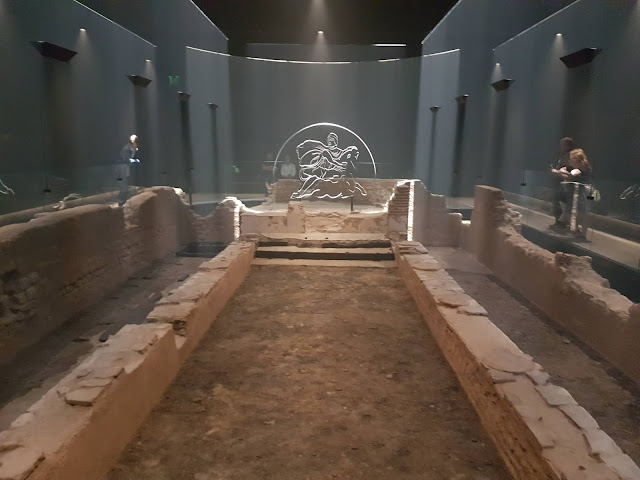 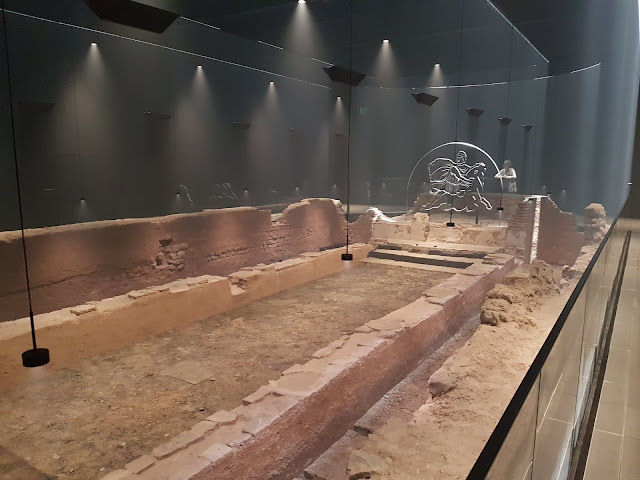 Email ThisBlogThis!Share to TwitterShare to FacebookShare to Pinterest
Labels: Gangs of Rome, Scenery

It's been a while since my last entry to the Wagons and Cartscategory* on my blog, so with a long bank holiday weekend, I thought it was high time I added to it and got another model off my backlog. As I say so very often, this model was bought while I was in full Napoleonic buying swing a couple of years ago, and has languished in my pile of potential ever since.
The wagon is from warbases, along with the horses, while the drover is a Perry Miniature (I think). I am pretty confident there are no rules for field forges in Sharp Practise, but it was another model that I just thought looked amazing. 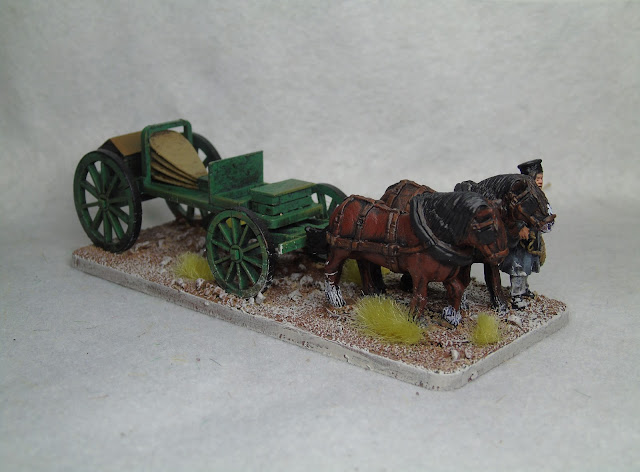 It's been given the same technique I used on the ACW cannons – namely Ford Green Meadow spray, black wash and a lighter green edge highlight, something I will do for all future Napoleonic woodwork, I think. 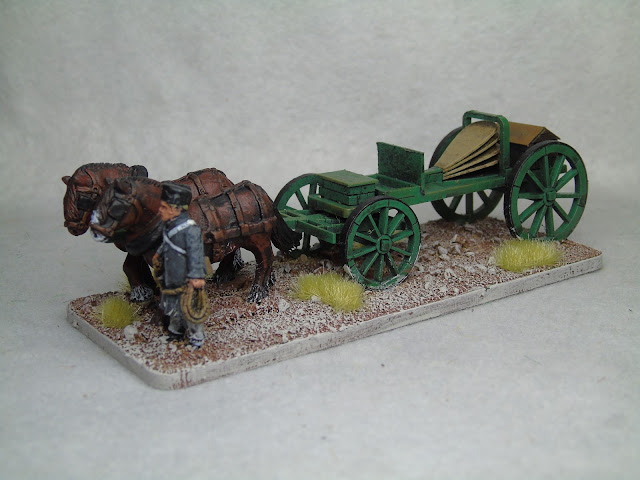 Back to the Dark Ages

A slightly bigger gap between posts than I had planned, as I had my first days off work due to illness in I think 4 years and, while I normally dream of days off to get on with my backlog, I struggled to do anything but sleep. However, I am back and basically fixed, so here we go again.

One of the things I picked up at Salute* was my pre-order from Gripping Beast of a box of their new Shieldmaidens. The dark ages are my favourite period in history and I seriously doubt I will ever stop adding new armies, warbands or units to my collection, however, my backlog of projects for this period has gotten a little bit daft. Since Christmas, I have had a couple of Norse-Gaels on my desk at any one time as I'll paint a figure whenever I have a flash of inspiration, but that isn’t how you get an army painted, so I’ve decided to go back to my system of batch painting across units to get the project moving a tad faster and include the last few Saxons to get them finished too**. That isn't to say I'm trying to finish this project before moving on to other stuff, but I would like it to be slightly further along.

*I was actually really good, going off my pre-set list only once and it wasn't for these
**As I think I am down to the last 8 or so figures 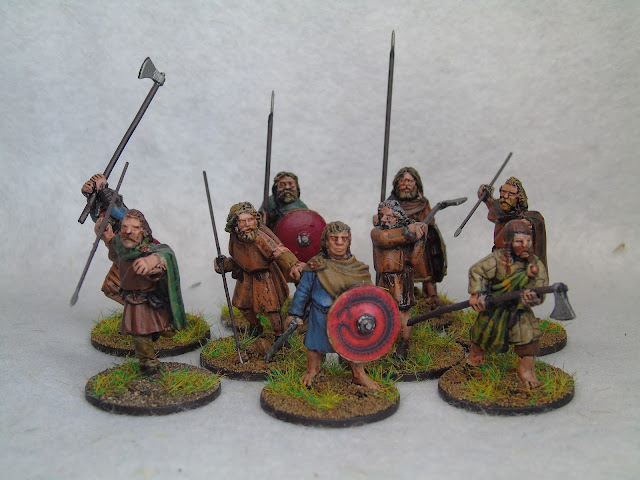 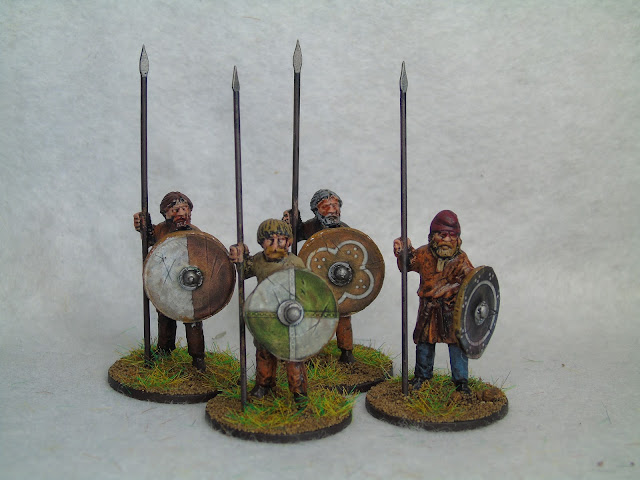 Episode 2 of the Mournival Podcast comes out in a week or so and I figured it was about time I had some hobby to chat about in the hobby section, so I made sure I spent the weekend focussing on a couple of units in particular.
When it comes to Warhammer 30k, my two favourite units have turned out to be my assault marines (fast combat units that I also use to kill tanks) and my plasma gun armed support squads in rhinos (fast shooting units), so on the drive back from the last event, I had a lot of time to chat hobby and throw ideas about, one of those ideas was Outriders. so, against the advice* of my fellow podcaster, Keith, I placed an order the day after the event.
Outirders are bikes (so fast) and they can be equipped with twin-linked plasma guns (my favourites) and anti-Tank bombs and weapons, so can basically do the job of both my favourite squads, but in one. I have a feeling 2 units of 3 bikes won't be big enough to do the job, but I wanted to get them on the table and see what I could do with them.


*Advice being to leave a week
after an event before ordering anything . . . 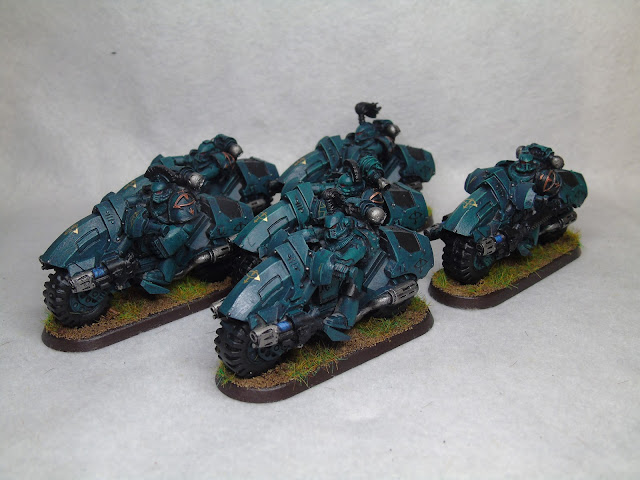 There are a couple of minor head/arm/etc swaps in the two units to try and make them more Sons of Horus 'flavoured' but nothing major. Although, I plan to do more work on any extras I add to the squads. 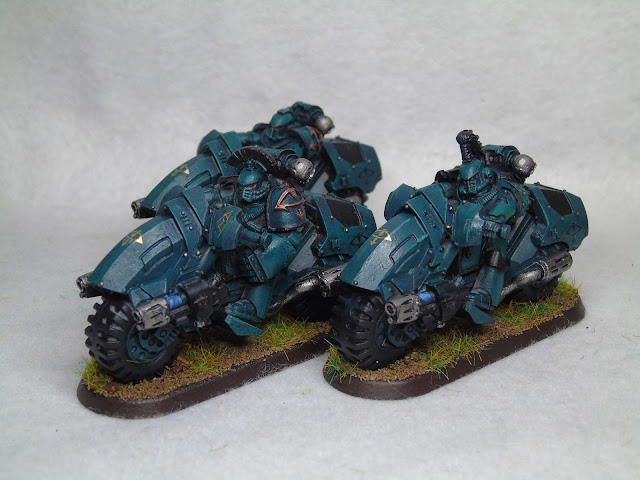 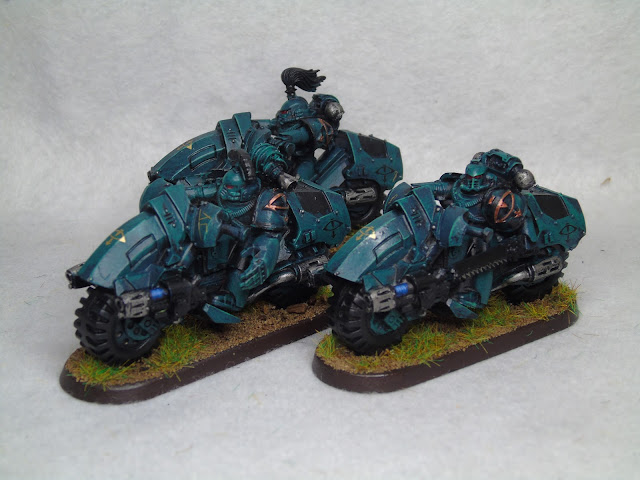 While they are missing on their last decals (currently on a waiting list to recieve them) they look pretty good in a game: 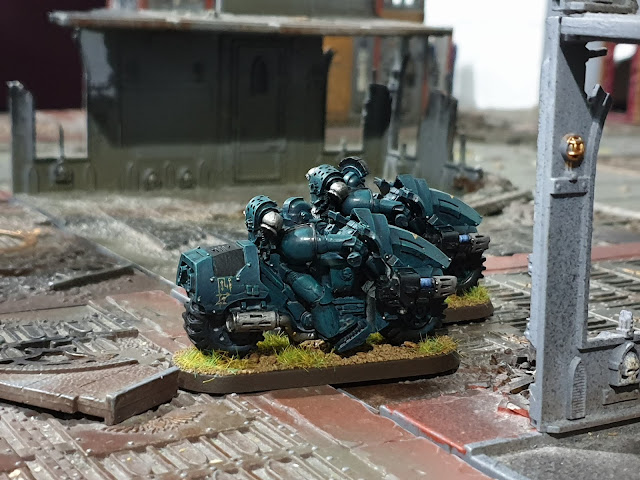 A quiet afternoon in the garden

“No one knows who taught the Little Folk about Marxism, but it is well agreed that there will be hell to pay when they are discovered, for this was the beginning of the time of trouble”

I was on the Midlams Miniatures site looking for a few more Rangers* and my basket was a tad light to justify the postage, and I'd looked at the Gnomes before and didn't know what I would do with them. This time, however, was the day after I had happened to have a skim through my copy of Open Combat and it all came together as a plan.


*I love the ranger archeotype anyway and
now I have Rangers of Shadowdeep to justify it.

One of the things that drew me to Open Combat in the first place was how easy the stats are to ‘fudge’ into an appropriate game. If I want to do a gnomish raid on a garden patch I can stat my human gardeners up to be more powerful than a hero in another game, but it doesn’t matter as the gnomes they are fighting will be much weaker. This then allows you to use those daft little collections, that you still can’t really justify, in an actual game without needing to buy enough to make a Dragon Rampant force or something similar.
With an idea in my mind and a vague stat line written out and pointed up, I bought 1 gnome too many for what I thought I needed** and this daft project was started. Now, with Salute in less than a week, I wanted to make sure these were off my painting table, as it will come as no shock, that I have a shopping list.

**Can't risk having too few 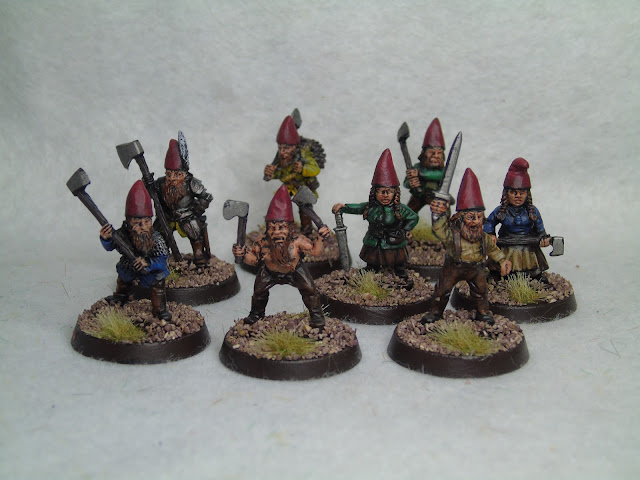 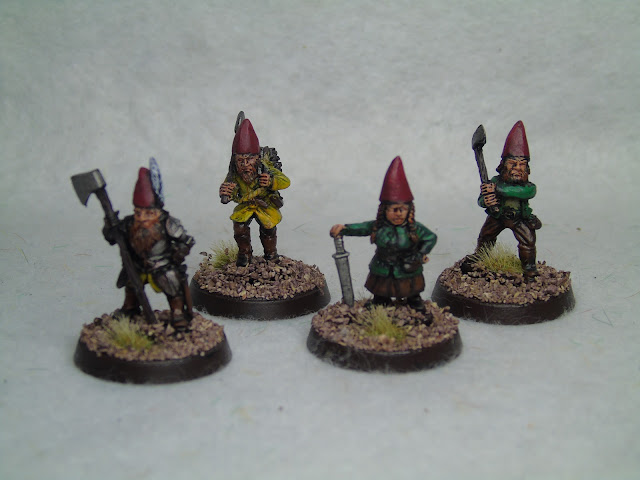 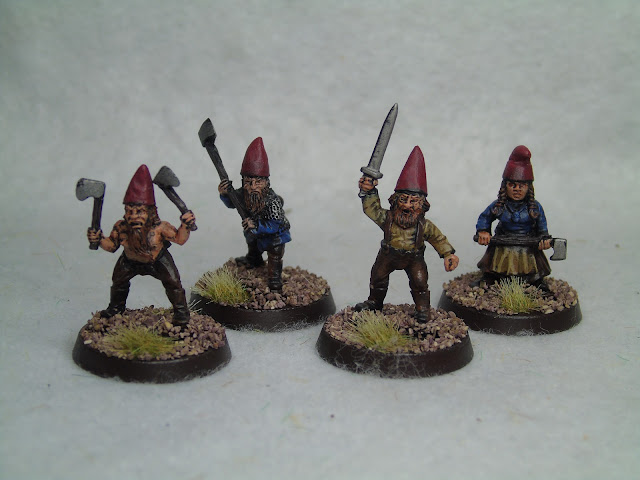