A belated Merry Christmas to everyone reading this, I'm only two days late. . .

This post is a mix of a model painted and a bit of my Christmas haul, but it's stuff that all ties together quite nicely. The four buildings in the picture below are from two different ranges, three of them are conflix, merchant's, guild master's and money lender's houses respectively, while the last is from the Ziterdes range. 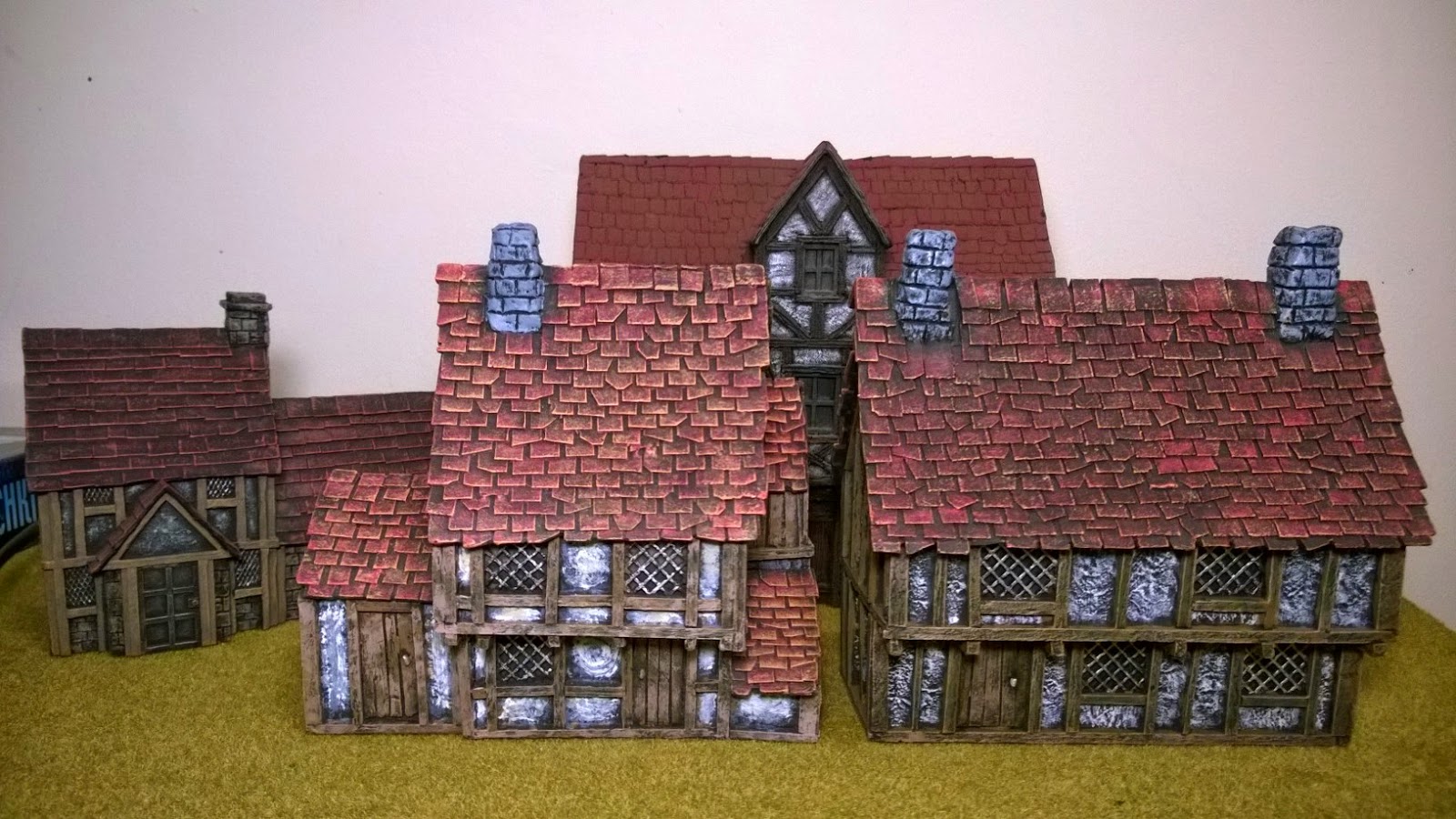 Ziterdes is a manufacturer that I have heard about before but never really had much to do with. I bought a couple of small bits of theirs from a little model shop I stumbled across a few weeks back, and then talked myself into going back and buying another couple of much bigger bits from the range. This building is the first of those two bigger purchases and took quite a bit more work than the last two bits I bought. The models don't come anywhere near as nicely painted as the website seems to suggest they do but an hour's work repainting it and I still think they are good value for money, especially when mixed into my current collection of buildings. 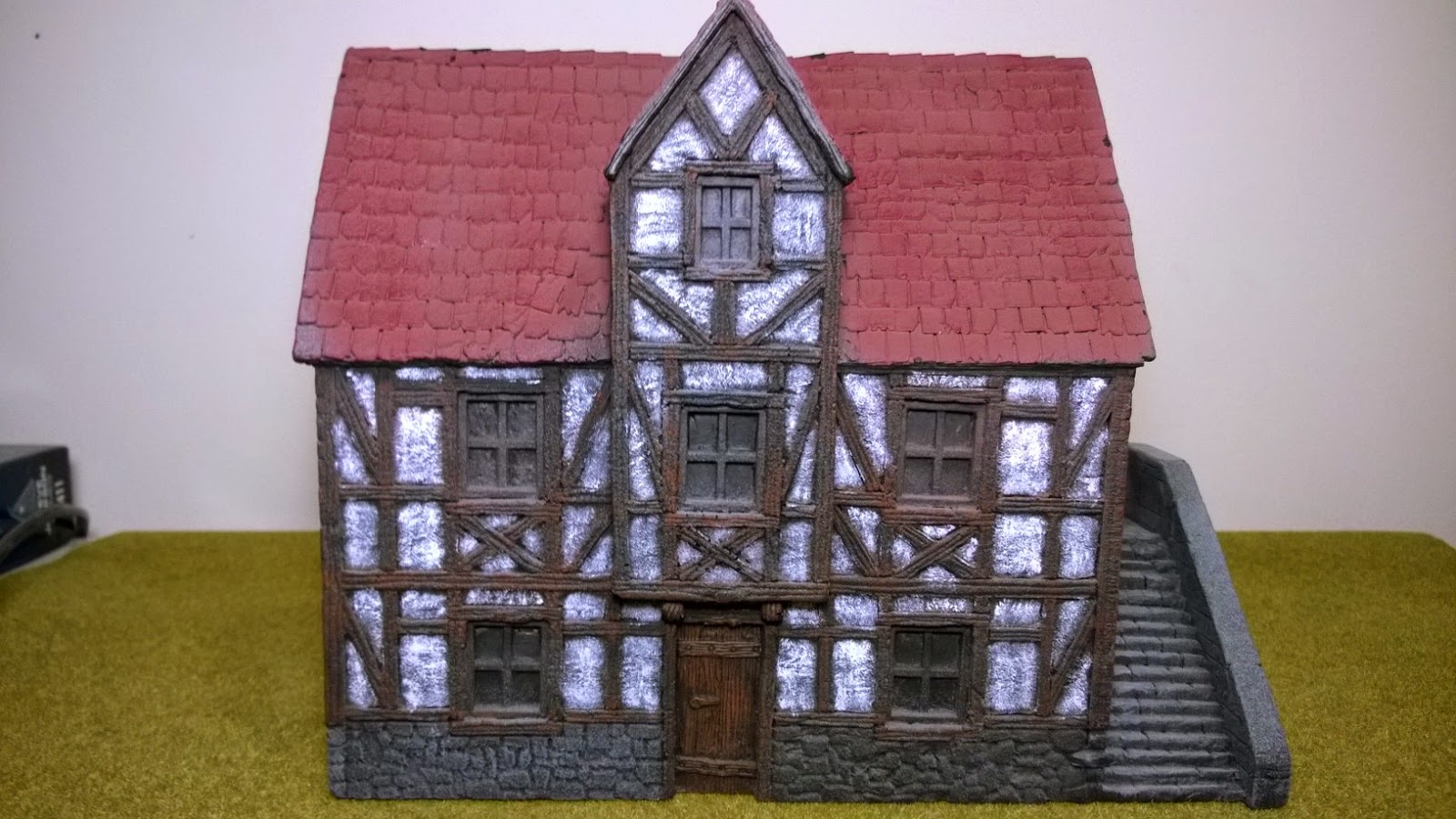 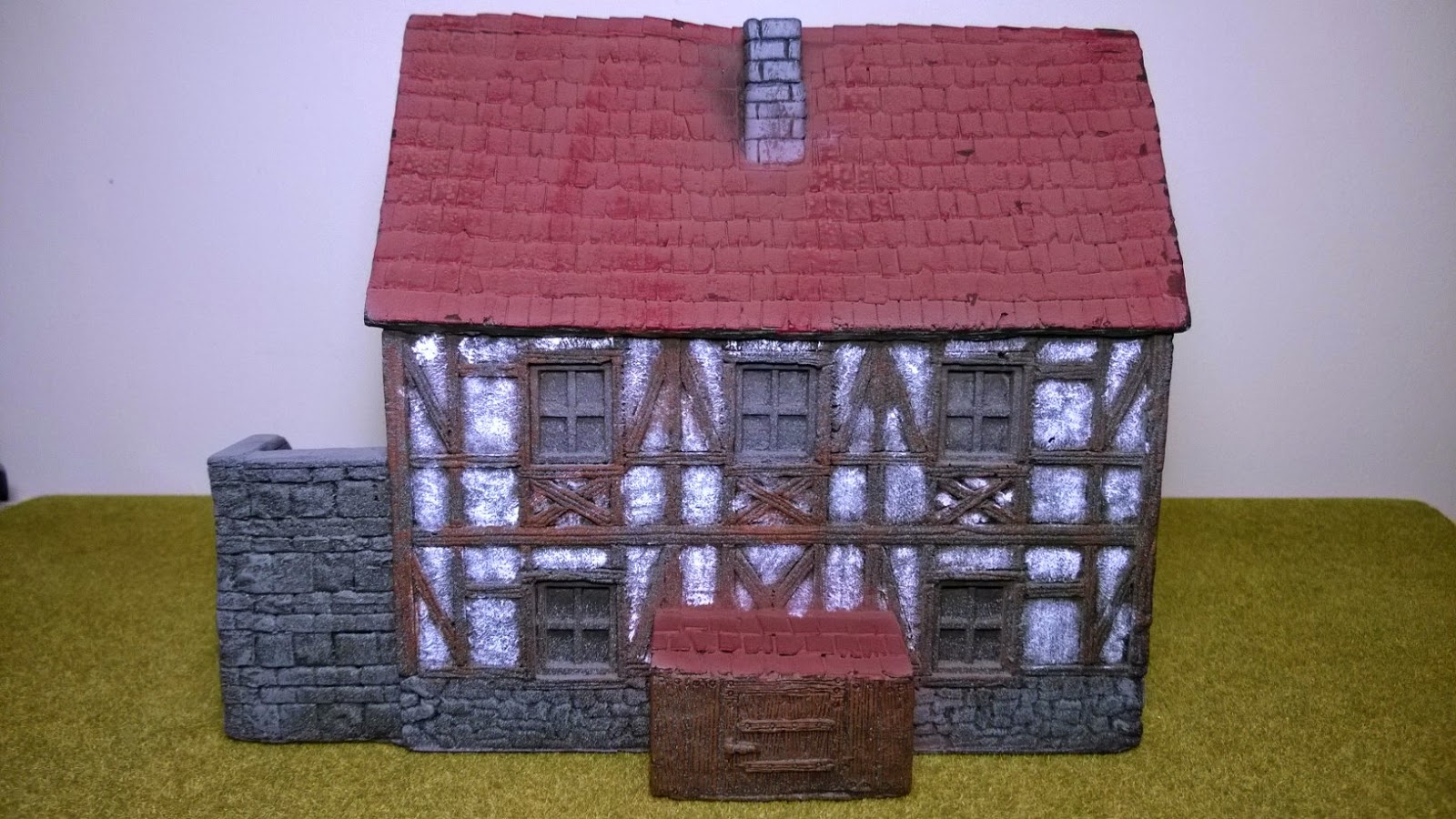 Although I still haven't managed to organise a game of Bolt Action using my own figures, I have been putting some effort into getting a decent mix of figures ready for proposed games in the new year. Finished and packed away into their case are the minimum two squads needed for a platoon, a couple of specialist units, an armoured car and various tanks, a list of figures I was pretty chuffed with. So onto my painting desk went an infantry support gun team and another squad of infantry, then I sat down to work out how many points I had just so I had an idea of how big a game I could start looking to organise and I realised something, I hadn't painted up an officer.
So this week has been all about painting up the odds and sods of the left over German figures that have been floating around the periphery of my painting desk, not including the whole squad which got pushed back in priority, to try and get this particular project to the playable stage. 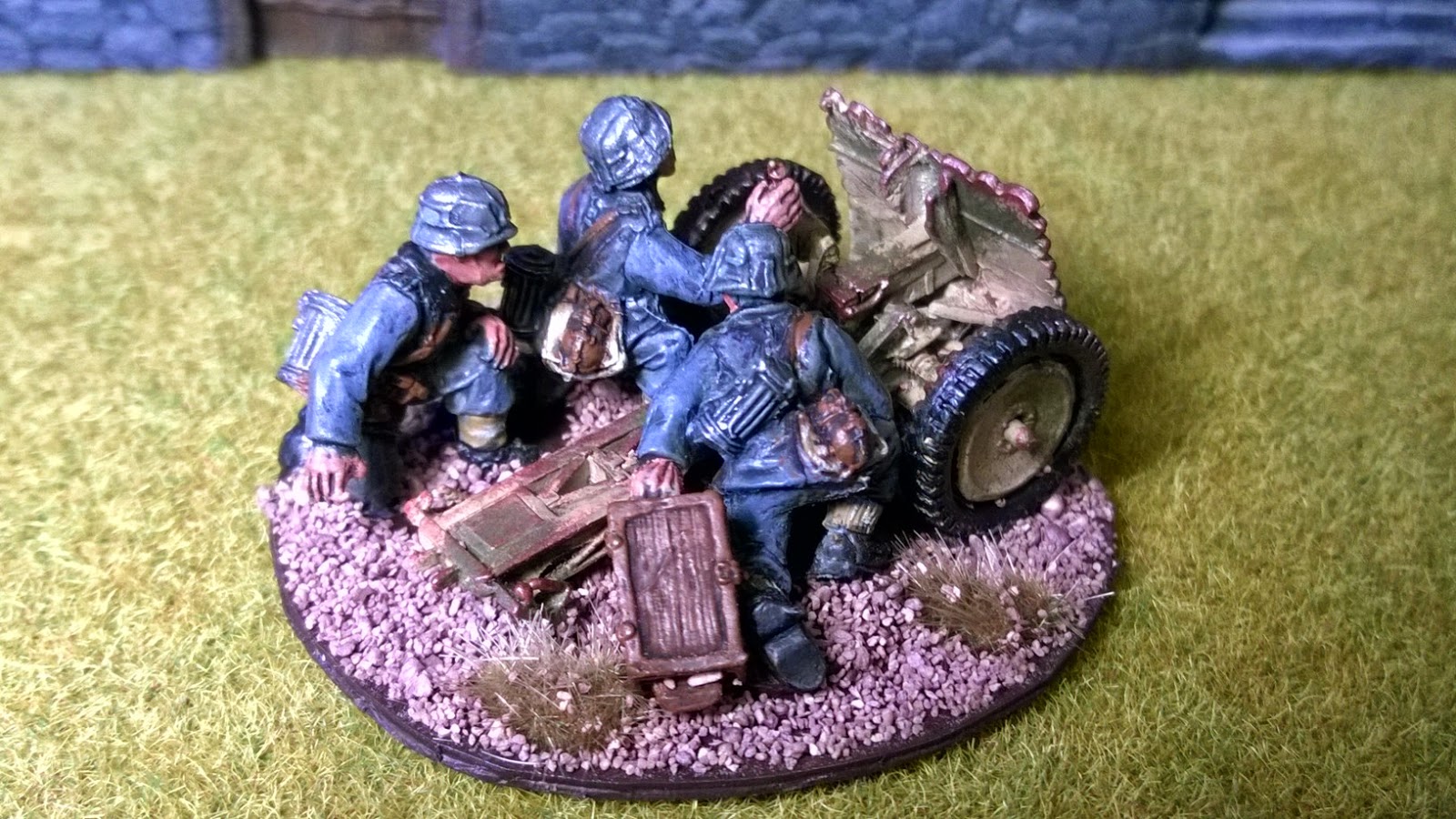 I think the reason I hadn't painted up an officer was because this guy had worked his way onto my painting desk a while back, he left me with the vague feeling that I did have a German officer painted, just a pity it turned out to be a vampire one. 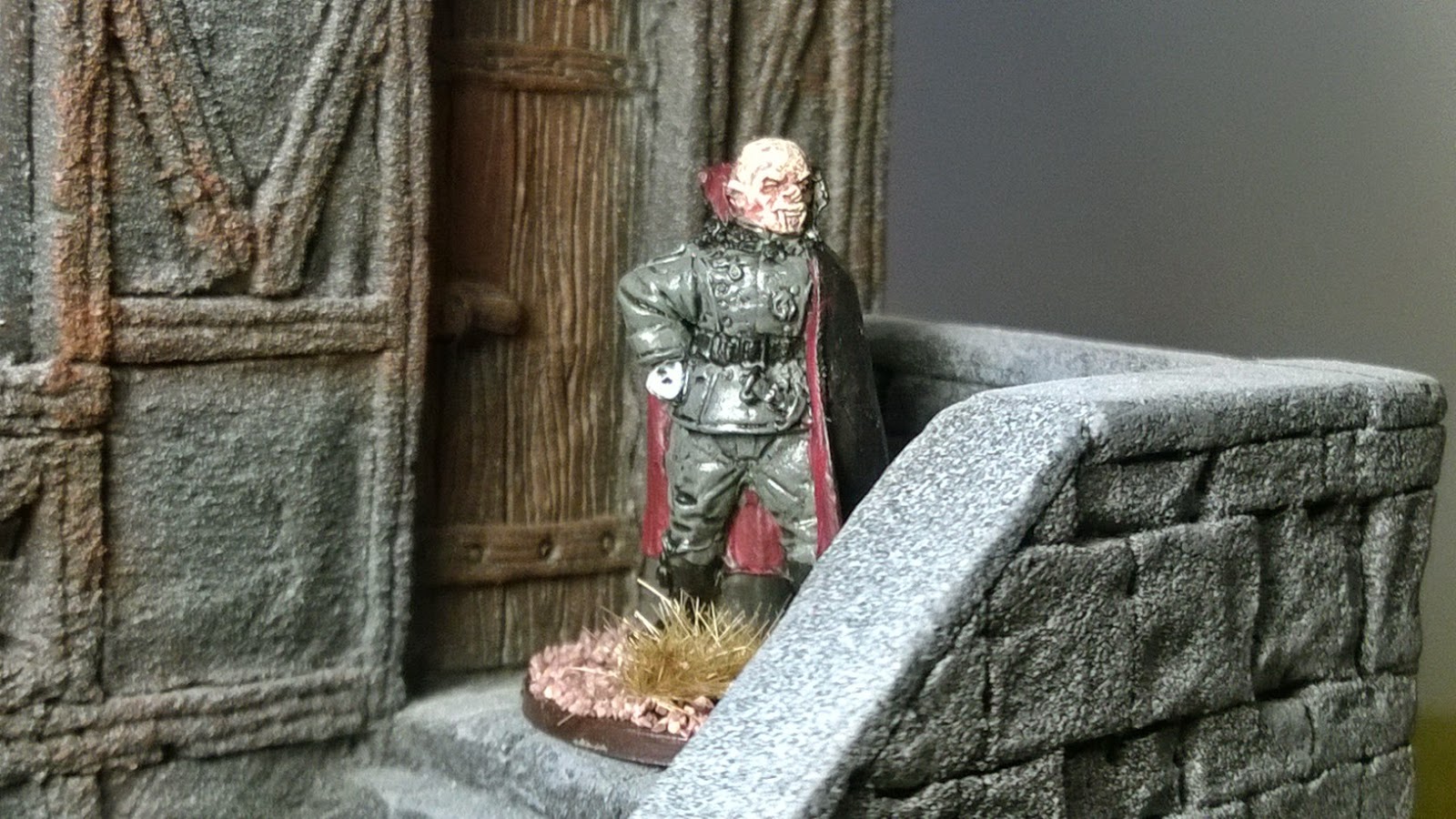 ﻿
After another busy week at work that spilled over to the weekend, my hobby time was severely limited but I managed to get some painting and gaming time in.
First up are a couple of bit of scenery I bought ready painted so I can't really claim the credit for them, but I like them so much I thought I would put them up. They are made my a German company called Ziterdes, and are made from a solid foam so they are really light. I found them in a little old model shop that I stumbled across by accident and liked them so much I had to grab them, all I have had to do to make them table worthy is add a couple of clumps of grass just to blend them in a bit. 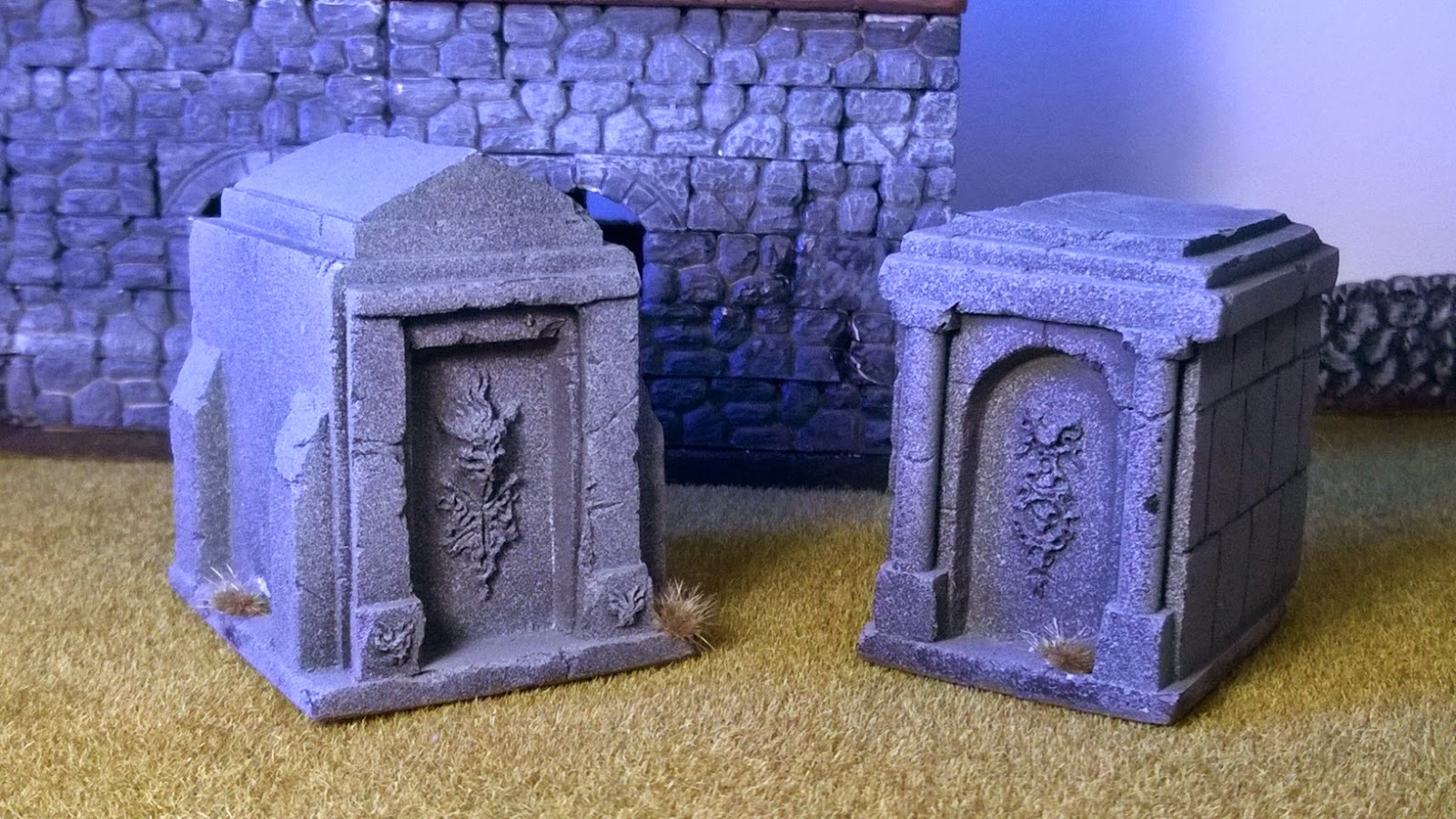 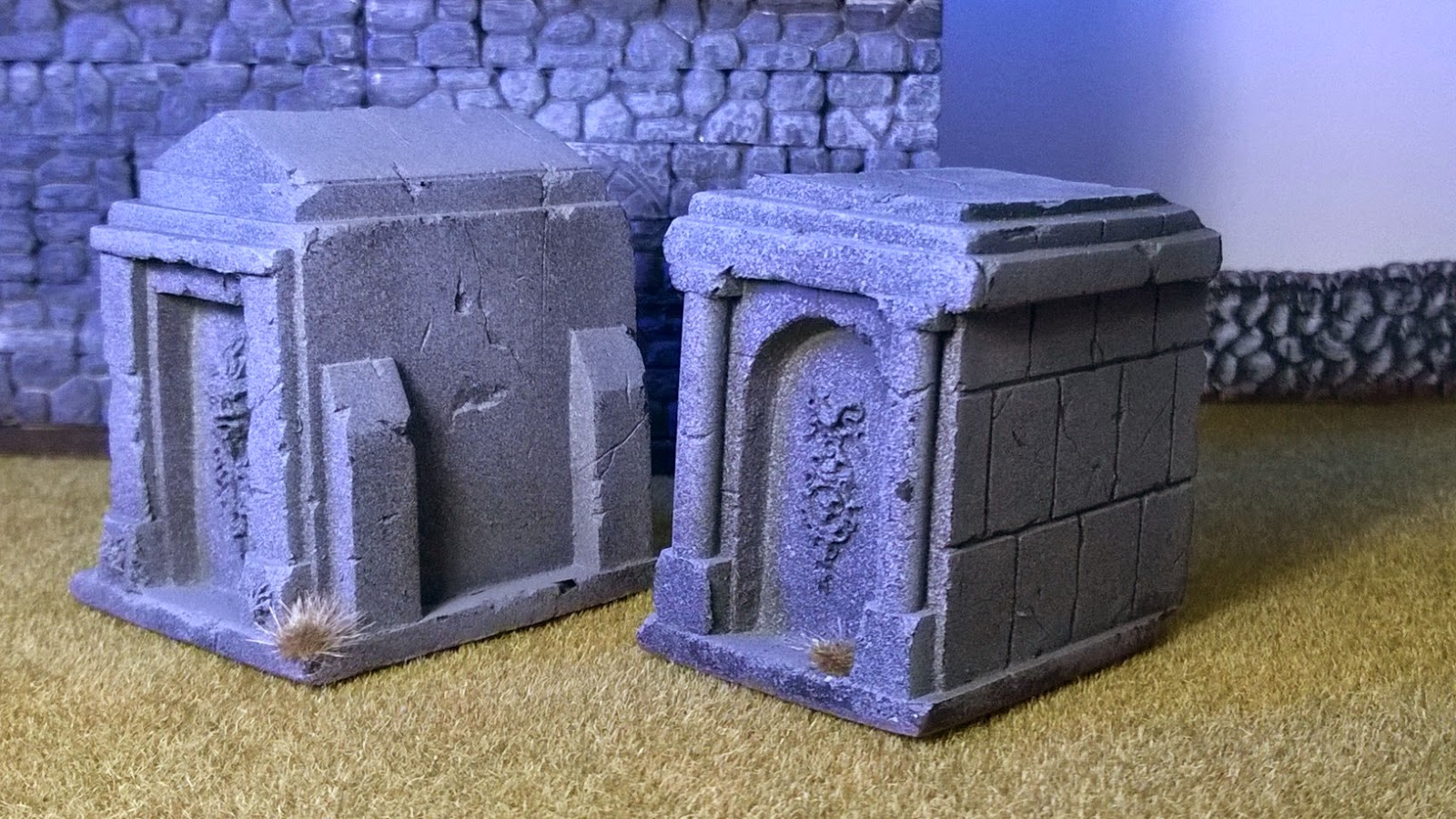 Next up is an actual hobby project. I have wanted a centre point for my planned town scenery and I have been struggling to settle on an idea I really liked, but I was fairly sure I wanted it to involve the gripping beast Alfred the great figure I bought on the spur of the moment at salute a few years back. Then I came across the components section of Fenris games' site and found the base of some kind of magical water fountain and knew I had the basis of my statue. The pillar, however, was just from my bits box and I have no idea where I got it from.
I'm not sure if its too tall as it towers over everything else I will be putting in the town, but then I suppose that is kind of the point of it. It's obviously not being maintained or looked after so it will suit any period of war I plan to put it in. 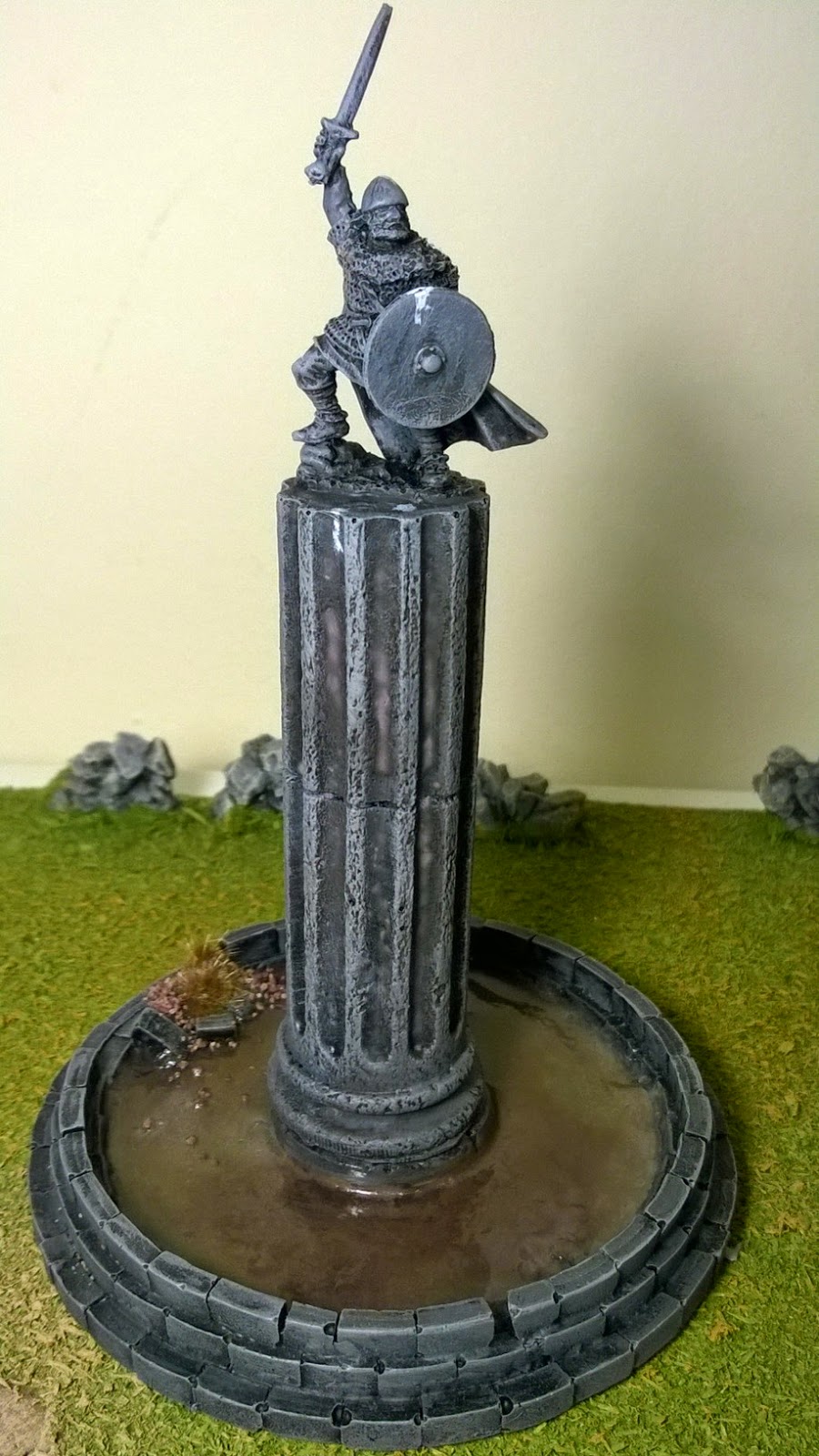 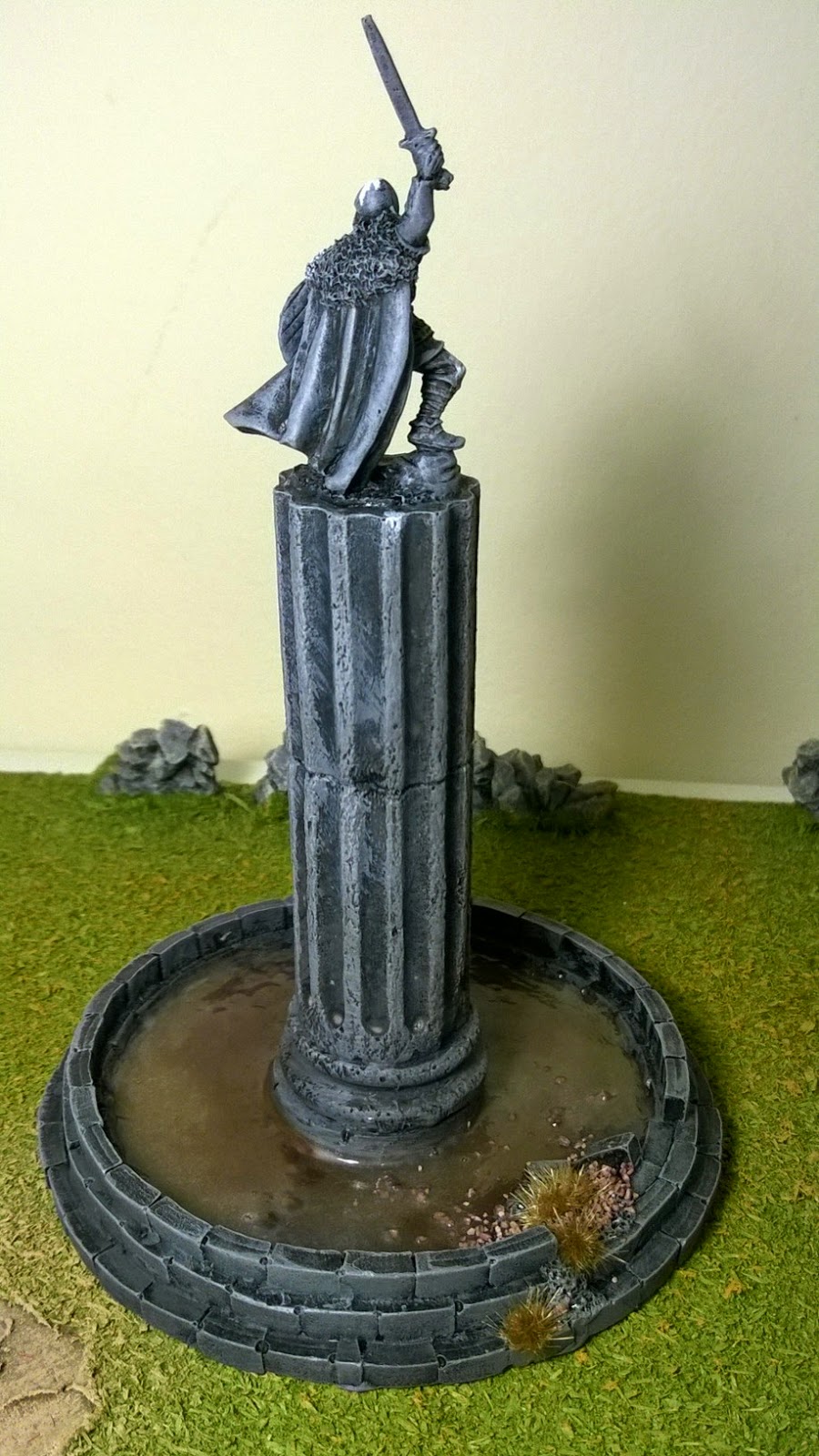 I named this post rock and roll, as it was something I found myself thinking as I carefully tried to take the best photo of my weekend's painting achievements. How did I get to the point where I would have a cart and five barrels to show for a quiet weekend of painting?
The cart is a warbases' mdf model and the barrels are from an O gauge railway scenery pack which I bought at the same railway show I got the hedges from in a post I did last month. I'm on a proper scenery drive at the moment and this is just another step in that process, filling the role of street cover. 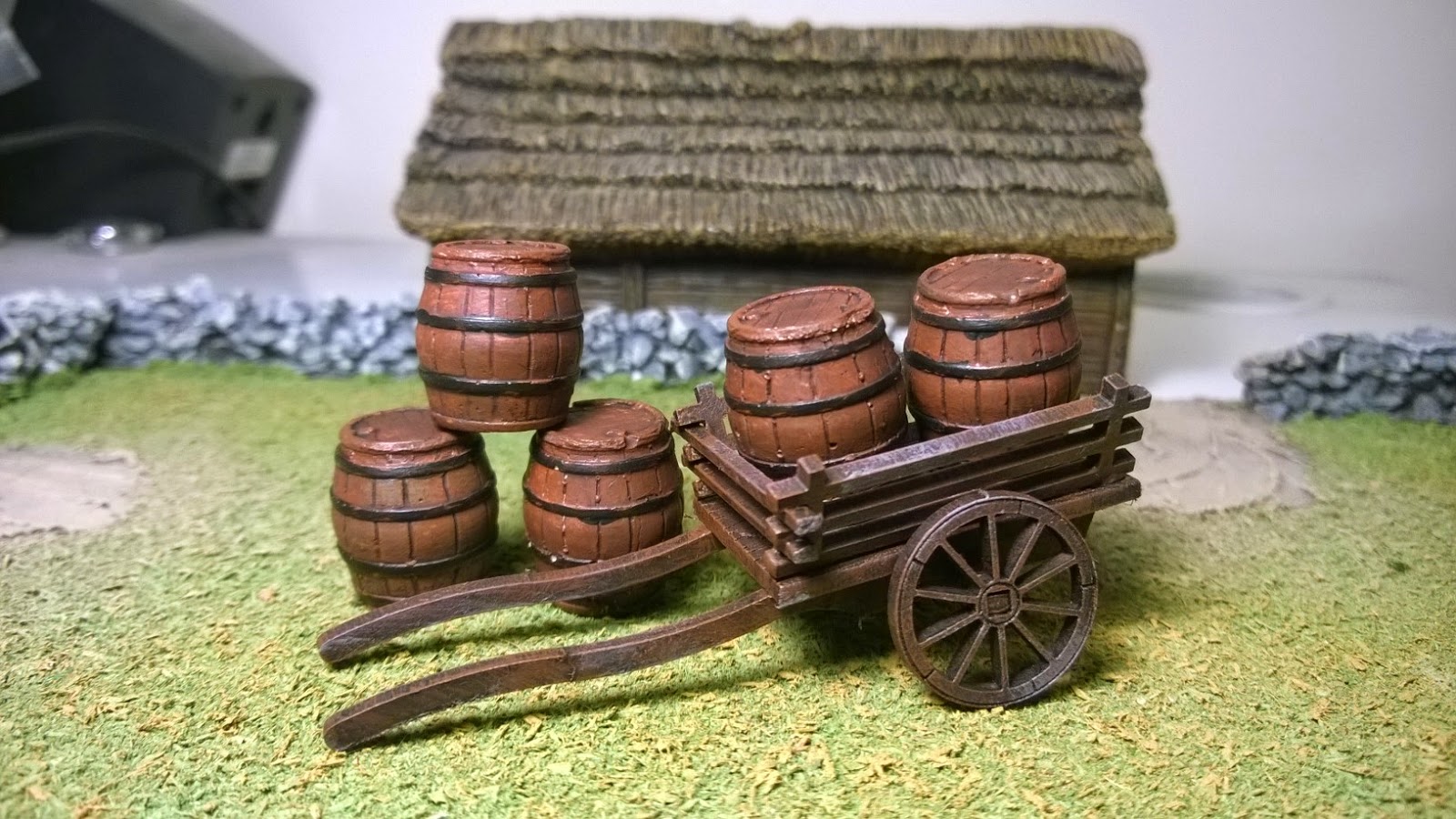 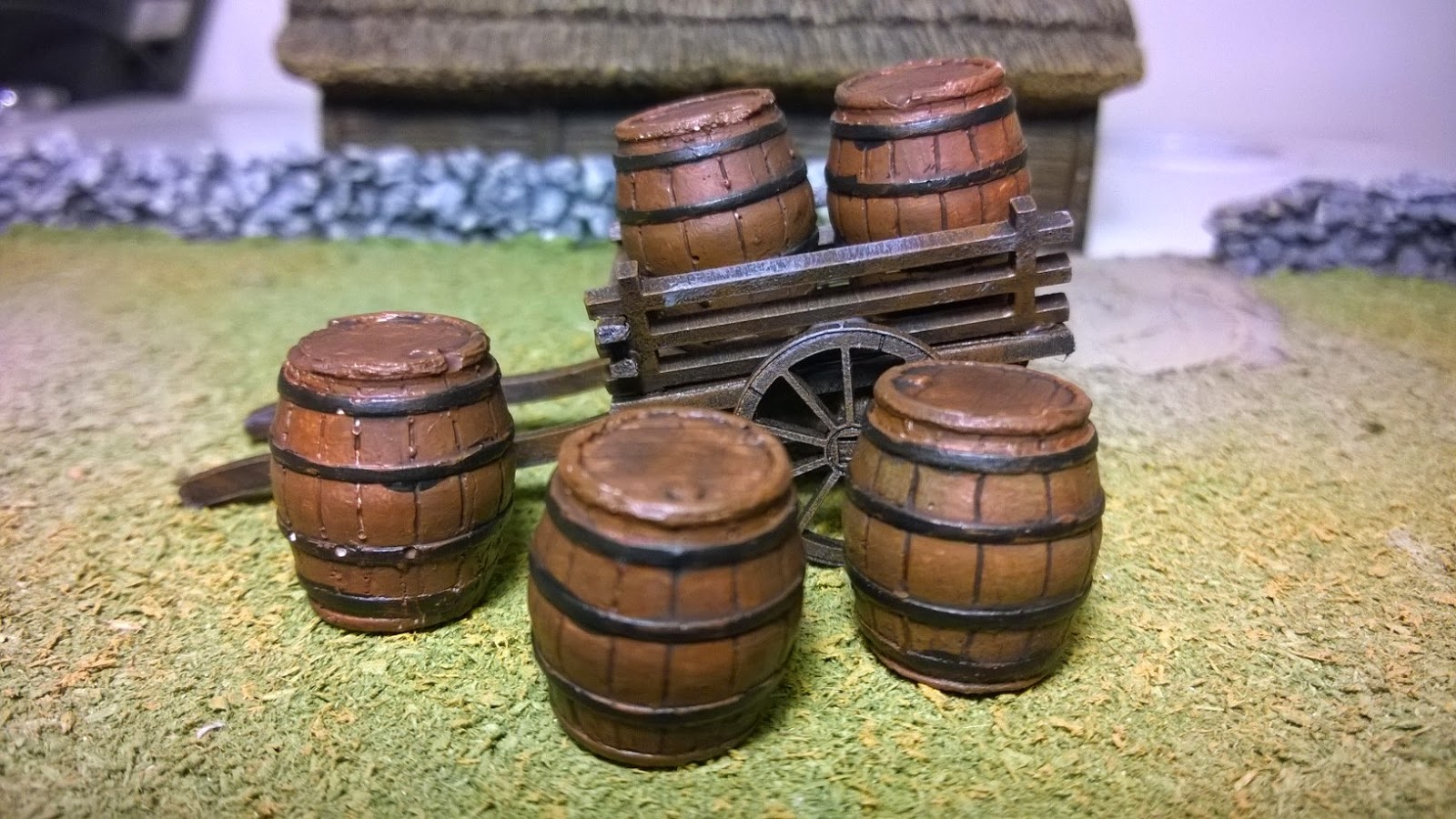 On a completely separate note, I had a play around with the way I shoot the images I use in the blog, and I think this way looks so much sharper and clearer, so I am hoping this will be the end to the apologies about terrible photography.

The models into this post aren't newly painted, so I won't represent them as such, but they are newly based, as when I painted them earlier in the year I wasn't sure how I wanted their bases to look. My current German spurt of interest spurred me to get everything ready to play with, and not just the tanks which have been taking all my time up recently.
So far, ignoring my tanks, I have 2 squads of infantry, a panzerfaust team, a medic and an armoured car finished. All I am missing is an office of some sort and that will be a minimum platoon plus a few extra toys to play with. 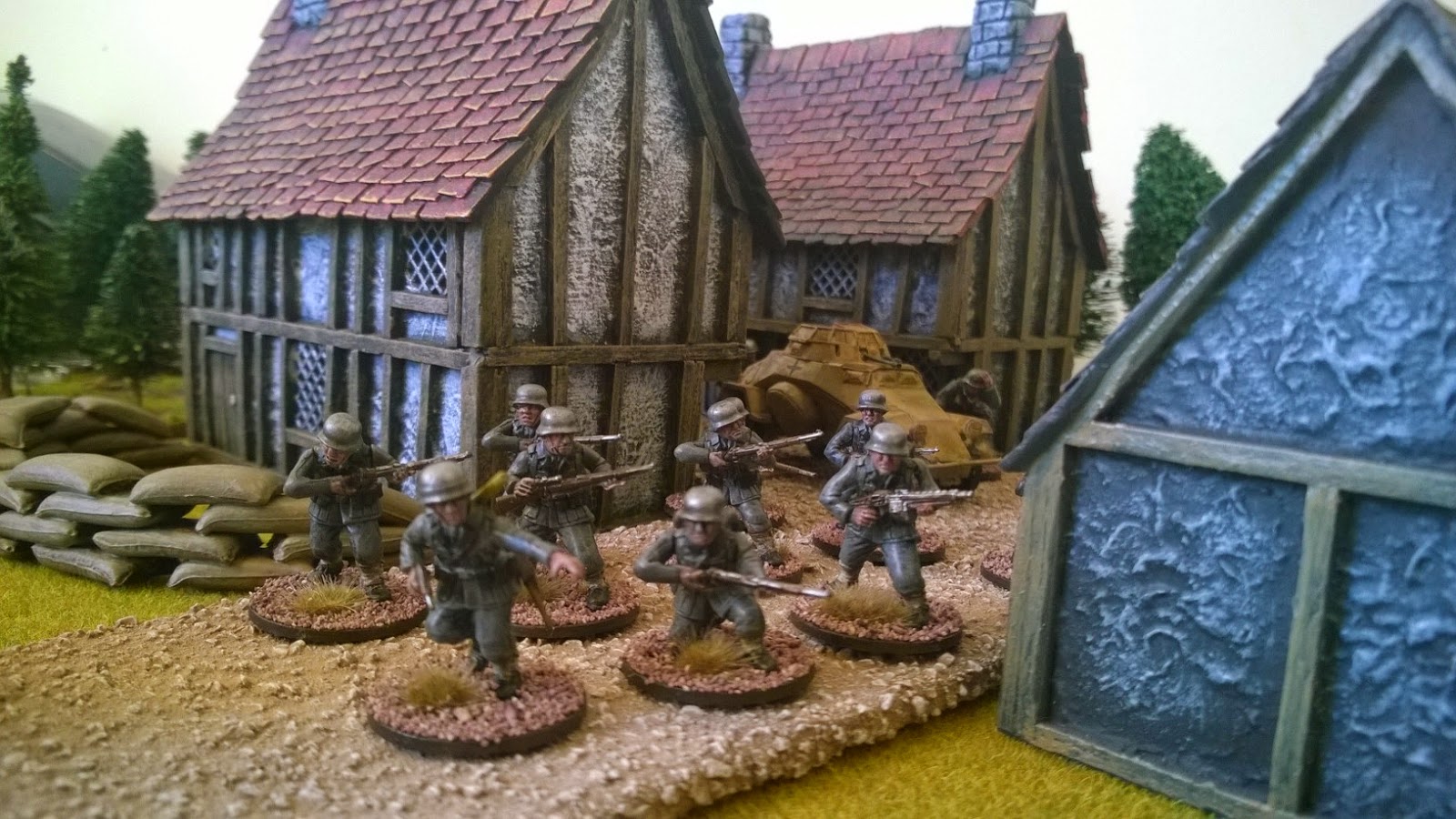 The Germans advance through an, oddly British looking, village constantly on the look out for the allies. 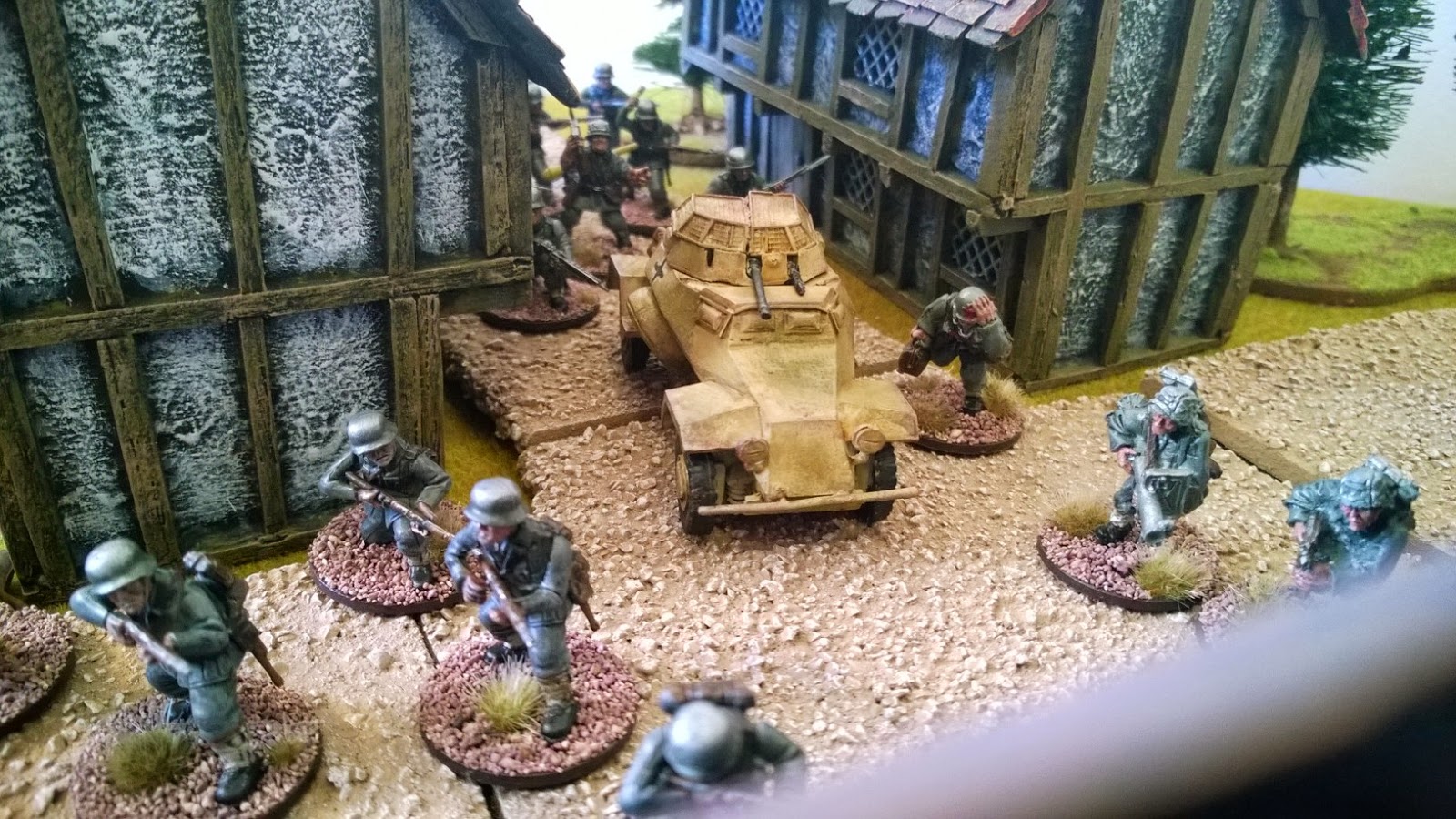 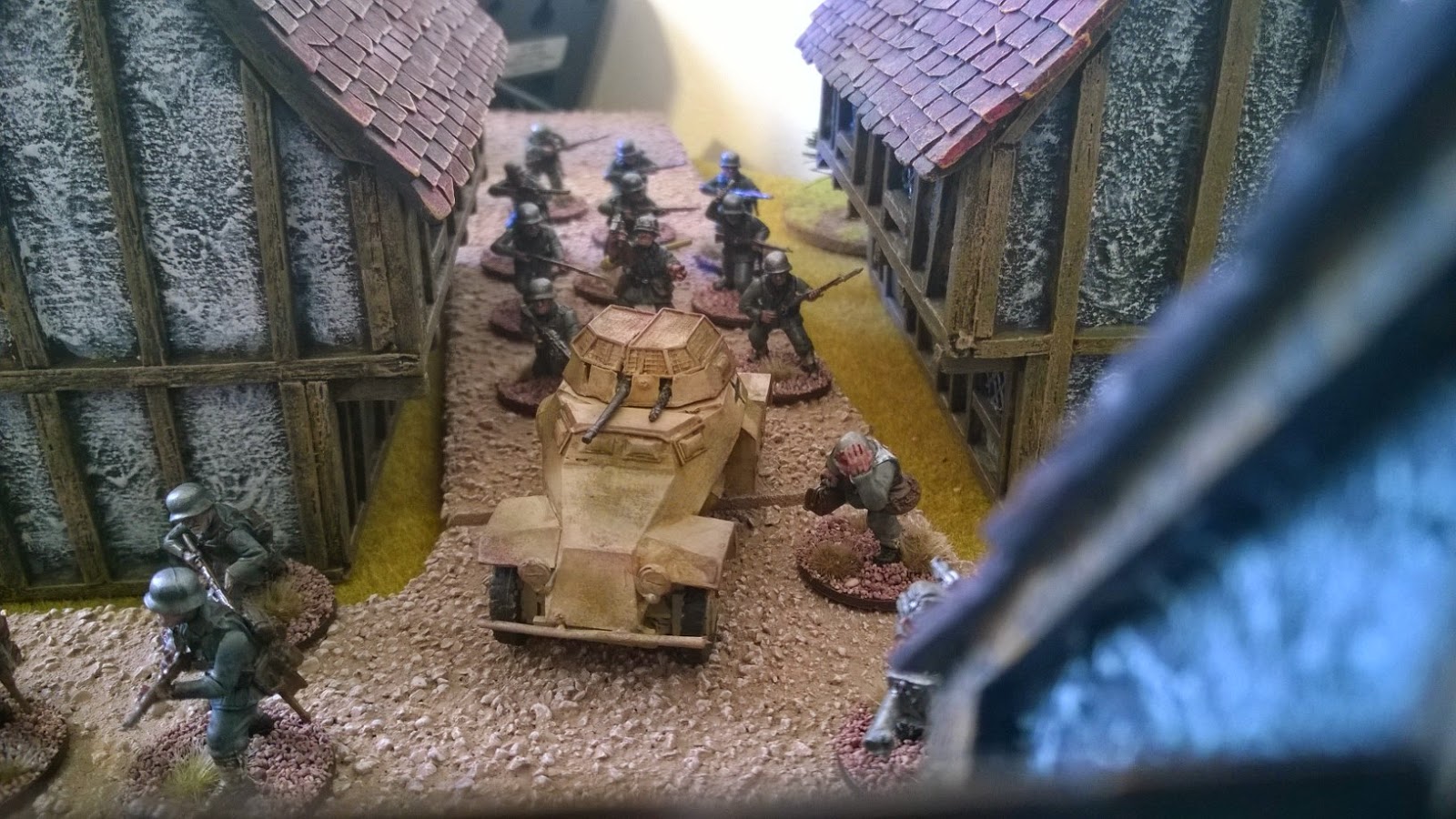 Now back to the painting desk, I have a lot more to get finished as a big parcel of unpainted PMC buildings turned up in the post this week, and I want to get another squad of infantry painted up.
Posted by Mike C at 12:17 No comments: