The second platoon for my Imperial Guard regiment is set up exactly the same as my first platoon, 3 squads of 10 (vox and grenade launcher) and a 5 man command squad (vox and heavy bolter). I'm not trying to do anything clever with my basic troops*.

* I am saving that for
my interesting units. 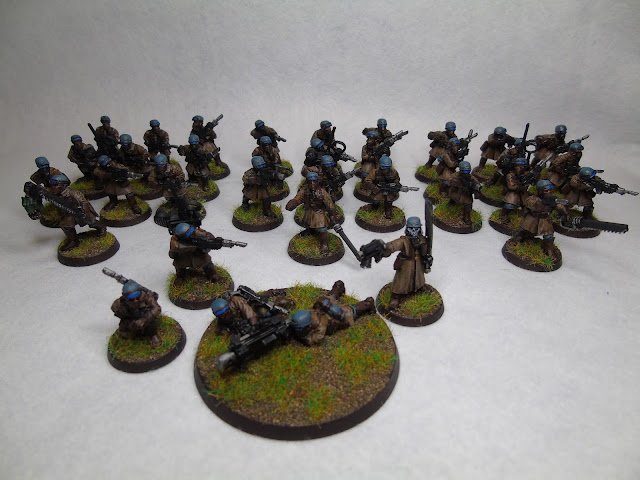 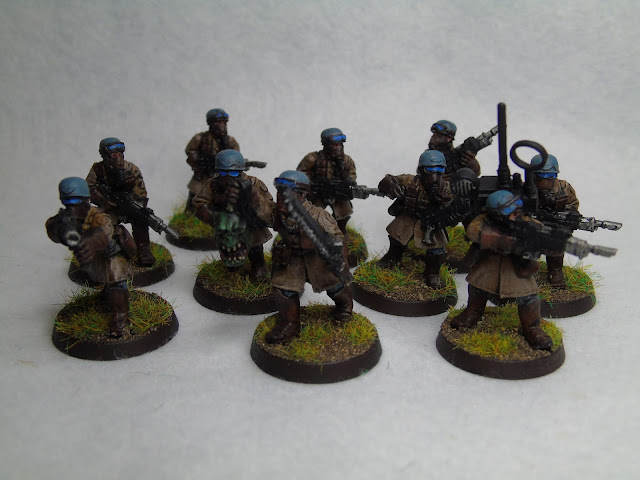 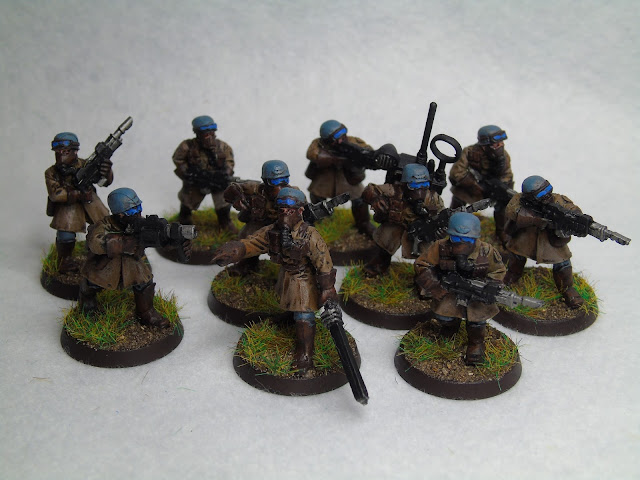 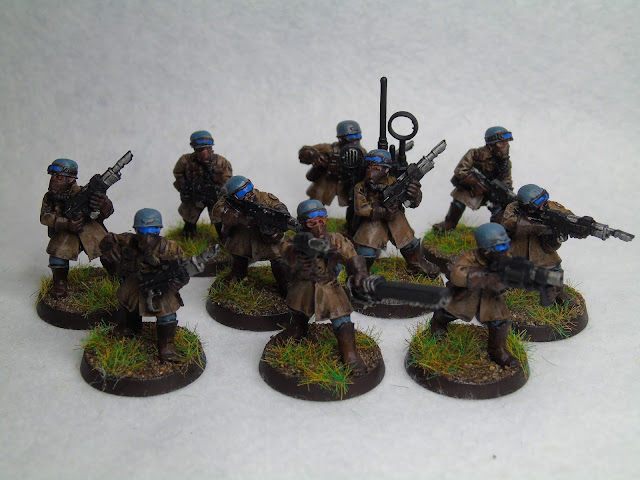 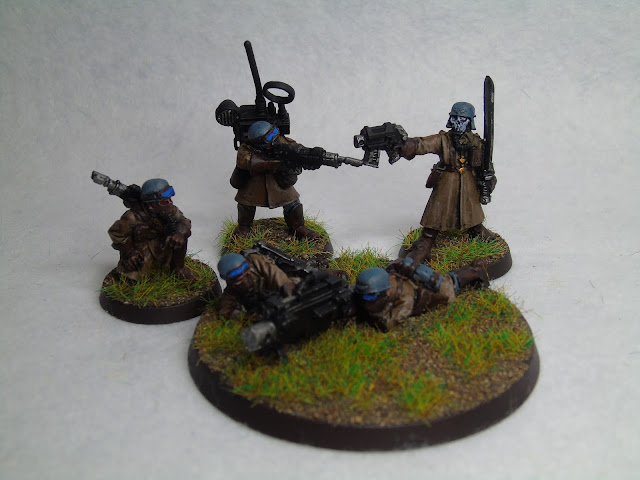 That should be the hard slog done, my painting table should get a bit more interesting over the next few weeks as my troop types will start to vary a bit more and I can fit models from other projects back on again.
The one thing I have learned from this project is to make my painting batches smaller - in past projects I have been painting up to 20 guys at a time, which saps your motivation so quickly, but doing 5-6 in a go gives you the win of completing something more often and keeps your queue moving quicker.

Carrying on from a post I did a couple of years ago about painting up some Imperial Guard tanks*, I have added a couple of support tanks to my fledgeling army.


*It's interesting to see how I've changed
my blog style since then. 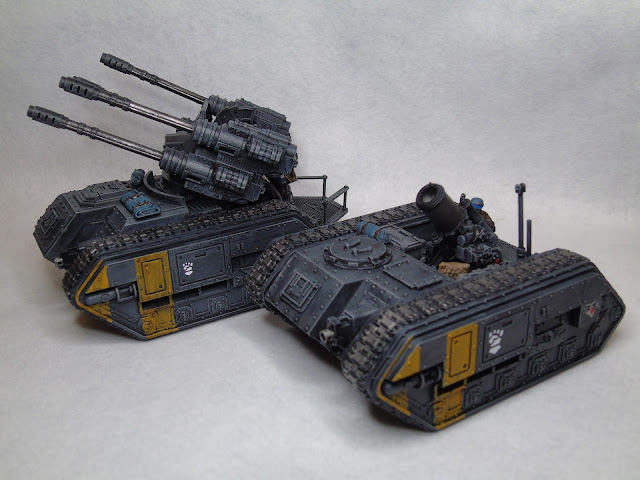 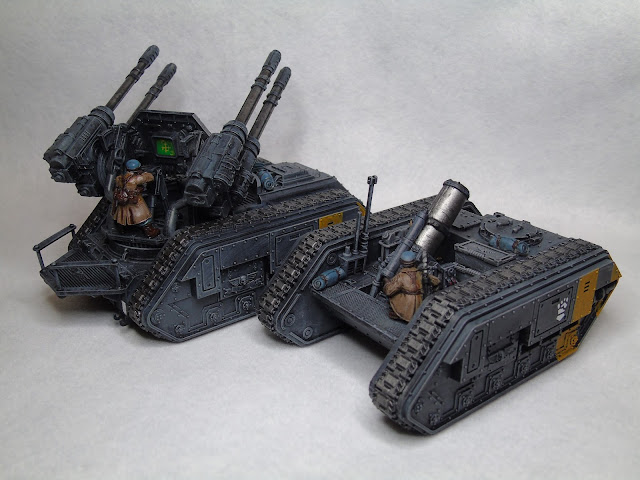 The first is the Hydra, the best AA tank in the Imperial Guard. This tank was a must as I know my planned regular opponent has a platoon of drop troops all mounted in transport aircraft and with a couple of gunships to escort them in. One hydra may not cut it but it will give me a fighting chance.
As the kit is designed for a Cadian looking force I have had to convert up a new gunner that fits in with my force, in this case; it is the top half of a lascannon gunner and the bottom of a Cadian officer. The coat is slightly too long but he doesn't look out of place, which is the important part. 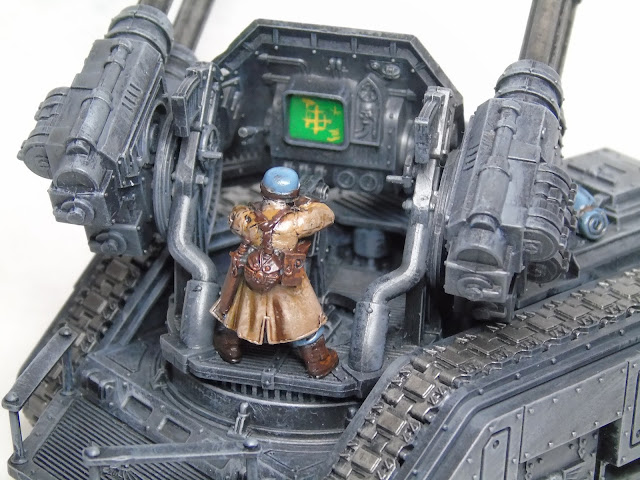 The second tank is a Griffon, a mobile mortar tank. This one takes a bit more explaining. I bought the conversion kit on ebay with the plan to use it as the base to convert a Salamander command vehicle, which Forgeworld stopped making a few years back, but when I had the kit in my hands I realised it was nearly as old as my youngest brother** and cutting it up just felt wrong.
Again, as an open topped tank the crew had to be replaced, in this case; the loader from a missile launcher team, although, I might add a second crewman in the future.
By all accounts this is a terrible tank both in the fluff and in the game but it fits with the mobile nature of my regiment and I am looking forward to seeing what it can do on the table. 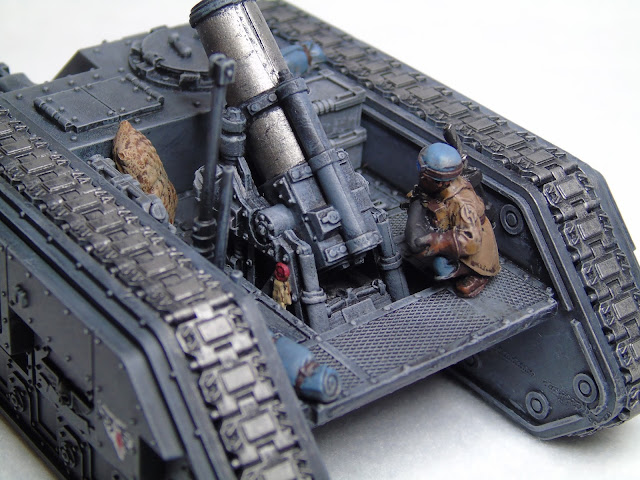 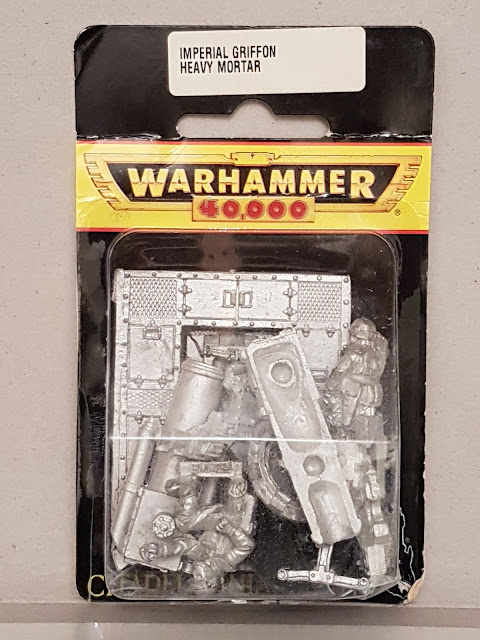 Last up isn't the tank at all, but the crewman. Back in the same blog post I linked to earlier, I posted about a Cyclops demolition tank that I had picked up on a whim and I mentioned that I didn't have a controller for it. Well now I do.
The body is from Victoria Miniatures and is supposed to be part of an artillery crew, but with a simple head swap and a few extra pouches on his webbing he fits into my force, (again his jacket is a tad too long). 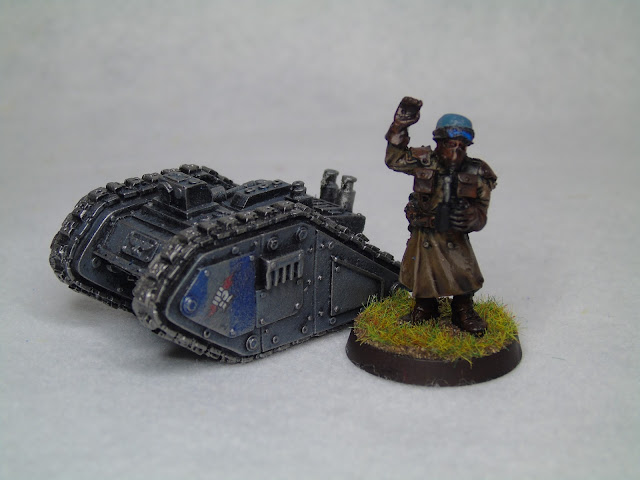 In lieu of a painting post, I thought I would do a post on a recent revelation I have had in my gaming life. I was not a fan of board games, the idea of grown adults choosing to play a board game over a wargame seemed like a massive waste to me and I was always slightly shocked when a podcast would talk about a great board game they had played or my club would run a board game only night. I had played Zombicide and really enjoyed it, but that's just a skirmish wargame that happens to come in a box with a board so it didn't break my theory. I had played Thunder Road and enjoyed it, so much so, I spent the next year trying to find one at a sensible price (but haven't actually played my copy at all), but, again, I could justify why I liked it away.
My real problem came when the Meeples and Miniatures Podcast kept talking about board games and did a long episode on the Thunderbirds Board Game a good while back, as I am essentially a weak man when it comes to the new shiny toy. I figured this would be the perfect game to see what all the fuss was about. 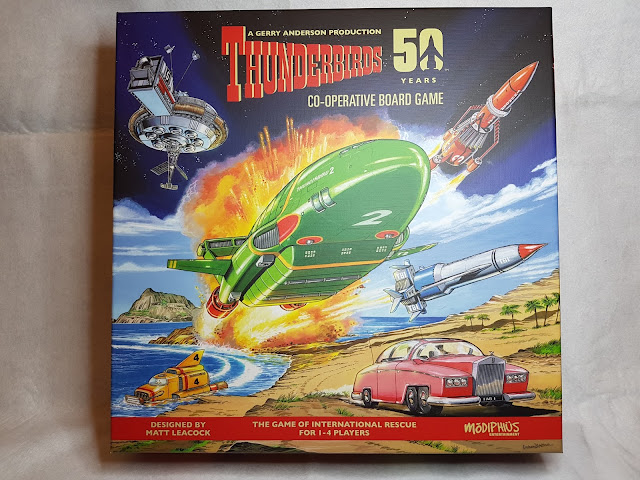 One of the guys I used to meet up with quite a lot has recently had a kid with his wife, and this has obviously changed his priorities and slashed his free time, but we have been planning a way to get him time to play games and look after his daughter to give his wife some free time, Thunderbirds seemed to fulfil the brief.
The first outing of the game was played at Wayland Games without his kid, just to give us a chance to get our heads around the rules, although future games will be played in one of our front rooms. The game itself looked really complicated when we were first trying to set it up, but halfway through our first game we had the hang of it and were really enjoying ourselves. We realised we had played a few rules wrong in our first go - which was the ultimate reason we lost that game - so second game we played it correctly and the game really came alive. The idea of playing a co-operate game versus the game itself seemed counter-intuitive, but it really does work. The game throws multiple problems at you which can quickly become overwhelming and those are just the distractions designed to stop you fulfilling the actual game objectives. 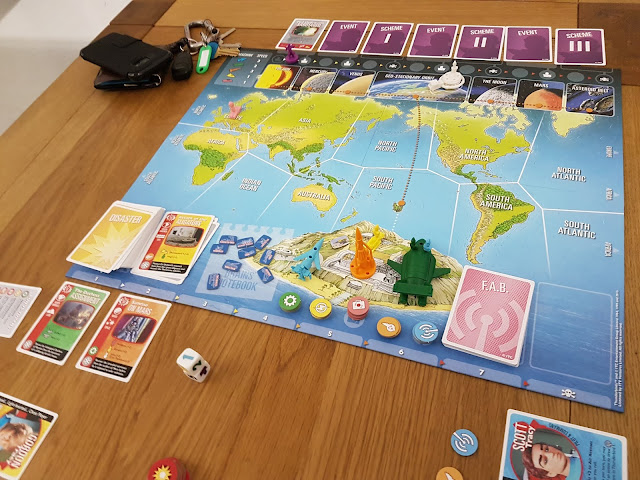 Midway through our first play - we hadn't realised the first scheme card should have been face up. . .

I am converted, it's as simple as that. Going forward my gaming time will definitely include at least some dedicated board gaming time. 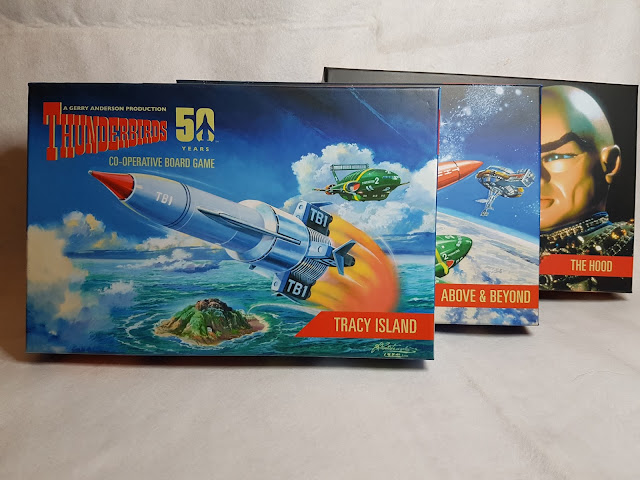 Email ThisBlogThis!Share to TwitterShare to FacebookShare to Pinterest
Labels: Board Games

As I mentioned in the round-up blog, the start of this year looks like it will be dominated with 40k. Over the course of multiple conversations with my normal gaming mate, we have both talked ourselves into a state of nostalgia for a time when 40k was exciting and, while not balanced, not yet dominated by power armies.

This led to me digging in my lead pile for my old metal Steel Legion Imperial Guard that must have been some of the first figures I ever bought from GW and adding loads more to my Christmas lists. A couple of purchases to fill in the gaps later and I was on my way.

The first platoon of the Hervictus 14th Mechanised Infantry*.

*More on the mechanised
part another day. 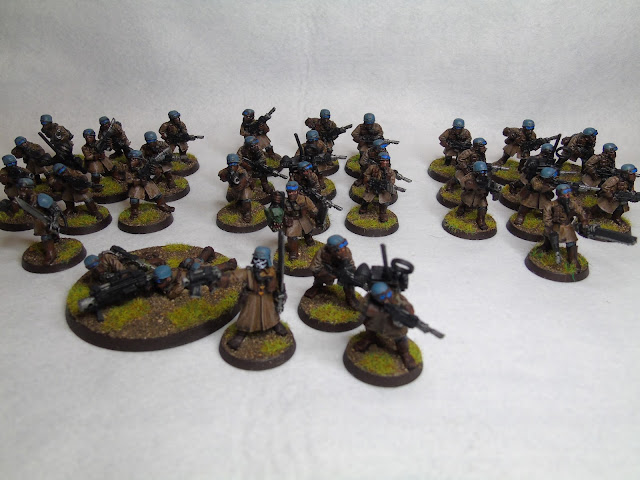 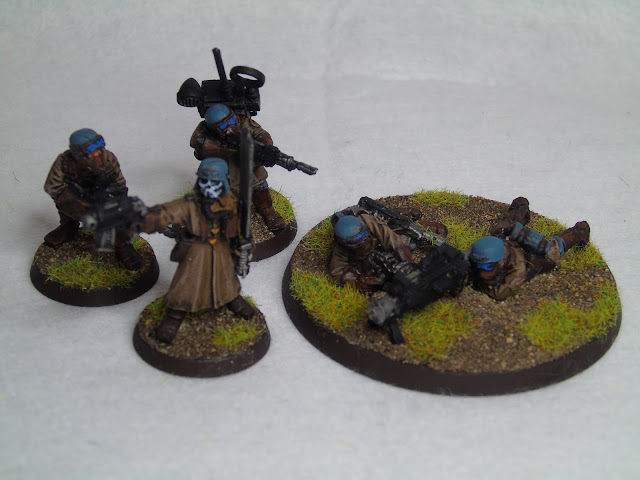 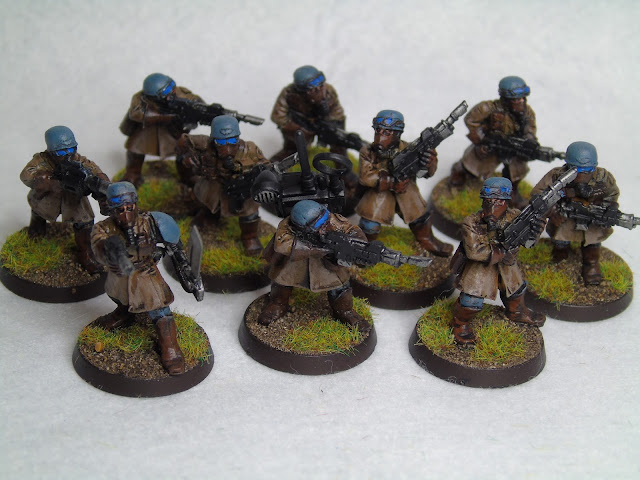 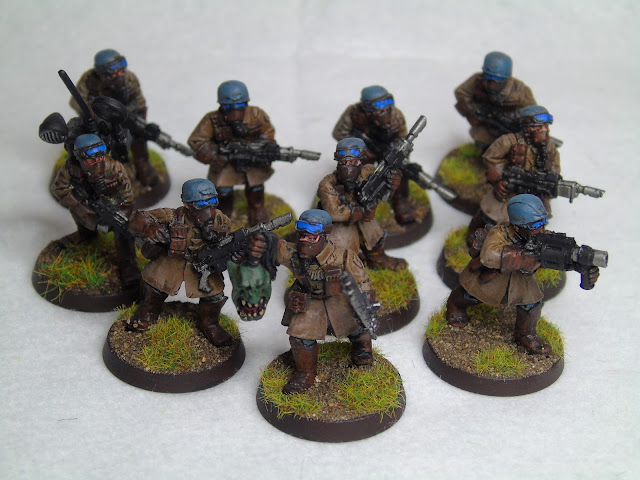 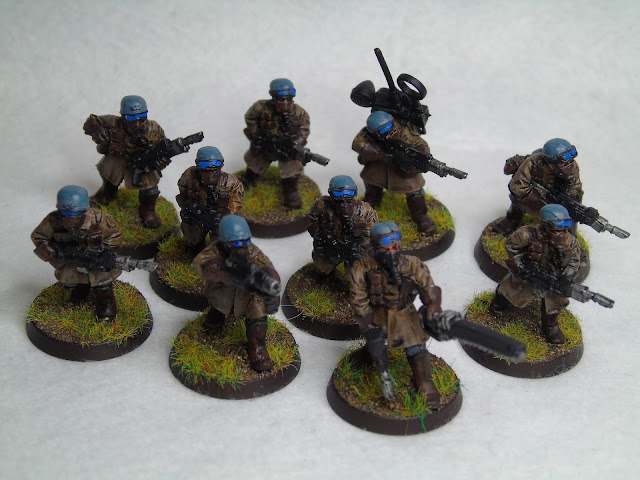 Only another infantry platoon, a heavy weapons platoon and command odds and sods to go . . .

2016 was a weird hobby year for me, with my lowest game count since I got back into the hobby properly after finishing university, both in terms of games and rulesets played. I have moved my gaming night from Wednesdays to Mondays * and am generally only playing the same guy, which has all the benefits and negatives that you would expect.
I thought, this year, I would do a photo round-up instead of throwing stats at you all. I have gone through my phone and this blog and found what I think are some of my best in-game images from this year.


* For some inexplicable reason
Mondays are easier to keep? 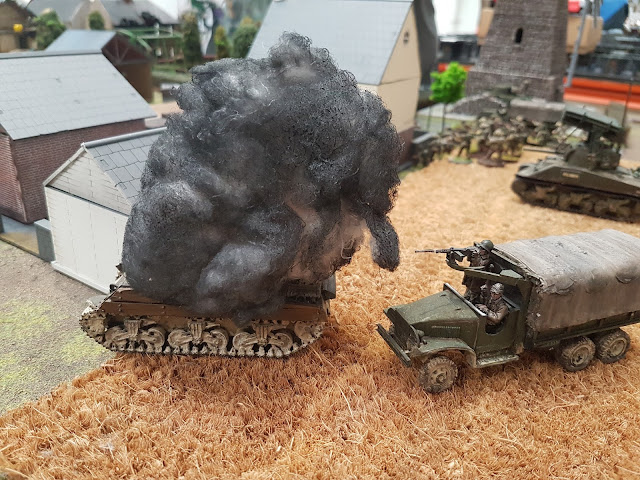 Bolt Action was my most played game in 2016, although it trailed off a bit just before version 2 arrived and hasn't picked up that much since, with other games taking our gaming time up. 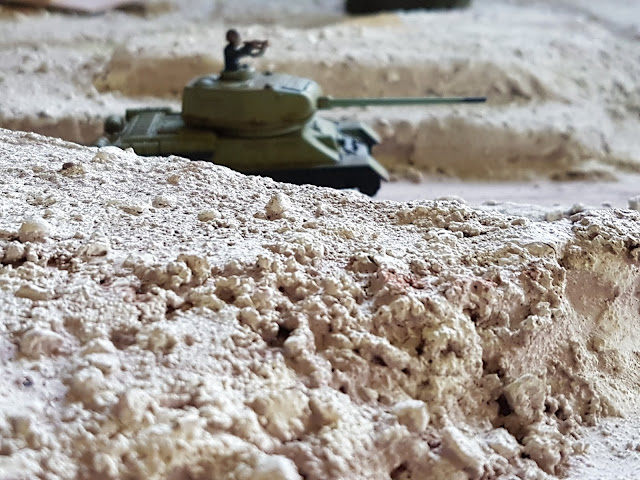 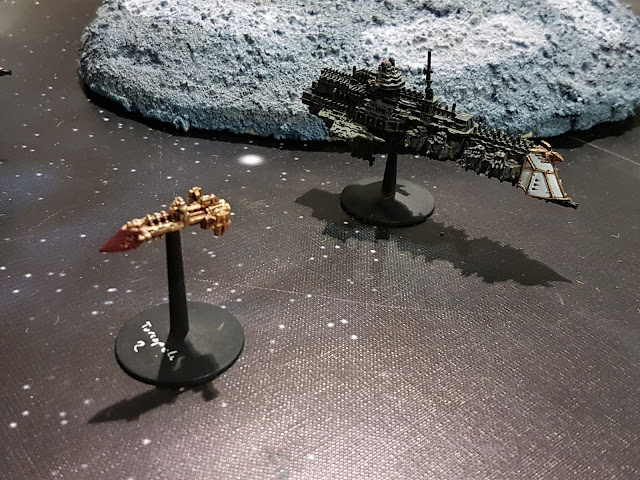 40k and Battlefleet Gothic have both snuck into my games played in 2016, with a lot more planned for this year. Early 2017 is going to be very 40k heavy. 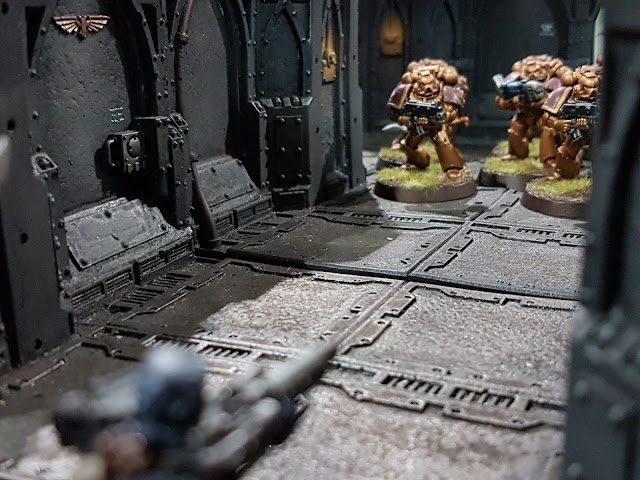 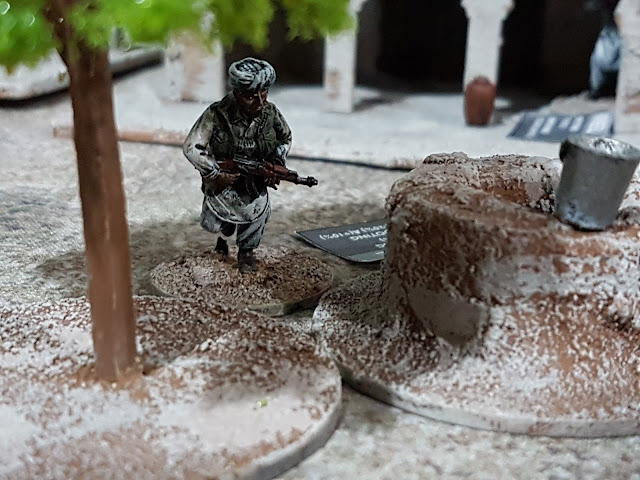 Sangin Skirmish has been another staple of 2016, never quite being my top game but sprinkled in enough to be a regular feature and the one we have invested the most hobby time into. 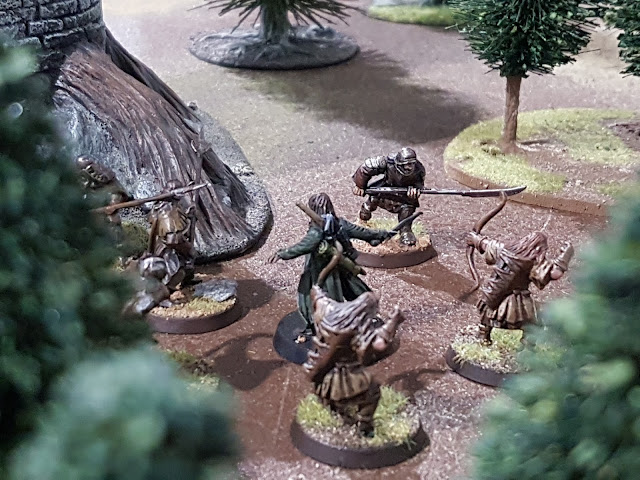 I even managed to convince my mate into playing some Lord of the Rings too. Still one of my favourite rulesets of all time and I game I always mean to play more of. 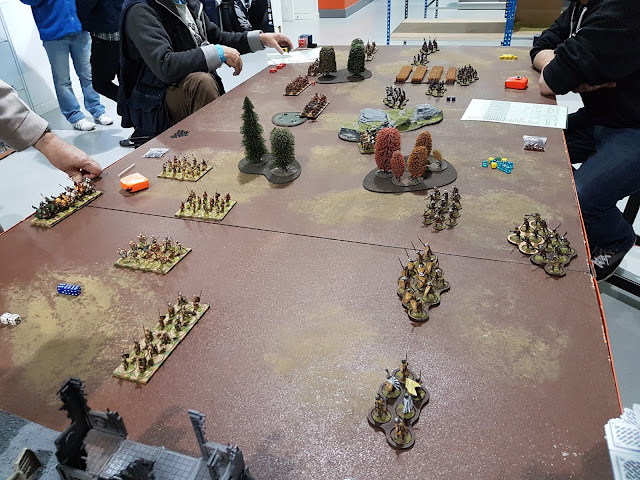 My only game of Lion Rampant in 2016. Another game that I really should have found the time to play more of.