Hot on the tail* of the last of my** Union cavalry are the second and third units of Pennsylvanian Zouaves. It's been quite good fun painting mass cavalry but going back to batch painting fairly simple, identical uniforms is a joy all of it's own, so I'm a little sad that this bit of the project is now over for a while, however, the next project or two are already lined up and raring to go, so I had better get on with it.
The banners are something that I've also found quite satisfying with this whole ACW project. I've tried not to add too many as I don't want my armies looking like a few men taking a flag for a walk, but the Zouaves felt like they deserved their own colours and as they could be bought online, it was too good a chance to miss up. 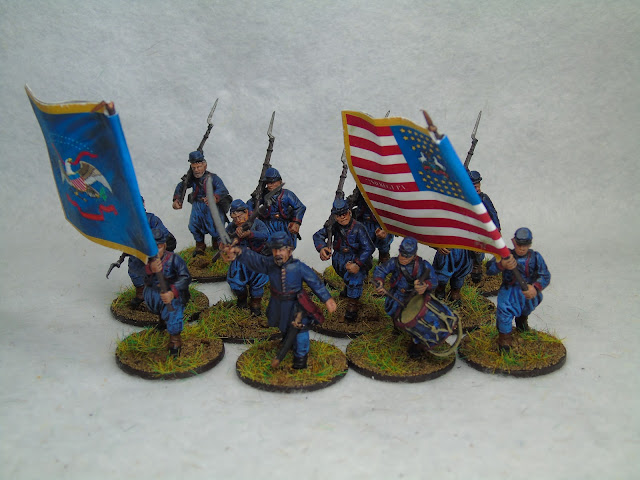 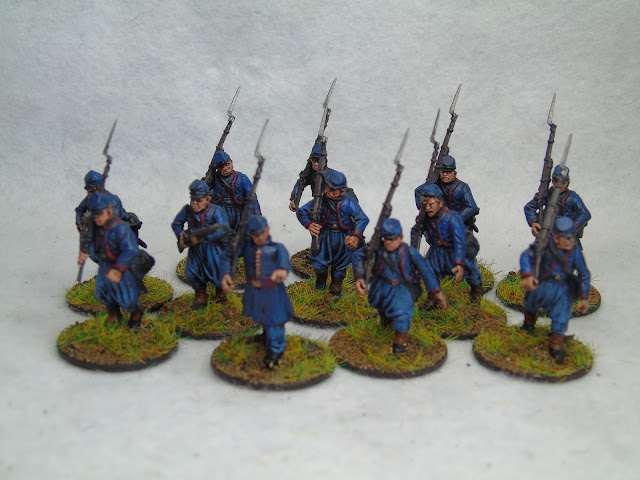 Adding to the herd

When I built my first two units of cavalry for my Union army, the idea was just to have a couple of light units to harry flanks but now I have 4 units it feels a bit more like a substantial force, so I built the very last unit with a banner and bugle.
Otherwise, the horses were painted in the same batches as the gun limber horse team and the 3rd unit of cavalrymen to match. Together the 4 units and the cannon with full horse team and limber come to 24 points, which is the recommended points level for Rebels and Patriots, so I'm very tempted to see what a fully mobile Union army can do on the board . . . 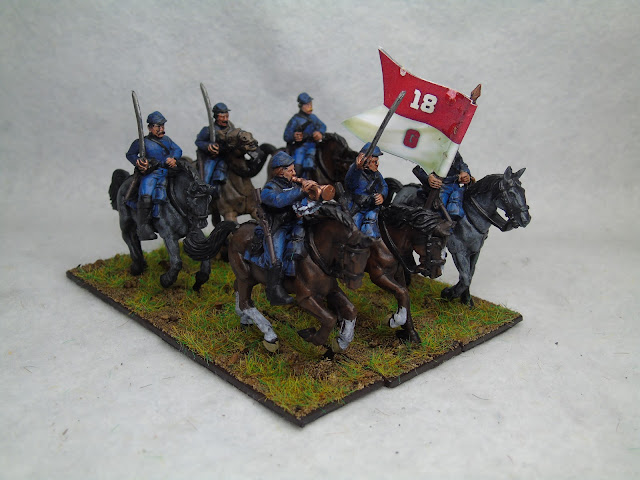 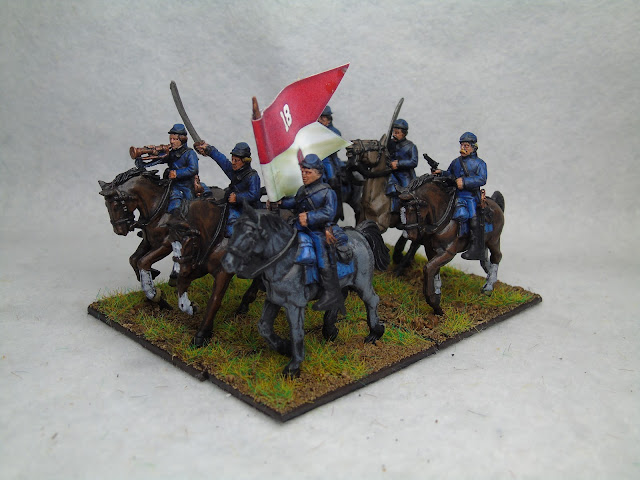 And now for something different, my Confederate Ambulance from Perry Miniatures. While the initial project was supposed to just be a 24 point Union force to try Rebels and Patriots out in the ACW period, the spiral into 30 point forces for both sides was fairly inevitable. However, as the recent push has all been for my Union forces, I didn't want the Confederate side to look like it was lacking anything. I have plans to buy another box of Confederate infantry and I have a unit of confederate cavalry on my painting desk, but I felt they needed something else in their back line and as I was placing my last order, it became obvious, an ambulance*.


*Obvious to me anyway 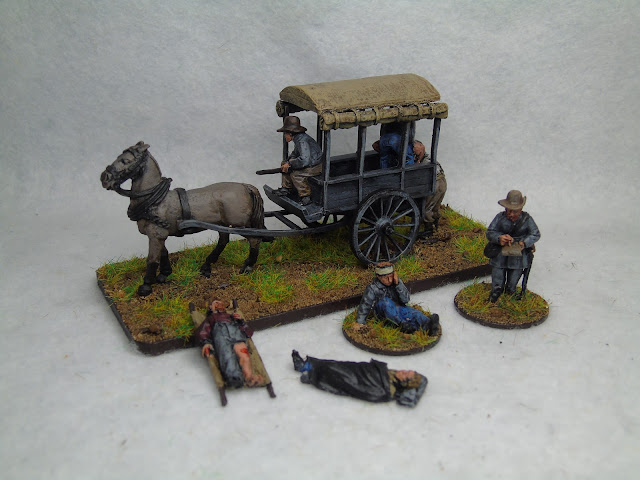 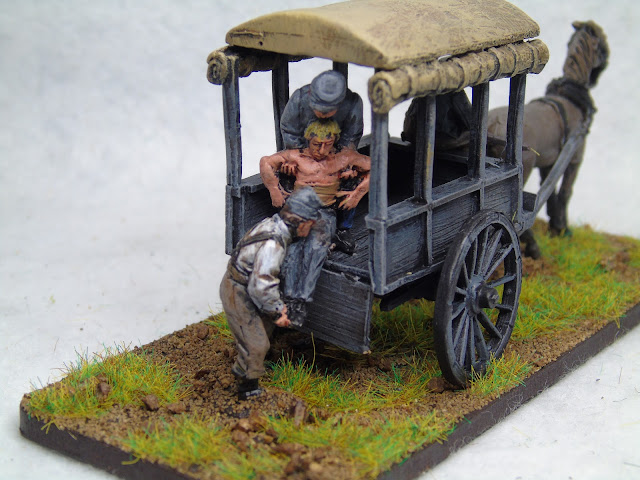 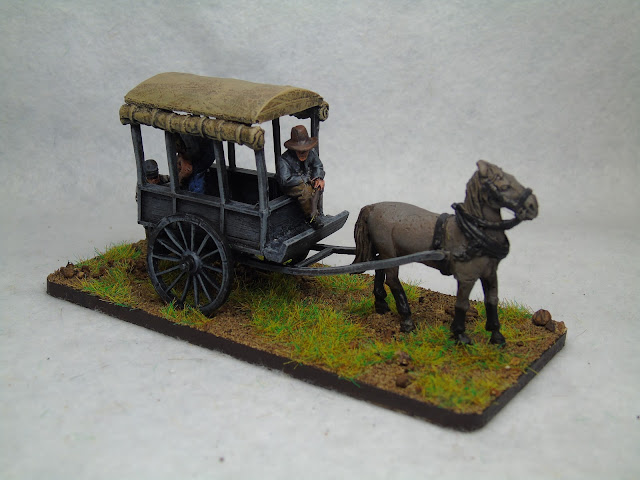 Did someone request some Zouaves?

Aside from needing to finish my cannons to set the battlefield and adding more cavalry*, there was two more things that really got me thinking from the battle report, the first was the scenery** the other was the sheer amount of units. We play ACW using the Rebels & Patriots ruleset from Osprey Publishing and I think they are a really good evening game, we currently only play with 5-6 units a side at around 30 points, however, I reckon these rules will scale up higher. So I started talking to Neil about adding another 3-4 units of infantry per side, but having them as new detachments with their own officers and banners etc. One of the things I mentioned was that I was tempted to make one of the groups Zouaves and it just happened that Neil had a few sprues of them that he had no use for, which made the choice easier.
I picked the 72rnd Pennsylvania, Baxter's Fire Zouaves, partly because they were from a similar area as my normal infantry and partly because their uniform looked fairly simple, although it turned out they wear non-Zouave hats which made building 36 of them a touch more interesting. I tried cutting the fezzes off and replacing them with spare caps but it was going to be too big a job for the amount of figures I wanted to do it with, so I bought a pack of the Perry Black Union heads that are wearing the correct hats to speed the process up. The uniform the 72rnd wear is the same colours as their regular Union counterparts but with the Zouave cut of trouser and jacket, although my photo makes the jacket look a bit brighter than it actually is.


*More to come
**Which I am working on 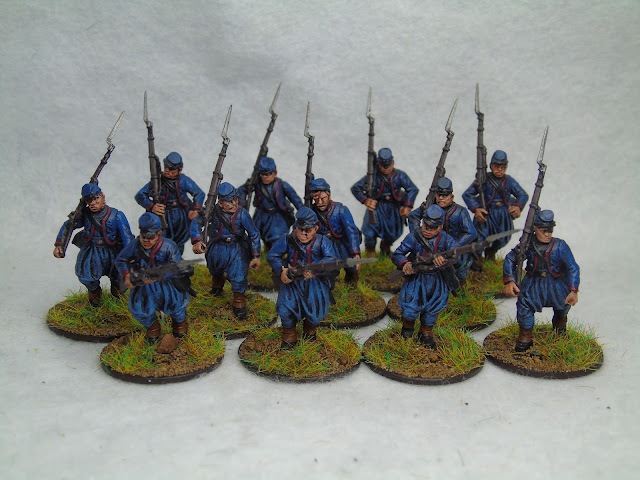 Mobility is the Key

The next few posts are all going to start the same way, 'the next thing that Jay's game inspired me to do was' and this one is no exception. So, for the second post of this particular trip down the rabbit hole I want to focus on the next unit of Union Cavalry. I already have 2 units finished, although only 1 has made it to the table so far, but seeing the long line of horses really got me thinking.
I have a real mental block when it comes to cavalry, which is why I rarely have them in my armies even though they really suit my play style, however, the last box of Perry cavalry I painted really bought it home that it is a stupid block to have, instead of seeing a unit of 6 horsemen as a single complicated batch, you have to treat them as 2 batches of 6 models, that just happen to end up being combined*. In the end, I actually painted the horses in smaller batches than that, in batches of 4-5 along with a horse or two from the limber team to cut my time, so as I write this, the horses for my next unit are already finished and just waiting on their riders. 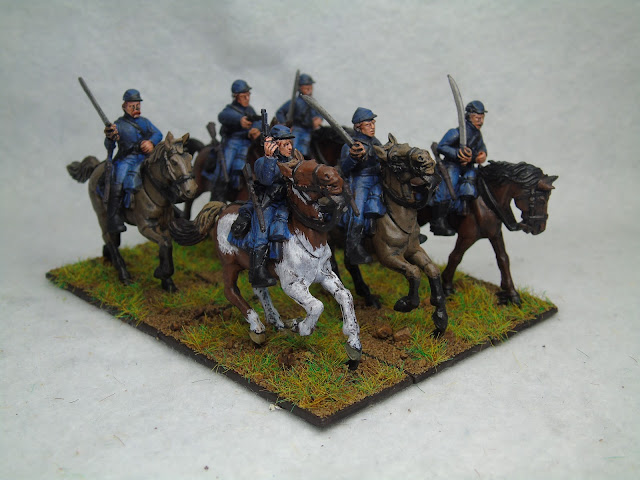 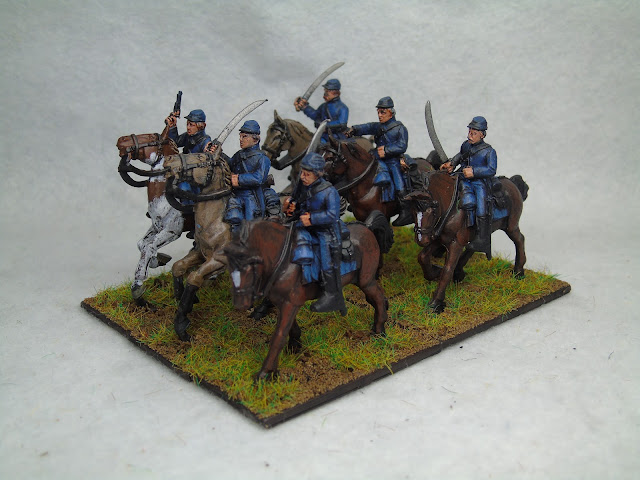