Since the start of the year, both Forgeworld and Games Workshop have been doing whole scale dumps of slow selling stock - sometimes putting them into last chance, whilst other times the items are just vanishing from the website. One of the big ranges that Games Workshop removed was their old metal Imperial Guard infantry and as I wanted a 3rd platoon for my Steel Legion I jumped the moment I heard what was happening.
I didn't manage to get all the support weapons I wanted but the basic infantry platoon's worth of men was the important part being another 41 men to add to my lead mountain*. Up until now, both of my platoons have been identical, this one will be different, however.


While I have other projects jostling for their time on my painting desk, I felt like such a big influx of new models needed to have a dent put into them sooner rather than later, so I have built and sprayed the first 25, with 15 now having been finished. So, here we have the first 10 man squad and the command team of 3rd company. 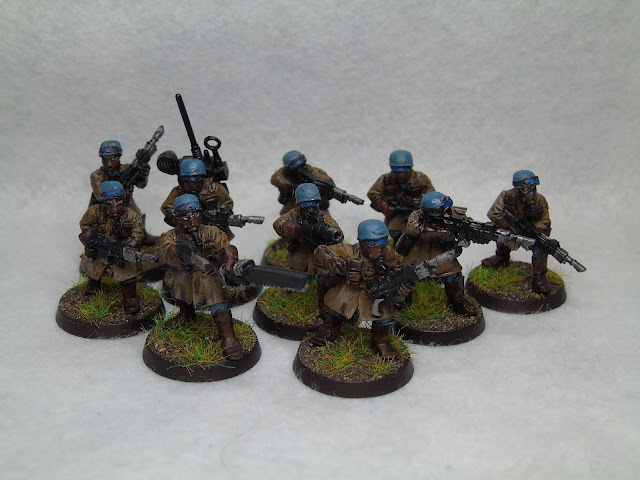 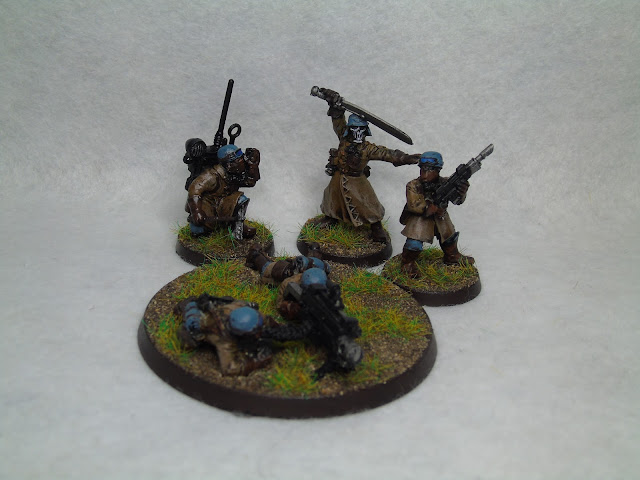 While I carry on trying to get the bases right on my jungle terrain without just ripping them apart and starting again, I thought I would turn my focus back to a more immediate project, getting the army I need for a campaign weekend in October, finished.
I have submitted my list, my background fluff and a short story (!) for my army, which means I need to build and paint what I have said I will be taking. I am short 25 models, 15 of which are from the same squad, which makes the task a bit easier, but I want to start breaking the back of it now so it doesn't turn into a last minute rush.

Up first are two characters I need, and another I just fancied building. So left to right we have: an un-named librarian, my preator Captain Bral Trabus and Captain Quinzi Devdan of the 56th company. As part of the list submission process, you need to write a comprehensive background for your army, who they are, why they are fighting etc. This is something I had already been doing but it helped focus it down into something that is tangible and feels solid. 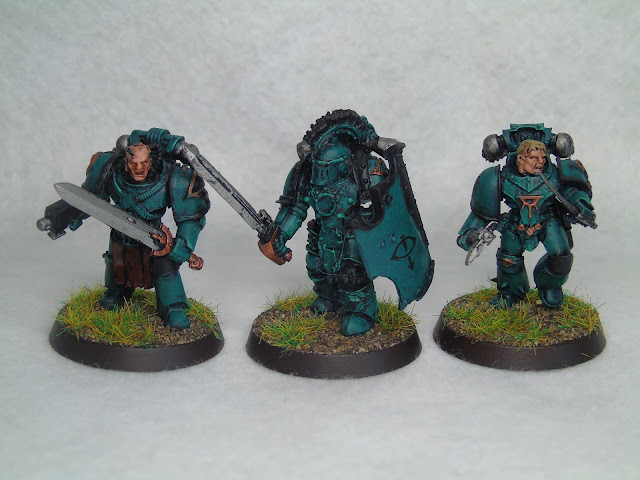 Next up are some more despoilers for my combat squad. I initially made a 10 man combat squad, partly because I could, and partly because it was this legion that invented the idea, so it just seemed right. However, 10 man squads in 30K are rarely a great idea and having no specialist weapons outside of the sgt, also felt like they were missing out on some of their capabilities.
So for the event in October, I have said I will take a 15 man squad, with two extra power swords, which meant I needed to start bulking up my squad. At this point it is worth mentioning that I am waiting on the parts to build the 5th of the new men, but the first 4 are complete. I built two with power swords, but I built the other two with World Eater chain axes, while I will get no benefits from the weapon change, they felt appropriate for my combat squad - the Sons of Horus aren't the Imperial Fists or Ultramarines. 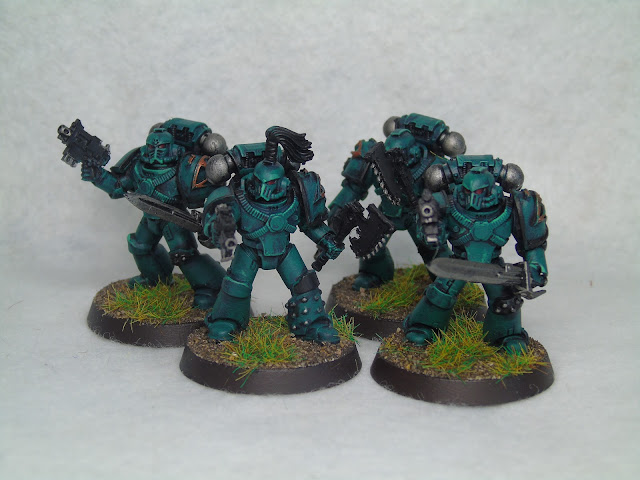 The full squad (so far). 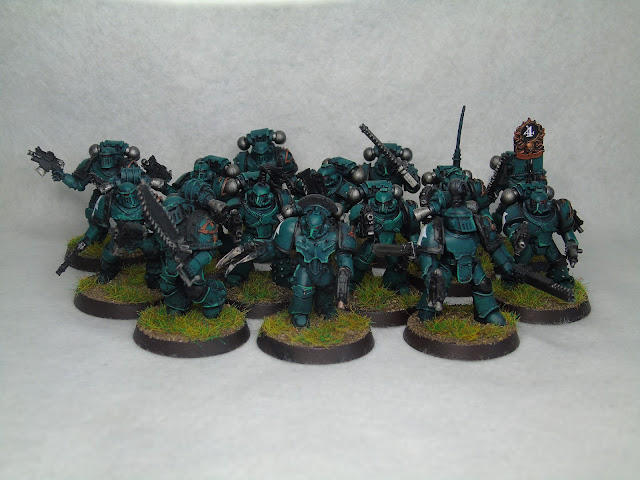 I know most of the people who read this blog don't play games workshop games, but I am after Chaos Marines heads with the top knot on - either the bare head or the one with the helmet. If anyone has spares, I would be happy to take them off your hands - I can pay for postage or the bits if needed. My supply has now run out.

The planet of Hervictus is technically just an hive world but one in which the small scale factories are fast becoming full scale forges run by the Mechanicus. The planet has been home to a small titan legion since the Imperium rediscovered it and in recent millennia this has only increased the Mechanicum's sense of entitlement. The Imperial Guard regiments that she raises are wholly under their sway and even the priests attached that are supposed to look after the men's souls only call the God-Emperor the Ommissah.
So I had to find some excuses to put some elements of the Mechanicus into my army somewhere. 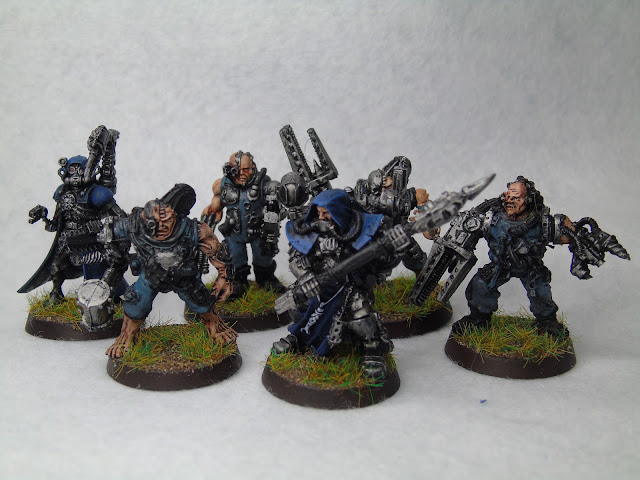 The first obvious choice was an Enginseer and his servitors, the battle mechanic of the Imperial Guard. I painted the Enginseer himself in the bright blue robes of the Hervictus Mechanicus but gave the servitors a much more muted tone to show their slave nature. 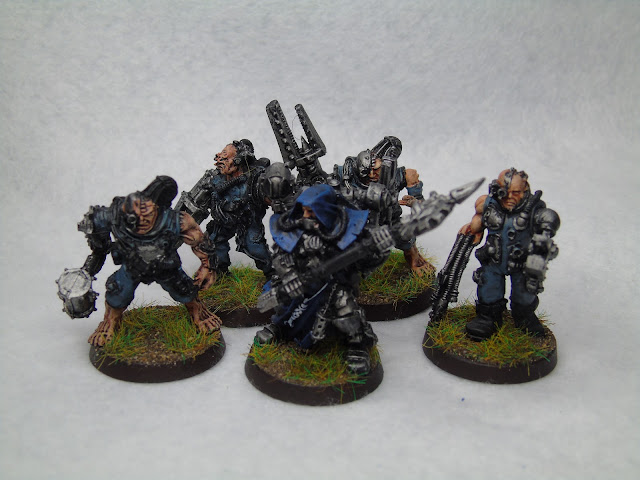 While I was building this unit I was hit with a realisation, to the Mechanicus a broken down vehicle isn't just a machine that needs fixing, it is sick, so what's to stop them seeing their human charges in a similar way, why can't they just fix them too. So, I converted a Skitarii with various GW mechanical bits plus a servo-arm from Anvil Industries to make a Mechanicus medic for my men, although, I am not sure this guy is going to bring them much comfort. 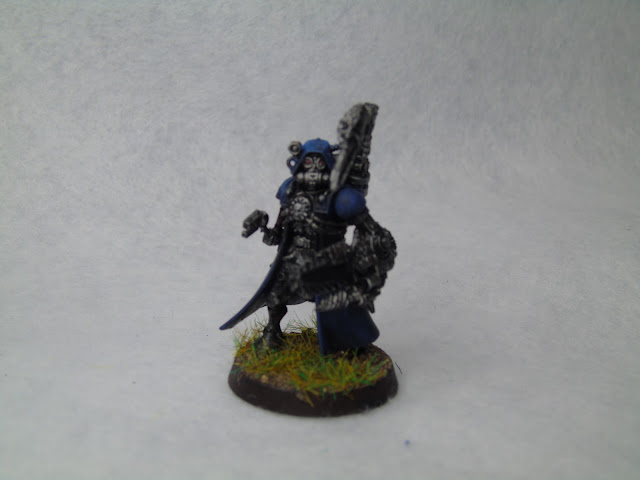 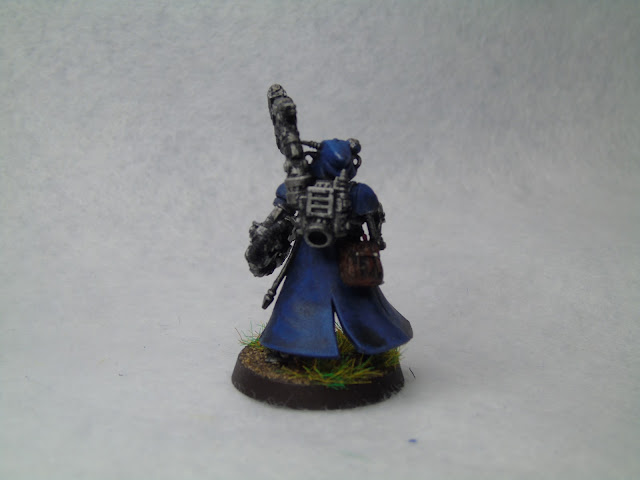