Here we are, normal service can start to resume. The move went well and my man-cave has started to be unpacked, all the models that has been in storage for the last 9 months are being dug out and my drive to get back on with some proper hobby has returned.

So, back to my Open Combat adventuring party, and it has 3 new members; Another tank (who was in reality a warrior priest but as ours never really did much magic he can fulfil that vital second tank slot), another ranger and a dog. The dog was me going off piece a little bit, I bought the model for my necromunda warband and it just never made it onto my painting table, so it got re-purposed to something that it fitted better into anyway. Both the ranger and tank are from the Otherworld Miniatures range again, they just fitted what I wanted to achieve perfectly, and while the tank's figure is supposed to be a half-orc, I think he represents the actual guy better looking like that, than he would fully human . . . 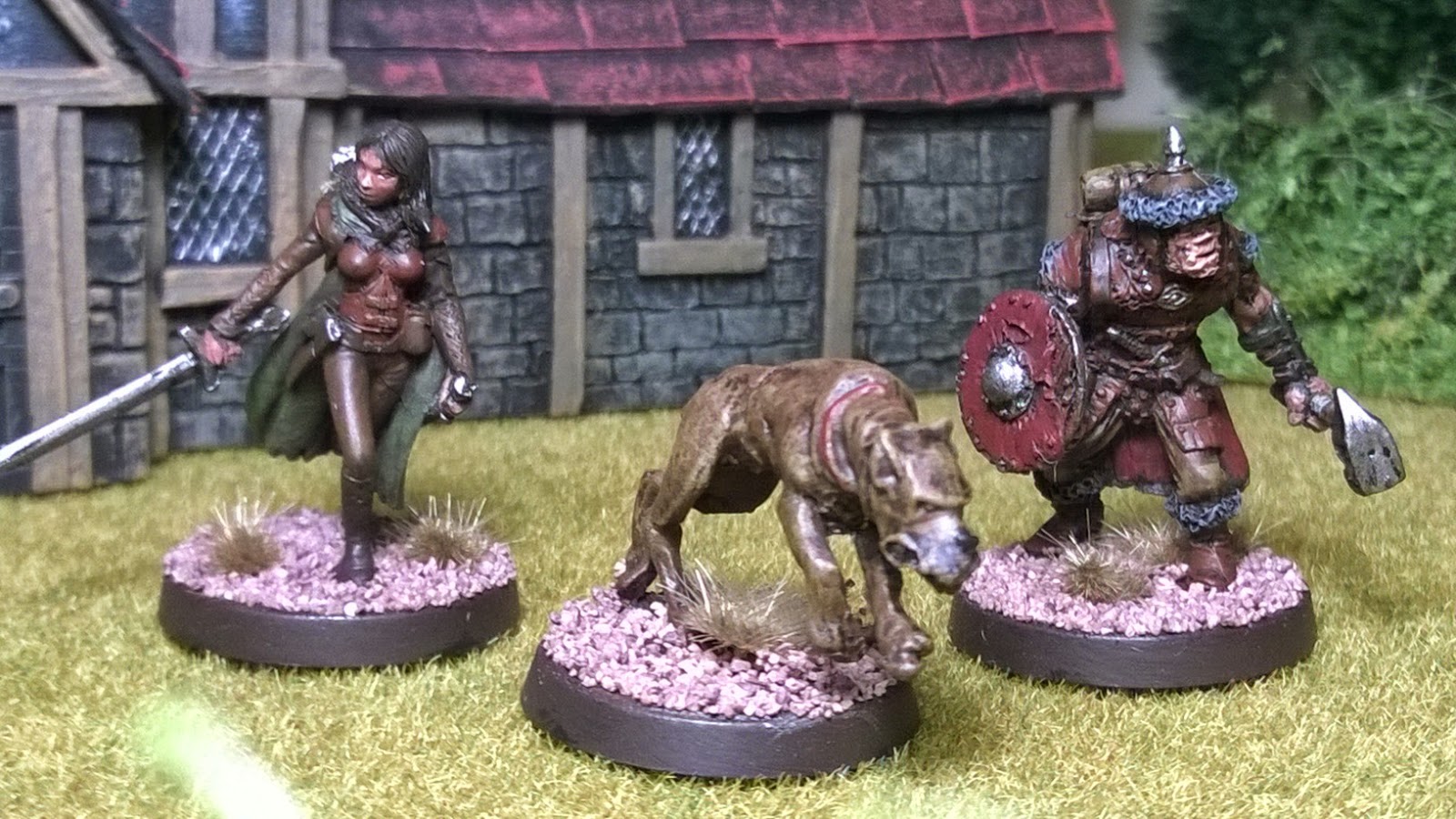 So my party now stands at 5 full members and a dog. These guys cover the group that I wanted them to represent, but if I want to take it to club to play with I think I will still add a few more members to give all the players something to do and give me a bit of redundancy in terms of figure breakage etc. 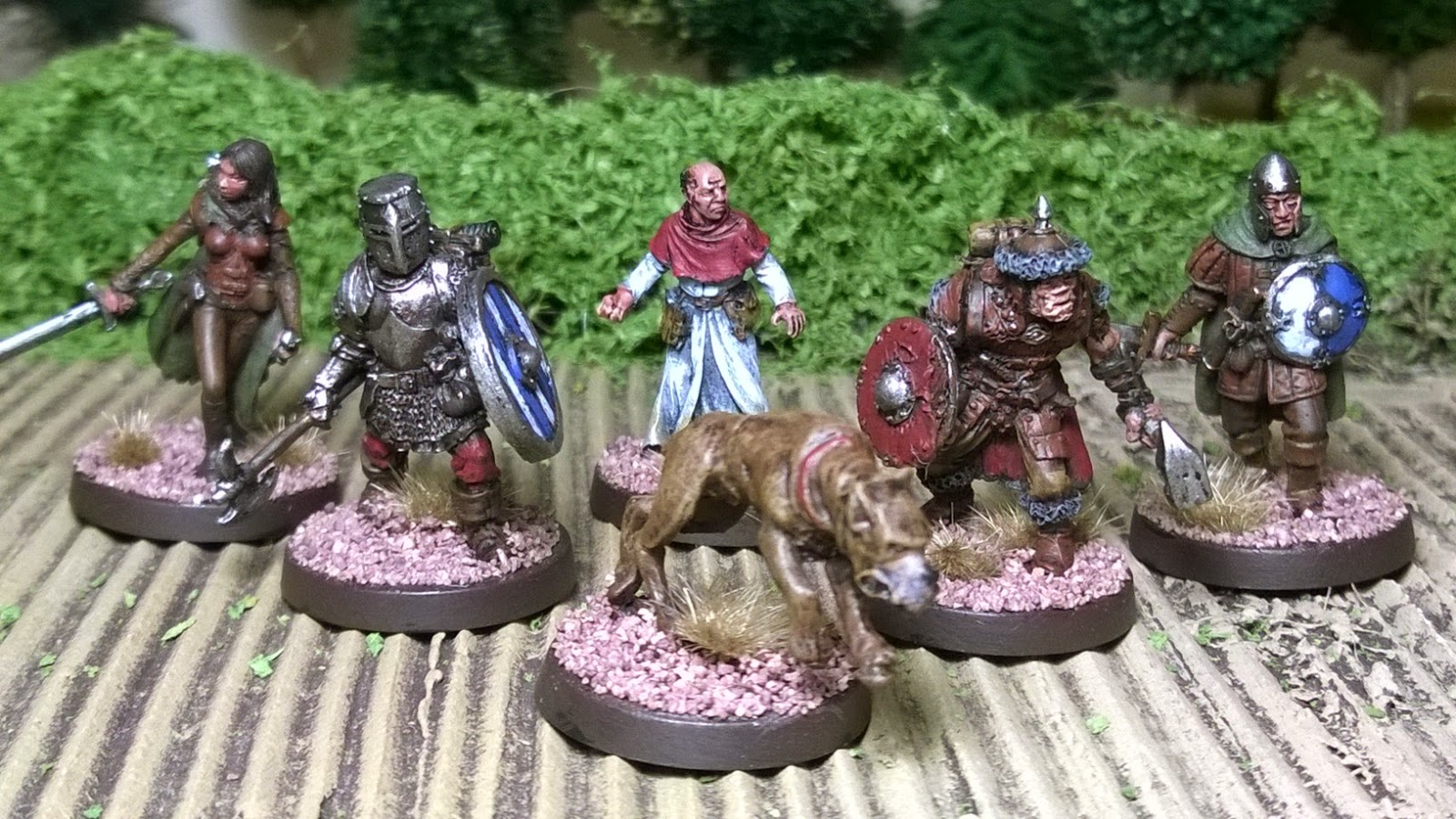 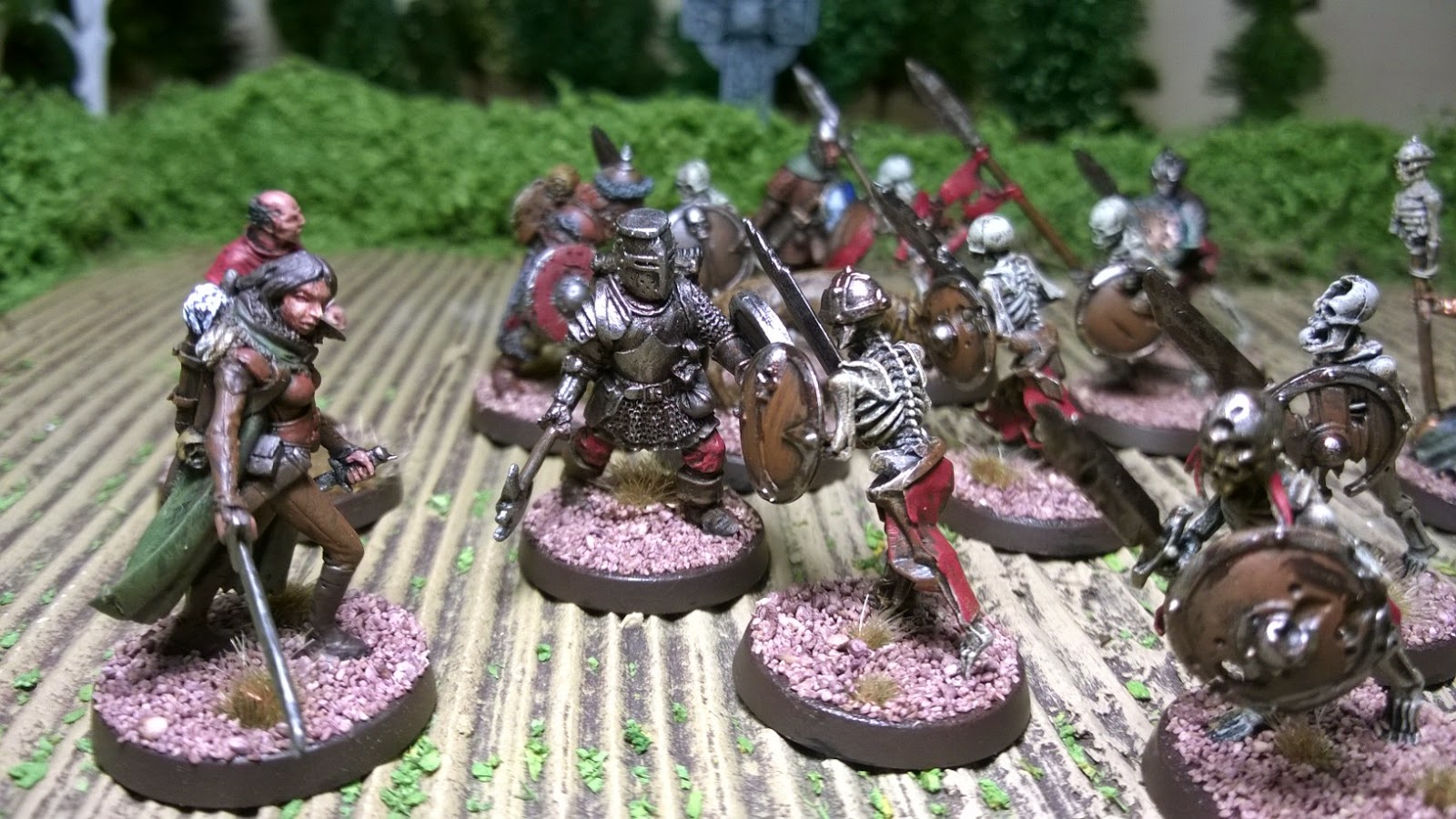 Thanks for reading. Next time, hopefully, more undead. . .
Posted by Mike C at 07:40 No comments:

Whats that coming over the hill?*

*Should probably read "Whats that going through the forest?" but the reference to the Automatic's song would have been lost . . . I picked this figure up at the weekend from Wayland Game's sale section in the back of the shop. I have no idea who the manufacturer is, what game it is intended for or why it was even produced, but any half useful model, that is this good a sculpt, especially for the princely sum of £1, has to be picked up. It's just a pity the rest of the rack were really obscure sci-fi models that I have no idea how I would use, and my lead pile looks bad enough as it is.
The picture on the blister pack shows this model with green fur, another thing that makes me wonder if it was supposed to be something really specific, but hey, I liked this model for what it should be, a proper fantasy werewolf. This guy just screams combat machine, something my Open Combat undead warband were always going to struggle with. I don't think I am ever going to start him on the board in club games, but what he can do is, if the human adventurers are having too easy a game, it will be his job to come on and ruin their day. I want this guy to be able to go toe to toe with the full on tanks, and at the very least give them a run for their money.

Hot on the heels of the more militant members of the Open Combat warband is their healer, again based really loosely on another member of my old LARP group. He is a Heresy Miniatures model that I have given a hand transplant to. In the game he is armed with fists (which really don't do all that much) and a bow (which instead of wounding, actually heals its target). The bow on his stat sheet represents his ability to heal, rather than being a really weird option I have given him. 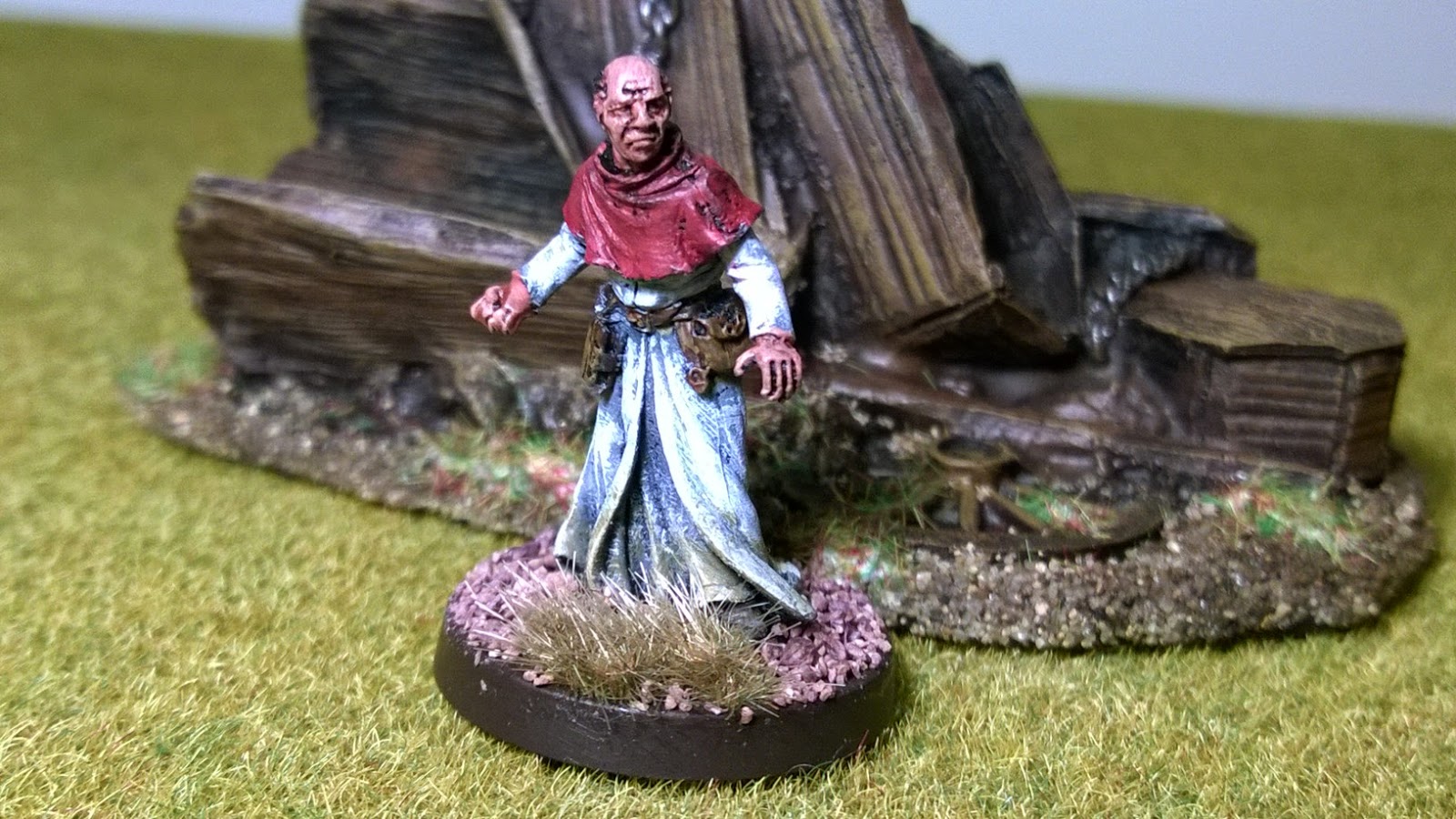 Next up is the Necromancer. Again he is a Heresy Miniatures model, this time he had a head transplant to make him look a bit less like the cultist model he is supposed to be. He has been given a much more pallid skin tone as I can't help but feel necromancers are unlikely to be getting much in the way of sun . . . He has also been given a bow, which this time represents his ability to raise the dead (he shoots at an imaginary undead troop and if he wounds it, it actually gets raised within 2" of him) and has a hand weapon just to give him a bit of staying power in combat. I actually want this guy to survive in combat, while the healer shouldn't last more than a turn or two if he is daft enough to get caught. 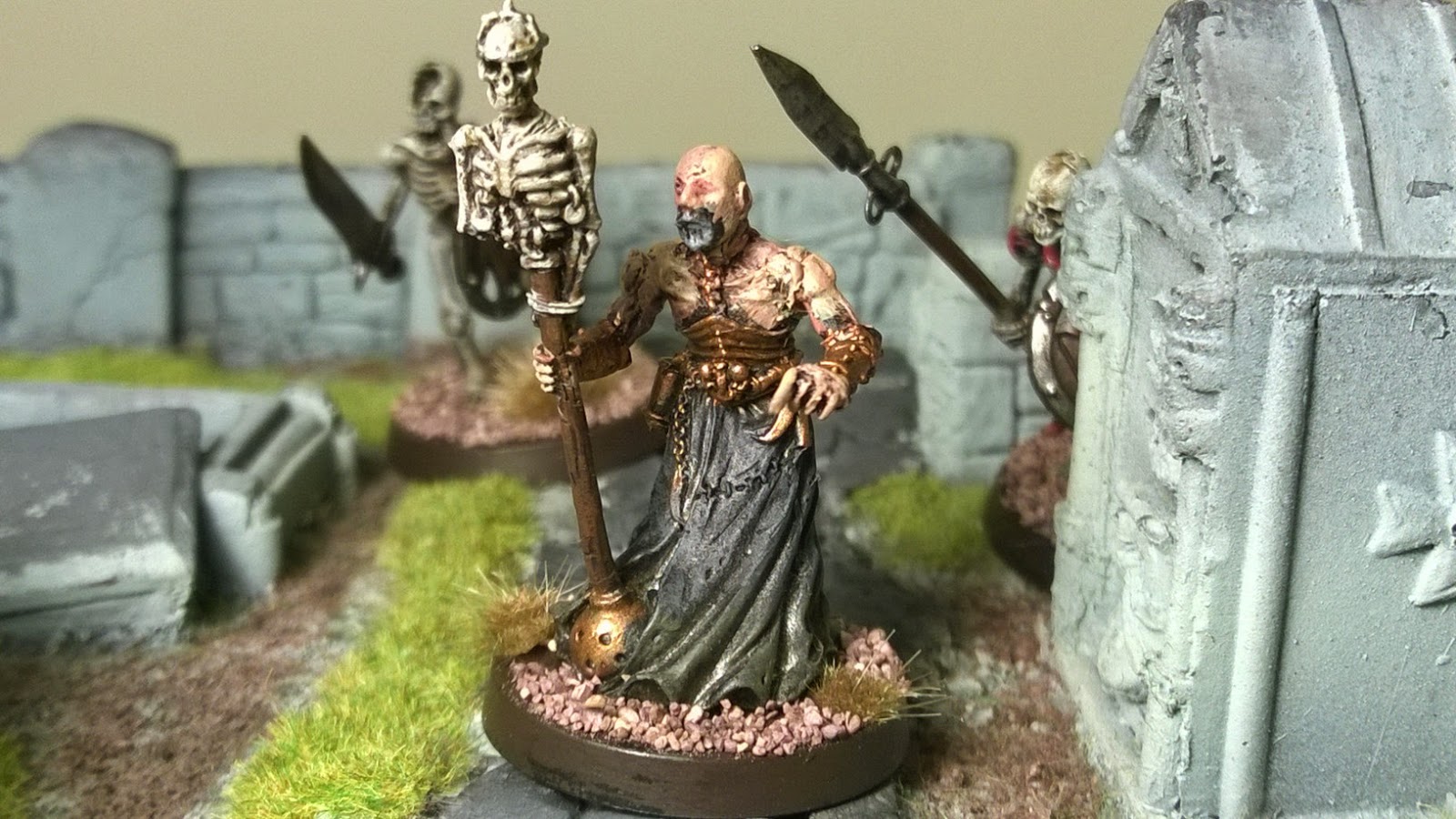 Lastly I have two new bits of scenery that tie into this game. A undertakers props pack designed for the game Malifaux and a whole graveyard piece from the old days of GW. The undertakers props are single bit resin pieces and are a really nicely sculpted and cast, I really can't complain about these bits at all. The GW piece is more of the hard foam that Ziterdes uses, while, this particular one was bought, as cheaply as I could manage, from ebay and had been partially repainted, so it has taken a few hours to try and tidy it up a bit. My next terrain purchase is going to have to be the Rendra grave stones set to do the bulk of the graveyard, but the big GW bit makes a spectacular centre piece. 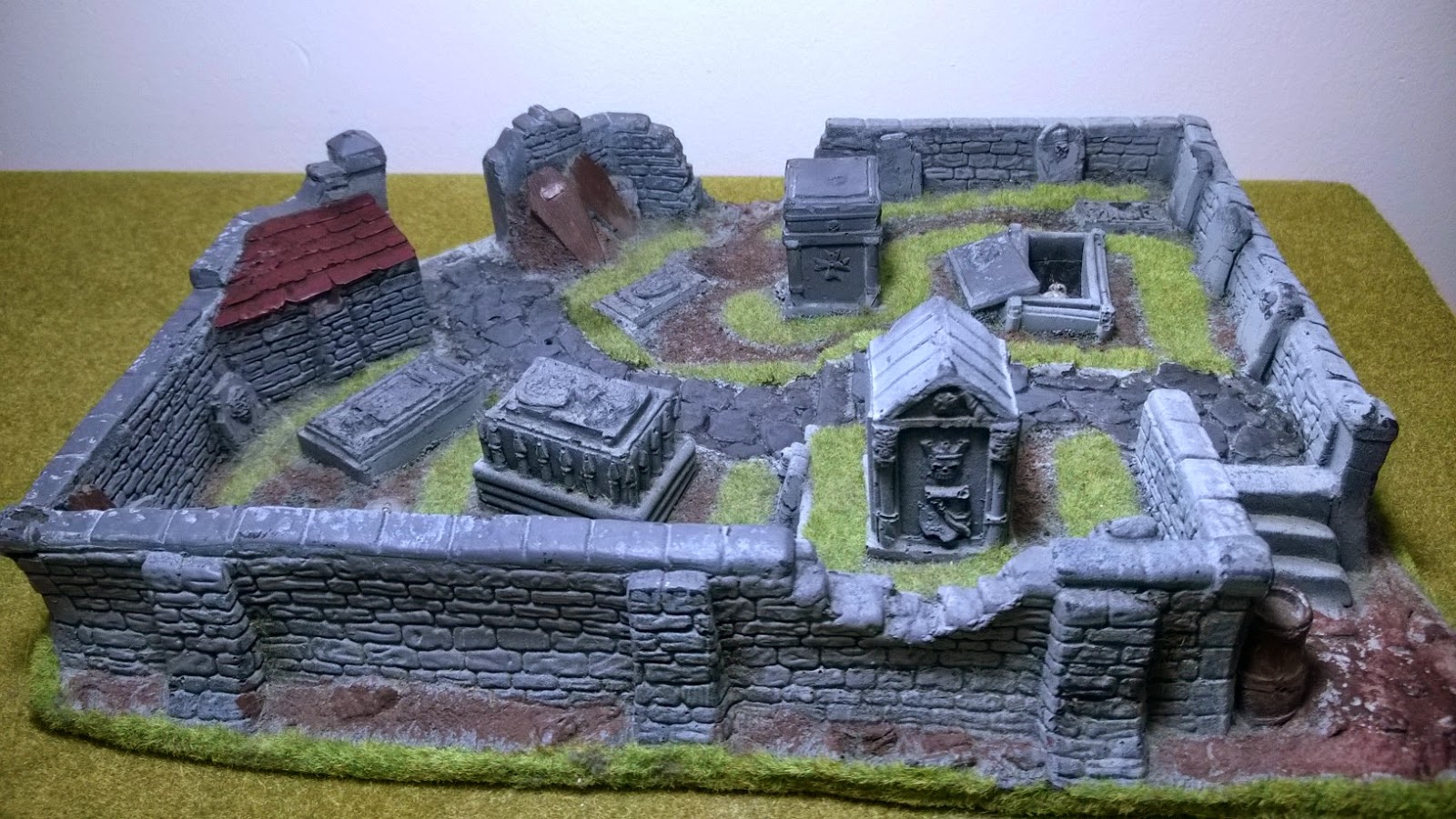 I can't really explain the last photo, I was just enjoying myself by that point.

This year I am planning on making this blog a bit more concise and bit less random, I am aware that unless you are following the theme list on the right hand side of the post, my blog can be a bit difficult to follow at times. Saying all that though it won't be all that concise for at least a few more posts as I finish off the remnants of last years projects, and here is a brand new project!

Open Combat is a new set of rules by Second Thunder. The rules allow you to make a warband sized force of anything to play against anything else, you fill out the stat line and give the model weapons and abilities, all inside a system that is painfully simple and balanced. In this case I am using it to make a club night game that will basically be D&D light. I am building a collection of human warriors, loosely based on my old LARP group, that each player control one of, and a random assortment of fantasy undead as a GM 'bad guy' side.

So far I have painted up; 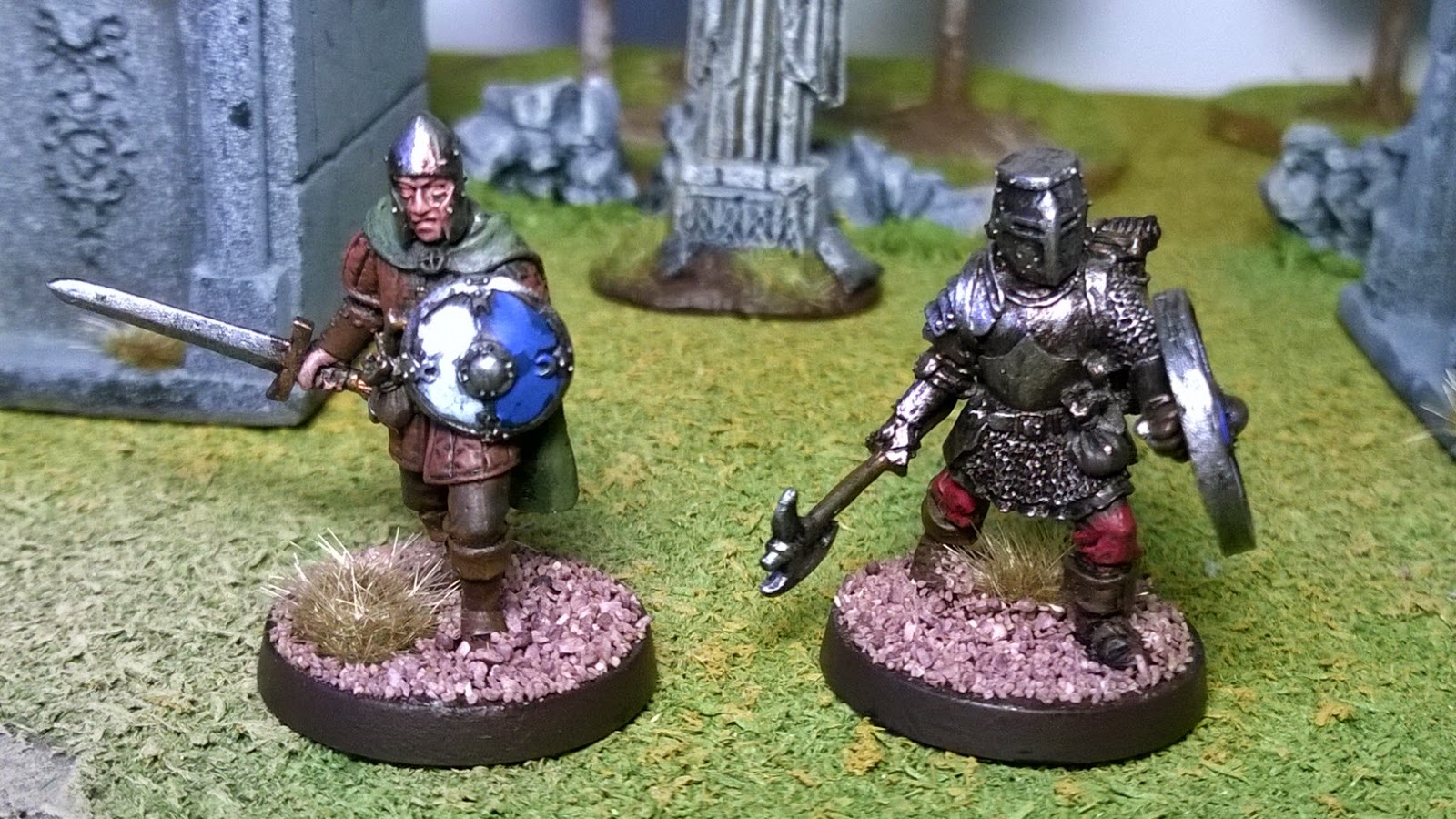 The first two adventurers, a ranger type and a full on tank. Both are from Otherworld miniatures. The first ten skeletons. GW models but I think some of the best plastic skeletons on the market.

As this is going to be a game I am going to run down at my club, I want to make sure I know the rules inside out, so I have been playing a few testing games on a small scale and I thought a mini battle report would suit this game and really show off what it can do. I am going to do some kind of assassination and/or capture an object mission, but as my necromancer is yet to be finished I am running my test games as full on slog fests to see how many skeletons my two guys can eat their way through, or as just capture an object objective. This game was all about capturing a bottle that was sitting on a shelf next to my painting table.

Open combat is designed for a 2' by 2' board but as I am just testing I am playing on a much smaller area. I limited the initial amount of skeletons to stop by warband getting bogged down too quickly, but I rolled a d3 each turn to bring on more skeletons. 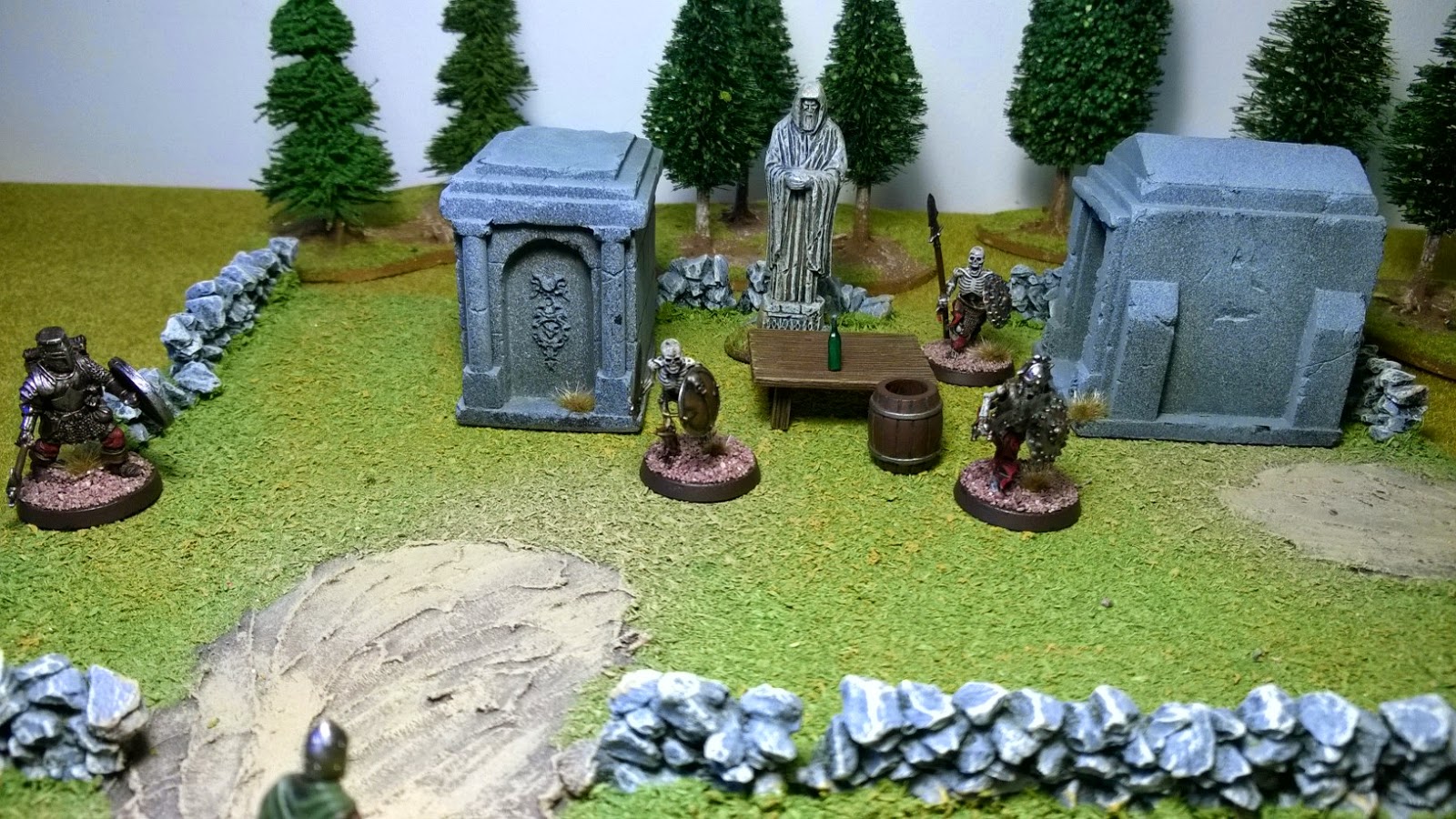 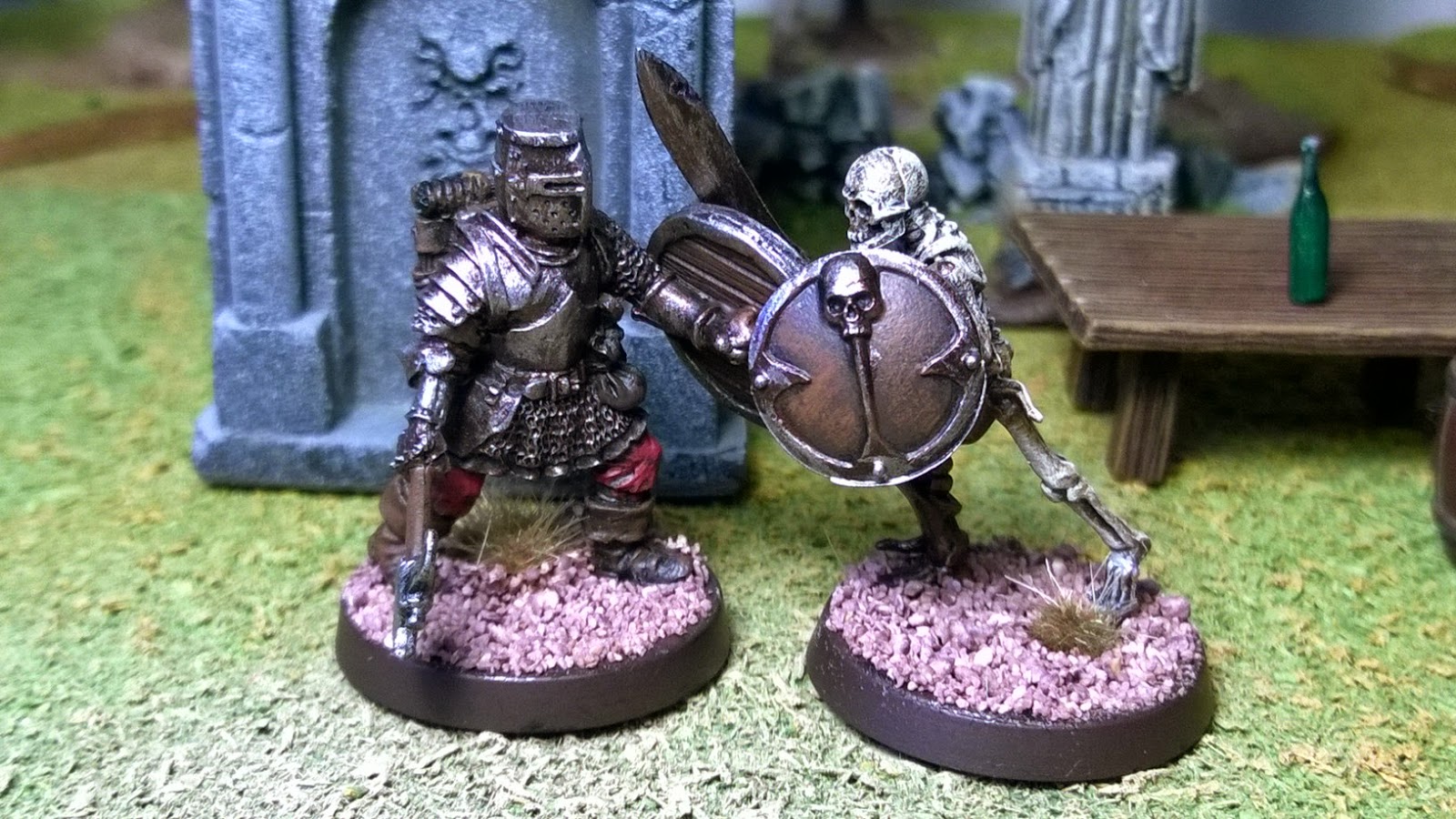 The tank does exactly what he is designed to do, charges straight into combat and smashes the first skeleton he meets, while the ranger also charged his closest target but only manages to push it back.
The skeletons then charge the only target they could get to which was the tank and deal a wound. 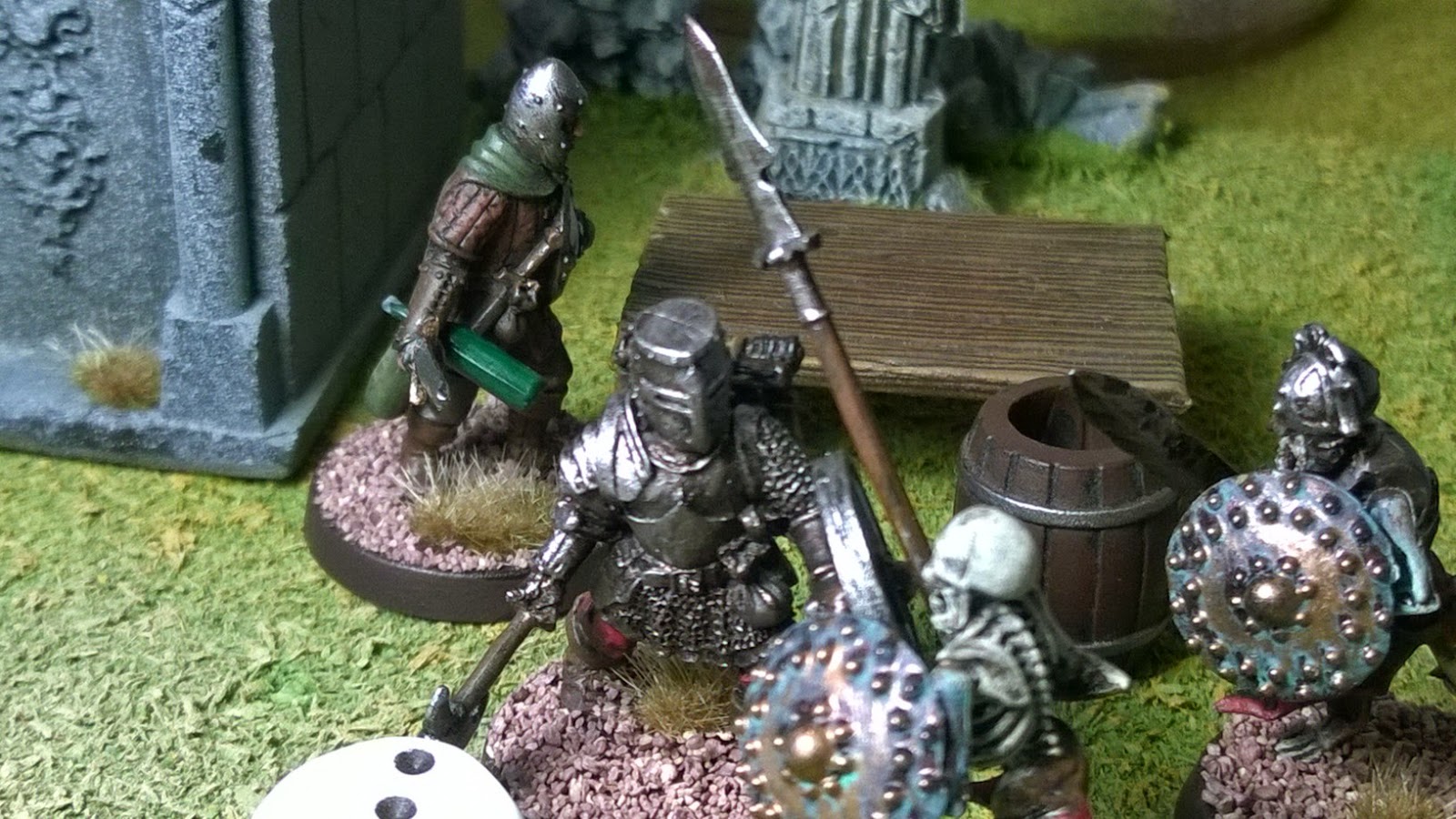 While the tank heroically holds back the growing skeleton tide the ranger takes the opportunity to run around the outside of the combat and uses his second action to grab the bottle.
After surviving another round of combat, the tank pushes the skeleton in contact with him back and turns and runs following the ranger who had already made a break for it with the bottle. I love this set of rules, I don't think I can express it any differently. This is one of the few games where the reference sheet at the back really is all I would hand out to my players, the rest of the rules are mostly specific stuff that they probably won't ever come across, but it doesn't lose anything by being that simple. I have more figures in the post to bulk out both sides as my club game will be on a much bigger scale, and a big bit of scenery that I plan to use as the objective point coming as well, so this game should get a lot more coverage on this blog. Plus there are all the other weird, modelling projects that I have started that I might, now, finally have a use for.

End of the year, where did that go?

So, my first year (7 months) of blogging is up, what have I achieved?

First up, I'm going to refer to the half year resolutions I made earlier in the year. My four hobby targets for the year were:

Outside of my targets for this year here are some more stats;


As I succeeded in most of my targets, I am pretty happy with how this year has gone. Other than working out what forfeit to give myself for not painting up 5 monsters, this year has gone really well.
This next year's aims are going to go down a similar theme to this year's, I'm not upsetting the apple cart too much here;


Lastly, purely blogging stuff. This wasn't an aim or a target or anything, I just found the facts interesting. As I write this my blog has had 2553 views, has 18 followers and has 63 posts written. So a massive thank you for everyone who either follows, or just reads this regularly, none of this would have been done without you guys. It's a weird feeling that there are people out there who are interested in what I get up to painting and playing with toy soldiers.