Lion's rampant bombard - It seemed like a good idea . . .

It's always that point in a long term army build where you have the basics sorted, you even have a tangent of an idea started, and everything feels like it is ticking along nicely, but then something happens in your head and you start to think thoughts that may not be entirely lucid, and this happens: 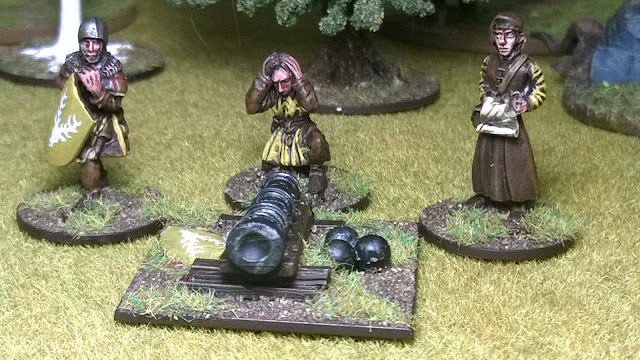 You end up buying a medieval bombard from the nice people at Crusader Miniatures. I genuinely have no idea if there are any extra rules on-line for these things, I am working on pure hope and a story I heard down my club of someone that had used one in a game once. Have to say, useful or not, I am extremely pleased with this little project. 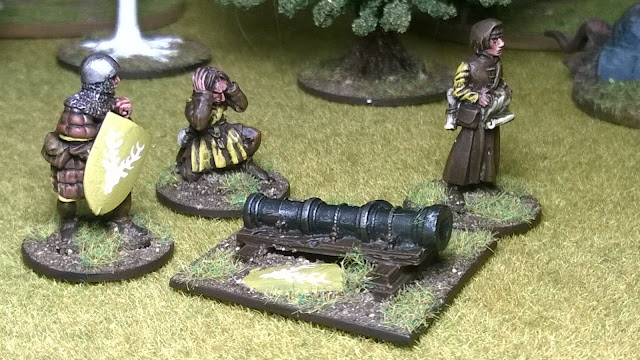 This second bit is far more logical. My normal tactic in Lion's Rampant is; foot men at arms charge, foot serjeants charge forward but then slow down and try to encourage the enemy to charge them* and the crossbows, either, just annoy your opponent or wipe unit after unit off the table depending on whether they packed any bolts this time. Simple but it suits me.
Then I read an entry that read something along the lines of 'hairy men who throw caution into the wind and who's only tactic is charge', I may have paraphrased slightly, but I felt a bond with this unit and knew I had to have one, but I came unstuck on what models to use. My army was really unified looking at this point, and while it is no bad thing to lob something new into the mix every now and again, I felt this army would look worse if there was a unit out of place. So I came up with an idea, simply use the same figures I used for the foot serjeants and change their weapons. Foot serjeants with spears and shields made sense with their stats, give them hand weapons and shields and they look much more unwieldy - although now I have read their stats properly I reckon I should have left the shields off to show their lower armour value, but hey. I now have a unit of fierce foot.

* They are much more dangerous when charged than if they charge 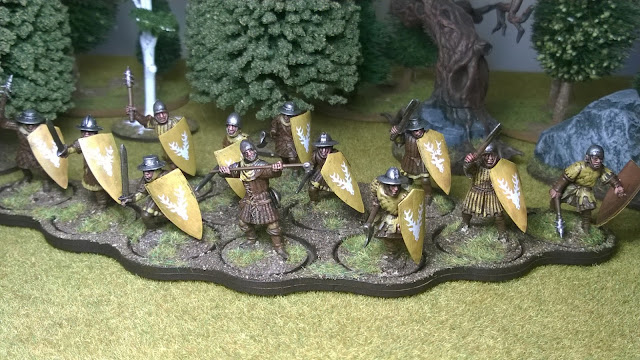 So the fierce foot themselves are Fireforge serjeants just like the rest of the infantry in my army, but the 'champion' at the front of the unit is the archer figure you got free with your entry bag at Salute. This guy has been trying to get into this army since April and I finally let him join up as he just looked so right standing at the front of this unit. 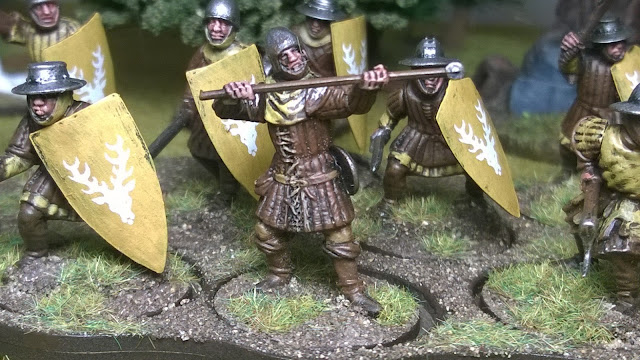 Here follows an admission that will severely damage my geek cred for all that end up reading this, but here we go; I had only ever played 1 game of D&D before this summer and I hated it.

If anyone is still reading; I can now say that 9 years later, I have played a second game with a completely different group of guys and I am completely hooked. The first game I had ever played was with a mix of LARPers, wargamers and general nerds and it was one of the most frustrating couple of hours of my life, with bickering, arguing and sulking going on around the table and it completely turned me off of the whole idea, but the second group is almost entirely non-gamers, made up of 3 guys who had never even heard of Warhammer when it came up in conversation, my normal LotR opponent (the only other wargamer of the group) and me, invited because I was a known nerd. 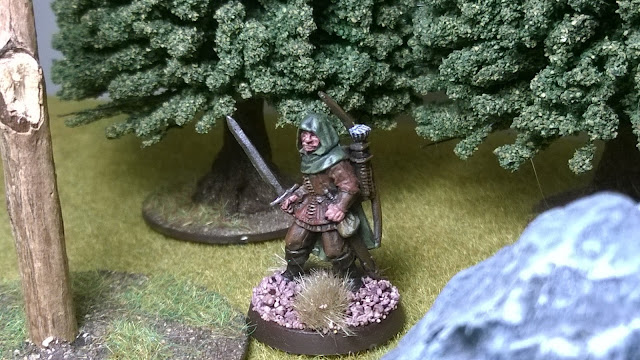 The character I ended up playing was Larch 'The Hound of Wheathold' Tanner; a serf, turned folk hero, turned exiled ranger. The GM decided to create our characters himself to make sure we had diversity in our backgrounds and of all the backgrounds mine has to be my favourite, the guy is just great; chaotic good - my ideal alignment - and with loads of secrets, basically one hell of a backstory. Larch is a classic leather armoured ranger, who is more archer than front line fighter, although he does carry two swords to hold his own if he needs to jump in. But he needed a figure.. . 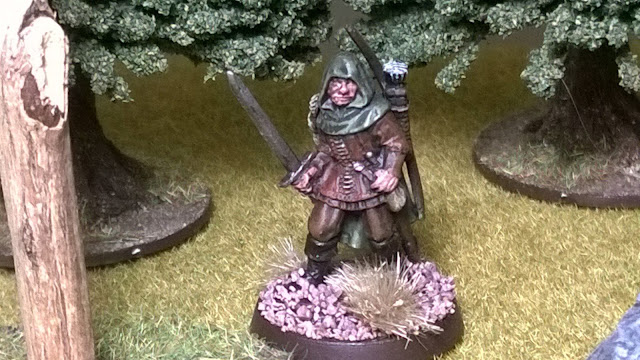 The figure itself was an eBay buy and I am sure someone out there will identify it, but I think it might be Ral Partha (?), but as ever, there has been a lot of conversion work done to make the model fit the image I was given by my GM. There is a second sword at his waist from the Fireforge foot serjeants plastic box, a backpack, rope and quiver from the Frostgrave plastic box and a metal bow from gripping beast. 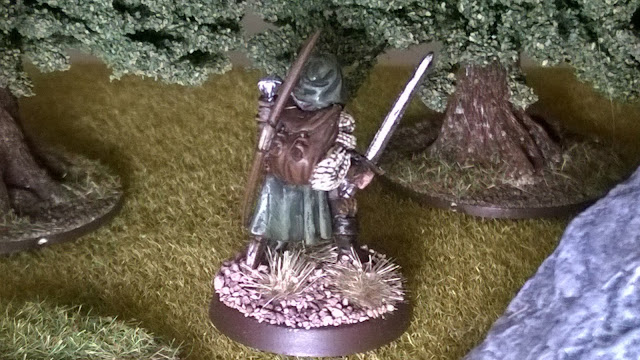 I'm really excited about using this guy in the next part of the campaign at the weekend, which is something I really never saw myself saying.

Email ThisBlogThis!Share to TwitterShare to FacebookShare to Pinterest
Labels: D&D

"When you begin a cattle drive, you can't expect to say you are finished until you have visited a fancy woman and played some games of chance".
- Wild Bill Hickok

Like I said in my last Dead Man's Hand post, I had planned a few more buildings at least, and a saloon had to be on that list. This is another 4ground kit in the form of Rogan's Bar - renamed to the mended drum - and it's friendly barkeep.
This was the most involved kit from this range that I have had to build, most of them can be built without instructions once you have a couple under your belt, but I wouldn't advice that with this one, but having actual window is a really nice addition. 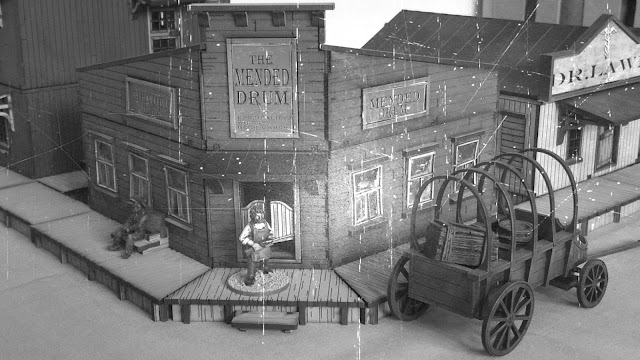 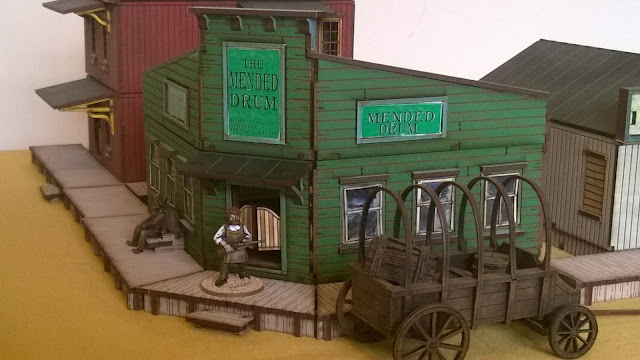 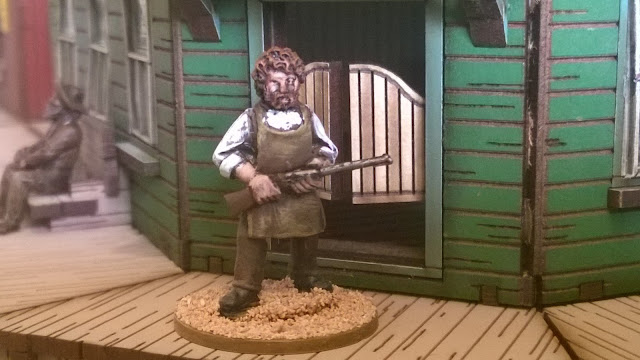 The barkeep is from Brigade Games - one of their hired help pack. Something about him just screamed barman to me. Maybe it's the shotgun? 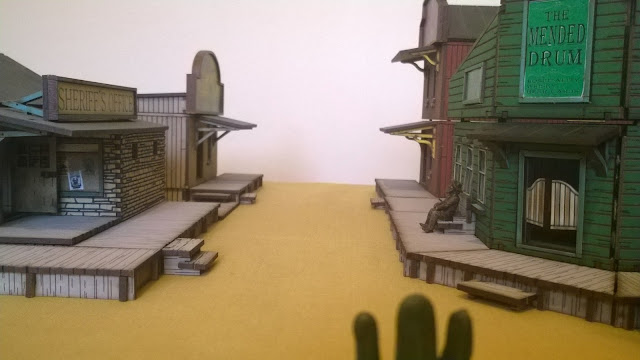 It's images like this that make me think I need to work out how to make some tumble weed. 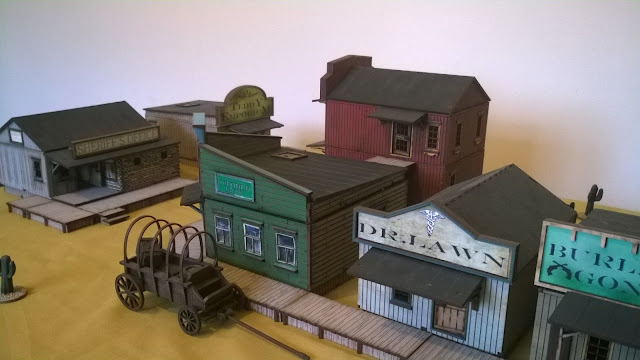 The more I look at these images while I write this the more it is being cemented into my head that I need to buy the second-floor addition to this kit. That bar just isn't imposing enough yet.

No job for the peasants

Let me start with a statement of fact; I hate painting cavalry. No idea why, it's completely irrational, but its the reason my armies are always made up of rank upon rank of infantry.
On that note, here is a unit I have been meaning to do for a long while but haven't managed to work up the courage to even buy until about a month ago. A unit of mounted men at arms for my growing Lion's Rampant force: 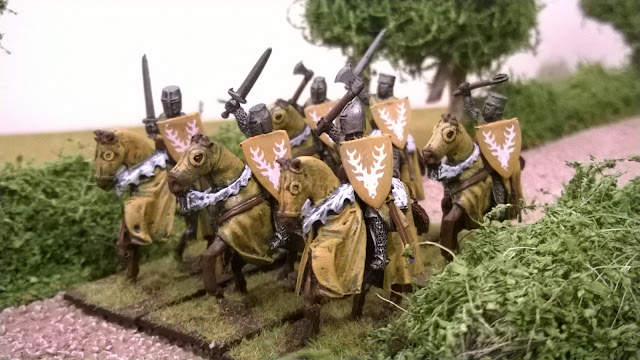 I have kept the colour scheme overly simple, keeping them in-line with the foot versions, rather going to town as I had originally planned, as I wanted them to fit into the established force without effort. Although, I have future plans to paint up a unit with a much more elaborate set of heraldry. 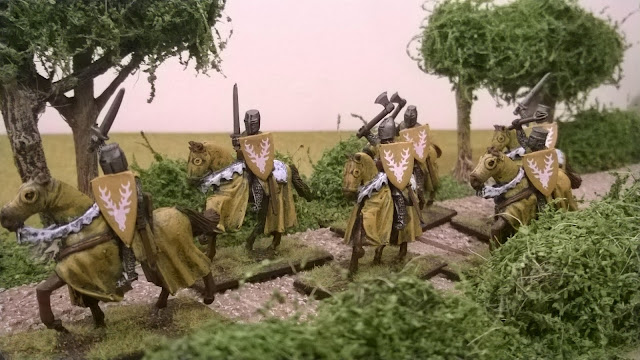 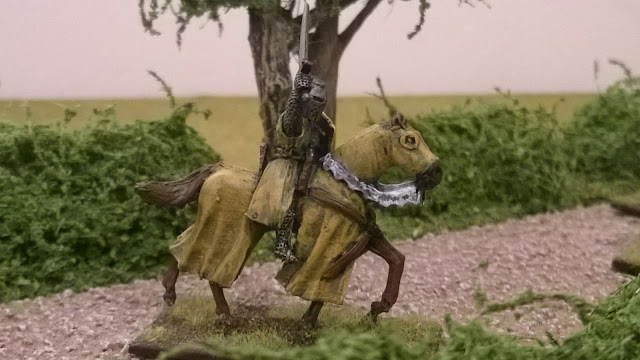 Did someone call in the armour?

I based my Canadian tank wars army on what I found to be the 'normal' formation used by late 1944 by the Canadian army in Europe. The ideal, full strength and fully equipped platoon would consist of 5 tanks, 3 Sherman and 2 Sherman Firefly, so that is what I have done, but I had points left over and wanted something with a bit of punch, so added a wolverine tank destroyer, who has probably got himself lost and repurposed. As with all of my Bolt Action armies I am not trying to recreate a set regiment or battle, I am more interested in building a competitive list that I can enjoy playing, but importantly, in my head, that is believable and/or justifiable. 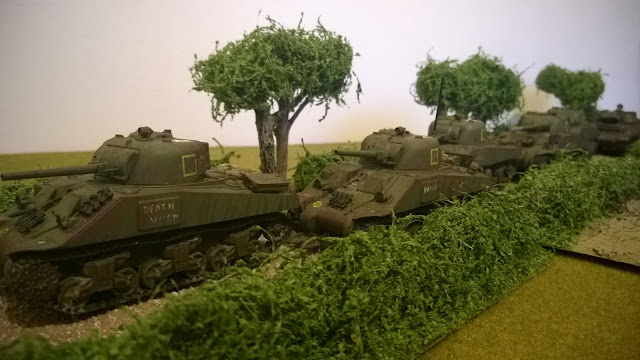 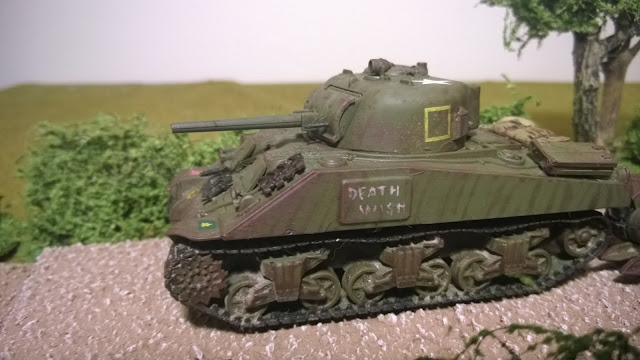 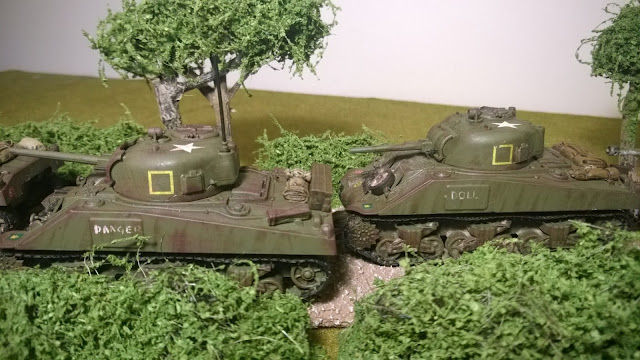 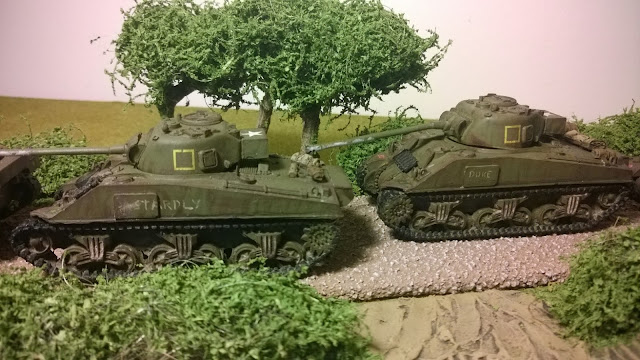 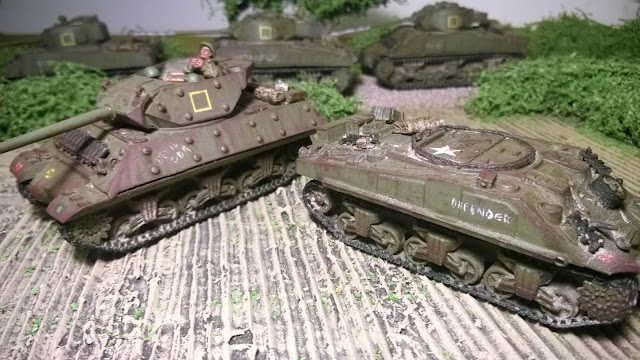 As ever I tried to put some research into the markings that my tanks should carry, then promptly forgot half of it in the excitement of getting my hands on the models themselves, so don't treat these markings as gospel.
As Death Wish is modelling, the front three markings are, for me, the important ones; The red square with numbers in shows this is a fighting armoured regiment, the yellow disc shows the bridge weight of the vehicle (in this case all Canadian Shermans had the weight of 33, which in the British army was only carried by the firefly variant) and the division badge (in this case the green of the Canadian 4th). Name wise, it was common for British tank regiments to all name their tanks with names that start with their company letter, so; in this case, mine are from D company, hence all the D names. Again I have worked on the assumption that this carried on across to the Candians as well. 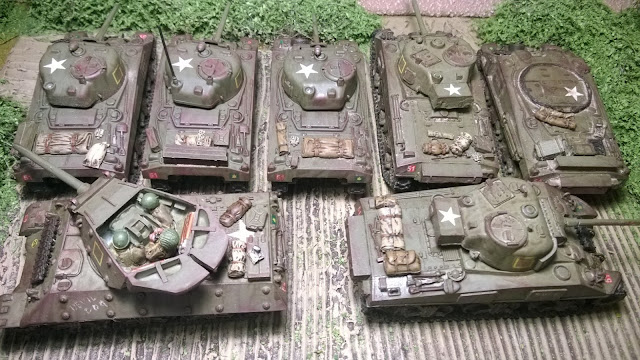 Gubbins on the back of the tanks. British tanks were notoriously messy with the crews covering their tanks with basically everything they could get their hands on. Not sure if mine are messy enough yet, but I have more stowage and bits on order so this can change in the future.

That's all for this time. I doubt I will surprise anyone by saying I have a few more tanks on my painting table, so they will appear on here in the not too distant future, but next time, something less Bolt Action-y.