Painting has been a bit of a struggle recently with an increasingly active little terror but I'm finding the odd moments of time to keep projects moving. I have 4 or 5 projects that I have marked as priority projects that I want to focus on getting finished so I can get figures on the table, hopefully, this year - so it come as no surprise that this post is about another new(ish) project.

Late 2020 when I was building up a painting pile ready to be broke for the next year or so, I got it into my head that I wanted a small, self contained ancient army that wouldn't end up sprawling into an endless project and I had half an eye on an Egyptian army. I'd priced up an army using Warlord Games figures, but as you buy box sets I was either going to end up with extra units to round numbers out or wasted figures, plus the army got really expensive. Then I discovered Newline Designs and their ranges. I placed an order for a Celtic chariot so I could test the size of the figures and see if I liked them - I can't remember if it made it onto the blog or if it became the last unit of chariots waiting to be built - and deciding I was pleased with the casting, I bought myself a New Kingdom Egyptian army after carefully checking my planned figures would fit in a single 4 litre Really Useful Box.

However, with my fluttering interests moving around and currently focussing on 15mm stuff, the army fell way down my backlog list to the point where I considered selling it on. In the end, I decided that as long as I started it asap, it wasn't going to take up much space, it would make for an interesting game and as it isn't that many figures, it should be a fairly quick job. I have no doubt other armies will be mixed into between units, but I aim to get this army done before the autumn . . .

The first unit was a unit of infantry. I wanted to test colours - esp skin tone - on something easy before hitting the more complicated stuff - I'm looking at you chariots. I've take a few assumptions with the painting, for one, I've seen claims that Egyptians of the period was darker skinned than their wall art and that lightening their skin was a way of showing that they were different to those black skinned savages in Numida, despite being similar tones. I've also seen it claimed that the art is darker than their real tone due to the paint they had at hand. So I've gone for something darker than I would paint someone from the middle east, but lighter than I plan to paint the Numidians - so that I'm probably wrong in both ways. 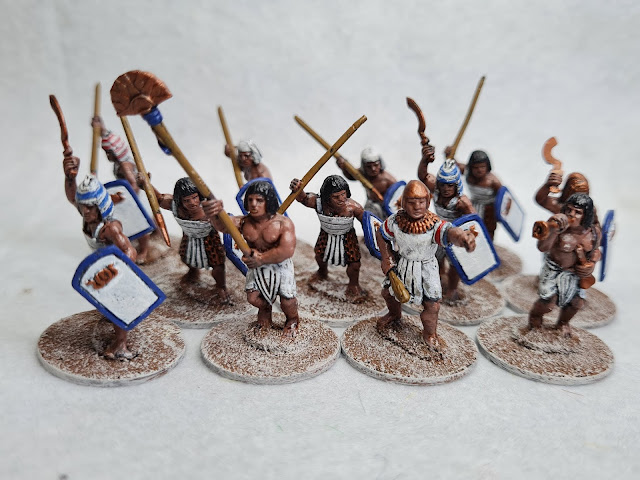