I started a new job last Tuesday so my hobby time is even more limited than it ever was, or at least until I settle down and work out what my new routine is. As such, this blog will change as well, being as regular as I can manage but also much more concise.

The first of these posts is a bit of a cheat post, as I have only actually painted 2 of the models in it, but the horses are just too clever not to post about. My D&D gaming group are working our way through the Hoard of the Dragon Queen campaign book and we have reached a point where we have been given horses by an NPC as we gather we are going to be doing a lot of distance travelling in the next few sessions.
I did some research on how other gamers show their character is riding a horse compared to just being next to it and came across a variety of methods, ranging from having a separate model of their figure on a horse, to horses with cut out backs or simply stickers you put on the horse while you remove the character from the board. None of these felt right for our group, however. The system I liked the look of was one put forward by Stuffer Shack and it was probably the simplest system, just have a horse on a bigger base, if your figure is on the base, it is riding the horse, next to the base and it is next to the horse. The next step was to pick horses with colours as close to the horses we each picked but again, the website gives enough choice that I have done pretty close. 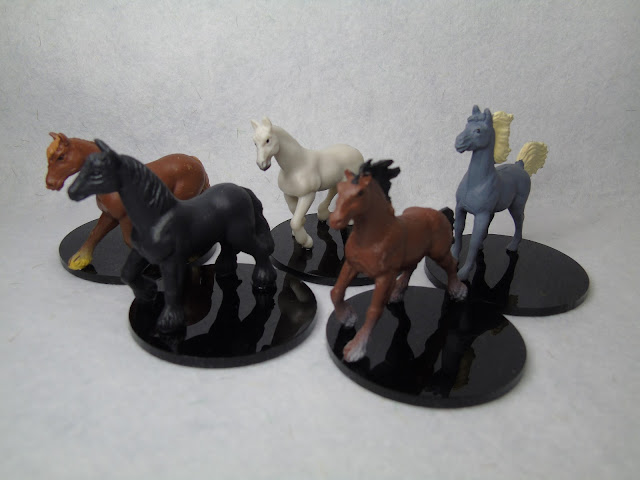 From left to right we have; Bucephalas, River, Osiris, Nibbles and Blessing.

Next up are my only bits of painting; our group's half-elf sorcerer who had been using an unpainted figure since the start and felt left out, and our wizard's mastiff war dog. The half-elf is a Reaper Miniatures figure and is made of their soft plastic which I really don't like the feel of, while the mastiff is from Otherworld Miniatures. 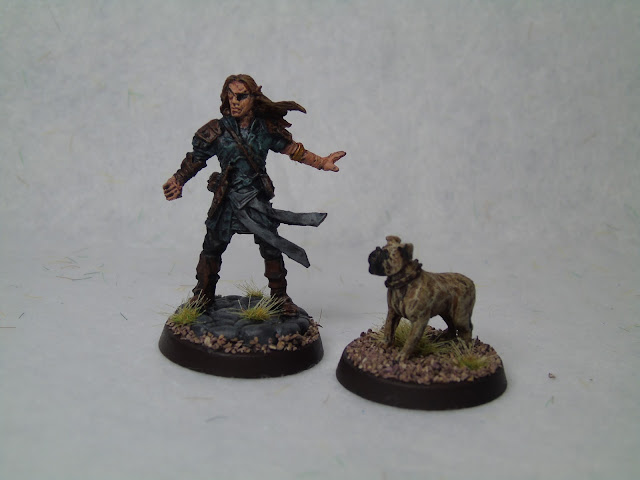 Thanks for reading
Posted by Mike C at 16:11

Email ThisBlogThis!Share to TwitterShare to FacebookShare to Pinterest
Labels: D&D