Ok, so one of the main reasons I was starting to chat to my mate about wanting to play Imperial Assault was that I had just seen Rogue One in the cinema (losing some serious geek cred on how late I saw it) and the final battle just inspired me. When I saw the Rebel Rangers in the shops over the next few days, in my head they matched exactly what I was after, so I actually bought a pack before I had even worked out how to justify buying the starter box. Upon looking at the uniforms I have discovered that they are in the Battle of Endor style dress and not the ones from the end of Rogue One, but frankly, who cares too much?
I painted the squad in Battle of Endor colours, as I am convinced that would look epic on a board and if Fantasy Flight Games don't do an expansion based on it I will be shocked, but they look professional enough that they will make great standard rebel troopers for any scenario I plan to put them into. Again, I would be shocked if I don't pick up at least one more pack.
The guy at the front is Fenn Signis from the starter box set. When we tried the campaign play out for the first time this was one of the heroes that my mate didn't choose but on close inspection it is obvious he is wearing the exact same uniform as the Rebel Rangers, just with the addition of the scarf, so I painted him to match them, keeping his original scarf colour so it is obvious who he is. 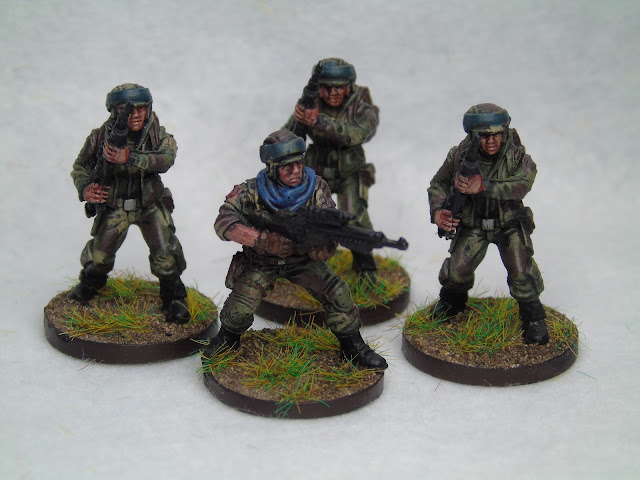 The rest of the heroes I am keeping to their artwork colour schemes which is a bit more of a headache.

Thanks for reading
Posted by Mike C at 10:39