Saturday saw the first of what will hopefully be an annual event, the Saga Iron Man Contest. A grueling day of Saga games using other people's warbands to find the best player out there, if you believe the blurb. In reality, it was a really laid back, fun event, with very few players taking it any more seriously than they had to, something I hope the organisers (Wargames Illustrated) are very proud of. 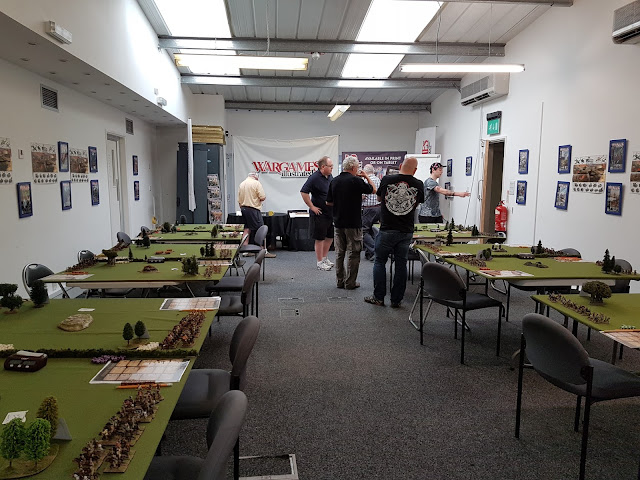 A photo of the room just after I turned up. 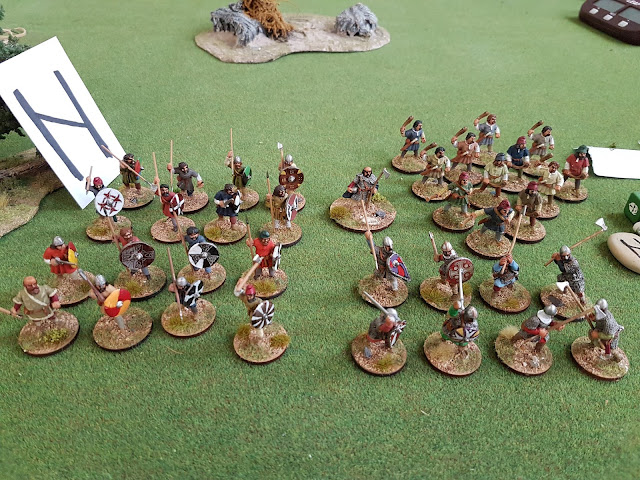 My first game was Anglo-Danes vs Normans. My opponent was Roger who was one of the Gripping Beast guys who stood in because my actual first opponent was ill and was a really good laugh. This was my first game of Saga for possibly two years and I was very rusty, but the strength of this set of rules are how quickly you can pick them up and by the end of the game I felt I had a decent grasp on what was going on again. The biggest lesson learned in this game was not to charge with Anglo-Danes until your opponent is completely worn down. 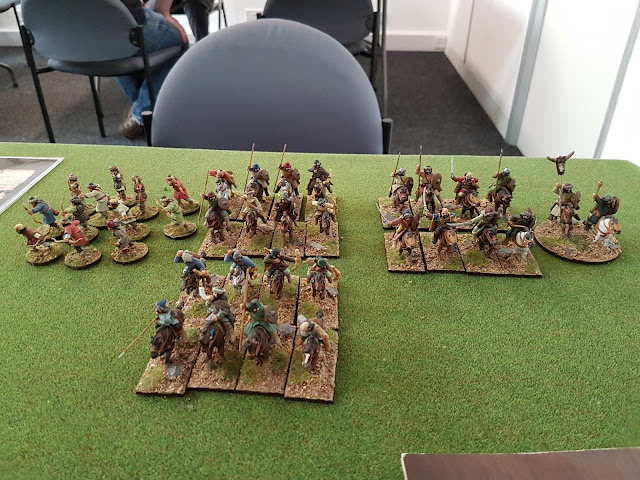 My second game was Steppes Tribes vs Rus Princes. This game was against Tracy and for me was an unmitigated disaster. I went in without a real plan, relying on guys being slightly less fragile than they were, and then when in the second turn I didn't get the right Saga dice results I suffered so heavily from one unit of levy who shot more times than I am happy about that I never really stood any chance of clawing the game back. I'm fairly sure Tracy didn't even put a single dice on either of her Hearthguard units all game. 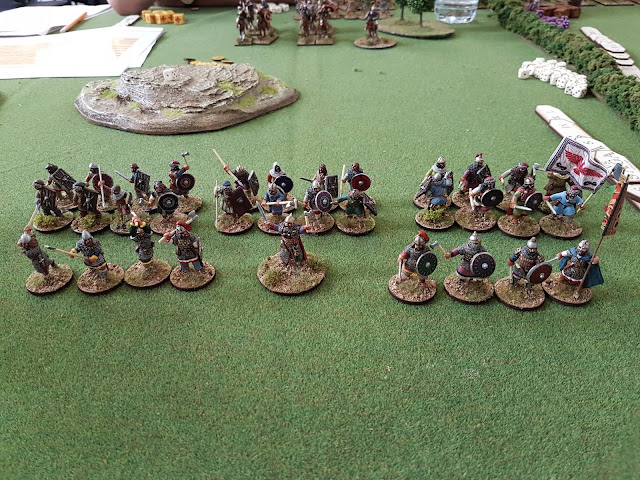 My third game was Joms Vikings vs Strathclyde Welsh. The game that we went into with everyone, helpfully, telling me was such a bad matchup that the Welsh had no chance of winning. Boy, did I prove them wrong. I followed advice and sat back for a couple of turns trying to build up wrath but my opponent (Richard) wasn't going to let that happen and never let me get any, so by the time we were in charge range I was going in without any wrath. Figuring you don't become the leader of one of the most feared Viking warbands in the world without being a little bit scary yourself I charged my Warlord forward to deal with a unit of levy that were trying to make my warriors into pin cushions, a good he did really well. Then I fell foul of a rule I had forgotten, a Warlord inside charge range of an enemy warlord must charge if he is doing a move, which scuppered my plan of doing a second move to get him back into his lines. From there it went downhill quickly really. 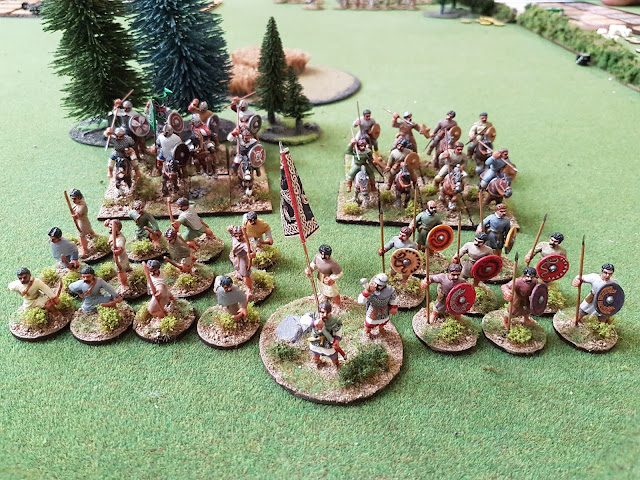 My last game was Welsh vs Vikings. I've been beaten by the Welsh down at my club a few times now and know how horrible they are to face but it was only once you took control of the army that I realised just what they could do. With a big block of Hearthguard on one flank and mounted warriors on the other, taking it in turns to charge forward, throw javelins and retreat when charged, they are devastating. My opponent (another Mike) tried really hard to pin me down but didn't really stand much of a chance. My only victory of the day and my only Warlord to survive.

If one of these days comes round again I would strongly suggest that you try and make it down there. It was a really good day out, got some great games in and reinspired me to look at my Dark Ages forces and to make an effort to play some Saga again.

But that isn't where this day ended. Figuring I had another 3-hour drive to get home* and that I knew Warhammer World had just been refurbished, I figured it would be churlish not to see if I could get there before it closed for the night.
*Which I was in no rush to get started on 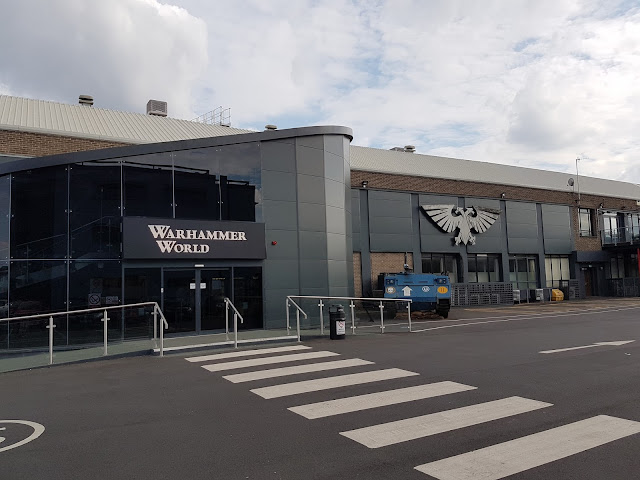 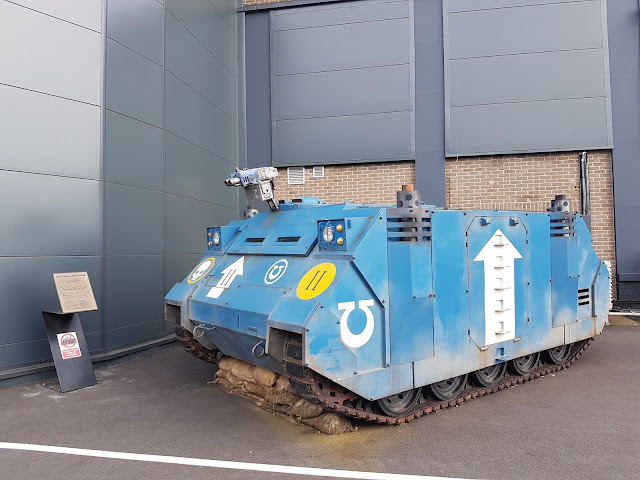 Luckily for me they were running an event so were open until 8 that night, which gave me enough time to visit the museum and have a beer and bowl of chips in Bugman's bar. Even if you have no interest in GW or anything they stand for I will still recommend their museum, gone are the dusty shelves with figures that you don't care about, replaced with massive dioramas. 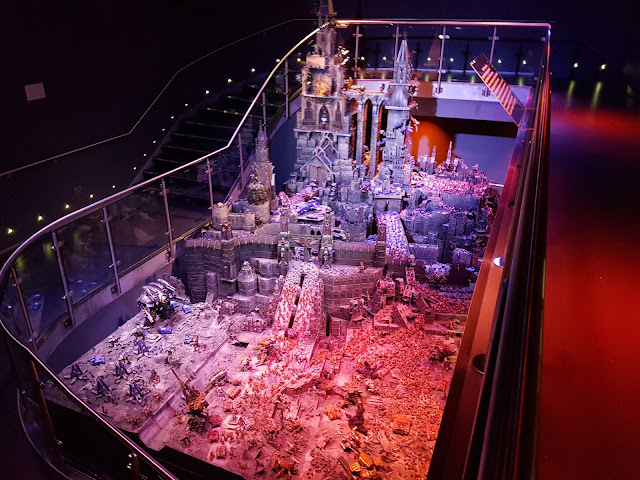 The biggest diorama in the museum, but there are another 5 or 6 that come really close to being a similar size.

I'm not going to include more photos as the sheer size and detail put into these things doesn't come up at all on the images. They really have to be seen to be believed.*

*Also on a side note Warhammer world has 3 Pokestops and 2 Gyms,
of which nearly all are in range of Bugman's bar . .

Thanks for reading
Posted by Mike C at 08:05

Email ThisBlogThis!Share to TwitterShare to FacebookShare to Pinterest
Labels: Saga