Two of my last three posts have both been something that someone else has done for me, so I figured I had better do some real modelling for this one.
Warlord Game's Bolt Action supplement Operation Sea Lion is a strange old read, with some bits being really good fun to think about ideas for, while others are just downright implausible, but it has given me a wealth of ideas for VBCW, first amougst these was the Toxophilite club. In the book it claims that women were encouraged to join the armed forces but should be pushed towards their more 'traditional roles', some, however, have found a loophole in this rule as archery clubs are about as traditional in rural areas as anything else.
So the hunt for appropriate female models began at the only place that made any sense, Bad Squiddo Games. I picked up their Mrs June model and a pack of the Copplestone female archaeologists as I like the mix of practical ladies and those who still want to be seen in the latest fashion (helping to keep the late 1930's theme). Luckily, I already had a big bag of Gripping Beast bows from another project, in my bits box, so assembly was just drilling holes in clenched hands and a couple of hand swaps with plastic Saxon Thegns. 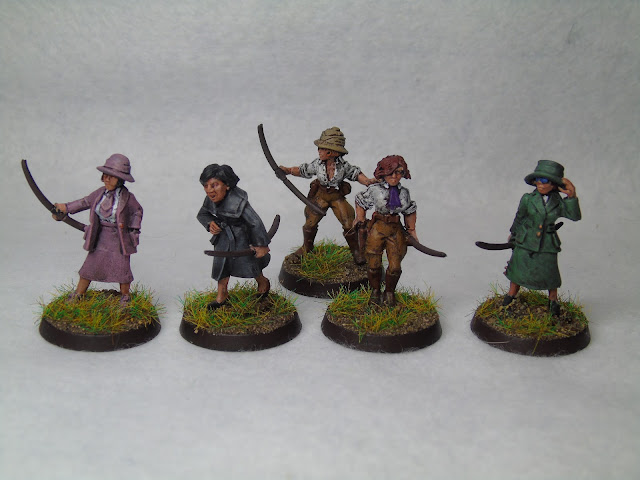 All in all, I am pretty pleased with the outcome.

Thanks for reading
Posted by Mike C at 08:58