As alluded to in passing last post, I lost my job at the start of last week. Because of this I put some quick posts up as I expected to be doing a post every other day, if not more often, but this hasn't happened as I thought it would - it turns out being unemployed is busier than I anticipated. However, that doesn't mean to say my paint brushes have been idle.
I went into this year with loads of plans for finishing projects but having a 30k project as a side note, yet here I am 2 months in an it is still my main (if not only) focus. I have my first game lined up for next weekend and a ticket booked for a tournament in June (more guaranteed games), so this year looks pretty 30k dominated already.

The models I have painted are not part of any list I have written but, again, are just models that I love the look of and hope will turn out to be useful.
First are a squad of Mechanicus Thallax. One of my favourite books in the Heresy series is the Last Heretic, one of the things that really stuck with me were the members of Carthage Maniple, 4 robots and their controller attached to the Word Bearers, so intermingled that one of the robots is even an honourary Word Bearer and is called 'brother' by the marines. They are cybernetic robots having a human brain and spinal cortex hidden inside their machinery to do the thinking for them as the Imperium of Man doesn't trust the idea of AI, which gives them the grim dark element integral to Warhammer.
At the moment these are going to be part of my Sons of Horus army - I can have a single unit with a Forgelord - but might in the future become the basis of an allied detachment or maybe an army in their own right. I kept the colour scheme simple and complimentary to my SoH so they don't stand out too much from the marines. 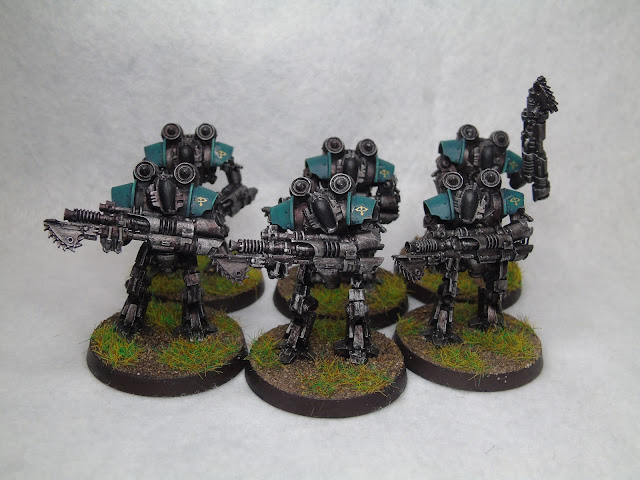 Next up is a Sons of Horus Predator, two photos of the same tank rather than two tanks after a mess up with the casting of one of the side panels left me in a position where I had an extra turret and side sponsons - these now have magnets in them to allow me to swap easily.
Both weapon combinations that the tank is sporting are about as sub par as I think you can go but the idea of a tank with nothing but flamers holds a certain appeal and a plasma tank is something I will rarely turn down the chance to use, so I see a bright future for this tank in my lists. 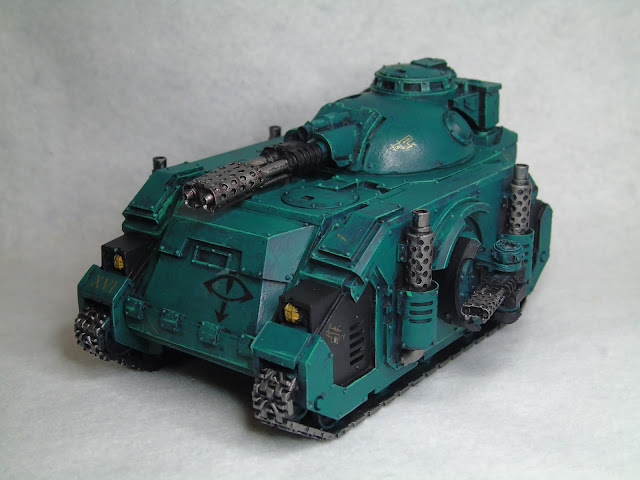 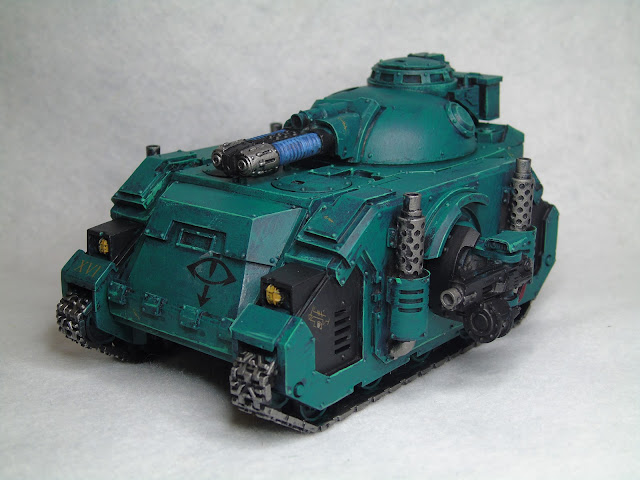 Thanks for reading
Posted by Mike C at 15:45