As I mentioned a couple of posts ago, the lack of actual hobby while away, tends to lead to me getting my notebook out and planning what will go onto my painting desk in what order when I get back. While most of this falls to the wayside the moment I start painting, this holiday's notebook had one entry, not just underlined but, fully circled; VBCW B.U.F.
VBCW was the first thing I blogged about and yet it is still one of my big unfinished projects, even though I bought nearly all the models I would need to get started a good 2-3 years ago. I finally made some serious progress on the Albertines last year but I still had to sort out their opponents, so, I decided that 2017 had to be the year I finished my B.U.F ready for a game before the summer.

I had planned my B.U.F to be a generic bad guy unit from somewhere similar to my Albertines (who were, in my head, originally based somewhere between East London and the West of Essex), but as time has gone on and my understanding of the setting has improved, I have tried to fit them into an 'actual' unit. From my understanding*, the London based B.U.F legion was destroyed fairly early on in the conflict and has been replaced with the Kent based Alfred the Great legion, so that is the unit I decided to go for.

*Anyone that knows better
feel free to message in! 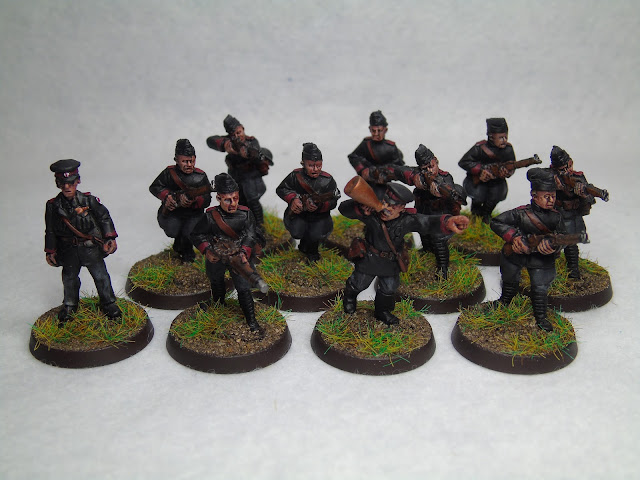 My first 10 man unit with attached medic. While I will almost definitely use the Bolt Action rules to actually play the game, I am carrying on my plan of building all my squads to both of the 'official' VBCW rulesets standards in case I end up being able to use them for a game of that too.
The bulk of the models are from Footsore Miniatures, but the medic is from Ainsty Castings and the sgt is a Russian WW1 officer from Great War Miniatures and seemed to fit my theme.

Thanks for reading
Posted by Mike C at 13:40