Carrying on my plan of getting stuff finished, I am going back to where I started the year, my 40k Imperial Guard. It has taken a bit of a break, partly because I think you need to once you have painted too many of one single uniform and partly because I got distracted by other things. However, I wanted to paint something just so the project didn't slide into being a dead project but that wouldn't open the can of worms of 'now for the rest of the platoon' and a single auxiliary squad seemed perfect, especially as these fulfilled my current painting requirements; they were built and sprayed already.
These guys seem to suffer terribly in unit reviews online, but as my mate and my, normal Imperial Guard playing styles are just so similar I needed something that would set us apart. Just for reference, we both favour lots of troops with no heavy weapons in infantry squads, lots of Leman Russ battle tanks etc with the only real difference being that he has batteries of big guns that I just can't match. 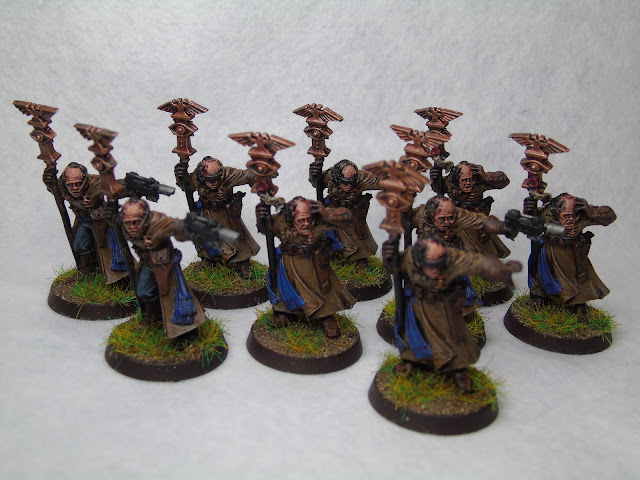 I painted the models in colours that I felt would compliment the bulk of my troops, the same colour jackets and trousers, with the dark blue to match the Mechanicus element of my force*. This unit would be unlikely to be native to my guard's home planet so I decided not to go the whole hog and convert the gas masks (in my fluff the gas masks are due to them not tolerating other world's air as their own is so weird, rather than needing them because of hazardous conditions).


*Something for
another day