"I wish to acquaint you with some of the occurrences of the present past and future".
- Ned Kelly in the Jerilderie Letter (1879)

I recently got back from a three week trip around Australia with my wife, to visit the various members of her far flung family that have made the continent their home. Now, I don't normally mention holidays on this blog as they don't tend to effect my hobby too much, although a few of my more interesting project ideas have been thought up on long plane rides or on coaches, but on this occasion I came home with two things I was inspired to do; One is for my model railway so has no effect on this little blog, the other, however, was that I wanted to do something based on the Kelly gang. 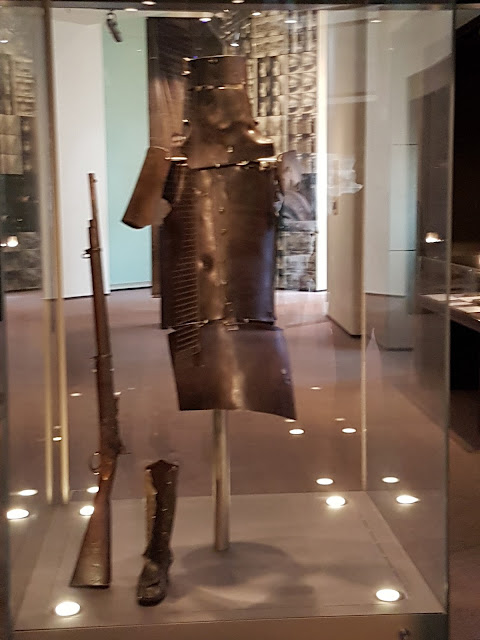 Excuse the poor photo - it was a quick shot taken to send to my Dad back home.

I went out to Oz with a vague knowledge of who the gang were but no real understanding of what they meant to the culture of the country. Whether you see them as heroes or villains, the iconic armour has the same effect on most Australians that the green cap and bow of Robin hood does over here. As we went around the gaol where Ned was hung or the library that stores his armour the story became far more real, while Ned kelly has become a legend, he was a real man first. 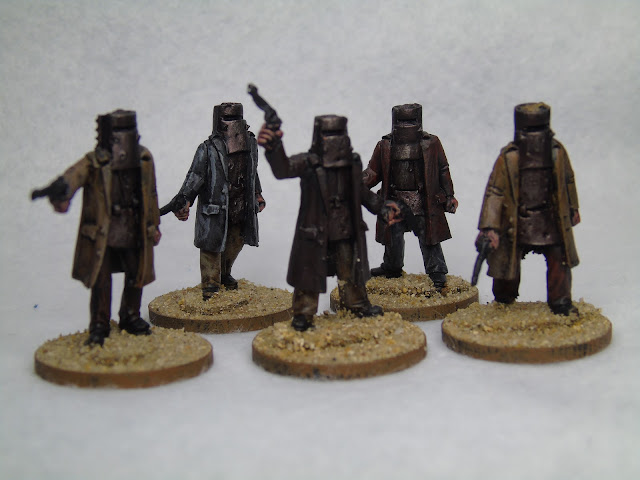 So obviously, the first thing I did once I had got home and settled down again was order the Kelly gang and Down Under supplement for Dead Man's Hand and start painting them in my jet lagged fug. The members of the gang, above, are: Ned Kelly (two guns in the middle), Dan Kelly, Joseph Byrne and Steve Hart, plus a random extra that Great Escape Games includes to make the gang work on the tabletop.
I am really looking forward to getting these guys into a game to see what they are made of, reading the game reviews on other blogs they look like they should be really interesting. Now I am sure I have a 28mm kangaroo somewhere . . .